4 Reel Kings is an online slot machine which comes from the Novomatic stable of fine slot machines. This game comes with a retro fruit theme. As such, when spinning the reels, players can expect to encounter classic fruit symbols such as apples and plums.

To get the action going, all that players need to do is to set in motion the game’s five reels that come with 20 paylines. Players ought to know that as suggested by the game title, there are four reel sets that spin concurrently when playing this slot so it’s rather unique as such. If you like the More Chill slot that has a four screen game feature then you will love this pokie. 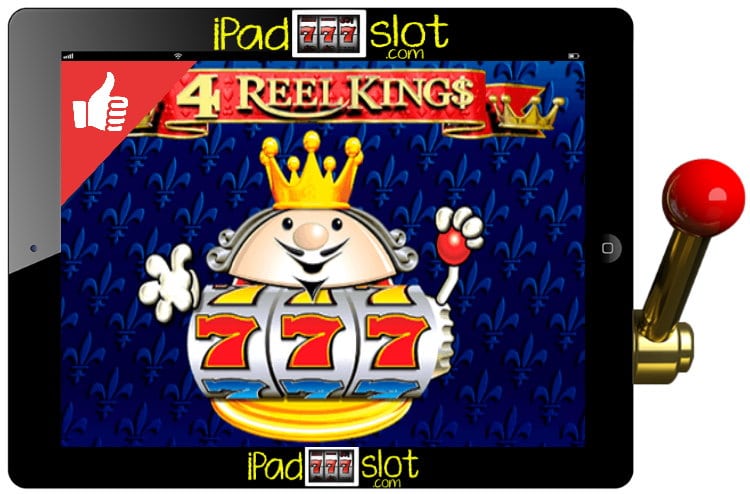 A beautifully designed blue wall provides the background graphics to this slot. The reel sections of all 4 reel sets are covered by white colour. 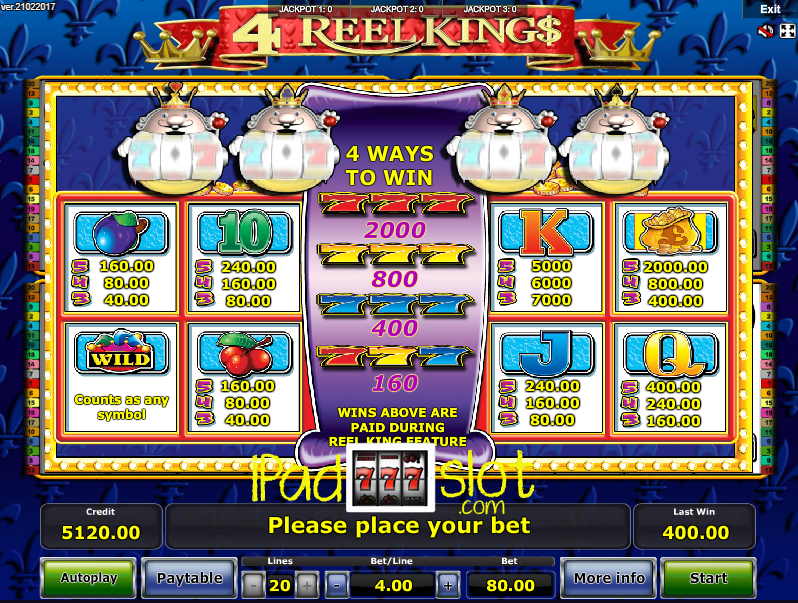 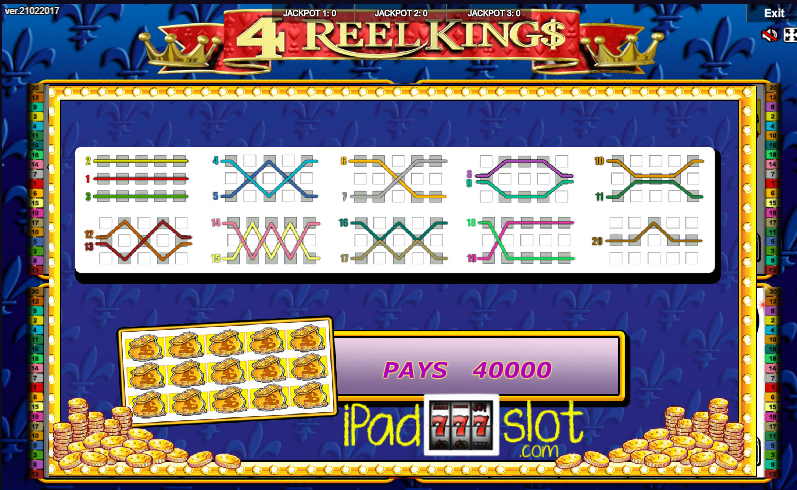 4 Reel Kings is a great game to play for players who love playing slots that come with a classic feel. The RTP of the game stands at 94.00 percent. Out of a 10 point rating, this slot machine gets a 7.5 point rating, it’s a good Novomatic release but not anything special overall. 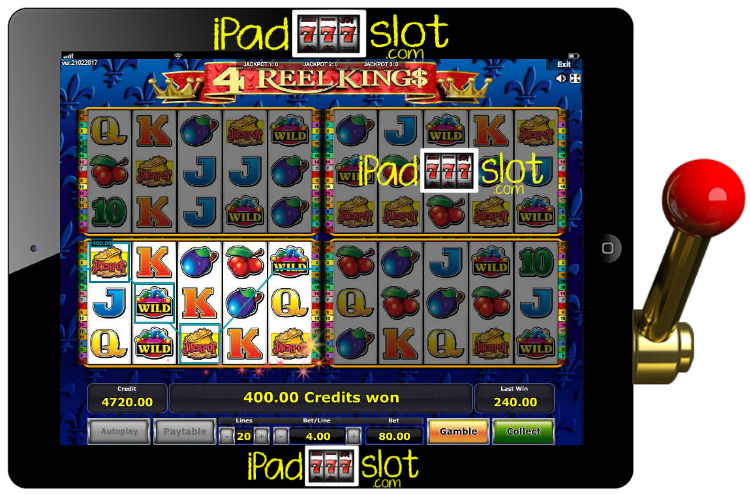 ** Guess what! – The 4 Reel Kings Novomatic slot game or similar themed pokies might be available to enjoy online for free or real cash casino action on your iPad, iPhone, Android, Windows device with or without an app, or on your PC or Mac. Just take a look at our FREE games page here. **

Pearl River Ainsworth Slot Game App Review Pearl River is an aquatic-themed slot game from the Ainsworth stable of super pokies. This slot has a number of elements that make it appealing. First of all, i...
Keystone Kops Free IGT Slots Game Keystone Kops is a game which comes from the IGT company. The slot is a game themed on the famous Keystone Kops movie, a silent movie that aired in the early 19...
Monopoly Millionaire Bally Free Slot Game App Gu... Monopoly Millionaire is one of the many slots from SG Interactive which fuses elements of slots and elements of the popular game of Monopoly into one exciting s...
Eagle Bucks Ainsworth Slots Free Play Guide Are you ready to explore the Native American Wildlife that is stacked with buffaloes, coyotes, and eagles? The best part is - you can now enjoy the ultimate gam...
Big Red Gold Free Slots Game Guide Aristocrat Gaming also developed the volatile game titled Big Red Gold. Coming with an animal theme, this slot game can at times offer excellent rewards from ti...
Review of Betty White’s Twisted Tales Free Slots... This is another of IGT’s movie branded slots that seems to make the grade in this genre very well. This game is inspired by the famous American comic and actres...
Whales of Cash Deluxe Free Slots This is an ocean-themed slot game powered by Aristocrat which stays true to its title in a big way. All the action in this slot game is primarily focused on the...
Zombie Hoard Free Microgaming Slot Game Guide Zombie Hoard is an online slot which comes from the Microgaming company. As one can deduce from the title, this pokies machine comes with a horror theme chocked...
Wicked Tales Dark Red Free Slot Game Guide Wicked Tales Drak Red is an online slot machine which comes from the Microgaming company. This online slot machine comes with a fantasy theme and as such, playe...
Bunny Eggs IGT Slots Game Guide IGT brings us this Easter themed slot where some cute little bunnies offer you a set of yummy Easter eggs, also some impressive rewards can be had while on your...
Elephant King Slots by IGT Game Guide Elephant King is a awesome game made by IGT and is good to play on your iPad or iPhone from our casino guides. It was released in about 2017 ish' for online and...
Family Guy Free IGT Slot Game App Guide Family Guy easily ranks as one of the most popular animated comedy sitcoms that have ever been produced since the year of 1999. Created by Seth MacFarlane the F...
Imperial Wealth Slots App by Konami Guide Imperial Wealth is an oriental themed slot game from Konami which celebrates Chinese traditions, power and strength. For players to start playing Imperial Wealt...
Soul Queen Quad Shot Free Play Guide Love is in the air in this Ainsworth powered iPad slot game. Soul Queen Quad Shot comes with a romance theme. It's not just the stunning symbols on the reels th...
Prosperity Lion PG Soft Online Slot Review PROSPERITY LION QUICK START GUIDE One of the most celebrated Asian Emperors; Jiang Nan once narrated one of his dreams. In his narration, he said that a huge l...
Medusa 2 iPad Slot Game Preview and Free Play Following the amazing success of Medusa, NextGen is offering a sequel to the iPad slot called Medusa II. With this game, the theme remains identical to the orig...
Sirens Free IGT Slot Game Guide When talking about sirens, it's only normal that the first thing that comes to the minds of many are the ‘whistling’ electronic ones used to alert someone. Fas...
Diamond Empire Microgaming Slot Game Guide Diamond Empire is a classic online slot machine that comes from the Microgaming company. As is the norm with classic slots, players looking to play Diamond Empi...
Mega Boy iSoftBet Slots Guide There is competition between slots developers to release different casino slots. Granted, slots developers are exploring all available options to bring out casi...
Shanghai Beauty by Microgaming Slots Review Beauty enchants wherever you are in the country of China, be it the food, the local sights or the women. One such beautiful slot is a Shanghai Beauty iPad slot ...
Tags: 4 Reel Kings Free slot, Novomatic android slots free, Novomatic free pokies, Novomatic iOS free slot app, Novomatic ipad pokies free, Novomatic iphone pokies free, Novomatic iphone slot free, Novomatic pokies app free, Novomatic slot app free, Novomatic social pokies, Novomatic social slots. Novomatic android pokies free,