In the 5 Dragons iPad pokies game from Aristocrat you can experience the might and majesty of these mythical reptilian creatures in one slot laden with eye candy graphics. It leans more towards Chinese depictions of dragons, though, and coupled with other animal symbols that are said held in high regard in the beliefs of the said culture.

Most of them are associated with luck and fortune, which is why anyone who is staunch believer of these motifs should certainly choose this slot over others. The 5 Dragons slot is 100% FREE to play on iPad, iPhone, Android, Mac & PC at the Heart of Vegas site. Jump pop on over to have spin today! 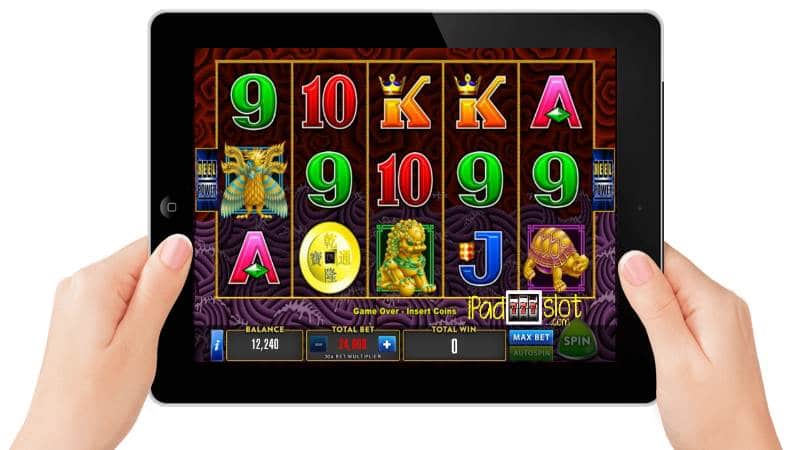 If you love FREE Aristocrat  slots make sure you try our FREE iPad pokies games here.

A standard 5 reels and 3 rows make up this slot game but with an apparent absence of paylines. Instead, players can either choose to bet on number of reels by clicking on the buttons 5 Reels and 5 Reels + Extra; this would affect your total bet per spin.

Pressing Bet One lets you set your bet per reel. Taken note that wins are counted beginning from left to right, and wins that occur simultaneously on different paylines are added. Only highest winning combination are considered per payline. 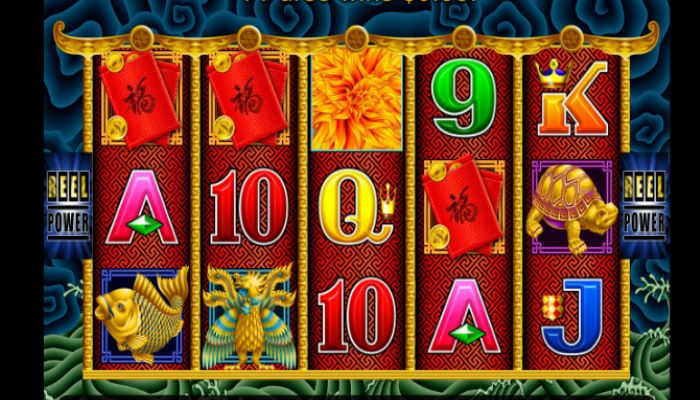 Many Dragon themed slots have been released over the years like Ainsworth’s Dragon Lines, Microgaming’s Dragonz, Bally’s Dragon Spin or IGT’s Water Dragons. We rate 5 Dragons right up there in quality compared to these pokies mentioned. The 5 Dragons iPad game is usually available at the Heart of Vegas free Aristocrat pokies casino on Facebook.

Codfather Slot by NextGen Game Guide Get ready to enjoy an underwater themed slot game from NextGen. The Codfather is a 20 payline game that features free spins and great wins that can be completed...
Golden Wolves Konami Slots Guide Golden Wolves is an animal themed iPad slot game powered by Konami. This game takes the player inside an arctic forest where there are lots of wolves, eagles, a...
African Dusk Mr. Cashman Free Slots Guide African Dusk Mr Cashman is an African themed game focusing primarily on African wildlife. This is an Aristocrat powered video slot game which comes with five re...
Icy Gems Microgaming Slot Game Guide Icy Gems Slot Game Review Icy Gems is a nice slot game which comes from Microgaming and we rate it as a must play game for real money gaming. Icy Gems comes...
Rocket Man Free IGT Slots Game Guide Rocket Man is a cracker iPad compatible slot game of IGT which has created a new type of genre in the form of superhero-themed game. This superhero themed game ...
Sun Chief Slots Free & Real Money Ainsworth... Ainsworth never lets down its customers and proved once again with the Sun Chief iPad slot game available at the Players Paradise casino. You can have adventure...
Cats IGT Slots Free Play Guide Players who have visited land-based casinos to play slot games will know that one of the most popular and most played slot games is the Cats slot machine. The g...
Wolf Run Slots Game By IGT Free Play Guide Wolf Run is a Wolf-themed slot game from IGT. The game has 5 reels and 40 pay lines. The players can get to bet on a minimum coin size of 1 and this can go up t...
Helen of Troy Aristocrat Free Slots Game Guide It's time to embrace the old when you play this Aristocrat powered video slot. Set in medieval Europe where Helen of Troy was one of the most feared but wisest ...
Konani Free Slots App Lotus Land Review Lotus Land is an oriental themed slot game developed by world-renowned Japanese game developer Konami. The primary focus of this slot is on animals that are wid...
Mega Hearts Free Slots App by Ainsworth Mega Hearts is a romance-themed iOS compatible slot app from the Ainsworth stable of amazing games. This pokie comes with two incredible progressive jackpots wh...
Beautiful Bones Free Microgaming Slot Beautiful Bones is an online slot machine from the Microgaming company. Play for fun or real casino cash subject to your location. This game is a lot like th...
Dolphins Pearl Novomatic Free Slots App Guide Dolphins Pearl comes from the Novomatic stable of awesome iPad compatible slot machine games. This is an aquatic-themed slot game whose primary focus is on the ...
Go Bananas iPad Slot Machine Review and Free Pla... Many players will go ape over Go Bananas and the entire iPad slot machine game is based on monkeys as you already worked out. The symbols that are used on the r...
Golden Peach by Aristocrat Free Slots Guide If you are an avid fan of Aristocrat free iPad slot games, you would have taken virtual trips to various destinations on the game reels already at Heart of Vega...
101 Lions The Best Free Lions Themed Slots Game 101 Lions by Intervision Gaming puts the spotlight on our very own king of the jungle right from your iPad. With stellar imagery that evokes the exquisite beaut...
Thai Sunrise by NextGen Gaming Slots Guide Thai Sunrise by NextGen Gaming is a virtual journey to Thailand and allows the players to witness some of the most regular scenes to be found in a Thai city lik...
5 Dragons Deluxe Slots Free Play Guide If you really love Asian themed slot games, then "5 Dragons Deluxe" will be an appropriate game for you. This free or real money iPad slot game is totally inspi...
Super Times Pay by IGT Free Slots Guide Super Times Pay is a popular online slot machine game developed by IGT and is iPad compatible. This game provides a virtual trip to the famous Las Vegas, the mo...
Legends Of New York by Ainsworth Real & Fre... Legends of New York slot is one of a kind slot machine iPad compatible game developed by Ainsworth, which the fans say it's one of their best. The game features...
Tags: 5 Dragons free iPad pokies, 5 Dragons free iPad slots, Aristocrat free iPad pokies, Aristocrat free iPad slots, Aristocrat Free Slot App Article Tags,