From bedtime stories that our parents or guardians used to tell us when we were young, stories with mythical creatures commonly known as dragons used to pop up more often than not.

From the tales, our imaginations used to run wild and we would think of these mythical creatures as huge beasts that could spit fire while at the same time run as fast as the speed of light. This slot has all the above and more themed into this cracker Aristocrat iPad slots game below aka 5 Dragons Rapid. 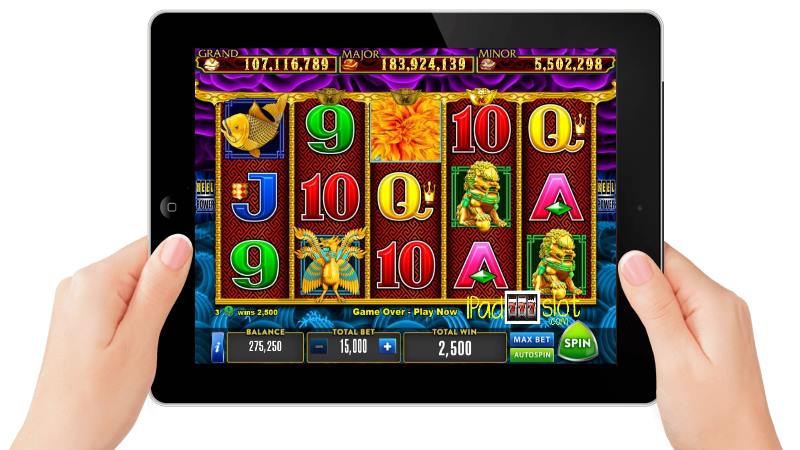 In this Aristocrat powered game, Aristocrat rekindles our childhood memories as it brings a slot game that includes everything that we used to think about dragons when we were young; fire spitting creatures that are rapidly fast. To start the adventure in this game, all one needs to do is to spin the game’s five reels that come with 243 paylines.

The background of this slot showcases an upper half covered by a purple colour and a bottom half covered by a blue colour. On the reels, there is a maze-like pattern that’s covered in red. This is one of Aristocrat’s most sexiest slots in the eye candy rankings.

On the reels, there are the following symbols: different coloured dragons, tiger, koi, envelope and turtle. These high-value symbols are also complimented by low-value symbols in the form of traditional card symbols.

This is a great iPad slot game from Aristocrat Gaming. though the base game is quite entertaining and absolving, the majority of the action and fun (in terms of payouts) comes when the player triggers the bonus rounds. Overall, this game gets an 8.5 point rating out of 10 points and you can enjoy slots from our real money Aristocrat casino reviews or just some free fun at the Heart of Vegas casino. Enjoy 5 Dragons Rapid today!

Wacky Races Bally Free Slots App Wacky Races is a branded slot game developed by Bally Technologies. However, odds are, not many people may know where the game was adapted from if they were bor...
Disco Spins iPad Slot Game Free Play & Revi... Put on your bright clothes and take a trip back in time too enjoy the 80's era with Disco Spins, an iPad slot created by Net Entertainment. This game is fully t...
Twilight Spirit Aristocrat Free Slots By just watching movies and films that depict life back in the day, many people conclude that life in days gone by was better, happier, and easier well no annoy...
Lightning Box Five Pirates Free Slot Guide Five Pirates is a game which comes from the Lightning Box company. Players looking to play this pirate-themed online slot will find themselves conspiring with a...
Golden Chief Barcrest Free Slots Guide There was a time when the title ‘chief’ was enough to create fear in anyone of lower ranks in the pecking order of the tribe or community. This is not to say th...
Leapin’ Leprechauns Barcrest Game App Leapin' Leprechauns is part and parcel of the Rainbow Riches genre of iPad games, a game series developed by SG Interactive in the Barcrest Studio. This online ...
Desert Spirit IGT Free Slot Game Guide Desert Spirit from IGT is a slot game that takes you to the Southwest, players get up close with native Americans on the reels. Fast Start Desert Spirit IGT Fr...
Williams Giants Gold Free Slots Game App In recent times, SG Interactive in the Williams Studio has created many great iPad and iPhone slots that come with the colossal reels feature. Giants Gold is on...
Ocean Magic IGT Free Play Slots Game The title of this IGT powered game does reveal to the player what this game is all about. Ocean Magic is an aquatic themed slot game which takes place in an und...
Aristocrat Monkey King Free Pokies Game Guide Linked to the Lucky Fortune link progressive jackpot, you are bound to want to unlock one of the special features which give you the opportunity to win the ever...
Bally Quick Hit Super Wheel Wild Red Free Play G... Quick Hit Super Wheel Wild Red comes from the Bally / SG Interactive company. The game comes with a retro theme and as such, gamers looking to play this online ...
Konami Sparkling Roses Slots App Guide Sparkling Roses is a western themed slot game designed by Konami who are just one of the best companies that produce free and real money mobile pokies apps. Pla...
The Legend of Big Foot Free Barcrest Slots Guide Legend has it that in years gone by (and still to this day), there is a huge creature named Big Foot or Sasquatch who roams around North American forests. In a ...
Burning Desire Microgaming Slot Game Guide Developed by Microgaming, Burning Desire is an online video slot machine for players who love old fashioned style pokies. It has classic icons and not character...
Solstice Celebration Slots Game Review Solstice Celebration is a bright summer themed slot game developed by Konami. Players who are looking to play this slot game can do so either on the desktop or ...
The Huntress Aristocrat Slot Free Play Guide The Huntress is an free online slot machine which comes from the Aristocrat studio. Just as can be deduced from the title, this online slot machine does come wi...
Lucky Staxx Free Playson Slot Game Guide Lucky Staxx Slot Game Review Lucky Staxx is a simple fruit themed slot by Playson, The game comes with five reels and 40 paylines, it no real bonus features to...
Volts and Bolts Shuffle Master Free App Guide Just as you can expect by just reading the title of this SG Interactive powered slot game from Shuffle Master, your adventure in Volts and Bolts will be nothing...
Sugar Pop iPad Slot Game Review and Free Play Those that are already addicted to Candy Crush will be thrilled with this new slot game from Betsoft. Sugar Pop is a 3D slot game that is one of the most colour...
Ladies Nite Online Slot Review Produced by Microgaming, Ladies Nite is an exciting game with heaps of vivid graphics when the girls get the party started! With a nightclub type of theme, the ...
Tags: 5 Dragons Rapid Free Slots, Aristocrat free iPad pokies, Aristocrat free iPad slots, Aristocrat Free Slot App Article Tags,