The American Dad! TV show has been nicely themed into this free slot game from Playtech. This 40-payline and 5 x 3 reeled branded game is going to keep you smiling as you play, we promise. You can win all sorts of many bonus features that provide extra wilds, free spins and big multiplier payouts.

NB: You can take a free spin on your iPad, iPhone or Android on American Dad! right HERE. 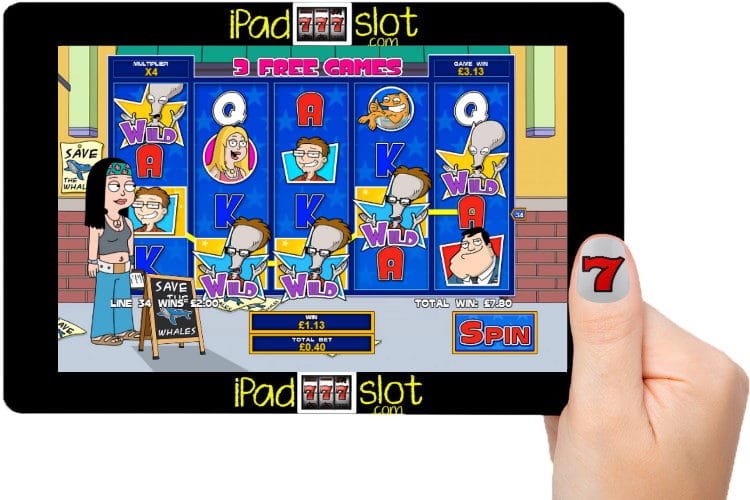 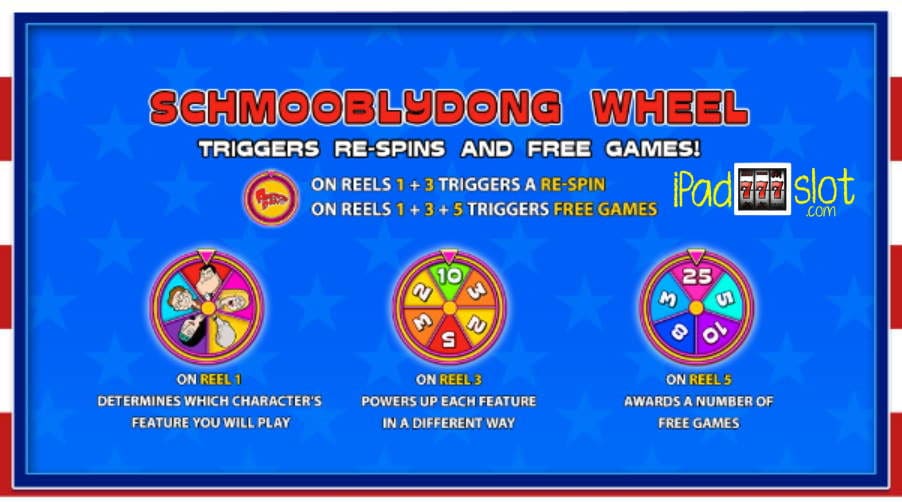 The Schmooblydong Bonus Wheel symbol:  if you score it simultaneously on reels 1 and 3, you will win a re-spin with the opportunity to score the symbol on reel 5 so you will activate the free spins bonus.

Characters and their features in the bonus 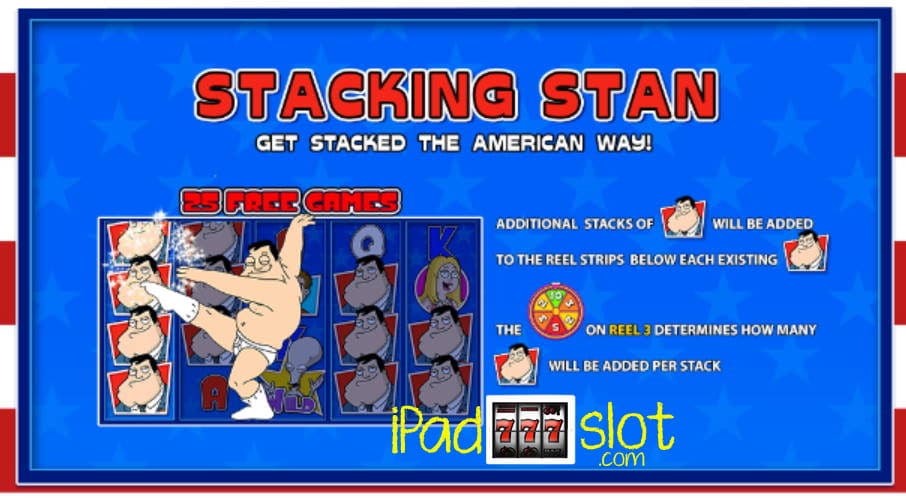 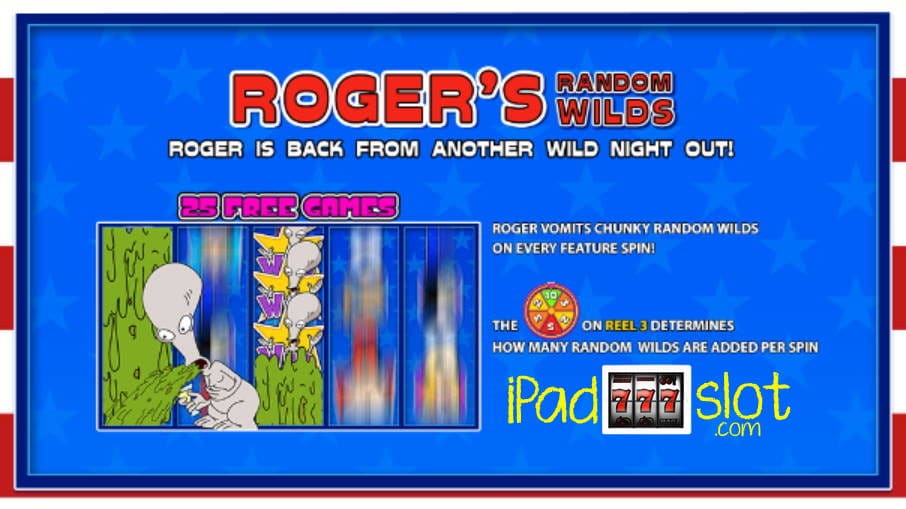 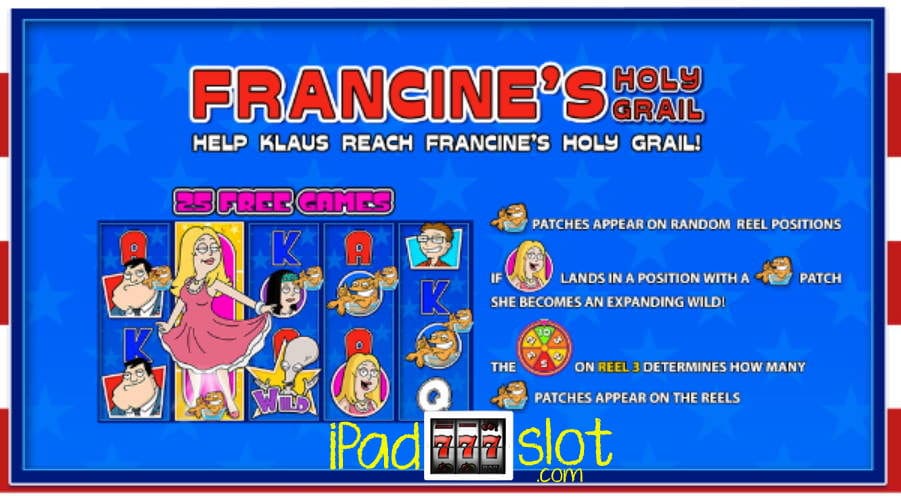 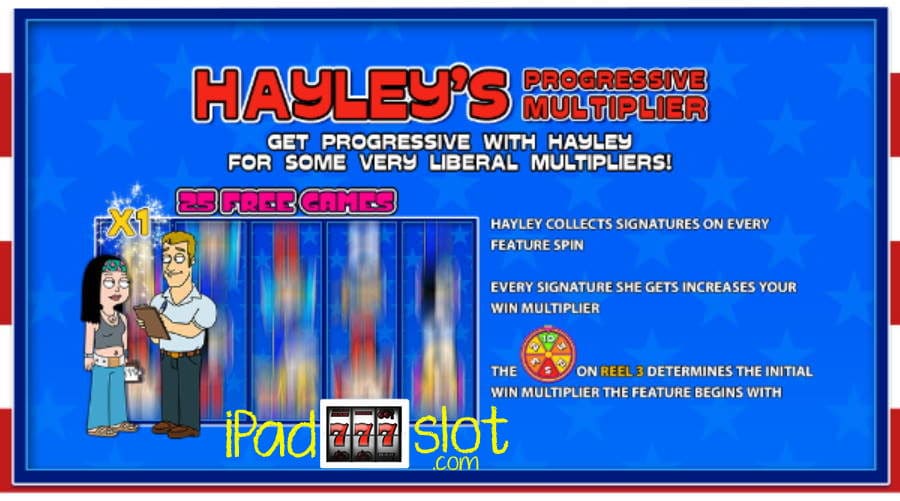 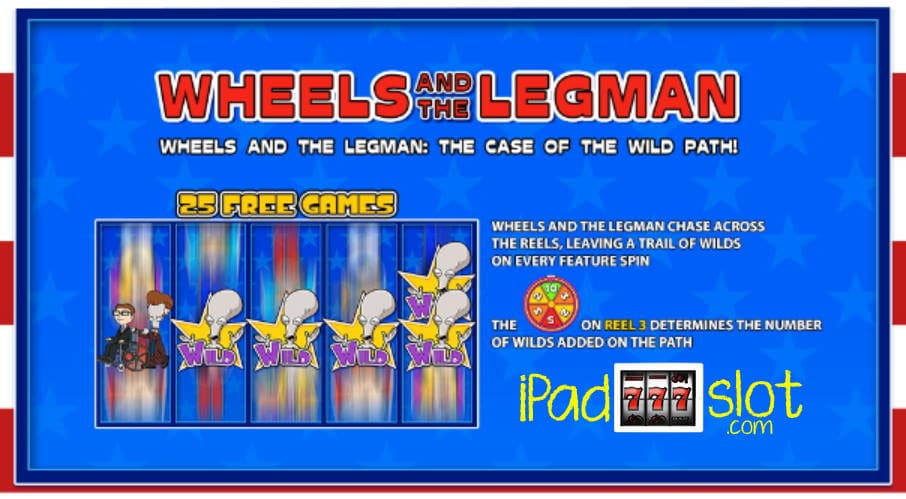 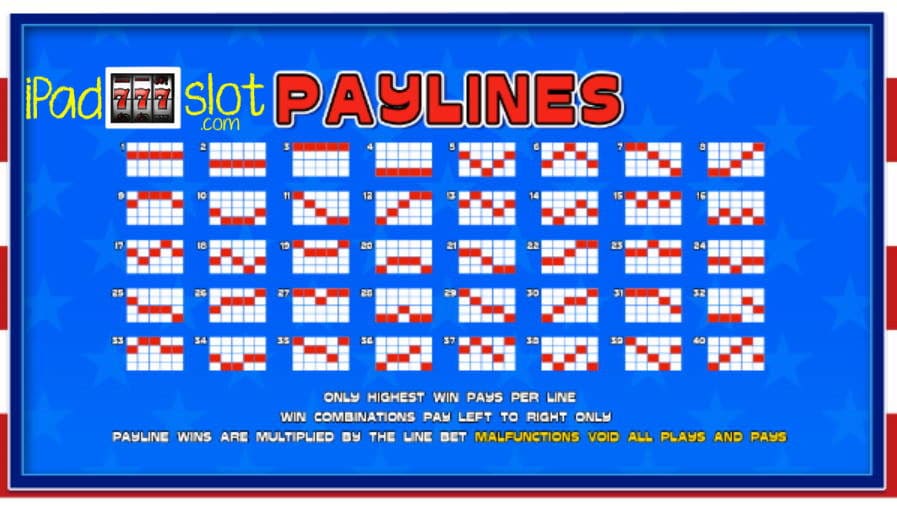 About the American Dad TV Show

In our opinion out of the most popular Seth MacFarlane animated TV shows including Family Guy and The Cleveland Show, American Dad! Is just is the pick of the shows to watch.

The show follows the life and times of an American CIA agent Stan Smith, who resides in Langley Falls, Virginia with his small family.

Stan lives with his stereotypical housewife Francine, his hippie daughter Hayley, the nerdy son Steve, stupid son-in-law Jeff, an East-German in the body of a goldfish called Klaus and a character called Roger the alien.

The American Dad! Fox TV show was first released on February 6, 2005. This is not for the kids or any adult that takes life a little too seriously.

Remember it’s just TV ? you will either love this show or hate it. 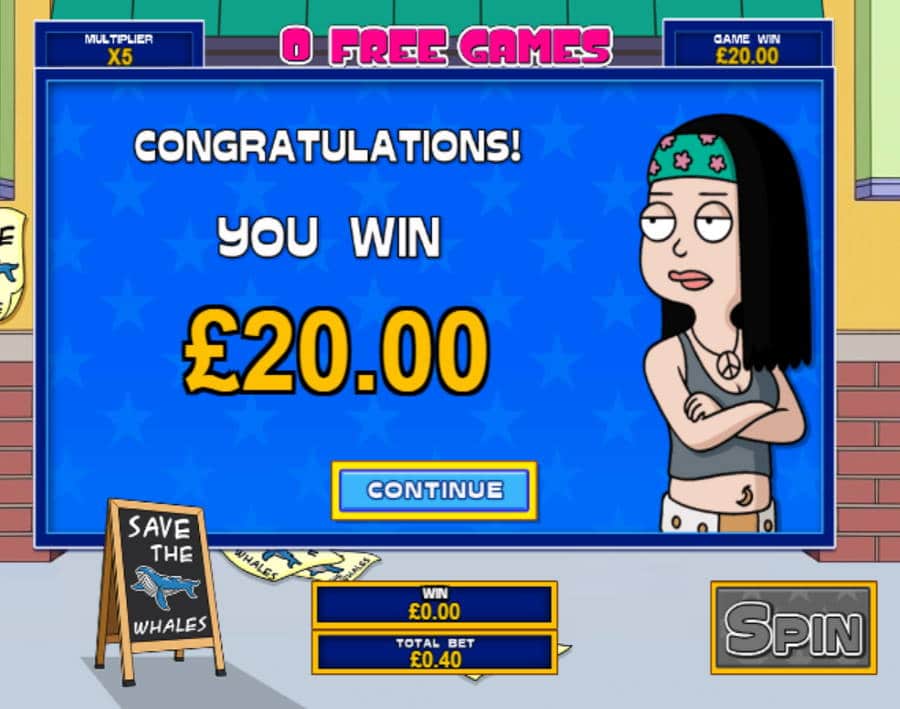 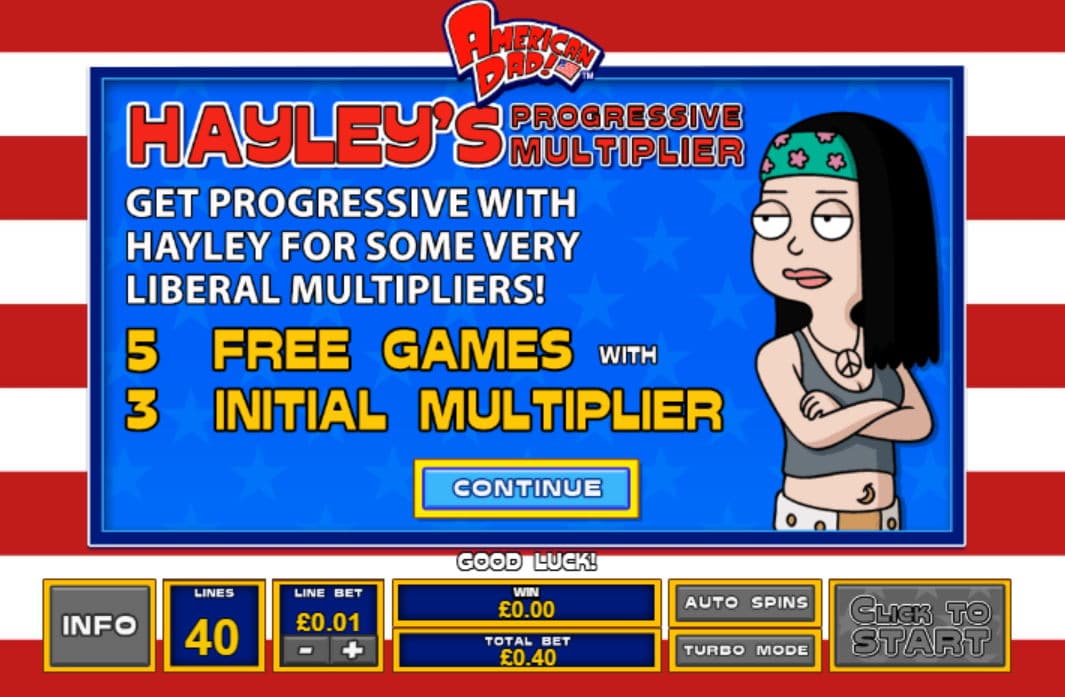 Best of Roger Compilation Below 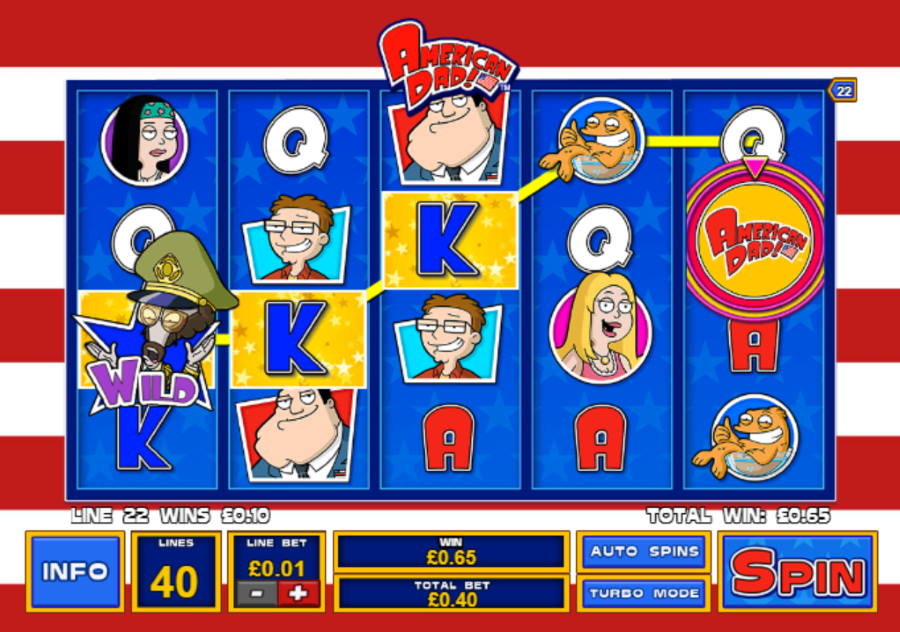 Mega Boy iSoftBet Slots Guide There is competition between slots developers to release different casino slots. Granted, slots developers are exploring all available options to bring out casi...
Mild Rockers Lightning Box Free Slot Game Guide Mild Rockers is an iPad compatible slot which comes from the Lightning Box stable. This game comes with a clubbing theme meaning that as players spin the reels,...
Nautical Treasures Slots Free Play Guide Nautical Treasures from Aristocrat is a iPad slot game with an aquatic theme focused on ocean discovery and adventure. The game takes one deep into the sea wher...
Buffalo Moon By Aristocrat Free Play Guide Buffalo Moon Slot is an interesting iPad slot game designed and developed by Aristocrat. It's inspired by the Native American culture where buffaloes are consid...
Mystic Fortune Habanero Slot Game Guide Mystic Fortune Slot Game Review The Habanero 5 x 3 reel slot game Mystic Fortune comes with 25 paylines and it's themed about China. Slot Layout The culture ...
4 Reel Kings Novomatic Free Pokies Game Guide 4 Reel Kings is an online slot machine which comes from the Novomatic stable of fine slot machines. This game comes with a retro fruit theme. As such, when spin...
Aristocrat Panda Magic Free Slots Game Panda Magic is an online slot machine from Aristocrat which comes with an animal theme. As can be deduced from the slot’s title, the animal theme in Panda Magic...
Golden Eagle IGT Slots Game Guide The eagle is one of the most sacred animals in the world and most religions and cultures regard an eagle highly. In Asia, the eagle symbolizes courage, strength...
Sushi Yum Yum Free IGT Slot Game Guide Sushi Yum Yum is an online slot machine which comes from the IGT company. As one can deduce from the title, this game is food-themed and it pays homage to sushi...
Legends Of New York by Ainsworth Real & Fre... Legends of New York slot is one of a kind slot machine iPad compatible game developed by Ainsworth, which the fans say it's one of their best. The game features...
Dancing in Rio Williams Free Android Slots App Brazil is known for many things but there are actually two things that have put her on the global map. First, there is soccer, Brazil is known as the home of so...
Bombay Slots Game by IGT Free Play Guide This Indian themed slot from IGT borrows much of its inspiration from other IGT themed slots as the setting is set against a wealthy themed tone. This game take...
Konani Free Slots App Lotus Land Review Lotus Land is an oriental themed slot game developed by world-renowned Japanese game developer Konami. The primary focus of this slot is on animals that are wid...
Betsoft More Gold Diggin Free iPad Slot Review One of the latest and most innovative iPad slot games to date, More Gold Diggin pokies by Betsoft introduces a fresh twist to slot games by incorporating stunni...
Siberian Storm Dual Play Game Review Siberian Storm Dual Play is an animal-themed slot machine game that features a unique theme of Siberian Tigers. IGT gaming has taken these types of genre very s...
NextGen Tianlong Slots Game Review The Dragon is a sacred symbol in the oriental way of culture because it is thought to be lucky for the people. This iPad slot machine has been developed jointly...
Forbidden Dragons WMS Slots Casino App Forbidden Dragons is an iPad, iPhone and Android slot game app which comes from the SG Interactive stable of terrific games. The game was originally created for...
Dark Ninja Slots by Zeus Play Game Guide The Dark Ninja by Zeus Play is an above average iPad free or real money slot machine game which is based on the lives and surroundings of a Ninja. Right from th...
Lucky Larry’s Lobstermania 3 Free Slots Ga... Luck Larry's Lobstermania 3 is the third slot game in the series. Like the previous Lobstermania games, this awesome iPad and iPhone compatible slot is develope...
Capital Gains Free AGS Slot Game Guide AGS is one of the very best game developers  of slot machines for brick and mortar casinos in the USA. One of the game developer’s trademark slot machines found...
Tags: American Dad! Free pokies, American Dad! Free Slot, Playtech free iPad slots, Playtech iPad pokies,