This slot developed by Bally is a branded game based on the popular comedy movie series directed by Adam McKay starring Will Ferrell as Ron Burgundy the lead news reader. Ron is a egocentric legend who is self centered, crude and dominating of sorts.

Set when back in the day men were men and women should not be heard, well that’s until Veronica Corningstone played by Christina Applegate started working in the news room. You can have a FREE spin on here on Anchorman The Legend of Ron Burgundy.

The game is based on the movie “Anchorman” set as a San Diego news TV show right from the good old days of the 70’s era which is was not very politically correct in any sense of the word. I just love any movie with Will Ferrell and Steve Carell, this movie is good to watch several times over and over as the more you watch it the funnier it seems to get. Try some of our free Bally slots right here. 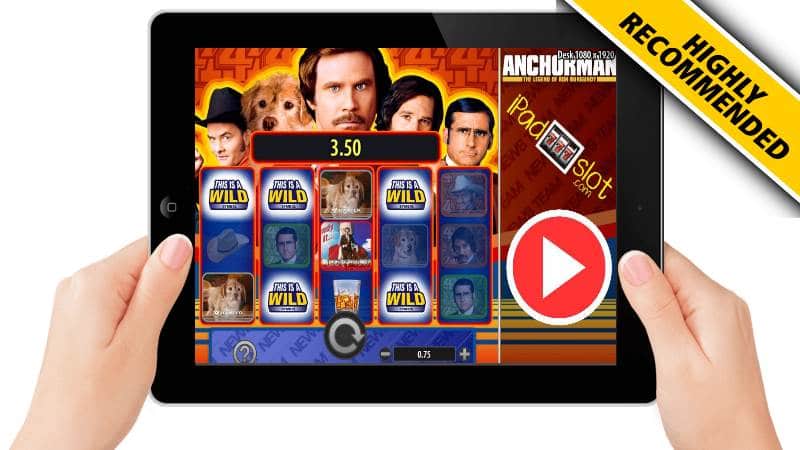 ** The Anchorman the Legend of Ron Burgundy slots Bally game might be available to play for free or real money on your iPad, iPhone, Android, Windows device, PC or Mac. Just take a peek at our online casino reviews here. **

In the background variation of different colors are used with red being dominant, a news channel like feel has been been created quite well. There is “News Team” repeatedly written in the background as well. On the left side are betting controls and in the bottom is mentioned the balance. Anchorman is a pokie with 5 reels and 3 rows with an additional 25 paylines in the base game level. But look out for Ron´s Giant Free Spins bonus feature as the number of paylines changes and offers a huge 117 paylines. On the reels symbols are used which represent different characters, items or aspects of the movie. These include a symbol of Ron Burgundy himself, Brick Tamland, Brian Fantana, Champ Kind, Baxter the dog, a glass of scotch, a van, a piece of glasses and symbol a cowboy hat. There are no traditional poker symbols in this game. 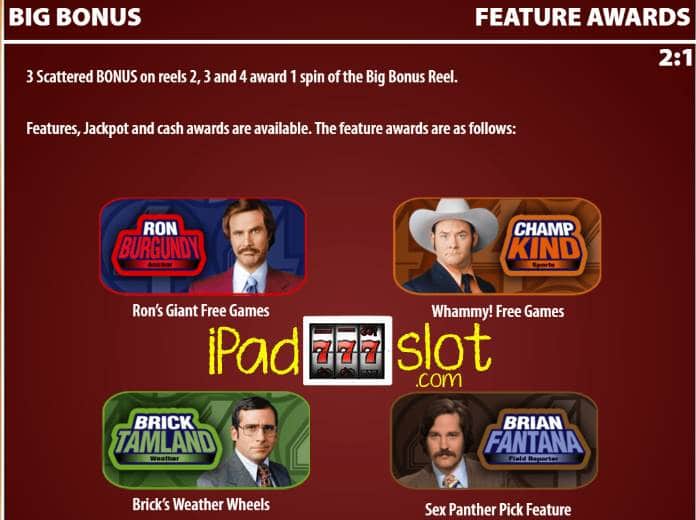