Lightning Blast Pacific Princess is an online slot machine powered by Aristocrat. This game falls under the ‘Lightning Blast’ range of pokies, an Aristocrat series popularly known for its highly lucrative progressive jackpots that can be won.

As is the case with all other slots that fall under this series, Lightning Blast Pacific Princess also comes with four progressive jackpots. Players looking to play this free online slot machine can do so by simply setting in motion the game’s five reels of south pacific islands excitement and colour. 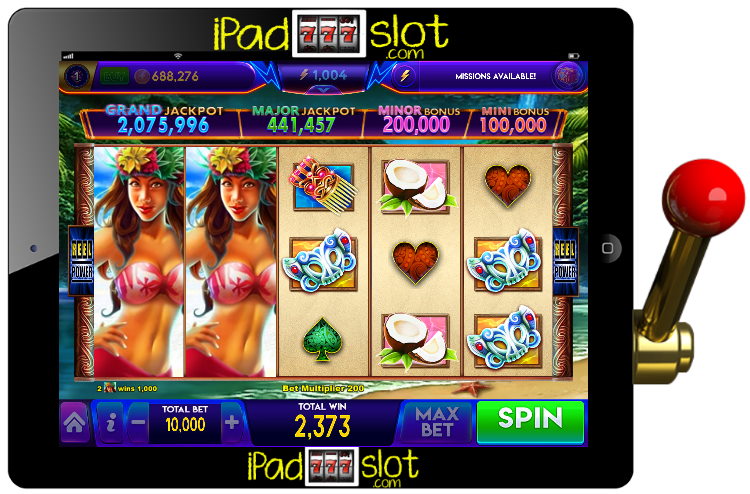 ** The Lightning Blast Pacific Princess slot from Aristocrat and similar style pokies machine may be on our site to play for 100% mates rates (free) or real casino moolah jackpots on an iPad, iPhone, Android or Windows powered gadget, you can just have a fun play crack on a PC or Mac computer today from select online casinos also. Just take a peek at our FREE games page here. **

A coastal landscape provides the background graphics to this online slot machine. The reel section is covered by a solid light brown colour.

When spinning the five reels of Lightning Blast Pacific Princess, players will find the following symbols on the reels: colourful ocean wave, snail-like creature, purple orb, beautiful princess, a comb, a face mask, fruit cut in half, a purple flower and card suits.

Lightning Blast Pacific Princess is quite an exhilarating slot to play thanks to the incorporation of a multiplicity of bonus features and 4 jackpots prizes. It’s available for free play at the Lightning Link casino on FB. Out of a 10 point rating, this pokies machine gets a 8 point rating.

Microgaming Win Sum Dim Sum Free Slots Microgaming developed this exciting game called Win Sum Dim Sum, which is based on a Chinese restaurant theme and style. It consists of pay lines of 9, rows of ...
Dragon Spirit Online Slot Review This dice-themed slot from EGT takes you right into ancient China with its graphics and soothing background music. By merging dice-throwing and Chinese wildlife...
Lightning Box Chicken Fox Free Slot Game Guide Chicken Fox is an anime-themed game which comes from the Lightning Box company which is an Australian company. As can be deduced from the title, the protagon...
Winning Wolf Free Ainsworth Slot Review Winning Wolf, developed and launched by Ainsworth is a 5 reel slot providing players with 100 paylines of excitement. It's another Wolf genre pokies machine, if...
Big Catch Novomatic Slots Game Preview Big Catch is a nautically themed iPad slot game app which comes from the Novomatic company. In this game, players can expect to encounter different species of a...
Aristocrat Mystical Sands Free Slots App Guide Mystical Sands is an Egyptian themed iPad compatible slot machine game app from the Aristocrat stable. You may be wondering how the title relates to the game’s ...
Amazon Temple Free Slots Game Review The Amazon from tales we hear from those who had the privilege to visit the place is a huge jungle with densely populated trees, evergreen vegetation and also a...
A While On The Nile Free Slots Guide A While On The Nile online slot game is developed by NextGen Gaming. It is a 5 reel and 50 pay-line slot that is iPad ready to go. This game is rich in color an...
Midnight Stampede Super Stampede Free Play Guide There is a negative connotation that comes with the word ‘stampede’. Most of the time when this word is used, it is when there is a tragedy of sorts. However, A...
Sacred Guardians The First Unicorn Free Pokies G... Many people around the world believe that certain animal special in the way or another. These animals or creatures are seen as a sign of luck, power, wisdom, an...
Magic Rewards Ainsworth Free Slots App Guide Magic Rewards is a magic-themed slot game developed by Ainsworth as you already worked out. When players load this game, they assume the role of Dynamo, a power...
Kitty Glitter Slots Mobile Free Play Version If you need a pleasant distraction when you are feeling a little bored, then you need to lay your hand on the five reel, 30 pay line, Kitty Glitter online slots...
Mighty Bison Slots Game Review This is yet another animal themed slot game from IGT. This slot mostly features the American bison though there are also other animals namely the wolf and a scr...
Acorn Pixie Slots Free Play Guide This slot game is very good and well worth a spin on your iPad or iPhone for free or real dosh from our reviewed online casinos. The pixie in the game will use ...
Eagle Bucks Ainsworth Slots Free Play Guide Are you ready to explore the Native American Wildlife that is stacked with buffaloes, coyotes, and eagles? The best part is - you can now enjoy the ultimate gam...
Crystal Rift Microgaming Free Slot Game Guide Crystal Rift is an online slot machine which comes from the Microgaming company. As players can probably deduce from the title, this game comes with a crystal r...
Flame of Fortune Barcrest Free Slots Game The house is burning down in this iPad and iPhone compatible slot game. However, while with every other fire this would be a bad or rather disastrous thing, the...
Cash of Kingdoms Free Microgaming Slot Cash of Kingdoms is an online slot machine which comes from the Microgaming company. This game comes with a fantasy medieval theme and as such, it’s a great slo...
Valkyrie Fire Barcrest Free App Review Valkyrie is a Norse mythology themed iPad and iPhone compatible slot which comes from the SG Interactive stable of Barcrest games. This slot has a special focus...
Balloonies iPad Pokies Machine Review & Fre... Would you mind a trip down memory lane? Of course you wouldn’t. Remember balloons and how elated you felt playing with them in your toddler days. Nowadays, kids...
Tags: Aristocrat android slots free, Aristocrat free iPad slots, Aristocrat free pokies, Aristocrat iOS free slot app, Aristocrat ipad pokies free, Aristocrat iphone pokies free, Aristocrat iphone slot free, Aristocrat pokies app free, Aristocrat slot app free, Aristocrat social pokies, Aristocrat social slots. Aristocrat android pokies free, Aussie free pokies, Aussie pokies, Lightning Blast Pacific Princess,