Mystical Sands is an Egyptian themed iPad compatible slot machine game app from the Aristocrat stable. You may be wondering how the title relates to the game’s theme; well, the connection is simple, mystical sands in this game refers to the sand which was used in making blocks that were later used in building the ancient pyramids of Egypt.

As such, when playing this game, players have the chance to collect their own mystical sands which they can use in making their own blocks and subsequently, their own pyramids. To start one’s adventure in this slot game, players need to spin the game’s five reels that come with 30 paylines.

In the background of this slot game is a vast expanse of desert land full of sand. In a distance, players can see two huge pyramids on both the left side and the right side of the screen. The reels of this game are covered by a solid blue colour. 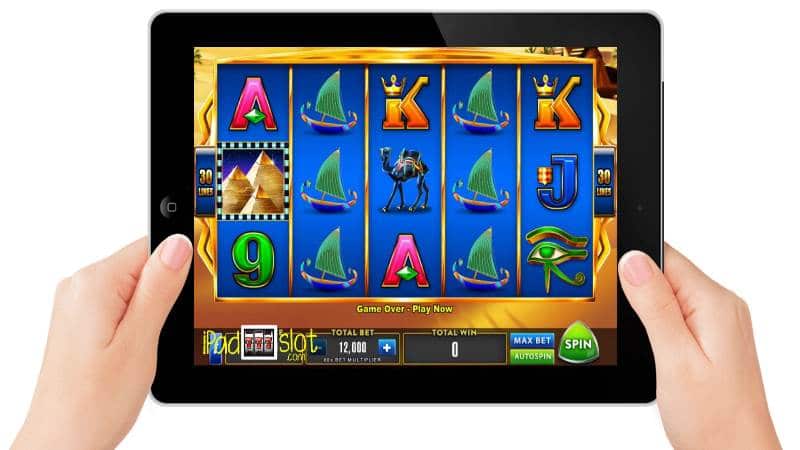 The symbols that players will find on the reels when playing this game include the lion face, a cross, eye of Horus, a camel, a small ship and traditional card symbols.

Fans of Egyptian themed slot games will definitely find this online video slot from Aristocrat very appealing at Heart of Vegas. Out of a 10 point rating the Mystical Sands iPad slot app gets an 7.2 point rating overall.

Rainbow Riches Drops of Gold Free Barcrest Slot SG Interactive continues dropping some captivating titles in the Rainbow Riches slot series and this time around, SG Interactive has released Rainbow Riches Dro...
Ainsworth Big Thunder King Strike Pokies Free Pl... At the social media gaming platform of Players Paradise casino, you can play this latest iPad pokies game that's developed by Ainsworth. In Big Thunder King Str...
Queen Of The Nile 2 Free Play & Review A superb sequel to the classic Queen of the Nile from gaming giant Aristocrat, here comes Queen of the Nile 2. This slot machine takes you down the planets long...
Novomatic Katana Free Slots Game Guide Katana is a Japanese themed iPad slot game app which was has been developed by Novomatic. In this slot game, players are introduced to a once powerful Japanese ...
Sky Rider Golden Amulet Free Slots Guide Sky Rider Golden Amulet is a western themed iPad compatible slot game from Aristocrat. This game features elements from ancient Europe. The game features five r...
Mystic Panda Free Slots App by Ainsworth Guide Mystic Panda is an oriental themed game from the Ainsworth range of awesome iPad compatible slots.  Mystic Panda can be accessed both on the desktop and also on...
IGT Shamrockers Eire To Rock Free Slots Game Gui... IGT got in sync with modern players needs when they released Shamrockers slot machine. It is a cool 5 reeled machine that features 20 fixed paylines. It is musi...
Golden Princess Free Slots Game Guide In the old days gone by monarchs were the most prominent rulers in political systems. Kings, Queens, Princes and Princesses possessed all the power and wealth b...
Dice Tronic Free Zeus Play Mobile Slot Guide Zeus Play’s Tronic is a good slot machine game, which features dices as the main characters. The payouts are over the appearance of these dices. The game contai...
Sacred Guardians Slots Free Play Guide Sacred Guardians is a awesome animal themed slot game from Aristocrat. This is a 4 level progressive game which features some cute animals on the reels. Anyone ...
Ellen’s 12 Days of Giveaways Free Online S... This is a XMAS holiday-themed slot game from IGT which borrows all of its features from the annual, ‘Ellen’s 12 Days of Giveaways’ shows where the iconic talk s...
Dolphins Pearl Deluxe Novomatic Free Play Guide Marine life is the central theme of Dolphins Pearl Deluxe online slot as you expect, and players who love a slot game that leans more towards these beloved sea ...
Aristocrat 2Can Free Play Slots Guide 2Can is a Aristocrat free iPad slot game that revolves around the intriguing and colorful Toucan Bird. The name as you can see is twist on the regular spelling,...
Monopoly Bring The House Down Barcrest Free App It's time to ‘bring the house down’ and take all the money in this SG Interactive powered slot game from the Barcrest Studio of popular online free and real mon...
Joe Blow Gold Free Aristocrat Pokies Game Guide Joe Blow Gold is an Aristocrat powered online pokies machine machine. This slot comes with a mining theme so if you like Where's the Gold then this is your game...
Mighty Bison Slots Game Review This is yet another animal themed slot game from IGT. This slot mostly features the American bison though there are also other animals namely the wolf and a scr...
Jungle Rush Aristocrat Slot Free Play Guide Jungle Rush is a must play online slot machine which comes from the Aristocrat range of awesome free online pokies games. Quick Start Guide Jungle Rush Free Po...
Queen of the Nile Free Play Review Egypt is the orient of mystery, the land of colossal Pyramids & the fertile valley of Nile River. This orient is also famous for their well-known queen, Cle...
5 Dragons Gold Free Slots Game Review The title of this Aristocrat video slot does much in revealing the theme of this game as you guessed. 5 Dragons Gold is a mythical themed game that largely cent...
Wolf Rising By IGT Slots Free Play Review Wolf Rising is a standard IGT creation that's been about for over 15 years now, the free iPad slot portrays a beautiful layout and standardized gaming platform ...
Tags: Aristocrat free iPad pokies, Aristocrat free iPad slots, Aristocrat Free Slot App Article Tags, Mystical Sands Free Slots,