Are you looking forward to try out a fun tropical themed game? Well, if yes, then this free iPad slot game will be quite apt for you.

“Polynesian Pearl” is a cracker game which is developed and released by Aristocrat Technologies. With this game, the players will dive into the world of a tropical theme where they will discover a variety of imagery and interesting aquatic creatures, such as the beautiful mermaid, exotic fish, sea horse, and much more to boot.

Another rewarding feature of this game is that like many other older Aristocrat pokies machines it allows the players to win in 243 ways. So, get ready to undertake a virtual trip into this tropical theme, win exciting rewards, and have some fun along the way. 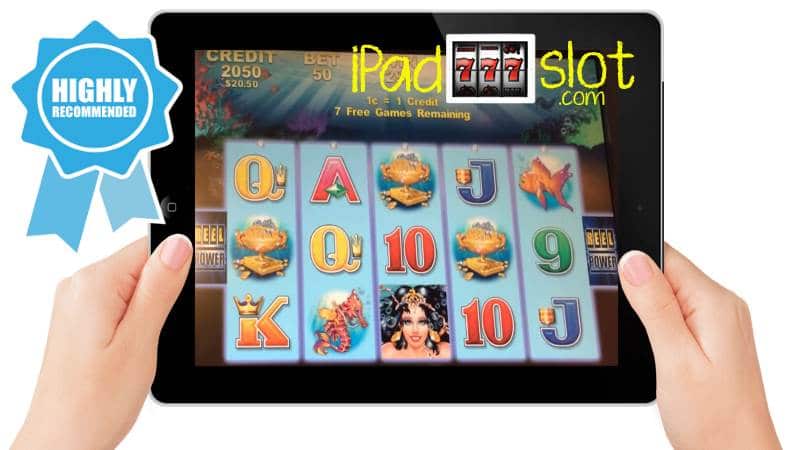 With a minimum wager of 7,500 coins, you can start playing this slot game. Plus, the maximum bet that you can place is 50,000 coins.

“Polynesian Pearl” doesn’t feature any stringent or rigorous game rule. Here, the wins are calculated in coins. All reels are played at a reel cost of 25 coins. Total Bet = Reel Cost * Bet Per Reel.

Players are required to place a bet and after that, they can start their gaming journey by clicking on the Spin button.

The available game symbols can be broadly classified into two separate groups based on their design, layout, and the payout they’re yielding.

The high-valued symbols are the lady mermaid, a rare golden cup, exotic fish, and the sea horse of the most notable ones.

The second group mainly contains the less-valued symbols, such as Ace, King, Queen, Jack, 10, and 9. These are the standard card symbols. Note, these classic card symbols offer a relatively lesser payout.

Check-out the pays below

Game symbols the wild and the scatter.

The bonus feature of this iPad slot game is known as “Sliding Wild Free Games Feature”. Here, three or more scattered jewel icons will trigger this feature and reward you with 15 free games.

NB: Features can be re-triggered during this feature.

This slot game features a great payout structure where the lady mermaid is the top-paying symbol. If you can accumulate five such icons, you will win 1,500 coins.

The standard payout structure is defined below:

If you’re looking to try out a slot game with simple & easy game play while avoiding stringent game rules and unwanted complexity, then Aristocrats “Polynesian Pearl” will be a perfect free or real money iPad slot game for you. With its tropical theme & aquatic creatures, you will certainly have fun playing this free pokies game at Heart of Vegas which has all of Aristocrats best free slots like Big Red Gold, Twilight Spirit, Oceans Beauty and Whales of Cash just to name a few games.

Rocket Man Free IGT Slots Game Guide Rocket Man is a cracker iPad compatible slot game of IGT which has created a new type of genre in the form of superhero-themed game. This superhero themed game ...
Crystal Slipper Free Slots Game Review This is a fairy tale themed slot game from IGT. This slot is one of those slots from IGT that comes with a storyline. The story centres on Cinderella, her story...
Zodiac Princess Free Aristocrat Slots Game It’s the aim of every one of us to be wealthy during our lifetime. No one really wants to spend an entire lifetime in poverty and as such, many people employ di...
Cash Coaster IGT Slots Free Play & Review The Cash Coaster Slot gives you a unique day at the amusement park, this IGT slot game is inspired by an old wooden styles coasters which are among the few rema...
Ainsworth Rich n’ Wild Slots Free & R... Here is another fun slot from the house of Ainsworth that promises to unearth the treasures from the forests of Mexico. This Mexican rainforest themed slot take...
Triple Red Hot 777 Free Slots Game Triple Red Hot 777 is a iPad slot machine game which provides players an altogether experience of real life slot games found in casinos of Las Vegas. Developed ...
5 Dragons Deluxe Slots Free Play Guide If you really love Asian themed slot games, then "5 Dragons Deluxe" will be an appropriate game for you. This free or real money iPad slot game is totally inspi...
4 Reel Kings Novomatic Free Pokies Game Guide 4 Reel Kings is an online slot machine which comes from the Novomatic stable of fine slot machines. This game comes with a retro fruit theme. As such, when spin...
Big Ben Free Aristocrat iPad Pokies App The Big Ben pokies game takes you on a virtual-trip to London on your iPad via a free app from Aristocrat. The game is based on the city of London and combines ...
Faeries Fortune iPad Slots How to Play Guide Faeries Fortune is an iPad slot game that has been developed by Big Time Gaming and it offers an attractive fairytale theme that will draw in many punters. Play...
Maltese Fortune Free IGT Slots Game Guide Many IGT powered slot game titles tend to tell the player of what to expect before they open the game. However, that’s not the case with this slot game as it ha...
Aristocrat Party in Rio Free Play Slots Guide Attractive women in beautiful costumes, face masks & valuable prizes are awaiting for you in this online slot game of "Party in Rio". Rio is a seaside city ...
Ellen’s 12 Days of Giveaways Free Online S... This is a XMAS holiday-themed slot game from IGT which borrows all of its features from the annual, ‘Ellen’s 12 Days of Giveaways’ shows where the iconic talk s...
Legend of the Pharaohs Free Barcrest iPhone Slot... Legend of the Pharaohs is another Egyptian themed slot game from SG Interactive as you would probably deduce from the title. Worry not about monotonous boring s...
Aristocrat Triple 7 Wildfire Double Free Slots G... Take your online slot gaming to a new level with Triple 7 Wildfire Double slot game from Aristocrat developers. This slot machine is built with high quality gra...
Wheel of Fortune Megaways Free or Real Play Guid... WHEEL OF FORTUNE MEGAWAYS QUICK START GUIDE Wheel of Fortune Megaways is an IGT powered online slot based upon the popular TV show of the same name. Just as th...
Pharaoh’s Ransom Slots Free Play Guide Pharaoh’s Ransom is yet another Egyptian themed slot game from Aristocrat. This is a awesome game which comes with most of the standard symbols used in Egyptian...
The Monkey Prince Free IGT Slot Game Guide The Monkey Prince is an Orient themed slot game which comes from the IGT company. While the oriental theme ranks as one of the most popular in the casino gaming...
Rainbow Riches Free Spins Barcrest App The ‘Rainbow Riches’ series is one of the most popular slot series to come from the SG Interactive stable of Barcrest games. Adding on to the vast number of tit...
Dollar Eagle Slot Game Free Play Guide Dollar Eagle is an free online slot machine which comes from the Aristocrat company. This online slot fuses two themes i.e. an animal and wealth theme, it's a b...
Tags: Aristocrat free iPad pokies, Aristocrat free iPad slots, Aristocrat Free Slot App Article Tags, Polynesian Pearl free iPad slots,