Barkin’ Mad is an animal themed slot game from Barcrest / SG Interactive with a special focus on mans best friend. In this game, the player will find himself in a small town where a marauding kennel of dogs is causing havoc.

In return, the player will be generously rewarded more so if he manages to land three or more dogs of the same nature at the same time on the reels. to start one’s adventure in Barkin’ Mad, players simply have to set in motion the game’s 5 reels that have with 10 ways to win some good coin. 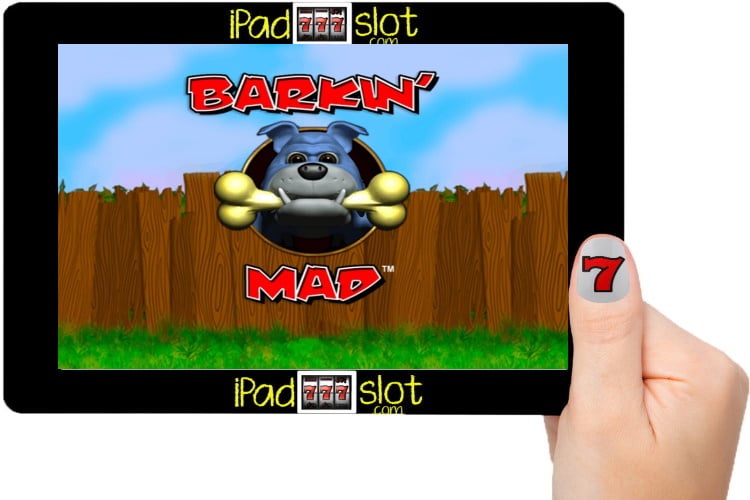 The background of this game depicts a green lush lawn where doggies love to play.

The symbols that players will find when spinning the five reels of this game include a brown dog, a white dog, a brown and white dog, a cartoonish dog and traditional poker symbols. 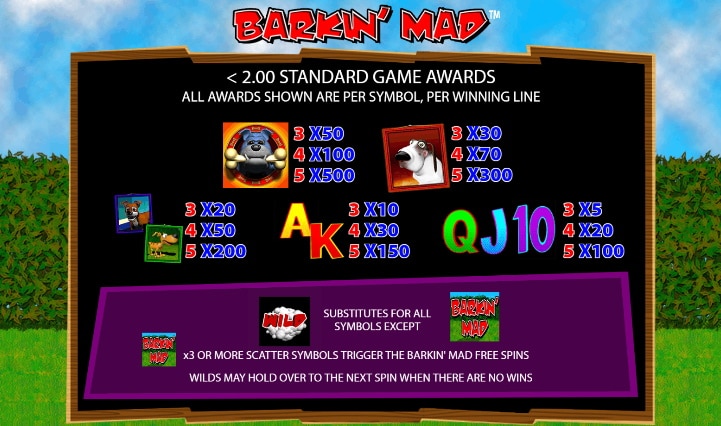 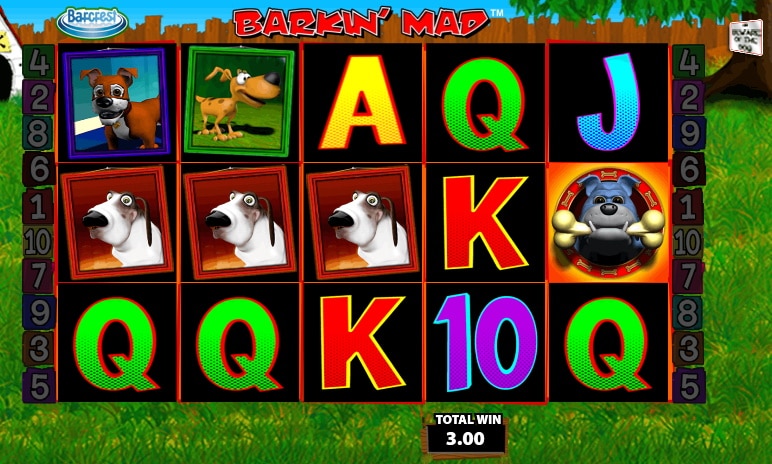 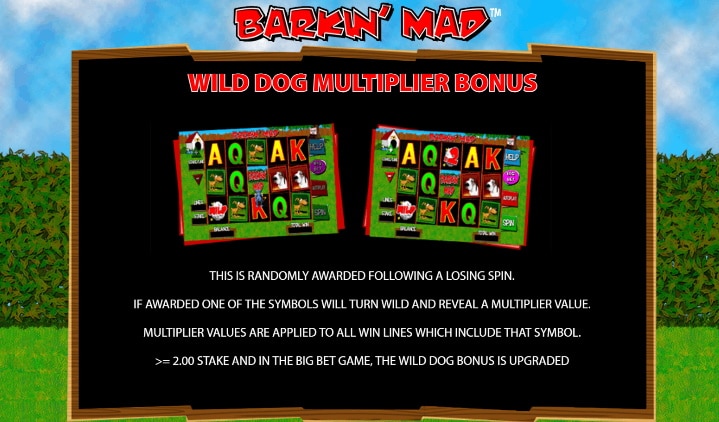 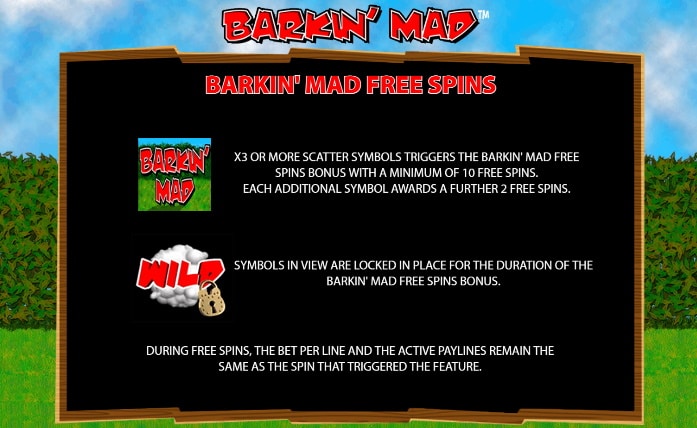 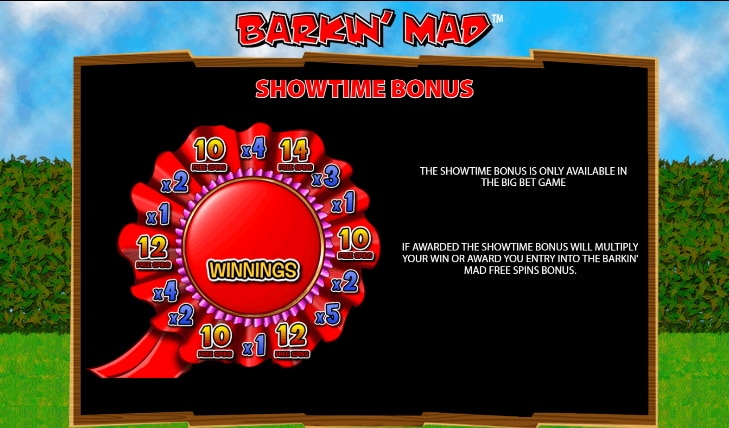 Barkin Mad is an fun pokies game to play which comes with numerous bonus rounds. The RTP of the standard game range from 94.00 to 95.00 percent. The RTP of the Big Bet Game stands at 96.00 percent, so the bonus can be a good little earner. Out of a 10 point rating, this Barcrest slot game gets an 7.3 point rating. 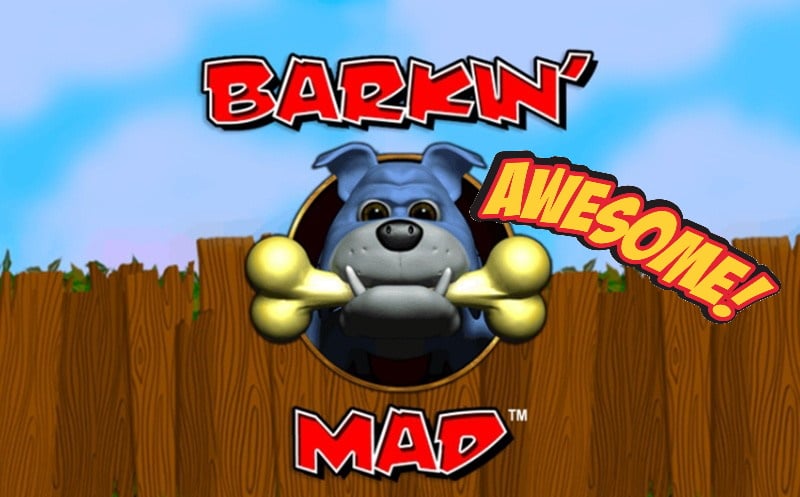 **The Barkin’ Mad Free Barcrest slot and/or many similar games can be played on your iPad, iPhone, Android or a Windows powered device for free, so take a look at our FREE pokies games page here. **

Dragon Dollars Free Ainsworth Pokies Guide Dragon Dollars is one of the best Asian themed online slot games to come out of the Ainsworth company. Ainsworth is an Aussie company which makes awesome pok...
5 Dragons Rapid Free Slots Game Review From bedtime stories that our parents or guardians used to tell us when we were young, stories with mythical creatures commonly known as dragons used to pop up ...
Jewel In The Crown Barcrest Free Slots Guide Jewel In The Crown is a Royal themed slot game developed by SG Interactive and Barcrest. This five reels online slot game solidifies the fact that SG Interactiv...
Bally Ra & the Scarab Temple Free Slot Guid... The ancient Egyptian theme has been used by game developers for decades now. Due to the high number of ancient Egyptian themed slot games released each year, on...
Buffalo Spirit by WMS Free Slots Guide Buffalo Spirit iPad slot from WMS is features a colorful western nature theme and interesting game play that you are definitely going to enjoy. The reels are fu...
Mighty Wilds by Ainsworth Free & Real Money... Mighty Wilds by Ainsworth Gaming is a famous iPad compatible free slot machine game developed in a cracker theme, which perhaps has topped the reputation of the...
Triple Cash Wheel Bally Android Free Slots App G... Triple Cash Wheel is a retro-themed Bally Android compatible free or real money slot game app from SG Interactive. While most retro themed games are all about s...
Ellen DeGeneres Show Have a Little Fun Today Fre... After acquiring the exclusive rights to develop Ellen DeGeneres branded slots, IGT moved fast to develop as many Ellen themed slots as possible and this is one ...
Jackaroo Jack Lightning Box Free iOS and Android... Jackaroo Jack is an online slot machine which comes from the Lightning Box stable. This iPad, Android & iPhone compatible slot comes with an adventure theme...
Ainsworth Sugar n Spice Hummin Gaming Guide Australian pioneers in the gaming world aka “Ainsworth” has made it all possible with the Sugar ‘n’ Spice Hummin slot game that can be enjoyed on your iPad for ...
5 Elements Slots Game Guide The 5 Elements slot brings all the 5 elements of fun, pleasure, money, fortune, and luck to you. This slot is from GameArt and brings the age-old symbols of Asi...
IGT Shamrockers Eire To Rock Free Slots Game Gui... IGT got in sync with modern players needs when they released Shamrockers slot machine. It is a cool 5 reeled machine that features 20 fixed paylines. It is musi...
Treasures of the Pyramids Free IGT Slots Guide Egypt is known as the home of pyramids. It's not difficult to see why this is so because if you plan a visit to Egypt today you are going to find some incredibl...
Pearl River Ainsworth Slot Game App Review Pearl River is an aquatic-themed slot game from the Ainsworth stable of super pokies. This slot has a number of elements that make it appealing. First of all, i...
Champion of the Track iPad Slots Review Champion of the Track is a stunning iPad game from Net Entertainment. The game offers 30 paylines and can be played for great bet amounts that range from bets o...
Maltese Fortune Free IGT Slots Game Guide Many IGT powered slot game titles tend to tell the player of what to expect before they open the game. However, that’s not the case with this slot game as it ha...
The Amazing Big Top Gold Free Slot Game Review This carnival themed free iPad slot game from Aristocrat Gaming takes one to a carnival for some gaming excitement under the big top. Inside the carnival, playe...
Aztec Temple Free IGT Slots Guide One of the most common criticisms subjected to slots is that they are monotonous as they follow the same path i.e. one has to press the spin button after a few ...
In Bloom Free Slots by IGT Guide In Bloom is a unique and light flower themed free iPad slot game app from IGT. The has gets 5 reels, 3 rows, and 40 pay lines and a host of bonus games and feat...
IGT Electric Tiger Free Slot Game Guide Electric Tiger delivers a magnificent display of luminous fruity symbols. The retro theme is complemented by fantastic sound effects which enhance gameplay and ...
Tags: Barcrest android slot, Barcrest free app, Barcrest free iPad pokies, Barcrest free iPad slots, Barkin’ Mad,