The Big Ben pokies game takes you on a virtual-trip to London on your iPad via a free app from Aristocrat. The game is based on the city of London and combines some amazing graphics of the city. It includes some iconic symbols like the Big-Ben Clock Tower, the Queen’s Royal Guards, and the Double-Decker buses.

Big Ben game features a five slot reel and 25 paylines. The background will remind you of a typical London street and the graphics are way too fascinating. The music playing is the background is the standard electronic noise. What makes this game different from other slot games is the wide variety of bonus features.

You can play free slots like Big Ben by Aristocrat pokies on an iPad, iPhone or Android devices direct from our site. 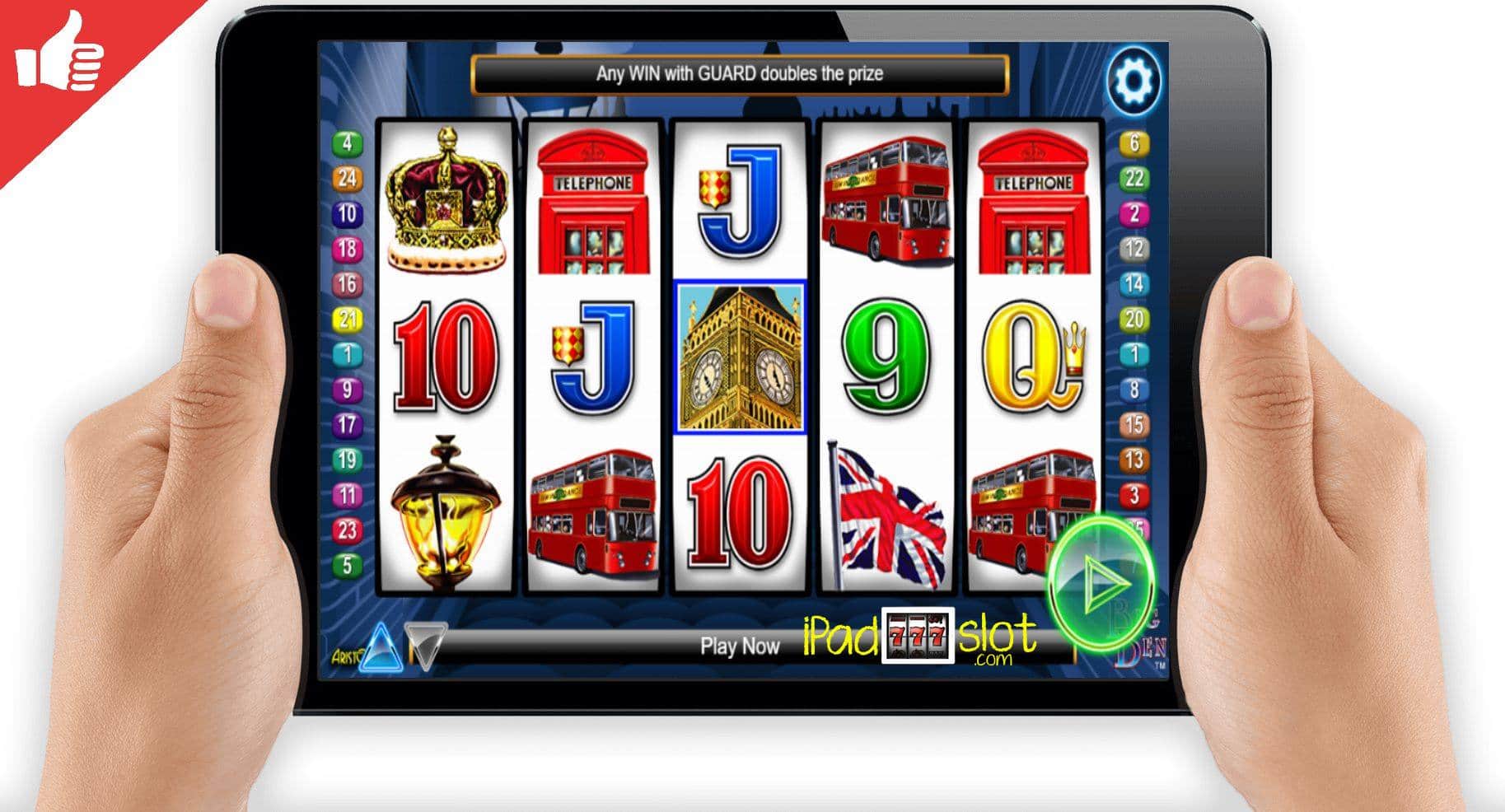 How to Play Big Ben on iPad Summary 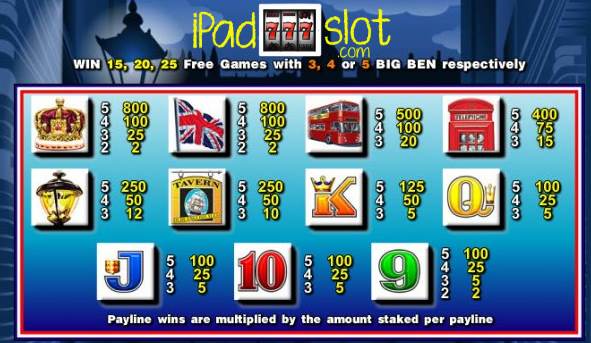 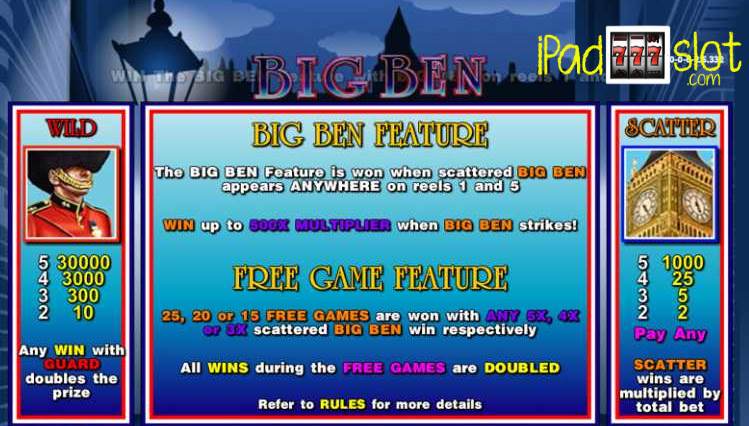 Big Ben pokies is quite a fun game as compared to other games developed by Aristocrat. The London theme is quite lovely but if the background music could also have been related to London, it would have been marvelous.

Big-Ben is a low variance iPad slot game but the added features will always make you want to come back. This game is all about the fun, not to forget the excellent pay-outs. Get the free pokies app for iPad from Aristocrat today from Heart of Vegas on facebook or from our iPad casino reviews.

Spring Carnival Slots (aka) Ladies Day Free Poki... The Spring Carnival slot (pokies) machine is a classic 20 payline, 5 reels and 3 row Australian themed game that was one of the most popular poker machines in A...
Six of the Best Free Aristocrat Mobiles Pokies G... On this page we have six of the best Aristocrat pokies to play on a mobile like an iPad, iPhone or an Android gadget. These are the ones that you must take a sp...
Wild Panda Free Aristocrat Pokies app The great and fun-loving Panda is viewed as a symbol of good luck in China and Asia. To the whole world; it is a gentle furry creature that needs to be treasure...
Dragon Emperor Free Play Aristocrat Slots Guide Are you ready to embark an exclusive gaming adventure by exploring the hidden treasures of the mysterious Dragon Emperor? Well, if yes, then the Aristocrat "Dra...
Aristocrat Wild Fortune Serengeti Stampede Slot ... Wild Fortune Serengeti Stampede is a progressive online slot that is powered by Aristocrat. The mere fact that is a progressive game makes it a great propositio...
Play it Free Aristocrat 5 Miners Gold Slot 5 Miners Gold is a free pokies machine which comes from the Aristocrat company. In this online slot machine, players will be taken inside a gold mine where they...
Play Free The Third Prince VS Aristocrat Slot If you fancy China and Orient themed free online pokies games, then you are going to love The Third Prince VS from Aristocrat Gaming. This new version has had s...
Triple Red Hot 777 Free Slots Game Triple Red Hot 777 is a iPad slot machine game which provides players an altogether experience of real life slot games found in casinos of Las Vegas. Developed ...
Bombay Slots Game by IGT Free Play Guide This Indian themed slot from IGT borrows much of its inspiration from other IGT themed slots as the setting is set against a wealthy themed tone. This game take...
The Huntress Aristocrat Slot Free Play Guide The Huntress is an free online slot machine which comes from the Aristocrat studio. Just as can be deduced from the title, this online slot machine does come wi...
Dolphin Dice Free Ainsworth Slots App Guide Dolphin Dice is an ocean themed slot game from the Ainsworth stable of fine pokies machines. This is an innovative game, during the bonus rounds as the player i...
Aristocrat Peacock Riches Free Slot Game Guide If beauty, the orient and money make the perfect combination, then Aristocrat has developed the perfect 5 reeled video slots game for you to play for free onlin...
Free 50 Dragons iPad & iPhone Pokies Game 50 Dragons is one of the most popular genres of online slot games that truly focuses on the mysterious east. This online slot game is developed by Aristocrat an...
Roaming Reels Pokies by Ainsworth Free Play ... The Roaming Reels pokies machine is developed by Ainsworth. The game play is based on roaming African plains which is a bit like 50 Lions slots of course in man...
Wild Tooth Free Slots Game Guide Wild Tooth is an animal themed slot game from Aristocrat. The game takes the player right inside a huge forest with some tall mountains. For spotting animals of...
Piggy Jackpots IGT Slots Game Guide This IGT powered video slot is all about some cute little pigs as you can deduce from the slot’s title. Match as many fat little pigs as you can and you are gua...
Wolf Rising By IGT Slots Free Play Review Wolf Rising is a standard IGT creation that's been about for over 15 years now, the free iPad slot portrays a beautiful layout and standardized gaming platform ...
Carnival of Mystery IGT Slots Game Guide This slot is one of IGT’s holiday-themed games that hits the genre score quite well. The slot is inspired by the Greek Orthodox and Western Christian festive se...
Siberian Storm by IGT Slots Game Guide Siberian Storm is an animal-themed slot machine game that features a unique story line of majestic Siberian Tigers. IGT gaming has taken these types of genre ve...
Pure Gold by Aristocrat Technologies Review Pure Gold, developed by Aristocrat Technologies, has super duper features, exciting game play, and various lucrative gaming options and it can be played fro fre...
Tags: Aristocrat free iPad pokies, Aristocrat free iPad slots, Aristocrat Free Slot App Article Tags, Big Ben free iPad pokies, Big Ben free iPad slots,