Classic slots are a favourite of most gamers and in this slot, Aristocrat Gaming fuses elements of classic slots and also elements of modern video slots in bringing about an immersive and absolving animal themed Big Red 2 to casino players.

The ‘Big Red’ games are one of the most popular series of games from Aristocrat and this slot is the second one in a line of three Big Red titles (thus far). Players looking to start their adventure in this game need to start by setting in motion the game’s five reels which come with 5 paylines.

The background of Big Red 2 slot game depicts a plain that is populated sparsely by some canopy trees as well as bush shrubs and patches of running grass. The reels of the game are themed by a red colour depicting the Aussie outback just like all the other games in this genre.

Take a free spin on Big Red and / or similar other slot games on our site for iPad, iPhone and Android HERE. 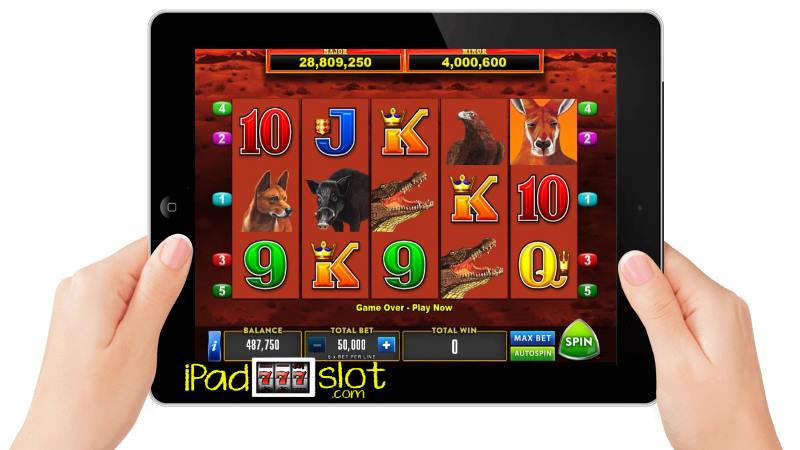 On the reels, players will find the following symbols: crocodile, rhino, eagle and a dog. There are also some playing card icons.

Big Red 2 is a simple and easy game to understand and also to play so even granny can have a crack on this game. Out of a 10 point rating, this slot gets a solid  8 point rating. This is a true blue Aussie style pokies machine that’s loved the world over. Have a free spin on Big Red 2 at Heart of Vegas or play for real bucks at select online casinos with Aristocrat pokies games.

Magic Flower Deluxe Free Aristocrat Pokies Game Magic Flower Deluxe is a online slot machine from the Aristocrat company. This game comes with an oriental theme of an Asian village setting. The Magic Flowe...
Pharaoh Rising IGT Slots Game Review This Egyptian themed video slot from IGT is inspired by the tales of ancient Egypt where the Pharaoh was the wealthiest and most powerful individual owning ever...
The Monkey Prince Free IGT Slot Game Guide The Monkey Prince is an Orient themed slot game which comes from the IGT company. While the oriental theme ranks as one of the most popular in the casino gaming...
Red Tiger Gaming Imperial Palace Free Slots Red Tiger Gaming has come up with the ancient Chinese kingdom themed Imperial Palace pokies game. The game gets 5 reels and 20 pay lines. Players can bet betwee...
Fortune Teller iPad Slot Machine Review Learn your fortune when playing a great video iPad slot from Net Entertainment. Fortune Teller is a game entirely based on fortune telling and with this game, t...
Flying Horse Free Slot by Ainsworth Guide Introducing a fun creation from Ainsworth which is Australia’s leading pokie gaming software developer, this Flying Horse game provides you with bonus rounds, s...
Orange is the New Black Free Online Slots Game G... Orange is the New Black is a hugely popular Netflix TV series that has been running since 2013. This comedy drama series is rated a big 8.3 on IMDb, we get to s...
Glitter Gems by Ainsworth Free & Real Play ... Glitter Gems exciting iPad compatible slot machine game by Ainsworth gaming, it's a spectacular example of how to engage players in a eye candy theme which Ains...
Blazing Goddess Lighting Box Games Free App Guid... Blazing Goddess is an online slot machine which comes from the Lightning Box stable of awesome pokies. This online slot machine comes with a Polynesian theme as...
Vegas Nights Slots by Pragmatic Play Game Guide The Vegas Nights iPad slot game gives the players a whirlwind experience of Las Vegas, along with providing awesome jackpot feature rounds. Dozens of games can ...
Day of the Dead by IGT Free Play Slots & Re... The "Day of the Dead Slot" game is a compelling Mexican Halloween-themed IGT social iPad slot that can be played at the Double Down Casino. The game theme perfe...
Sumatran Storm Slots Game Guide This is one of many IGT’s animal-themed slots. Sumatra is an island found near Indonesia where one can find a lot of tigers and other wild animals. The objectiv...
Medusa 2 iPad Slot Game Preview and Free Play Following the amazing success of Medusa, NextGen is offering a sequel to the iPad slot called Medusa II. With this game, the theme remains identical to the orig...
Aristocrat Zorro Free Online Slot Game Guide The Zorro online slot game is powered by Aristocrat Technologies, it features a variety of twists and turns in the bonus features that we keep you entertained a...
Wild Tooth Free Slots Game Guide Wild Tooth is an animal themed slot game from Aristocrat. The game takes the player right inside a huge forest with some tall mountains. For spotting animals of...
Enchanted Unicorn Slots Game Guide This is a fantasy themed slot from IGT which takes you into a mythical forest that is full of unicorns, mushrooms and some lovely flowers. Your adventure in thi...
Reel King Free Spin Frenzy Slots App Reel King Free Spin Frenzy is a "back to basics" fruit themed iPad slot game from the Novomatic. This video slot app is one the best in the Reel King slot serie...
Celtic Queen Social iPad Slots Review Are you ready to discover a unique Aristocrat free iPad slot game with an interesting & innovative game theme on your iOS device? If yes, then get ready to ...
Aristocrat Lucky Fortune Link The Great Empress ... This oriental themed video slots game from Aristocrat has been designed with 5 reels and 243 ways in which you can win. Throughout the game you stand to unlock ...
Lord of the Ocean Novomatic Free Slot Game Guide Lord of the Ocean is a unique slot game that comes from the Novomatic company. As players may probably deduce from the game’s title, the game comes with an aqua...
Tags: Aristocrat free iPad pokies, Aristocrat free iPad slots, Aristocrat Free Slot App Article Tags, Big Red 2 Free Slots,