Cash Spin Slots made by Bally is one of the most simple slot games out there, so make sure you grab the free Bally iOS or Android slot app and get playing. There is no highfalutin theme to the game. It has a clean interface and is a simple game in all aspects like many of the best Bally Tech slots are. You can play some free Bally slots here.

** The Bally Cash Spin slots game may be available to play for free or real money on your iPad, iPhone, Android, Windows device, PC or Mac. Just take a peek at our online casino reviews here. **

This game comes with 5 reels and 243 ways to win with 3 symbols in view for each reel. The game has an average rating by players of around 4 stars on most sites.

The background behind the reel is filled with two variants of blue, a main background light blue with darker lines on it coming from the centre. Above it is the title of the game and below is the wagering buttons. The balance credits that you have is displayed in a small bar at the top. 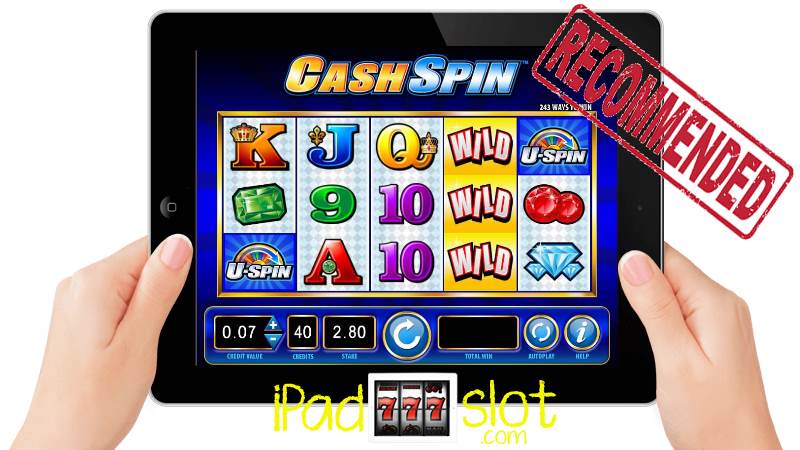 On the reels are symbols resembling precious stones, money etc. These include a symbol of a diamond, a ruby, an emerald, and a dollar sign symbol. The slot also comes with traditional poker symbols i.e. Aces, Jack, Queen, and King with an inclusion of symbols of 10 and a 9 as well.

In my opinion, this is one the best slot games I have played recently on my iPad but I am a bit biased as I love Bally games over all other pokies. There is no fancy theme and the game is just about old school slots which I like a lot. Overall I’d give Cash Spin a score of 8.5/10.

Cash Express More Chilli Slot Free Play Guide Cash Express More Chilli is a fun game from Aristocrat which comes with a Mexicana theme. Mexicans are known for their love for chilli and in this online slot m...
Gold Stacks Queen Marie Free Slots Powered by Aristocrat, Gold Stacks Queen Marie is a free online slot machine which comes with a Royal theme and some awesome jackpot rewards to be won. Gold St...
Lucky Tree Bally Free Slots Guide Lucky Tree is an Asian themed slot game developed by Bally Technologies. In this slot game, you will be banking on the Chinese gods to lighten your path so that...
Ainsworth Sugar n Spice Hummin Gaming Guide Australian pioneers in the gaming world aka “Ainsworth” has made it all possible with the Sugar ‘n’ Spice Hummin slot game that can be enjoyed on your iPad for ...
Astronomical Magic Free Konami Pokies Game Astronomical Magic is an online slot machine which comes from the Konami company. As one can deduce from the title, this free pokies game does come with a magic...
Gold Stacks Golden Seas Free Aristocrat Pokies Gold Stacks Golden Seas is an jackpot online slot machine which comes from the Aristocrat company. This free game comes with an ancient royal theme. Gold Stack...
Sacred Guardians Slots Free Play Guide Sacred Guardians is a awesome animal themed slot game from Aristocrat. This is a 4 level progressive game which features some cute animals on the reels. Anyone ...
Natural Powers by IGT Free Slots Guide The iPad compatible slot game Natural Powers from IGT is a comic-themed type slot game. It possesses 5 reels and 40 pay lines. The game is based on four element...
Treasures of Troy IGT Slots Game Guide This is one of the many IGT branded slot games which educates while at the same time providing you with the best in terms of gaming entertainment. This slot is ...
Cayetano Gaming Big Panda Slot Game Guide Pandas are almost on the verge of extinction in many countries unfortunately. We may or may not see these cute and lovely animals in large numbers after a few m...
Dream Catcher Indian Dreaming Pokies Styled Free... DREAM CATCHER FREE SLOT GUIDE Native Americans, in general are superstitious people by nature. Thanks to oral as well as written traditions from history, peopl...
Ainsworth Ming Warrior Pokies Free & Real P... Ming Warrior from Ainsworth is a 5-reel slot game with 20 bet lines and it's a must play on your iPad. Show your bravery in this Chinese-themed game and you wil...
Enchanted Unicorn Slots Game Guide This is a fantasy themed slot from IGT which takes you into a mythical forest that is full of unicorns, mushrooms and some lovely flowers. Your adventure in thi...
Ocean Magic IGT Free Play Slots Game The title of this IGT powered game does reveal to the player what this game is all about. Ocean Magic is an aquatic themed slot game which takes place in an und...
Mystical Mermaid IGT Slots Free Play Guide This is one of IGT’s nautical themed iPad compatible slots so if you like games like Dolphin Treasure or Mermaids Millions then this is your go-to pokie. All th...
Temple of Gold Slot Review and Free Play Guide There are hundreds of treasure hunting slots online with a gold theme, so if you like the Where's the Gold by Aristocrat or the Gold Factory game from Microgami...
Reel King Novomatic Slots Free App Guide Reel King is a fruit themed slot game which was developed by Novomatic who are one of the most popular slot machine companies in Europe. As most other fruit-the...
Big Ben Free Aristocrat iPad Pokies App The Big Ben pokies game takes you on a virtual-trip to London on your iPad via a free app from Aristocrat. The game is based on the city of London and combines ...
Royal Spins by IGT Free Slots Guide The light hearted fruity slots theme bring an element of character to what one can imagine royalty to have been like back in history. Another fine free pokies g...
Island Eyes Free IGT Slots Game Island Eyes is an online slot machine which comes from the IGT company. Island Eyes is an adventure-themed game that takes the player deep inside a thick forest...
Tags: Bally free app, Bally free iPad pokies, Bally free iPad slots, Cash Spin Slots,