Are you ready to discover a unique Aristocrat free iPad slot game with an interesting & innovative game theme on your iOS device? If yes, then get ready to play this slot game which is inspired by the ancient Celtic culture.

This legendary civilization has left a rich & sophisticated cultural heritage across all over Europe. Thus, Celtic Queen certainly provides you a wonderful opportunity to enjoy an exciting slot game while exploring the ancient cultural heritage of the Celts.

The game features a stunning graphics, beautiful scenery with a vast landscape of a fjord & tall mountains, and attractive visuals. In this context, read out this review and reveal the key game features. 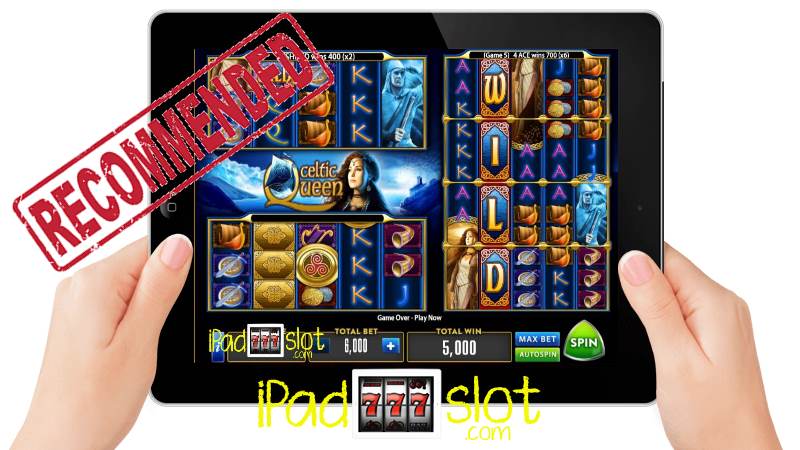 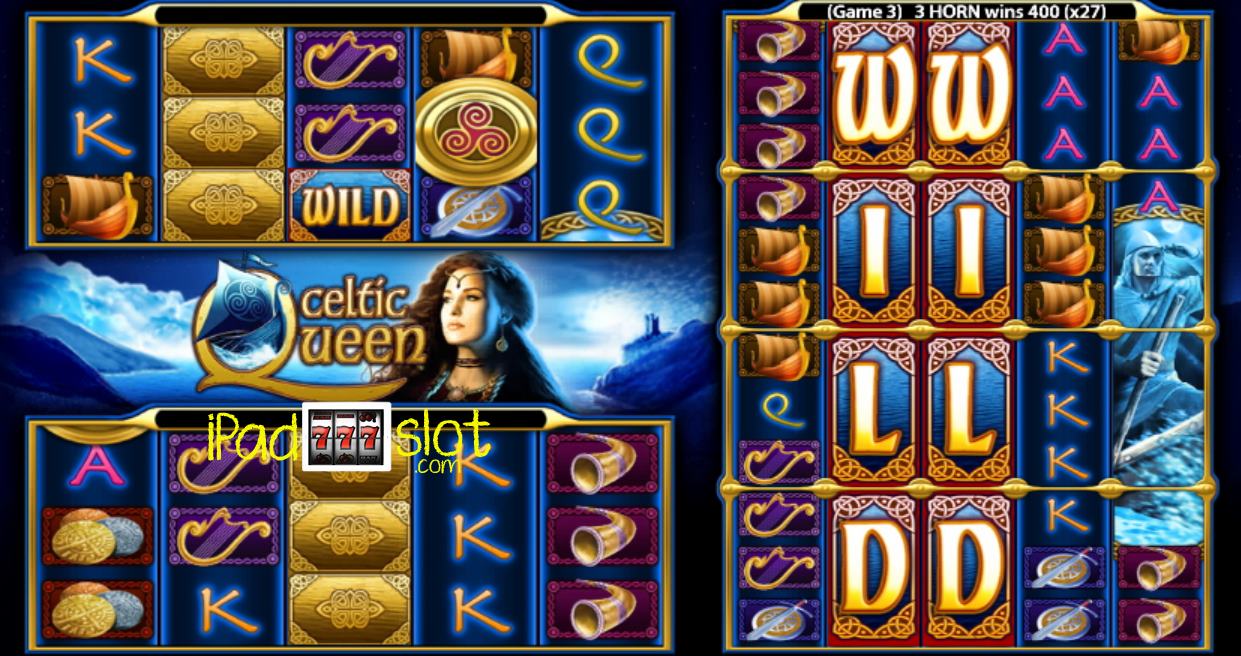 In the first group, you will only find the most common symbols, such as the standard card symbols, for example, Jack, Queen, King & Ace.

The second group mainly contains the typical & traditional Celtic artifacts, such as sword and shield, harp, sailor, coin, ship, horn & the famous Celtic Queen herself. Note, these are the most recognized & valuable symbols.

Here to note, a special icon with an overlaying text of Wild is the wild icon of this game. This wild symbol appears on the reel number # 2, 3, and 4 respectively. Plus, they can replace the basic icons and form winning combinations.

Note, the scatter symbol is the Celtic emblem that triggers the bonus feature.

After placing a preferred wager, choose the Spin button in order to spin a reel or start a game play.

The base payout structure is described below:

With amazing graphics quality & multiple reel sets, the free Celtic Queen slot by Aristocrat offers you multiple ways to hit a great winning combination on your iPad. Thus, don’t forget to give it a try and win plenty of rewards easily, well hopefully.

If you liked this free slot machine then we do suggest you have a go on the free King of the Nile, Indian Dreaming, Spring Carnival, Heaven & Earth, 50 Lions, Jaguar Mist, Zodiac Princess and Wild Wings pokies at the Heart of Vegas site.

Treasures of the Pyramids Free IGT Slots Guide Egypt is known as the home of pyramids. It's not difficult to see why this is so because if you plan a visit to Egypt today you are going to find some incredibl...
Sun Chief Slots Free & Real Money Ainsworth... Ainsworth never lets down its customers and proved once again with the Sun Chief iPad slot game available at the Players Paradise casino. You can have adventure...
Deco Diamonds Slot Game Guide Deco Diamonds Slot Game Review Deco Diamonds is a game which comes from Microgaming. As can be deduced from the title, this slot comes with a diamond theme hen...
Lightning Box Free Slots Fortune 8 Cat Cats are considered as one of the lucky animals in an ancient history. More so if you are from China. This slot promises to bring good luck to you in the form o...
Silver Lion by Lightning Box Free Play Guide Silver Lion is an  slot game developed by Lightning Box. This is a 5 reel game that offers 1024 ways of winning. Players are provided with an opportunity to tak...
Witches Gold Ainsworth Slot Game App Guide Witches are generally feared by society and are very popular characters at Halloween time, you may even know a witch, possibly your mother-in-law is one as you ...
Mythical Treasure Fortune Gods Jackpot Slot Guid... Pocket Games Soft in recent times has embarked on a drive to launch jackpot versions of its most popular online slot machines. One of such games is Mythical Tre...
Shooting Stars Online Slot Review Shooting Stars Online Slot Game Review The title of this slot will have you thinking about everything cosmic and celestial but alas, there is nothing like that...
Pharaoh’s Fortune Slots by IGT Free Play Guide Pharaoh’s Fortune is one of IGT’s premier classic casino games based on the ancient Egyptian culture, and history of the country featuring the times of sphinx a...
Dragon’s Law Free Slots App by Komani Guide Dragon’s Law is an Asian themed slot game developed by Konami aimed at quenching the unending thirst of Asian genre slot games among players. This Asian themed ...
Yokozuna Clash Free Slot Review The Yokozuna Clash Slot is set to be the ultimate battle of sumo wrestlers on the reels, with the lucrative chance of winning some handsome rewards. It is set i...
101 Lions The Best Free Lions Themed Slots Game 101 Lions by Intervision Gaming puts the spotlight on our very own king of the jungle right from your iPad. With stellar imagery that evokes the exquisite beaut...
Wheel Of Fortune Triple Extreme Spin Free App Ga... Wheel of Fortune Triple Extreme Spin is a popular iPad game developed by IGT. This is one of the top-quality slot machine games in the Wheel of Fortune series. ...
Dolphins Pearl Deluxe Novomatic Free Play Guide Marine life is the central theme of Dolphins Pearl Deluxe online slot as you expect, and players who love a slot game that leans more towards these beloved sea ...
Aristocrat The Walking Dead 2 Free Play Pokies G... The Walking Dead 2 is a branded slot game from Aristocrat. It's a branded game based on the hit AMC TV show and players enjoying this pokie can expect to meet a...
Moon Festival by Aristocrat Slots app for iOS There are a lot of slot games with Oriental themes that have been published by Aristocrat, and Moon Festival certainly calls to mind slot games like 50 Dragons ...
Gold & Dragon Free Slots Game Guide Gold & Dragon is an oriental themed slot game from IGT. The game is one of the newly released progressive games from the IGT stable which comes with four pr...
Pixies Of The Forest Slots Game Guide Pixies of the Forest, the slot game from IGT shall take the players to a fantasy-filled world where pixies rule. The game gets 5 reels and 99 pay lines for the ...
Hot Shot Progressive Free Bally Slots Hot Shot Progressive is a retro-themed slot game which comes from the SG Interactive Bally Studio. While most retro themed slot games are known for their simpli...
Magic Pearl Lightning Link Aristocrat Free Pokie... Aquatic themed games are popular with players and great pokies like the Turtle Treasure, Dolphin Treasure and Lobstermania are the great ones that come to mind ...
Tags: Aristocrat free iPad pokies, Aristocrat free iPad slots, Aristocrat Free Slot App Article Tags, Celtic Queen iPad slot,