Cleopatra Plus is an iPad compatible slot game by IGT Gaming whose theme is based on the Egyptian Queen and the time of her rule. The game comes up with as much as 5 reels and 40 payout lines. The bet per line limit falls from 1 to 50 and the maximum bet, which can be invested in is 2000 coins.

The maximum payout of the game is 1500X, and this is backed up with a healthy RTP ranging somewhere from 94.89% to 96.70% depending on where you play it be-it online or at a land casino. 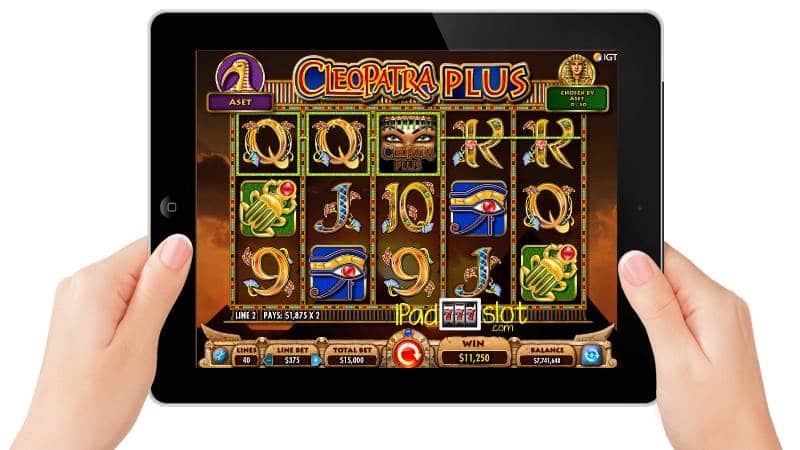 Cleopatra Plus slot game contains 10 generic symbols along with 6 card symbols starting from 9 to Ace. Wild and Scatters ultimately support all these symbols. 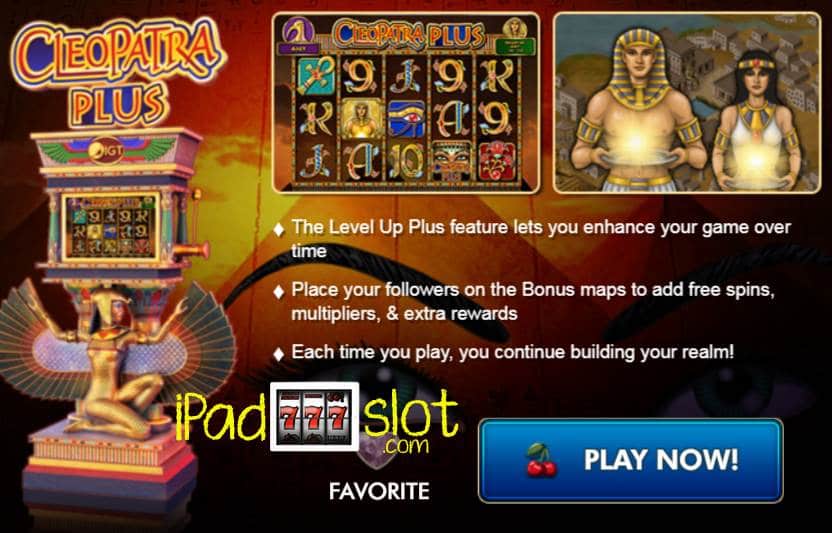 The Generic symbols of animal characters pay out pretty well as when 3 of them are hit anywhere on the reels, they tend to pay a minimum of 20 coins. On hitting 4 or 5 of these will result in earning as much as 75 and 400 coins respectively.

Lower-valued character symbols have the different payouts, and all of them can only be earned when a minimum of 3 similar symbols appears. Other generic card symbols from 9 to Ace appear anywhere on the reels and give the minimal payouts in comparison to the character symbols. 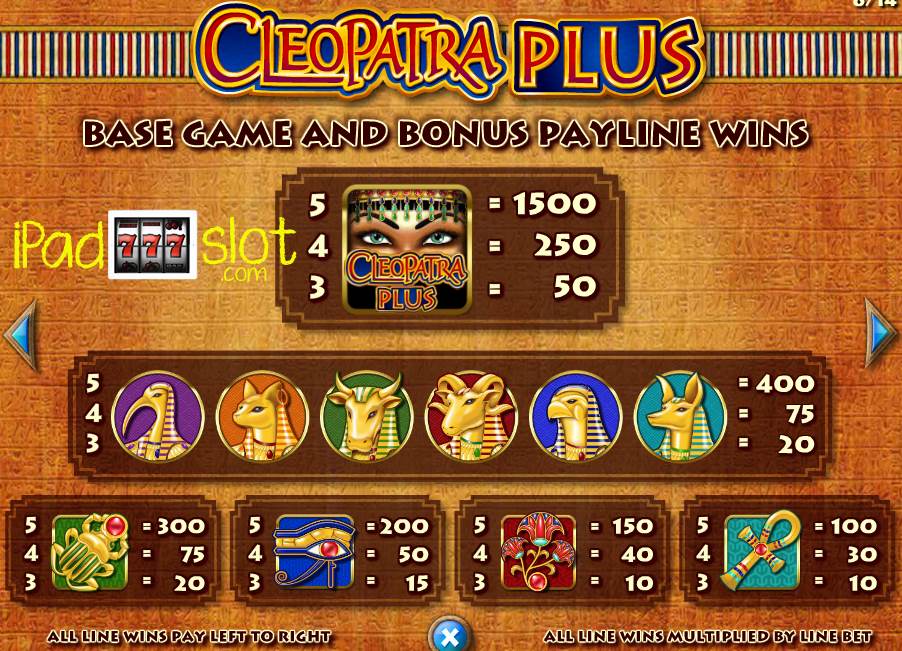 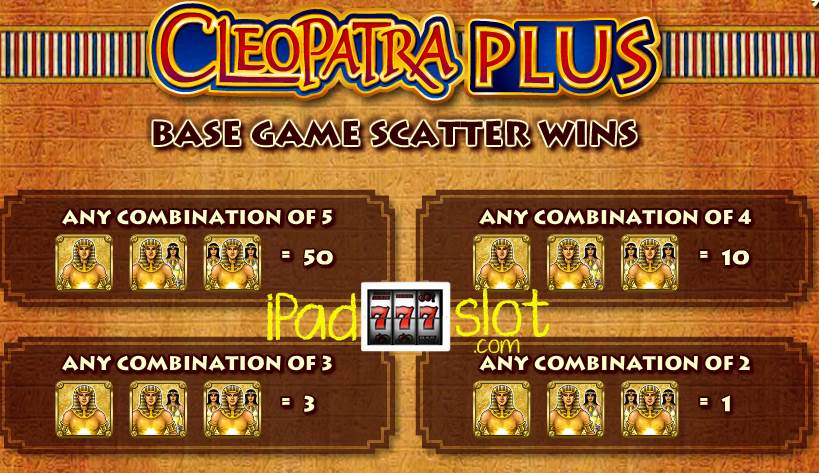 Cleopatra Plus is a fairly good iPad slot machine game, various reasons on why the players should start playing the game are reviewed above. From free spin bonus features to the level up plus features, winnings in the game is quite big if you get lucky. We rate this game 7.4 from 10 possible points in our review.

Nice Bonus Wins on Cleopatra Below

Prosperity Lion PG Soft Online Slot Review PROSPERITY LION QUICK START GUIDE One of the most celebrated Asian Emperors; Jiang Nan once narrated one of his dreams. In his narration, he said that a huge l...
Pacific Paradise IGT Free Mobile Slot Review The underwater world is a world of aquamarine life and just like the way of life at the bottom of the ocean, IGT has recreated an video slots game that features...
Rainbow Riches Free Spins Barcrest App The ‘Rainbow Riches’ series is one of the most popular slot series to come from the SG Interactive stable of Barcrest games. Adding on to the vast number of tit...
Kawaii Dragons by Booming Games Guide Kawaii Dragons is a 5-reel and 25 payout line supported fun slot machine game, which assures to show dragons in the most beautiful light. Developed by Booming G...
Cosmic Fortune iPad Slots Review Cosmic Fortune is the newest iPad slot to be released by NetEnt and it is surely a great game to play for real money. The game is based on an alien invasion and...
Pixies Of The Forest Slots Game Guide Pixies of the Forest, the slot game from IGT shall take the players to a fantasy-filled world where pixies rule. The game gets 5 reels and 99 pay lines for the ...
Ladies Nite Online Slot Review Produced by Microgaming, Ladies Nite is an exciting game with heaps of vivid graphics when the girls get the party started! With a nightclub type of theme, the ...
Aristocrat More Chilli Emerald Edition Free Slot... Crank up the heat in this deliciously diabolic Mexicana themed online pokies game from Aristocrat, Australia’s number 1 gaming brand with roots in land based ga...
Ainsworth Flash Cash Free Pokies Guide What greets the eye is a substantial display of vivid imagery powered by high definition graphics and an impressive bold theme when playing Flash Cash pokies. I...
2Can Free Aristocrat Slots Game 2Can Free Aristocrat Slot Review Embark on a journey through the exotic jungle forests on the reels and unlock the hidden treasure bonuses Aristocrat has creat...
Reel Riches Fortune Age SG Slot Free Play Guide Reel Riches Fortune Age is an Chinese themed slot game which is part of the ‘Reel Riches’ slots series. Like other ‘Reel Riches’ slot games, this game is powere...
101 Lions The Best Free Lions Themed Slots Game 101 Lions by Intervision Gaming puts the spotlight on our very own king of the jungle right from your iPad. With stellar imagery that evokes the exquisite beaut...
Golden Wins Free AGS Slot Game Guide This very unique AGS slot game goes by the name Golden Wins and it comes with an oriental theme with heaps of firecracker visuals, it's exciting and fun to play...
In the Shells IGT Slots Game Guide This is another nautical themed slot game from IGT developed in the same genre as other water and ocean themed slots from the same developer. Quick Start Guide...
Cash Wizard Bally Slots App Free Play Guide This is another game developed by the famous Bally Technologies. The game has a simple interface and it's a great Bally free slot app for your iOS device. It ha...
Aristocrat Mammoth Thunder Slots Free Play Guide This is an popular iPad slot game released by Aristocrat Technologies. "Mammoth Thunder" presents the beautiful theme of a native wildlife where the players wil...
Aristocrat Aztec Goddess Pokies Free Play Guide With Aztec Goddess slot game, you will undertake a virtual trip to the deep jungle of Mexico & discover the mysteries that are hidden beneath the mighty pyr...
Sacred Guardians Slots Free Play Guide Sacred Guardians is a awesome animal themed slot game from Aristocrat. This is a 4 level progressive game which features some cute animals on the reels. Anyone ...
The Legend of Big Foot Free Barcrest Slots Guide Legend has it that in years gone by (and still to this day), there is a huge creature named Big Foot or Sasquatch who roams around North American forests. In a ...
Cai Yuan Guang Jin Free Slot Game Guide The Chinese New Year is the most anticipated holiday in China. All year round communities and families are much consumed with their New Year preparations and wh...
Tags: Cleopatra Plus Free Slots, IGT free app, IGT free iPad pokies, IGT free iPad slots,