Brazil is known for many things but there are actually two things that have put her on the global map. First, there is soccer, Brazil is known as the home of soccer as virtually everyone in the country is fond of the sport and to show for this, both the Brazilian male and female teams are a force to reckon with on the global stage.

Apart from being a great soccer nation, Brazil is also known for its highly entertaining and colourful carnivals. This SG Interactive powered slot game can be found in the Williams Studio of awesome casino slots and is based on the Brazilian carnivals, well of course 🙂

Note that this online slot machine comes with 5 reels and 40 paylines. Below, we share with you all you need to know about this iPad, iPhone or Android compatible slot game. 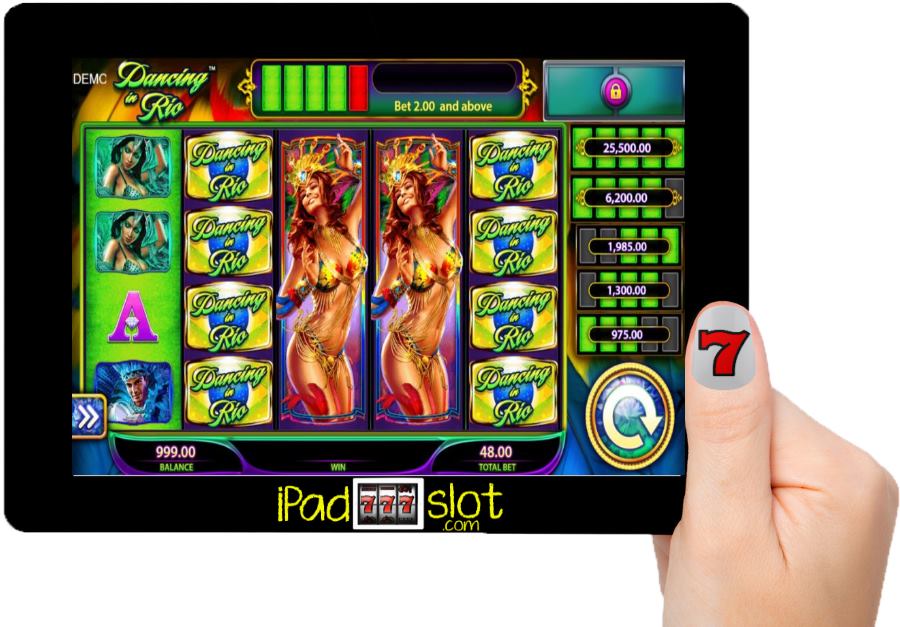 ** Did you know that the Williams Dancing in Rio slot game might be available to play for free on your iPad, iPhone, Android, Windows device with an app, or on your PC or Mac. Just take a look at our FREE games page here. **

A beautiful and colourful wall provides the background to this online slot game. The reel section is covered by a purple colour so it looks rather sexy and in tune with the game genre.

The symbols that players will find on the reels in the game include the dancing queen, samba girl in red, samba girl in blue, game logo icon, and intricately designed traditional card symbols. 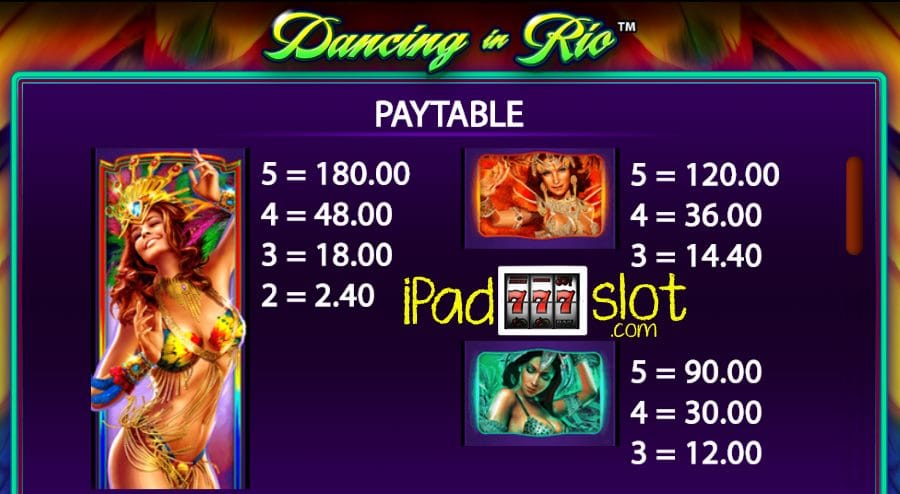 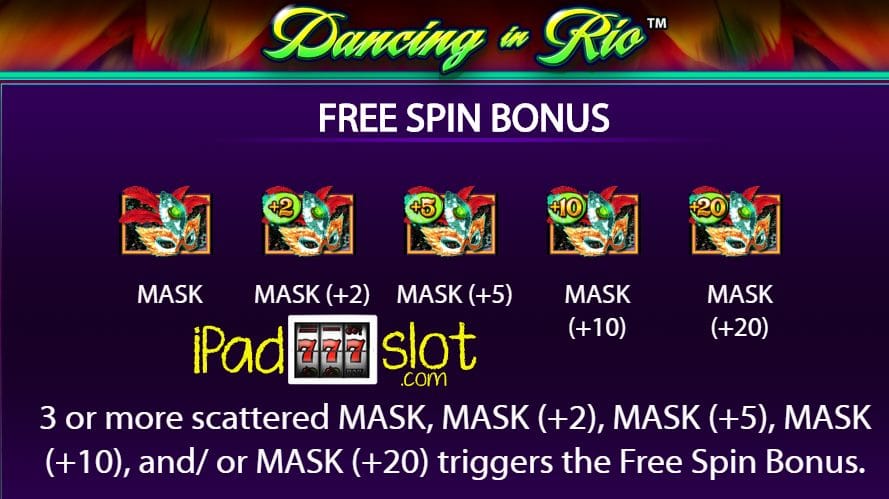 Dancing in Rio online slot game comes with a number of progressive jackpots. The jackpots are highlighted to the right of the reel set. To trigger any one of these progressive jackpots, the player has to land the green trigger backgrounds on four consecutive reels. 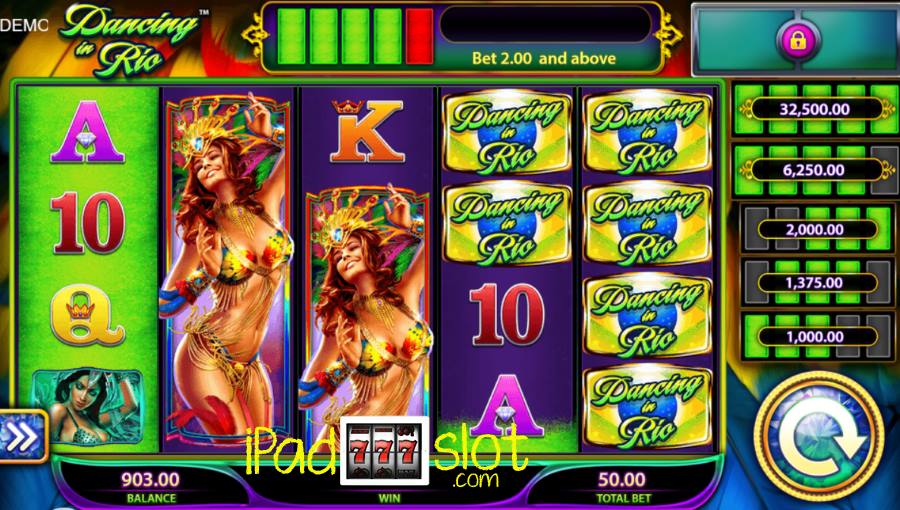 Dancing in Rio is a stunning game graphics wise which will appeal to all types of players. This iPad slot game gets an 8.6 point rating out of 10 points and it can be played for real money from our iPad casino guides.

Sahara Gold Lightning Link Free Slots (Pokies) G... Thinking of going on a trip that is somewhat different to the norm, then this Aristocrat iPad slot makes it easy for you to visit one of the world’s biggest des...
Black Knight Barcrest Free Slots App SG Interactive powered Black Knight comes with a medieval theme right from the Barcrest Studio. In this online slot, the player meets the black knight, a warrio...
Showdown Saloon Free Microgaming Slot Game Guide Showdown Saloon is a game from Microgaming which comes with a rather awesome theme. As such, when spinning the five reels of this slot, the player will be see r...
Sun & Moon Free or Real Play Slots App In Mayan astrology calendar, the Sun & the Moon are considered to be the symbols of prosperity, fortune, and wealth. Taking this into consideration, this on...
Cash Express More Chilli Slot Free Play Guide Cash Express More Chilli is a fun game from Aristocrat which comes with a Mexicana theme. Mexicans are known for their love for chilli and in this online slot m...
Play it Free Aristocrat 5 Miners Gold Slot 5 Miners Gold is a free pokies machine which comes from the Aristocrat company. In this online slot machine, players will be taken inside a gold mine where they...
Shamans Dream Free Aristocrat App Review & ... With Shamans Dream, you will step into the fascinating world of Native America & discover the most sacred & oldest traditions. This is another online vi...
Sirens Free IGT Slot Game Guide When talking about sirens, it's only normal that the first thing that comes to the minds of many are the ‘whistling’ electronic ones used to alert someone. Fas...
Exotic Cats Microgaming Slot review Exotic Cats Online Slot Game Review Exotic Cats is an online slot from the Microgaming company. As players can probably tell from the title, this game is all a...
Champion Raceway Free IGT Slot Game Guide Champion Raceway is an online slot machine which comes from the IGT company. Champion Raceway comes with a horse racing theme hence the game is a perfect propos...
Pharaoh Rising IGT Slots Game Review This Egyptian themed video slot from IGT is inspired by the tales of ancient Egypt where the Pharaoh was the wealthiest and most powerful individual owning ever...
Aristocrat Dragon Link Panda Magic Free Pokies G... There are several games in Aristocrat’s ‘Dragon Link’ family of slots, Panda Magic was one of the first titles to be released. What makes these pokies machines ...
Aristocrat Mammoth Thunder Slots Free Play Guide This is an popular iPad slot game released by Aristocrat Technologies. "Mammoth Thunder" presents the beautiful theme of a native wildlife where the players wil...
Aristocrat Wonder 4 Stars Slots Free Play Guide "Wonder 4 Stars" is an exclusive Multi-Play masterpiece from Aristocrat that can be played for free on an iPad or for real money at many casinos around the rock...
Pearl River Ainsworth Slot Game App Review Pearl River is an aquatic-themed slot game from the Ainsworth stable of super pokies. This slot has a number of elements that make it appealing. First of all, i...
Big 5 Safari Slots by IGT Free Game Guide A trip to Africa would not be complete if you don’t visit Serengeti or any other great African plain where you get to catch a glimpse of the Big 5. For those wh...
Red Tiger Gaming Lucky Fortune Cat Slots Guide This is a Chinese-themed casino slot game which is both unique and gives the players something new to try in format. There are total reels of 5 and about 20 of ...
Scatter Magic 2 Free Slots Game Guide Casino game players know that when it comes to slot games there is one icon that has the power of transforming the player’s fortunes quickly due to its magnific...
Lucky Twins Pokies Free Play Guide This is a very simple Microgaming iPad slot especially for new players with all the Asian colors that ties in the game theme very well. There are no frills or c...
Desert Spirit IGT Free Slot Game Guide Desert Spirit from IGT is a slot game that takes you to the Southwest, players get up close with native Americans on the reels. Fast Start Desert Spirit IGT Fr...
Tags: Dancing in Rio slots, Rio Carnival slot, WMS free app, WMS free iPad pokies, WMS free iPad slots,