The Dark Ninja by Zeus Play is an above average iPad free or real money slot machine game which is based on the lives and surroundings of a Ninja. Right from the past tales, Ninja’s are rendered to be a powerful source of cracking secret missions and undertaking assassinations as good Ninja’s do 🙂

The game contains 20 paylines and 5 reels for some nice pay-outs. Dark Ninja has an attractive dark-colored theme with Japanese folklore and alluring designs. With a maximum of 30 coins per payline and some awesome bonuses this game is sure to keep your casino credits in the black. I did find the flourescent colours in the symbols especially the red made me a wee bit dizzy while spinning the reels. 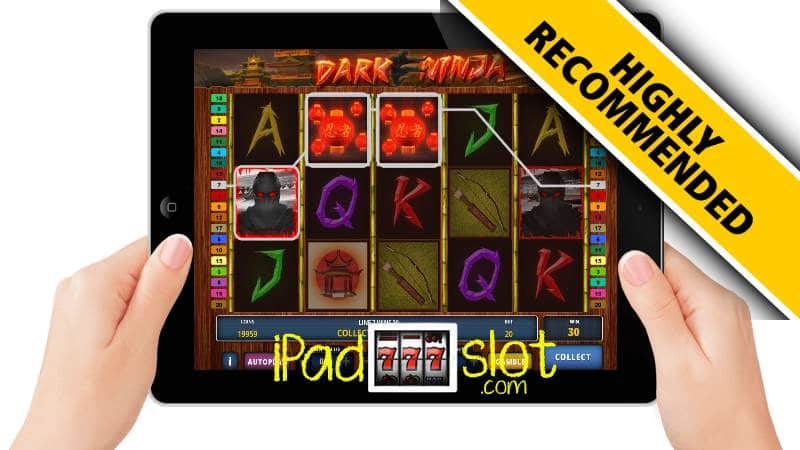 ** The Zeus Play Dark Ninja slot game may be available to play for free or real bucks on your iPad, iPhone, Android, Windows device, PC or Mac. Just take a look at our online casino guides here. **

The game contains 12 symbols in all. It has characters with symbols like Geisha and castles within the slot. 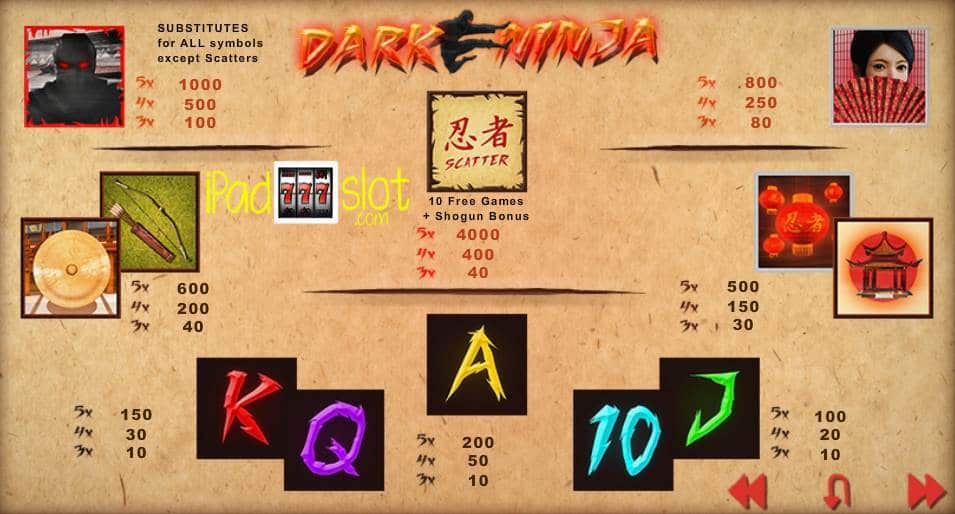 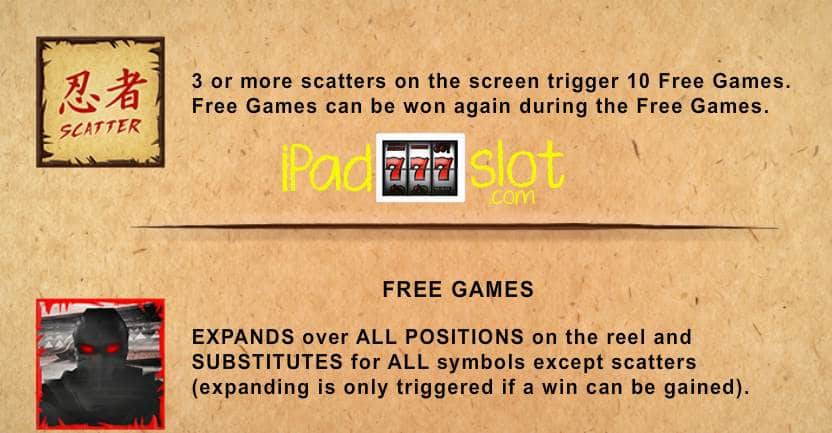 Dark Ninja by Zeus Play is a classic iPad slot machine game which has all the requirements you will love. Likewise, the bonus payouts is quite attractive for players. The score we give is a 7.0 from 10 points in our guide.

Elvis the King Lives By WMS Free Play Game Guide The king has not left the building, in fact he has been themed into a great iPad compatible slot game. Elvis the King Lives has been created by WMS (Williams In...
Island Eyes Free IGT Slots Game Island Eyes is an online slot machine which comes from the IGT company. Island Eyes is an adventure-themed game that takes the player deep inside a thick forest...
Jinfu Long Online Slot Review There is thousands of oriental themed slots in the market, there are a few that manage to get everything right. One such game that makes the grade is the Playte...
Three Kings IGT Free Slot Game & Guide Three Kings is an online slot machine which comes from the IGT company. The game is based upon the legend of the Three Lion Kings. This, therefore, means that w...
Deco Diamonds Slot Game Guide Deco Diamonds Slot Game Review Deco Diamonds is a game which comes from Microgaming. As can be deduced from the title, this slot comes with a diamond theme hen...
The Wizard of Oz Emerald City WMS Slots App The Wizard of Oz Emerald City is an online slot game from SG Interactive. The game is one of many ‘Wizard of Oz’ themed slot games to come from the same develop...
Frozen Inferno WMS Casino Slot App Frozen Inferno is an SG Interactive powered Williams iPad slot game which combines two things that do not generally mix in the ‘conventional’world i.e. ice and ...
Six Acrobats Microgaming Free Slot Guide Six Acrobats is an online slot machine which comes from Microgaming. This game has an oriental theme hence it’s awesome for players who love playing iPad slots ...
Whales of Cash Deluxe Free Slots This is an ocean-themed slot game powered by Aristocrat which stays true to its title in a big way. All the action in this slot game is primarily focused on the...
Pharaoh’s Tomb Novomatic Free Slot Game Guide According to Egyptian history, Pharaohs during their time were among the world’s most powerful and wealthy individuals in the land. However, when they died, Pha...
House of Cards Free IGT Slots Game Review For many people, politics is an entertaining game; if your view on politics resonates with this assertion, then you are going to find this IGT powered iPad slot...
NextGen Tianlong Slots Game Review The Dragon is a sacred symbol in the oriental way of culture because it is thought to be lucky for the people. This iPad slot machine has been developed jointly...
Jewel In The Crown Barcrest Free Slots Guide Jewel In The Crown is a Royal themed slot game developed by SG Interactive and Barcrest. This five reels online slot game solidifies the fact that SG Interactiv...
Magic Pearl Lightning Link Aristocrat Free Pokie... Aquatic themed games are popular with players and great pokies like the Turtle Treasure, Dolphin Treasure and Lobstermania are the great ones that come to mind ...
IGT 777 Sizzling Hot Roll Free Slots This is a game from the good old days but it's still an entertaining slot from IGT plus it's iPad and iPhone compatible. This game is pretty simple, it doesn’t ...
Aristocrat Zorro Free Online Slot Game Guide The Zorro online slot game is powered by Aristocrat Technologies, it features a variety of twists and turns in the bonus features that we keep you entertained a...
Aristocrat Aztec Goddess Pokies Free Play Guide With Aztec Goddess slot game, you will undertake a virtual trip to the deep jungle of Mexico & discover the mysteries that are hidden beneath the mighty pyr...
Faust Novomatic Slots Game App Faust is a themed iPad slot game on a German legend who made a deal with the Devil, how cool is that! it's powered by Novomatic so you know it's gonna be great....
Super Red Phoenix Free SG Slot Review Soar with the dragons and become one in this Bally - Scientific Gaming Interactive video slot game offering a number of exclusive features that is sure to excit...
Jade Tiger Ainsworth Free Slots App Jade Tiger is an Asian themed slot game with a particular focus on Asian animals including the tiger. When spinning the five reels of this Ainsworth powered slo...
Tags: Asian themed slots, Dark Ninja Slots, Zeus Play free app, Zeus Play free iPad pokies, Zeus Play free iPad slots,