This slot is just as good if not better that the free Dolphin Treasure iPad pokies app by Aristocrat.The Dolphin Reef game takes you on an adventurous journey in a reef that is full of wonderful sea creatures in search for sunken treasure. As you swim in the reef, you will have a chance to see dolphins, clown fish, turtles, starfish and seahorses.

You will get handsome payouts for spotting these sea creatures. The game features 5 reels and 20 pay lines. During game play, should look out for the bonus sunken feature that is triggered when you play bonuses that include a scatter bonus, wild bonus, a free spins feature and a re-spin feature. 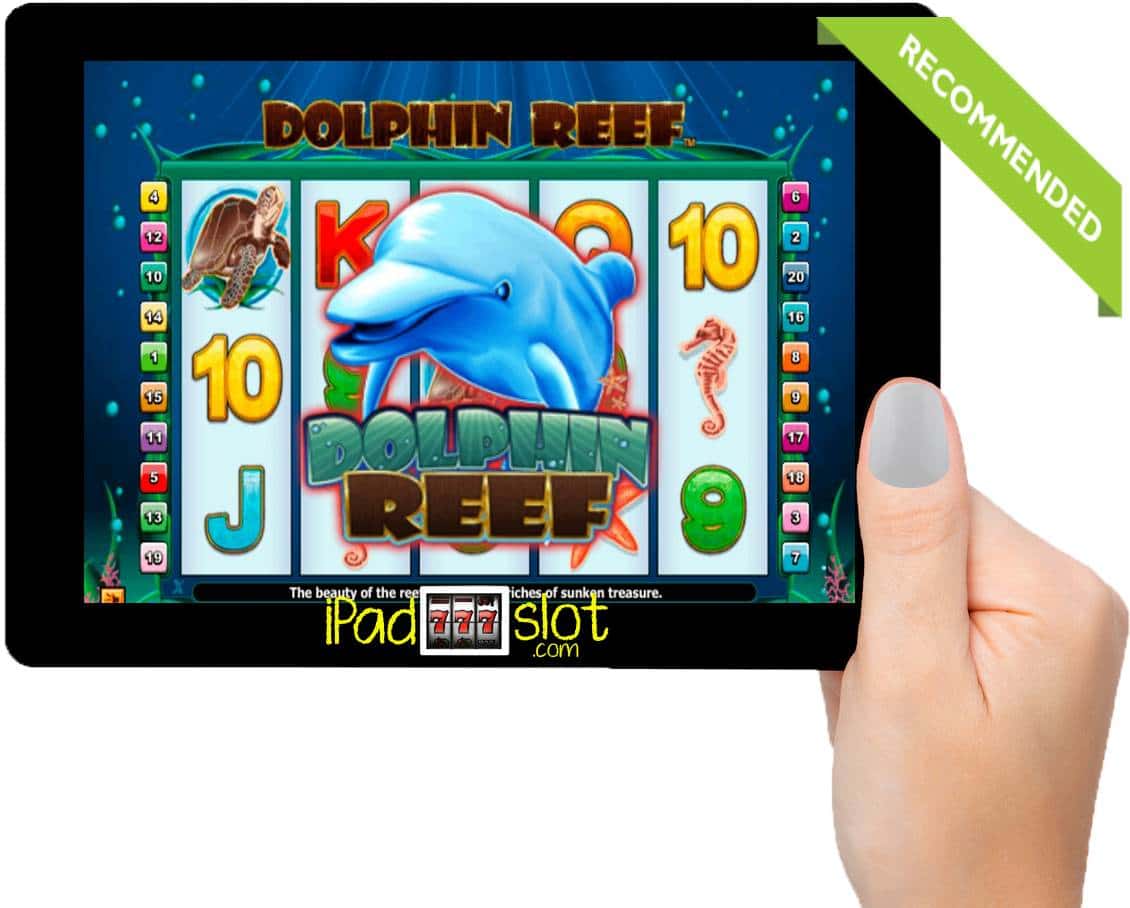 This iPad slot game app was developed by Playtech so you know it’s gonna be good. It is one of the new generation video slots from this developer. If you have been looking for a chance to swim with the dolphins, it is going to give you a sneak peak of how it will feel like. It is great for low to mid rollers that can spend anywhere between 0.01 and 1000 per spin. 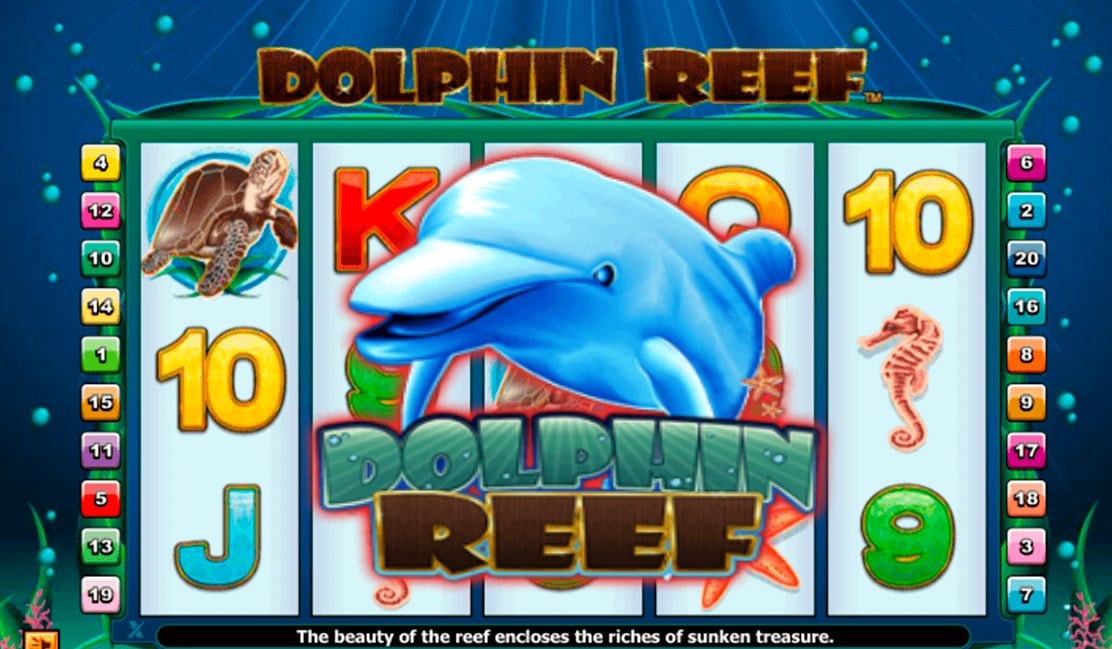 The following are the special features in the Dolphin Reef slot game.

The cheerful-looking dolphin is the wild symbol. It can substitute for all other symbols to form winning combinations except the scatter. It also acts as the bonus symbol that can activate the free spins.

The scatter symbol is a locked treasure chest.

When two dolphins appear on reels 2 and 4, free spins will be triggered. In fact, the dolphin will only appear on these two reels, something that impacts his usefulness as a wild symbol. You will get 5 free spins but the second and fourth reels will expand and become totally wild. As a result, you will be able to win a lot with every spin. 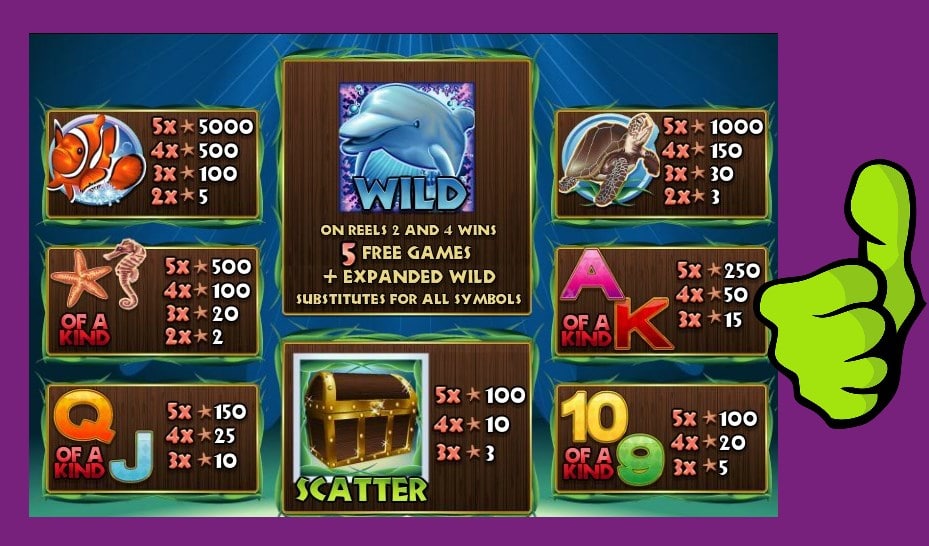 If the dolphins happen to appear on the second and fourth reel at the same time, the re-spin feature will be triggered. The dolphins will expand to cover these two reels while the first, third and fifth reels will be re-spun 5 times.

You can gamble your wins by clicking on the Gamble button that is located below the reels. You are supposed to play a game whereby you will predict the next playing card and stand a chance of doubling or quadrupling your wins.

When you play Dolphin Reef slot on your iPad, you can be sure of swimming away with some really nice payouts. It has lots of fun characters, staking options and lots of lines. 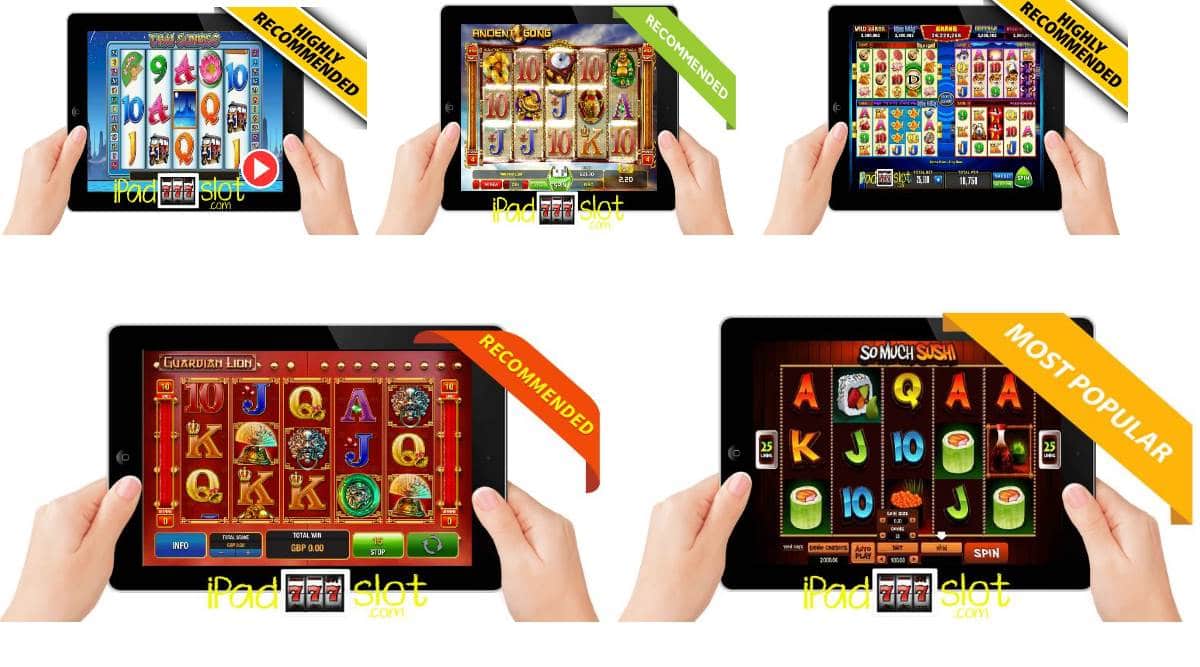 Super Red Phoenix Free SG Slot Review Soar with the dragons and become one in this Bally - Scientific Gaming Interactive video slot game offering a number of exclusive features that is sure to excit...
Wonders of Africa Free IGT Slots Game Guide Different continents and regions are known for different things. The European continent is known for its brilliant medieval and modern day architecture, the Sou...
Golden Peach by Aristocrat Free Slots Guide If you are an avid fan of Aristocrat free iPad slot games, you would have taken virtual trips to various destinations on the game reels already at Heart of Vega...
Aristocrat Panda Magic Free Slots Game Panda Magic is an online slot machine from Aristocrat which comes with an animal theme. As can be deduced from the slot’s title, the animal theme in Panda Magic...
Family Guy Free IGT Slot Game App Guide Family Guy easily ranks as one of the most popular animated comedy sitcoms that have ever been produced since the year of 1999. Created by Seth MacFarlane the F...
Cats & Dogs Slots by IGT Game Guide Cats & Dogs is an animal themed slot game from IGT. This slot is all about the most popular domesticated animals (cats and dogs) as the graphics i.e. the ba...
Dragon Spirit Online Slot Review This dice-themed slot from EGT takes you right into ancient China with its graphics and soothing background music. By merging dice-throwing and Chinese wildlife...
Yokozuna Clash Free Slot Review The Yokozuna Clash Slot is set to be the ultimate battle of sumo wrestlers on the reels, with the lucrative chance of winning some handsome rewards. It is set i...
NextGen Tianlong Slots Game Review The Dragon is a sacred symbol in the oriental way of culture because it is thought to be lucky for the people. This iPad slot machine has been developed jointly...
Astronomical Magic Free Konami Pokies Game Astronomical Magic is an online slot machine which comes from the Konami company. As one can deduce from the title, this free pokies game does come with a magic...
IGT Wishwood Free Slot Game Guide Wishwood is a mythical themed slot game which comes from the IGT company. In this mythical world, players can simply make a wish and whatever they wish for will...
Microgaming Reel Talent Free Slot Review Reel Talent is a cartoon themed slot game from Microgaming in which different animals take to the stage to showcase their talent singing. Reel Talent Slot Revi...
How to Play Guide Bloopers Slot by Elk Elk a casino game developer based in Sweden vouched not to release many casino slots but instead work on releasing a few quality games that will leave players a...
Big Red 2 Free Slots Game Review Classic slots are a favourite of most gamers and in this slot, Aristocrat Gaming fuses elements of classic slots and also elements of modern video slots in brin...
GameArt Dancing Lion Free Slots Guide Having pay lines of 10, reels of 5 and rows of 3, this iPad casino game named Dancing Lion is quite popular in the world of Asian themed games. A creation of Ga...
Red Tiger Gaming Imperial Palace Free Slots Red Tiger Gaming has come up with the ancient Chinese kingdom themed Imperial Palace pokies game. The game gets 5 reels and 20 pay lines. Players can bet betwee...
Jaguar Mist Free Mobile Pokies app by Aristocrat The Jaguar Mist mobile pokies app by Aristocrat Gaming is a popular online slot and is offered by Heart of Vegas. It isn’t very new in the market and is most po...
Hula Nights Free Barcrest Slots App Hula Nights is a Hawaiian themed slot game which comes from the SG Interactive Barcrest stable of must play games. In this iPad slot game, players get to take a...
Cosmic Fortune iPad Slots Review Cosmic Fortune is the newest iPad slot to be released by NetEnt and it is surely a great game to play for real money. The game is based on an alien invasion and...
Mr Cashman Magic Eyes Free Pokies Game Mr Cashman Magic Eyes is an online slot machine which comes from the Aristocrat company. One word from the game’s title i.e. ‘Magic’ does reveal the theme of th...
Tags: Dolphin Reef iPad Pokies, Playtech free iPad slots, Playtech iPad pokies,