Double Happiness is a bright and lively slot game designed by Aristocrat Gaming. This is a 5 reel and 25 pay-line online slot. The design is based on an Asian theme supported by symbols like dragons and icons inscribed with Chinese writings.

You can play free slots like Double Happiness by Aristocrat pokies on an iPad, iPhone or Android devices direct from our site. 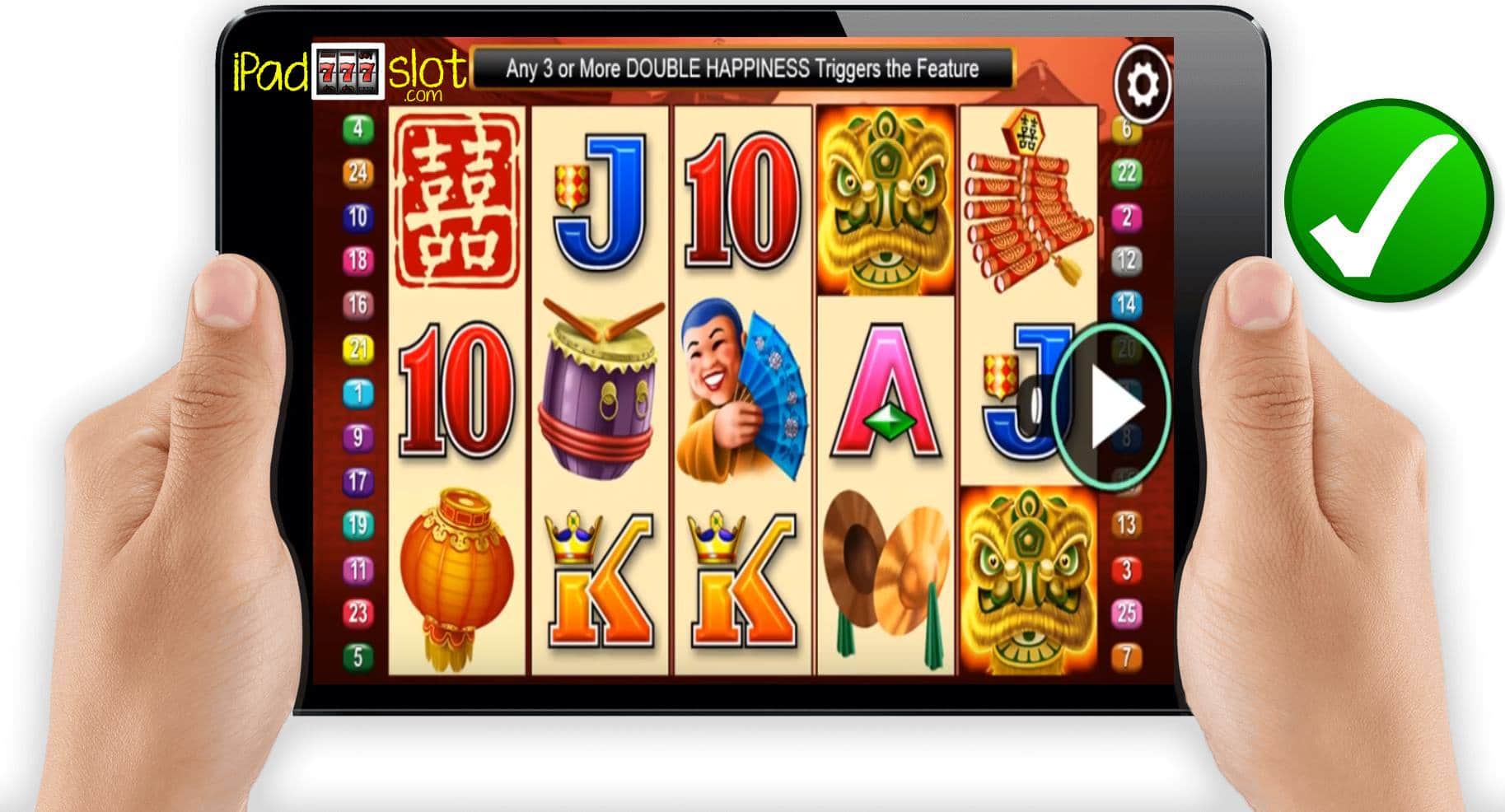 Double Happiness is designed with 5 reel with 3 rows and 25 fixed pay-lines. These are placed against a background featuring Chinese structures in front of a glowing sunset. The symbols use in the game are very thematic. Red is the primary colour in the game. Landing winning combinations is accompanied by vivid video and sound effects.

Highly valued symbols include a pair of green-tasselled symbols, a string of fire crackers, a golden lantern and a ceremonial drum. The Chinaman peeking behind a blue fan is the highest symbol. A fierce ceremonial dragon is the wild card of the game.

It is used to substitute all other pokies symbols except for the scatter image to form winning payline combinations. The red Double Happiness scatter is used to trigger the free spins round. It features poker symbols which are colorfully designed. These are Ace, King, Queen, Jack, Ten and Nine. 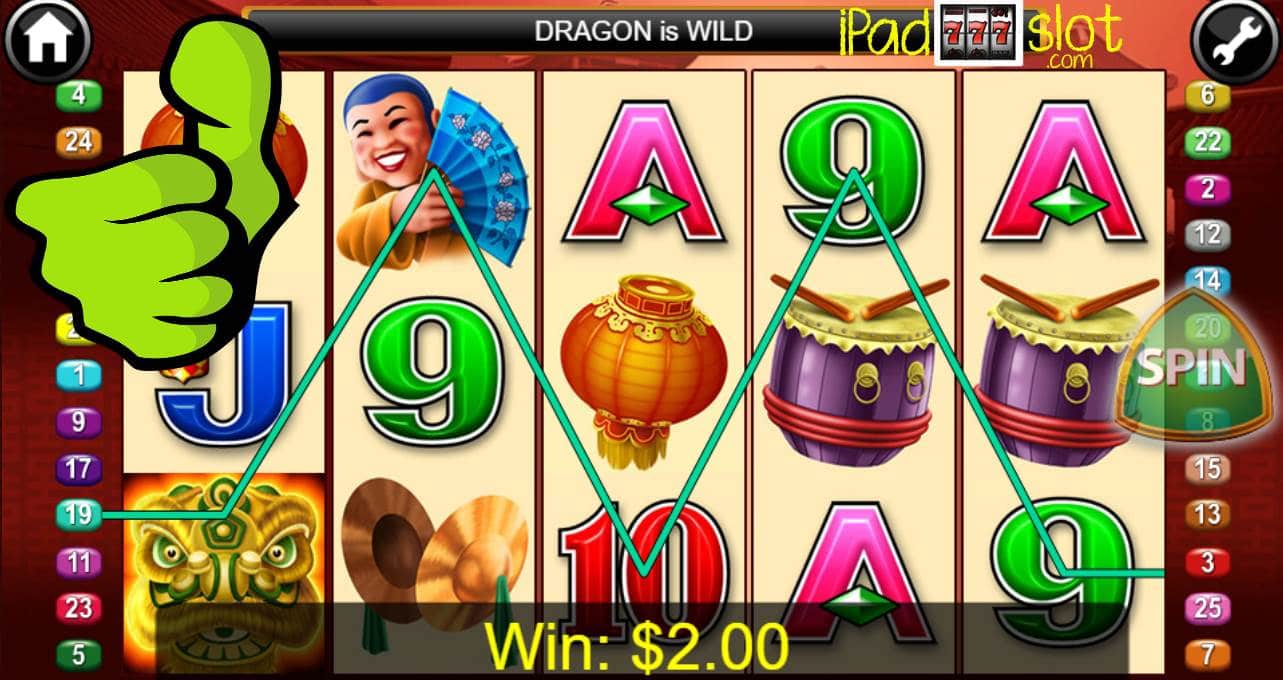 Players are allowed to experience the mysterious land of China while earning prizes. Graphics, sounds and symbols features are very true to the Asian theme. The red colour is also consistent across the grid. Double Happiness has a simple and straightforward game play.

It is available in demo mode which allows players to gain experience before playing with real money, just grab the free Aristocrat pokies app to give it a go.

Players are allowed to maximize their winnings using the bet range and pay-lines provided.

Free spins can be triggered easily plus they attract wild wins. The gambling feature is provided to players who feel are lucky enough to double or quadruple their winnings. This game is full of fun and action.

From Dawn Till Dusk Novomatic Free Slots App Rev... From Dawn Till Dusk is a branded slot game developed by Novomatic. This slot is a game adaptation of the movie which goes by the same name i.e. From Dawn Till D...
Safari Spirit Ainsworth Free Mobile Slot App Safari Spirit is an online slot game from Ainsworth which comes with a African wildlife theme. Players playing this online slot machine can expect to be virtual...
Medusa 2 iPad Slot Game Preview and Free Play Following the amazing success of Medusa, NextGen is offering a sequel to the iPad slot called Medusa II. With this game, the theme remains identical to the orig...
Sirens Free IGT Slot Game Guide When talking about sirens, it's only normal that the first thing that comes to the minds of many are the ‘whistling’ electronic ones used to alert someone. Fas...
Best free slots for iPads with no downloads Jurassic Giants is an exhilarating iPad slot from Pragmatic Play and this cracker game can be enjoyed free with no downloads of apps required, yep i bet your a ...
Aristocrat More Chilli Emerald Edition Free Slot... Crank up the heat in this deliciously diabolic Mexicana themed online pokies game from Aristocrat, Australia’s number 1 gaming brand with roots in land based ga...
Hexbreaker 2 Online Slots Free Game & Revie... The crazy jumping black cat is back in the Hexbreaker 2 online slot that's compatible with iPad, Android and iPhone. This slot game from IGT is about black magi...
Pelican Pete Aristocrat Free App by Aristocrat Pelican Pete is video slot designed By Aristocrat Technologies and can be played free with the iOS app from Heart of Vegas. It is a 5 reel and 50 pay-lines slot...
Butterfly Kiss by Aristocrat Free Game Review With Butterfly Kiss, players will get an incredible opportunity to experience an exciting slot game that features a beautiful & vibrant nature theme. By por...
Bombay Slots Game by IGT Free Play Guide This Indian themed slot from IGT borrows much of its inspiration from other IGT themed slots as the setting is set against a wealthy themed tone. This game take...
Treasures of the Pyramids Free IGT Slots Guide Egypt is known as the home of pyramids. It's not difficult to see why this is so because if you plan a visit to Egypt today you are going to find some incredibl...
Burning Desire Microgaming Slot Game Guide Developed by Microgaming, Burning Desire is an online video slot machine for players who love old fashioned style pokies. It has classic icons and not character...
Yokozuna Clash Free Slot Review The Yokozuna Clash Slot is set to be the ultimate battle of sumo wrestlers on the reels, with the lucrative chance of winning some handsome rewards. It is set i...
Dolphin Reef Pokies Playtech Free Play Guide This slot is just as good if not better that the free Dolphin Treasure iPad pokies app by Aristocrat.The Dolphin Reef game takes you on an adventurous journey i...
Preview of the Flowers NETENT iPad Slots Game With Flowers, iPad players will enjoy a flowery themed game that is packed with features. The game from NETENT is fun in free play and a real money version and ...
Reel King Free Spin Frenzy Slots App Reel King Free Spin Frenzy is a "back to basics" fruit themed iPad slot game from the Novomatic. This video slot app is one the best in the Reel King slot serie...
Three Kings IGT Free Slot Game & Guide Three Kings is an online slot machine which comes from the IGT company. The game is based upon the legend of the Three Lion Kings. This, therefore, means that w...
5 Dragons Pokies Free Play & Game Guide Rev... In the 5 Dragons iPad pokies game from Aristocrat you can experience the might and majesty of these mythical reptilian creatures in one slot laden with eye cand...
Book of Maya Novomatic Free Slot Game Guide Many years after the fall of the Mayan Empire, a lucky adventurer discovered a Mayan temple that is still standing in Central America. Many themes of this perio...
Razor Riches Aristocrat Free Slots Review Riches come from anywhere, sometimes even from the unlikeliest of places. In this game players can discover that riches come from everywhere and as such, it's i...
Tags: Aristocrat free iPad pokies, Aristocrat free iPad slots, Aristocrat Free Slot App Article Tags, Double Happiness iPad Pokies, Double Happiness iPad slots,