Are you ready to embark an exclusive gaming adventure by exploring the hidden treasures of the mysterious Dragon Emperor? Well, if yes, then the Aristocrat “Dragon Emperor” iPad slot game will be quite ideal for you. This is another awesome Asian themed slot by Aristocrat and it’s just as good as 5 Dragons, 5 Frogs, Wild Panda and Lucky 88.

Here, the legendary ancient dragon lives in a mystic snowy mountain and protects his fabled treasure. As a player, you will unleash a magical journey and discover those secret treasures.

You can play free slots like Dragon Emperor HERE, it’s from Aristocrat pokies and you can take a spin on an iPad, iPhone or Android devices direct from our site. 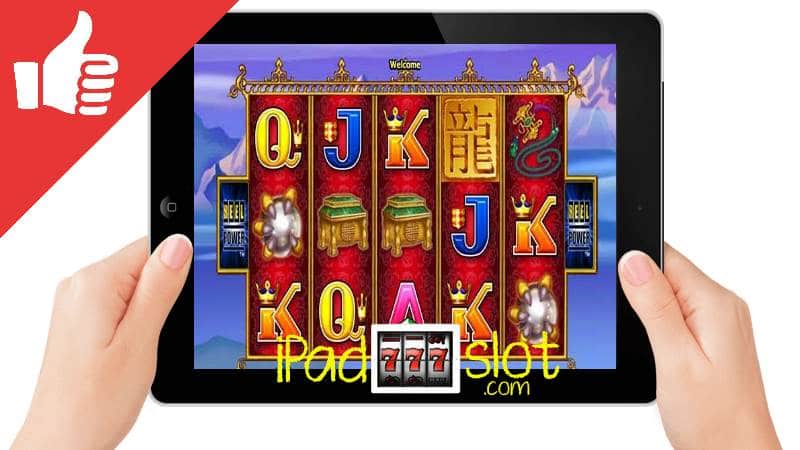 Other that that, you will even find the scatter symbol of this slot game – “Golden Square”. This is another potent symbol that unlocks the free spin round.

The total bet will be automatically derived from your input. Now, you can hit the “Spin” button and kick-start your gaming adventure! Here to note, all wins pay you from left to right (on adjacent reels).

This game is stacked with a myriad of exciting bonus features as listed below :

In general, 5 scatters offer you the highest number of free games i.e. 15. With 4 scatter symbols, you can win 10 free spins. Finally, with 3 scatters, you will be awarded 7 free spins.

Also note, an extra wild symbol appears on reel number # 5 during the “free spins” round and it improves your chances of winning.

During this round, it may also trigger the free spins feature and results in an exciting winning combination. Also note, the reel shuffle feature can be re-triggered (if you get lucky).

Many of its gaming symbols offer you generous payouts. For example, five scatters reward you with 40 coins. The other relevant details are described below :

Thus you’ve now revealed all the important features of this popular free pokies game. Now, get ready to venture forward into the amid mystical atmosphere, collect the secret treasures, meet the magnificent “Dragon Emperor”, and fascinate your overall Aristocrat iPad gaming experience or have a crack on more free slots at Heart of Vegas like The Amazing Big Top Gold, Goblin’s Gold, Jester’s Fortune, Bug Red 2 or the awesome Queen of the Nile pokies machine.

Nice little win in the video below :

Faeries Fortune iPad Slots How to Play Guide Faeries Fortune is an iPad slot game that has been developed by Big Time Gaming and it offers an attractive fairytale theme that will draw in many punters. Play...
Dragon Chi Online Slot Review Well, when it comes to the Eastern community, players ought to know that the coming of the New Year is celebrated by planting money trees and proceeding to pin ...
Rival Gaming Japan-O-Rama Free Slots Game The Japan-O-Rama iPad compatible slot machine game by Rival Gaming is a perfect fusion mixture of modern and ancient gaming structure. The game has characters a...
Wonder 4 By Aristocrat Free Play Game Guide "Wonder 4" is an excellent combination of four cracker slot games what could get better! play the iconic Pompeii, Wild Splash, everyone's favourite Buffalo and ...
Butterfly Kiss by Aristocrat Free Game Review With Butterfly Kiss, players will get an incredible opportunity to experience an exciting slot game that features a beautiful & vibrant nature theme. By por...
Bushido Code GameArt Slots App Bushido Code is a nice looking slot machine game by GameArt, and it is based on Samurai and Japanese philosophy of war and culture. Let's Play Bushido Code iPa...
100 Pandas Slots by IGT Free Play 100 Pandas is the most amazing free iPad poker machine by IGT and brings you excitement and possibly bundles of cash also along the way. This game consist of 5 ...
Shogun of Time Microgaming Slot Game Review Shogun of Time Slot Game Review Shogun for Time is game which comes from the Microgaming company. This slot machine comes with a Japanese fighter theme. Pla...
Pompeii Deluxe Aristocrat Free Slots Game Guide Pompeii was one of the most famous ancient Roman city which was buried under the volcanic ash when Mount Vesuvius erupted back in AD 79. The Pompeii Deluxe slot...
Go Bananas iPad Slot Machine Review and Free Pla... Many players will go ape over Go Bananas and the entire iPad slot machine game is based on monkeys as you already worked out. The symbols that are used on the r...
Hot Frootastic Free Barcrest Fruit Slot Game Gui... Hot Frootastic is a fruit themed slot game which comes from the Barcrest / SG Interactive company. This game is highly generous as lining up just three fruits o...
Six Acrobats Microgaming Free Slot Guide Six Acrobats is an online slot machine which comes from Microgaming. This game has an oriental theme hence it’s awesome for players who love playing iPad slots ...
Mighty Cash Double Up Lucky Tiger Free Pokies Australian leading pokies developer, Aristocrat Gaming, is the brain behind Mighty Cash Double Up Lucky Tiger video slot. This is one of the most attractive slo...
Mild Rockers Lightning Box Free Slot Game Guide Mild Rockers is an iPad compatible slot which comes from the Lightning Box stable. This game comes with a clubbing theme meaning that as players spin the reels,...
Just Vegas Online Slot Review This slot is all about lights, action, and glamor of Las Vegas. The developers at Amaya Gaming have made sure that if you love the city of Las Vegas, you would ...
In the Shells IGT Slots Game Guide This is another nautical themed slot game from IGT developed in the same genre as other water and ocean themed slots from the same developer. Quick Start Guide...
Spartacus Call to Arms Williams Slot Free App For players who have played Spartacus: Gladiator of Rome, you will realise that there are many similarities between that game and Spartacus Call to Arms; this i...
NETENT Jumanji Free Slots Game Guide Jumanji is a branded online slot machine that comes from the leading game developer, that is, Net Entertainment or NETENT as it's also known as. More bonuses th...
12 Awesome Free & Real Money Bally iPad, iP... Players looking to have a spin on Bally slots can expect to come across Asian themed, African themed, nature-themed, aquatic themed, ancient mythology themed, r...
HONEY TRAP OF DIAO CHAN FREE SLOT REVIEW Just like many continents, the Asian continent has had its own fair share of wars many dynasties were overthrown while new Emperors emerged. As a way of affordi...
Tags: Aristocrat free iPad pokies, Aristocrat free iPad slots, Aristocrat Free Slot App Article Tags, Dragon Emperor iPad slots,