Dragons Mystery is but one of many slot games that have a dragon-centered theme. Nevertheless, the highly original way in which it presents its motif makes it an instant standout.

To say that this slot theme loves dragons could prove to be an understatement, as pretty much all its symbols are dragons and is also packed with unique special features that highlights their awesome presence more. If these mythical beasts have always been your favorite, you can’t ask for a better slot game than this one from Stake Logic.

Dragons Mystery doesn’t depart from convention with its standard setup of 5 reels and 3 rows. Nonetheless, it does have a low amount of paylines, though, as it numbers only 10. And, players aren’t allowed to change the amount of lines they want to play.

You can set your Total Bet by setting the Bet/Line and Coin Value parameters in it using an integrated slider. Interestingly, winning combinations are made both ways, the traditional left-to-right direction and from right to left. 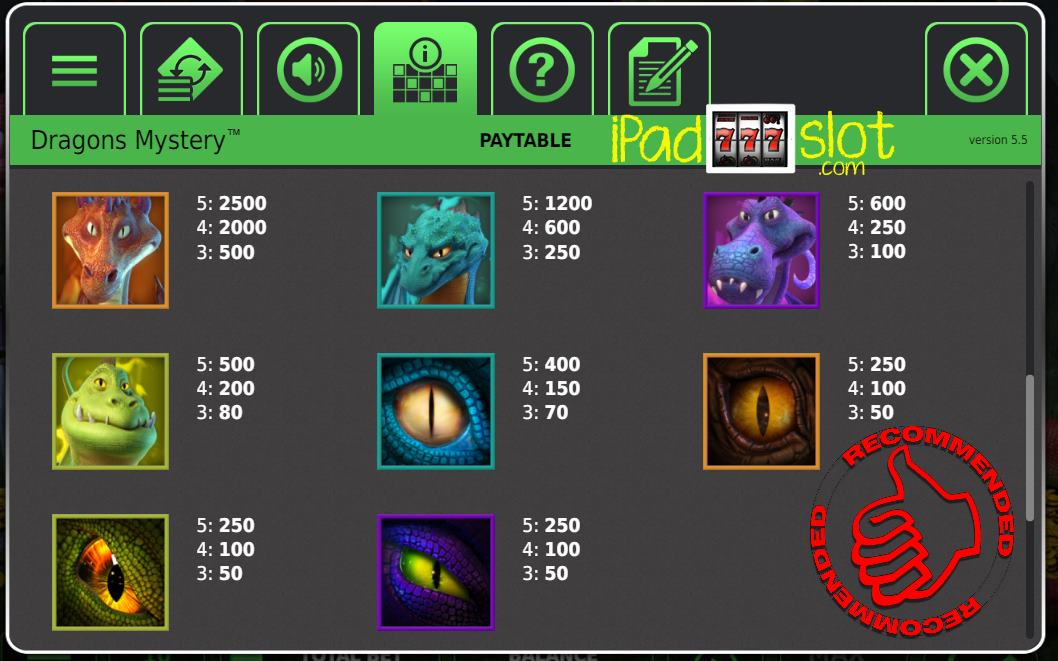 We give this iPad slot a score of 6.5 points from 10 possible.

Hot Shot Free Bally Slot Game Guide Hot Shot is any innovative slot game which comes from the Bally / SG Interactive company. The innovation behind this game is as a result of the game’s five reel...
Aristocrat Mighty Cash Outback Bucks Free Pokies... Mighty Cash Outback Bucks is an slot machine powered by Aristocrat. This game is the latest one in the ‘Mighty Cash’ slots series that is very popular both onli...
Miss Kitty Gold Free Slots App Guide Miss Kitty Gold is an pussy cat anime-themed game from the Aristocrat stable of awesome iPad and iPhone compatible slot games. This is a simple but elegant game...
Cluedo Who Won it? iPad Slots Free Play Guide Cluedo – Who won it? slot machine from IGT is an interactive suspense and crime themed game that is a cracker. It is based on a popular board game that goes by ...
Wild Fiesta’Coins Free Aristocrat Slots Ga... Have you ever done something crazy before? If not or if you are an introvert who doesn’t like doing the wild stuff, Aristocrat brings you Wild Fiesta'Coins slot...
Fortune Fox Free Ainsworth Slots App Guide Fortune Fox is an animal themed game from the Ainsworth stable of cracker iPad pokies machines. The primary focus of this app is on the fox as you would have de...
Bally Quick Hit Super Wheel Wild Red Free Play G... Quick Hit Super Wheel Wild Red comes from the Bally / SG Interactive company. The game comes with a retro theme and as such, gamers looking to play this online ...
Carnival of Mystery IGT Slots Game Guide This slot is one of IGT’s holiday-themed games that hits the genre score quite well. The slot is inspired by the Greek Orthodox and Western Christian festive se...
Dragon Emperor Free Play Aristocrat Slots Guide Are you ready to embark an exclusive gaming adventure by exploring the hidden treasures of the mysterious Dragon Emperor? Well, if yes, then the Aristocrat "Dra...
Cash Spin Free Bally Slots App Game Guide Cash Spin Slots made by Bally is one of the most simple slot games out there, so make sure you grab the free Bally iOS or Android slot app and get playing. Ther...
Roaring Riches Ainsworth Slot Free Play Guide Sometimes, all players need before deciding on a slot game to play is just settle for an Ainsworth title as you are always assured of a awesome gaming experienc...
Flamin’ Tiger Free Slots Game Guide One of the main reasons why safaris are the most popular holiday activities is that people get to see all kinds of animals over a short distance in complete saf...
Lucky Lady’s Charm Deluxe Free Slot Guide Lucky Lady’s Charm is a Novomatic powered iPad slot game that has a special focus on magic and sorcery. When spinning the five reels that come with 10 paylines ...
Fortunes of Atlantis Aristocrat Free Mobile Poki... Fortunes of Atlantis is an free mobile pokies app game by Aristocrat that is inspired by the sunken city of Atlantis. This mythical civilization & its cultu...
Phoenix Riches by Aristocrat Free Play Guide Phoenix Riches is an awesome iPad compatible slot game that offers you an ample amount of winning opportunities. This slot game boasts of featuring a special "M...
Lucky Hot 7s IGT Slots Game Guide Lucky Hot 7s is a video slot by IGT which takes one back to the glorious old days where all slot machines came with the default fruit theme, well they were the ...
Ainsworth Jade Emperor King Strike Free App Guid... Jade Emperor King Strike is a progressive slot game which comes from the Ainsworth stable of brilliant free and real money pokies machines. This Asian themed sl...
Gems Gems Gems Williams Free Slots Game Gems Gems Gems is an innovative Williams slot game which comes from SG Interactive. As suggested by the title, this game is all about gems, gems and even more, ...
50 Dolphins Free Ainsworth Slot App Guide The  50 Dolphins Slot game is another intriguing Marine-themed Ainsworth social slot that can be played at the Players Paradise Casino on your iPad for free (su...
Play Geisha Slots for Free or Real Money Nothing compares to the utter beauty of the Geisha, Japan’s traditional hostesses. The Geisha online slot brings their unique charm to the next level, complemen...
Tags: Dragons Mystery iPad slots, Stake Logic free app, Stake Logic free iPad pokies, Stake Logic free iPad slots,