Exotic Cats is an online slot from the Microgaming company. As players can probably tell from the title, this game is all about animals found in mostly Africa. As such, players can expect to encounter lions, leopards, cougars and tigers when spinning the game’s five reels.

Exotic Cats comes with  243 ways to win and it is a mobile-friendly slot game meaning that punters can enjoy the game on their mobile devices for free or real bucks. 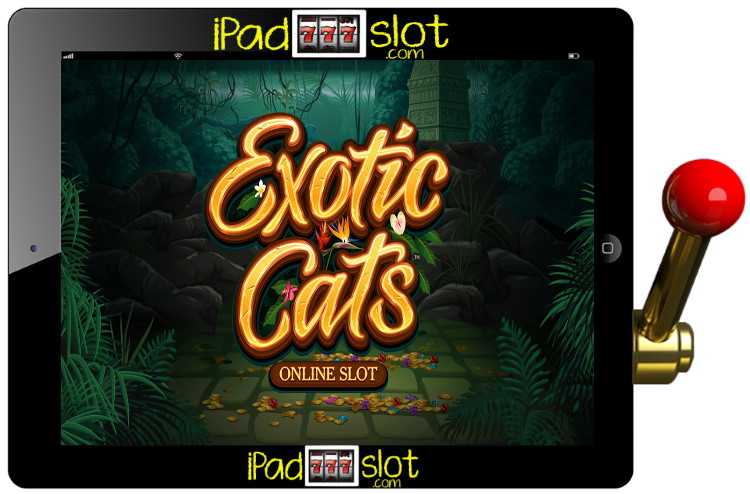 The backdrop of this slot machine is set against a green forest acting as the background.

The symbols that players will find on the reels when spinning Exotic Cats’ five reels include a lion, a tiger, a leopard, a panther, a cougar, Exotic Cats game logo icon, a beautiful lady, cat footprint and playing card suits.
**The Exotic Cats Microgaming slot and/or many similar games can been played today on your iPad, iPhone, Android or a PC for fun at our FREE slot games page here. **

Exotic Cats is a good slot to play, more so for players who are fond of big cat themed games.

Island Eyes Free IGT Slots Game Island Eyes is an online slot machine which comes from the IGT company. Island Eyes is an adventure-themed game that takes the player deep inside a thick forest...
Sun & Moon Free or Real Play Slots App In Mayan astrology calendar, the Sun & the Moon are considered to be the symbols of prosperity, fortune, and wealth. Taking this into consideration, this on...
Fortunes Way By Aristocrat Free Game Review If you're an avid fan of online slot games developed by Aristocrat & you want to enjoy a smooth & seamless gaming experience, then "Fortunes Way" will b...
Wacky Races Bally Free Slots App Wacky Races is a branded slot game developed by Bally Technologies. However, odds are, not many people may know where the game was adapted from if they were bor...
IGT Fishing Bob Free Slots Guide As you can deduce from the slot title, this IGT powered iPad compatible slot is all about fishing. You need to join Bob on his fishing adventure if you want to ...
Who Wants To Be a Millionaire Megaways Free Slot... Who Wants To Be a Millionaire Megaways slot is a branded slot game which was adapted from a popular TV production that goes by the same title i.e. Who Wants To ...
Choy Sun Doa Slots Free Play Guide Choy Sun Doa features to be the finest slots that is developed by Aristocrat with Asian flavours in the theme. The name of this game literally means "God of Pro...
Lightning Box Five Pirates Free Slot Guide Five Pirates is a game which comes from the Lightning Box company. Players looking to play this pirate-themed online slot will find themselves conspiring with a...
Sizzling Hot Novomatic Free Slots Game App Sizzling Hot is a Novomatic powered classic iPad and iPhone compatible slot which comes with a nice simple fruit theme. As is the case with most other classic g...
Cash Cave Ainsworth Free Slots App Guide Cash Cave is an online slot game from Ainsworth which comes with an cracker animal theme. From the title alone, not many players would guess that this slot game...
IGT Dungeons and Dragons Crystal Cavern Free iPa... Dungeons and Dragons Crystal Cavern is a mystical themed iPad slot machine designed and powered by IGT. In this game, the forces of evil are rising up against f...
Dragons and Pearls Online Slot Review Dragons and Pearls is a cracker Oriental themed casino game by GameArt, which consists of reels of 5 and rows of 3 with 25 paylines. Slot layout One can expec...
More Hearts Free Play Information "More Hearts" by Aristocrat features an impressive game play that comes with miscellaneous game symbols, such as gemstones, lions, birds, & other wild anima...
Firelight Slots Free Play Version Firelight is video slot designed by Aristocrat gaming and is a bit old but still a treat to play on an iPad. The famous land-based slot game is now available on...
Sun Chief Slots Free & Real Money Ainsworth... Ainsworth never lets down its customers and proved once again with the Sun Chief iPad slot game available at the Players Paradise casino. You can have adventure...
Cayetano Gaming Big Panda Slot Game Guide Pandas are almost on the verge of extinction in many countries unfortunately. We may or may not see these cute and lovely animals in large numbers after a few m...
The $100,000 Pyramid Free IGT Slot Game Guide The $100,000 Pyramid online slot machine is a game from the IGT company and was first released for land casino players in 2001. This online slot machine is a ga...
10 Great IGT Free or Real Money iPad, iPhone ... When it comes to game developers, there are few (if any) that are more accomplished than IGT. This company was established all the way back in 1975, since then,...
Piggy Jackpots IGT Slots Game Guide This IGT powered video slot is all about some cute little pigs as you can deduce from the slot’s title. Match as many fat little pigs as you can and you are gua...
Dolphins Pearl Deluxe Novomatic Free Play Guide Marine life is the central theme of Dolphins Pearl Deluxe online slot as you expect, and players who love a slot game that leans more towards these beloved sea ...
Tags: Exotic Cats, Microgaming android free pokies, Microgaming android free slot, Microgaming free app, Microgaming free iPad pokies, Microgaming free iPad slots, Microgaming iPhone free pokies, Microgaming iPhone free slot,