This is an entertaining and unique iPad compatible slot game from Betsoft. The slot introduces you to two twin sisters who will use their charm and magical powers to help you win. This Asian themed slot comes with 5 reels and 243 ways to win. This slot has a 96.90 Return to Player percentage on our reviewed game but other versions may be a little higher or lower at popular iPad casinos.

The background of the game is covered in a solid red colour which is a colour representing luck and happiness in the Far East. Standing on either side of the reels are the two twin sisters with a banner just above their heads indicating the number of paylines this slot game has. 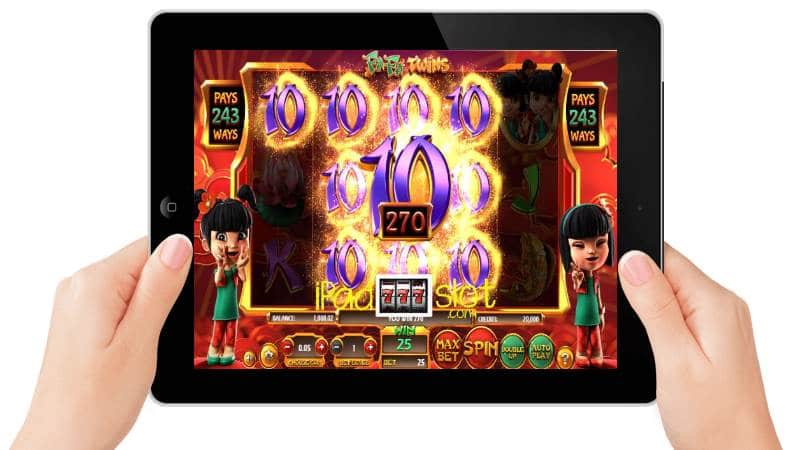 ** The Fa Fa Twins Betsoft slot machine may be available to play for free or real bucks on your iPad, iPhone, Android, Windows device, PC or Mac. Just take a look at our online casino guides here. **

On the reels are the symbols all resembling features common in Japan. These include a pouch of gold coins, golden cat, golden fish, fa-fa twins’ symbol, bear, red lantern, and cherry blossom. The slot also comes with traditional poker symbols i.e. Aces, Jack, Queen, and King. 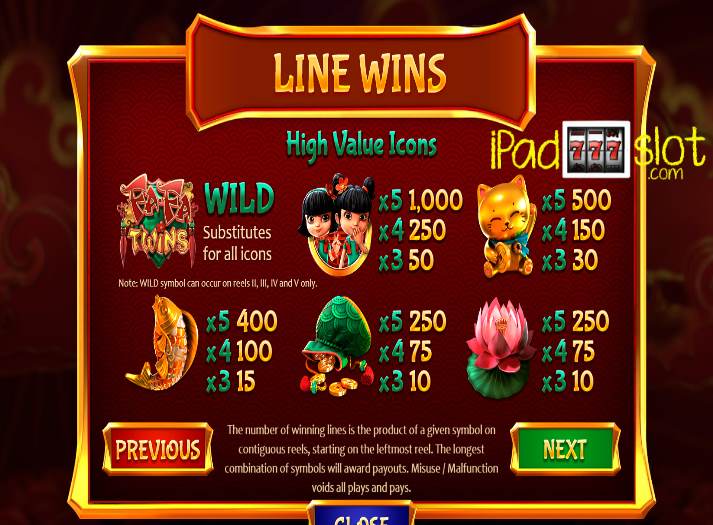 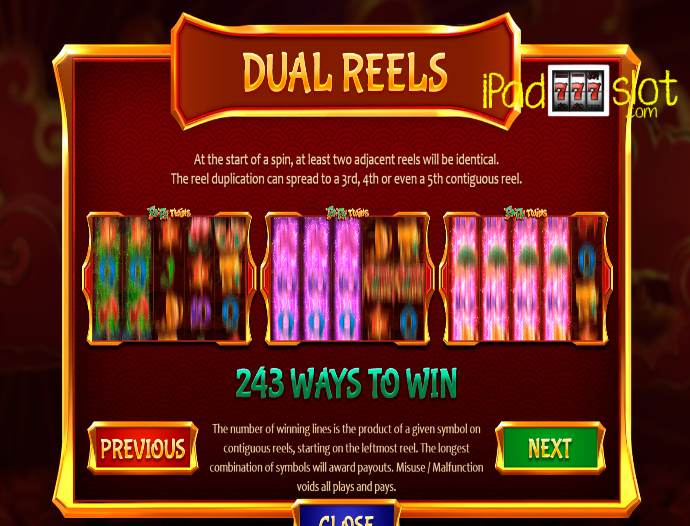 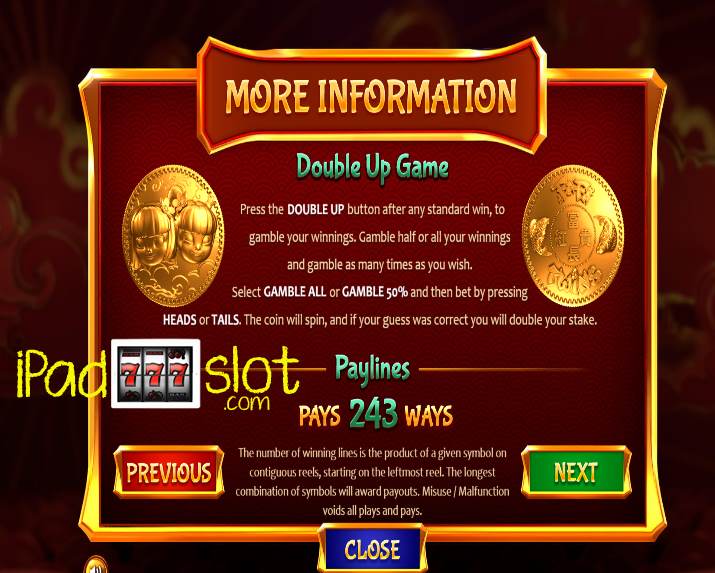 This is a good game for someone looking to try something new and unique due to the exciting dual reels feature. It gets a rating of 7.5 out of 10 points so it’s overall a nice Asian genre slot game to play for free or real money from our iPad casino reviews.

IGT Fishing Bob Free Slots Guide As you can deduce from the slot title, this IGT powered iPad compatible slot is all about fishing. You need to join Bob on his fishing adventure if you want to ...
Six Acrobats Microgaming Free Slot Guide Six Acrobats is an online slot machine which comes from Microgaming. This game has an oriental theme hence it’s awesome for players who love playing iPad slots ...
Play Free The Third Prince VS Aristocrat Slot If you fancy China and Orient themed free online pokies games, then you are going to love The Third Prince VS from Aristocrat Gaming. This new version has had s...
Dragon Dollars Free Ainsworth Pokies Guide Dragon Dollars is one of the best Asian themed online slot games to come out of the Ainsworth company. Ainsworth is an Aussie company which makes awesome pok...
Wolf Run Slots Game By IGT Free Play Guide Wolf Run is a Wolf-themed slot game from IGT. The game has 5 reels and 40 pay lines. The players can get to bet on a minimum coin size of 1 and this can go up t...
Dark Ninja Slots by Zeus Play Game Guide The Dark Ninja by Zeus Play is an above average iPad free or real money slot machine game which is based on the lives and surroundings of a Ninja. Right from th...
Timber Wolf Deluxe Free Slots Guide Aristocrat in this slot game brings you a game which takes place inside a huge scary forest full of vicious wolfs and tigers. Set in the middle of nowhere in a ...
Book of Oz Slot Game Guide Book of Oz Slot Game Review Book of Oz is an 10 payline online slot machine which comes from Microgaming. For those who are into fairytale books or movies, odd...
Valkyrie Fire Barcrest Free App Review Valkyrie is a Norse mythology themed iPad and iPhone compatible slot which comes from the SG Interactive stable of Barcrest games. This slot has a special focus...
Aristocrat High Stakes With Lightning Link Free ... Which iPad slot is your favourite casino game? For many people, this is a difficult question to answer as they do not have a single game that they can classify ...
In the Shells IGT Slots Game Guide This is another nautical themed slot game from IGT developed in the same genre as other water and ocean themed slots from the same developer. Quick Start Guide...
Barkin’ Mad Free Barcrest Slot Game Guide Barkin’ Mad is an animal themed slot game from Barcrest / SG Interactive with a special focus on mans best friend. In this game, the player will find himself in...
5 Dragons Pokies Free Play & Game Guide Rev... In the 5 Dragons iPad pokies game from Aristocrat you can experience the might and majesty of these mythical reptilian creatures in one slot laden with eye cand...
Disco Spins iPad Slot Game Free Play & Revi... Put on your bright clothes and take a trip back in time too enjoy the 80's era with Disco Spins, an iPad slot created by Net Entertainment. This game is fully t...
The Wizard of Oz Road to Emerald City Free Slot ... The Wizard of Oz Road to Emerald City is one of the many ‘Wizard of Oz’ slot games to be released by SG Interactive from the Williams Studio of the best iPad an...
Aristocrat Portal Fortunes Aztec Relics Free Slo... Portal Fortunes Aztec Relics is an Aristocrat powered online slot machine that comes with an Aztec theme. Players who love Aztec  themed games will enjoy this a...
Ancient Gong Slots by GameArt Review This 5 and 3 reels and rows game helps to bring the old vibe back to players. The Charm of Asia with a Buddha theme is used in this iPad compatible slot game qu...
Fortune Falcons Wild Respins Free Ainsworth Slot As the name suggests, Fortune Falcons Wild Respins is a slot release from Ainsworth focused on incredible the wild respins feature bonus round. Fortune Falcons...
Captains Fortune IGT Slots Free Play Review Captain Jack Sparrow has captured the hearts of many folks both old and young due to his witty, cunning and funny behaviour on set. Since the debut film of the ...
Ainsworth Rich n’ Wild Slots Free & R... Here is another fun slot from the house of Ainsworth that promises to unearth the treasures from the forests of Mexico. This Mexican rainforest themed slot take...
Tags: Asian themed slots, Betsoft free app, Betsoft free iPad pokies, Betsoft free iPad slots, Fa Fa Twins Free Slots,