The AGS powered Fire Wolf II is a sequel to the highly popular Fire Wolf slot. Just like its predecessor, this game can be described as an awesome release. If you like game like Wolf Run and Wild Wolf from IGT then this is your go-to game to play for real money or just have a free spin here on our site.

The Fire Wolf II slot comes with the PowerXStream system, the reel surge bonus, it has a RTP % of 95.89, high variance, 576 ways to win and a 3x4x4x4x3 reel format. But wait there’s more! you can also win mystery jackpots at random and up to 128 free spins.

NB: You can take a free spin on your iPad, iPhone or Android all the popular AGS slots right HERE. 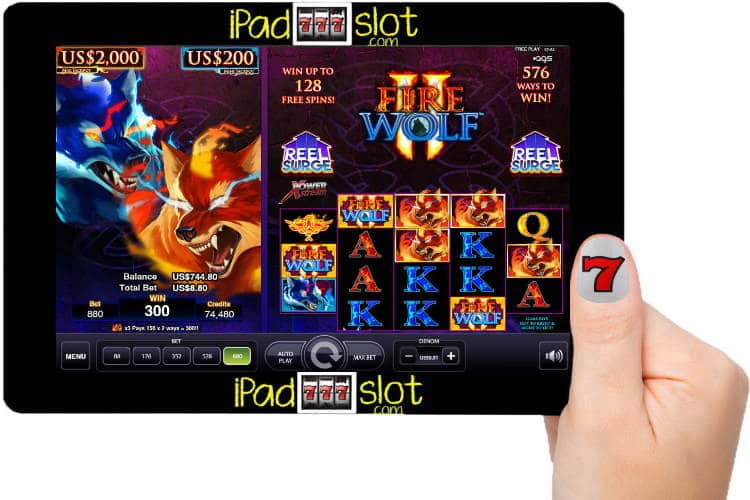 AGS has made it a habit to come up with exquisite graphics when designing its slots; Fire Wolf II is no different. The upper part of this slot depicts two massive wolves one in blue and the other in orange. The lower part of the slot is where players will find the reel section. The reel section is covered by a solid black colour. 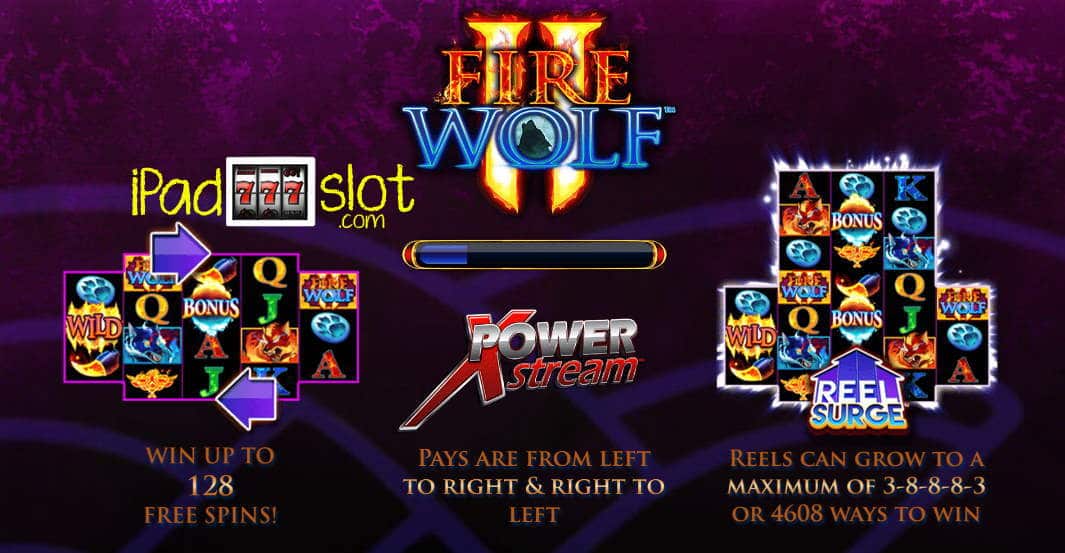 BASE GAME SYMBOLS AND PAYOUTS 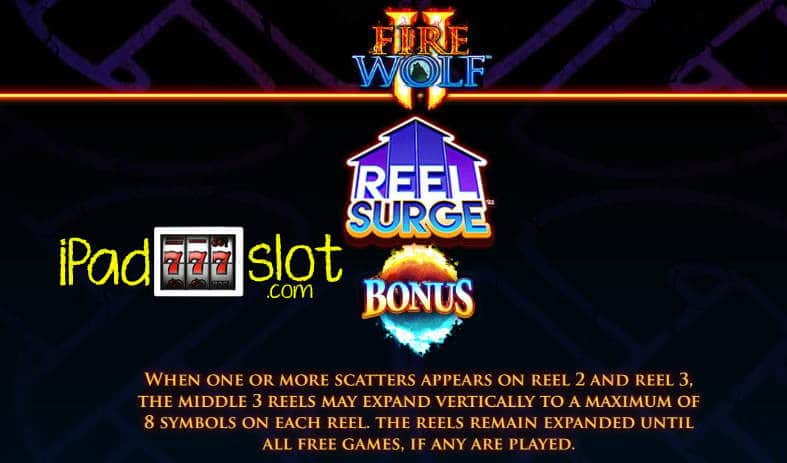 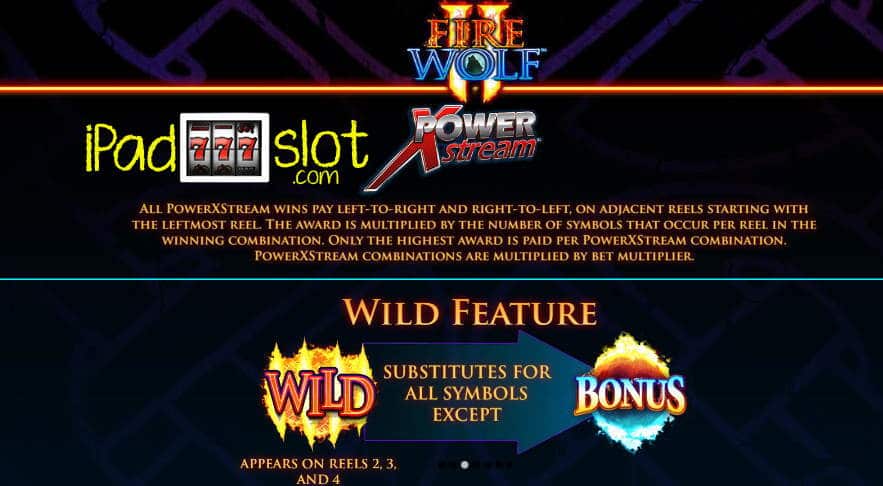 Players are looking to gain more knowledge into how these elements guard and guide the world while at the same time enjoying their favourite slots.

Fire Wolf II is a great game to play which comes with an ripper range of bonus features. In addition to the bonus features, the game is at the same time entertaining and as such, receives a high of 9.2 point rating out of 10 points in our AGS slot game reviews.

Nice Win on Fire Wolf Below

Wonders of Africa Free IGT Slots Game Guide Different continents and regions are known for different things. The European continent is known for its brilliant medieval and modern day architecture, the Sou...
Buffalo Inferno Aristocrat Free Play Slot Game Aristocrat casino software developers have a vast range of classic themed online slot machine games. Their games are easy to play and they are built with elegan...
Wings Over Olympus Free Slots Game Guide Wings Over Olympus is an ancient-themed with a military feel slot game which comes from the Aristocrat stable of awesome free mobile slot games. To start one’s ...
Goldify IGT Slots Game Review & Guide This is a Greek-themed iPad slot game from IGT that's pretty awesome overall. Goldify is based on the tale of King Midas who is widely believed to have been cur...
Helen of Troy Aristocrat Free Slots Game Guide It's time to embrace the old when you play this Aristocrat powered video slot. Set in medieval Europe where Helen of Troy was one of the most feared but wisest ...
Tigress By Aristocrat Free Game Play Guide This wonderful slot game takes the players into the heart of South East Asian jungle where you will discover the ferocious wild beast the royal creature tigress...
Buffalo Moon By Aristocrat Free Play Guide Buffalo Moon Slot is an interesting iPad slot game designed and developed by Aristocrat. It's inspired by the Native American culture where buffaloes are consid...
Enchanted Unicorn Slots Game Guide This is a fantasy themed slot from IGT which takes you into a mythical forest that is full of unicorns, mushrooms and some lovely flowers. Your adventure in thi...
Lightning Box Angel’s Touch Free Slot Guide The dream of many is to wine and dine with angels when they finally depart the earth. This dream is inspired by the ‘tales’ of how wonderful angels are so it ma...
CLUEDO Spinning Detectives Free WMS Slots Guide CLUEDO (or CLUE) Spinning Detectives is an SG Interactive - Williams powered mobile compatible slot game themed on the popular board game that most of us have p...
Dark Ninja Slots by Zeus Play Game Guide The Dark Ninja by Zeus Play is an above average iPad free or real money slot machine game which is based on the lives and surroundings of a Ninja. Right from th...
Bushido Code GameArt Slots App Bushido Code is a nice looking slot machine game by GameArt, and it is based on Samurai and Japanese philosophy of war and culture. Let's Play Bushido Code iPa...
Dolphins Pearl Novomatic Free Slots App Guide Dolphins Pearl comes from the Novomatic stable of awesome iPad compatible slot machine games. This is an aquatic-themed slot game whose primary focus is on the ...
Valkyrie Fire Barcrest Free App Review Valkyrie is a Norse mythology themed iPad and iPhone compatible slot which comes from the SG Interactive stable of Barcrest games. This slot has a special focus...
Sizzling Hot Novomatic Free Slots Game App Sizzling Hot is a Novomatic powered classic iPad and iPhone compatible slot which comes with a nice simple fruit theme. As is the case with most other classic g...
Secrets of Stonehenge Free IGT Slot App Many folklore books are full of stories and legends about mysterious creatures and societies of the past. While its great to learn about the past legends from b...
Lucky Larry’s Lobstermania 3 Free Slots Ga... Luck Larry's Lobstermania 3 is the third slot game in the series. Like the previous Lobstermania games, this awesome iPad and iPhone compatible slot is develope...
Cosmic Fortune iPad Slots Review Cosmic Fortune is the newest iPad slot to be released by NetEnt and it is surely a great game to play for real money. The game is based on an alien invasion and...
Wealthy Monkey Free Konami Slots Game App Wealthy Monkey is an orient themed slot game developed by Konami which primarily focuses on the monkey as you might have deduced from the title already. Players...
Arabian Treasures Free Aristocrat Slot Game Guid... Arabian Treasures Free Slot Guide Arabian Treasures is an online slot machine which comes from the Aristocrat company that can be played for free online and at...
Tags: AGS android slots free, AGS free iPad slots, AGS iOS free slot app, AGS iphone slot free, AGS slot app free, AGS social slots, Fire Wolf II,