In Greek mythology, the history of legendary Prometheus has still remained one of the most inspiring stories. Taking this into consideration the Flame of Olympus iPad slot game has been designed by Aristocrat. If you are aware of the original story, you should know that Prometheus is a benevolent and altruistic titan who really cares about the humanity.

For the sheer development of civilization, he will steal fire from the gods of Mount Olympus, ok enough of the history lesson – let’s get started.

Take a FREE spin here on Flame of Olympus slot by Aristocrat pokies.

The game screen will welcome you with a golden statue of Prometheus who’s now holding a burning torch. With this titan, you will enjoy an impressive game play where you can win various lucrative rewards and discover a bunch of unique symbols.

Maximum & Minimum Bet : In order to play this slot game, your minimum bet needs to be at least 2,500 coins. whereas, you can also place your maximum bet of 25,000 coins.

All lines are played at a line cost of 20 lines. Total Bet = Line Cost * Bet Per Line. Once, you have placed your total bet, now you can start the game play by using the “Spin” button.

According to the base paytable of this game, the primary game icons can be divided into two separate groups. You can easily point out the difference through their radical designs. The most common symbols are the standard card icons that include numbers 9 & 10 and then followed by Jack, King, Queen, and Ace.

The second group typically consists of some potential symbols, such as a column, a goddess, a golden cup, the fire, the golden coin, and the Prometheus symbol. 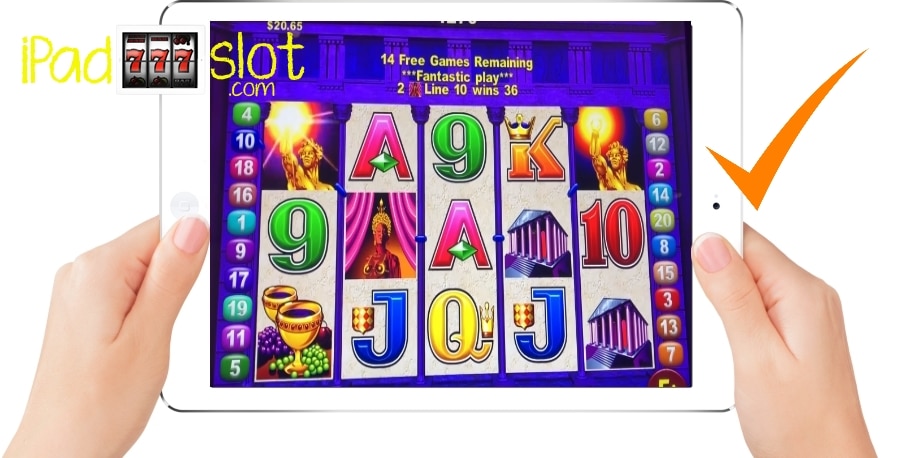 Symbols to watch out for :

Wild Symbol : Among the aforementioned game symbols, the wild icon is depicted by the Prometheus symbol. This icon can replace all the basic game icons and reward you with a great winning combination. Plus, if the Prometheus symbol replaces a win, the total pay for that win will be doubled.

Scatter Symbol : The golden coin is the scatter symbol. This icon can generate a payout regardless of any particular position.

Bonus Feature : This online slot game rewards you with a bonus feature in order to make your gaming experience even more compelling, intriguing, and exciting. During the bonus feature, the scatter symbols will play an important role. With three or more scattered coin symbols, you can win 15 free games.

*The best part is – all wins will be tripled during the free games. Additionally, features can be triggered again during this feature*

Payout Structure : This online slot game results in a lucrative payout structure where the wild icon, the Prometheus symbol is the highest paying symbol. With five such icons, you can win the grand payout of 9,000 coins. Again, five scatter symbols also offer you 400 coins.

The base payout structure is described below :

Flame of Olympus features a classic Aristocrat pokies game play where you can win exciting rewards by using the bonus symbols (the wilds and the scatters). If you are really excited to be the part of this legendary tale of Prometheus, then this free slot game will be quite apt for you to enjoy on your iPad for free or real money as select online casinos with Aristocrat iOS slots like the Heart of Vegas site or you can have a spin on real money Aristocrat iPad games.

Rainbrew Online Slot Guide Rainbrew is an online slot machine which comes from Microgaming. This 243 ways to win 5 reel game fuses a fantasy and a magic theme thereby making it the perfec...
Wings Over Olympus Free Slots Game Guide Wings Over Olympus is an ancient-themed with a military feel slot game which comes from the Aristocrat stable of awesome free mobile slot games. To start one’s ...
Smash the Pig Free IGT Slot Guide Smash the Pig is an online slot from IGT which more or less follows the same script as that espoused in the title. This is to say that when playing Smash the Pi...
Miss White Free Slots Game Review IGT in this game rekindles the tale of Snow White, one of the most popular legends to have ever been told. Miss White slot game emulates the earliest Snow White...
Mega Hearts Free Slots App by Ainsworth Mega Hearts is a romance-themed iOS compatible slot app from the Ainsworth stable of amazing games. This pokie comes with two incredible progressive jackpots wh...
Jackpot Reef Hunters Free Slots Guide Jackpot Reef Hunters is an online slot machine from Aristocrat comes with an aquatic theme. Instead of fishing for dinner, players in this slot game will be fis...
Mr. Cashman Jewel of the Enchantress Free Aristo... Mr. Cashman Jewel of the Enchantress is a ripper (great) pokies game app released by the well-known Aussie based slots manufacturer Aristocrat. What’s appealing...
Cleopatra Plus Slots Game Guide Cleopatra Plus is an iPad compatible slot game by IGT Gaming whose theme is based on the Egyptian Queen and the time of her rule. The game comes up with as much...
Himalayas Roof of the World Free Slot Game Himalayas Roof of the World is a graphically stunning Barcrest game from SG Interactive based on the world’s biggest mountain ranges i.e. the Himalayas, which i...
Joe Blow Gold Free Aristocrat Pokies Game Guide Joe Blow Gold is an Aristocrat powered online pokies machine machine. This slot comes with a mining theme so if you like Where's the Gold then this is your game...
Indian Dreaming Emerald Edition Aristocrat Free ... Aristocrat developers have made a name for themselves for releasing some of the most popular slot titles both for land-based and online casinos. The original In...
Sun Chief Slots Free & Real Money Ainsworth... Ainsworth never lets down its customers and proved once again with the Sun Chief iPad slot game available at the Players Paradise casino. You can have adventure...
Disco Spins iPad Slot Game Free Play & Revi... Put on your bright clothes and take a trip back in time too enjoy the 80's era with Disco Spins, an iPad slot created by Net Entertainment. This game is fully t...
Girls With Guns Frozen Dawn iPad Slot Free &... Developed by Microgaming the Girls with Guns – Frozen Dawn slot for iPad game is based on a heroine theme, nothing but chicks with big weapons. In this game, pl...
Dragon Spirit Online Slot Review This dice-themed slot from EGT takes you right into ancient China with its graphics and soothing background music. By merging dice-throwing and Chinese wildlife...
Club8Casino Guide & Review Social casino gaming for Aussie players is really hot in the land down thanks to the Club8Casino. Several well-known & highly popular southern Queensland ba...
Play Double Diamond Slots Free Guide Double Diamond from IGT is one of the popular takes on the classic 777 style of slots. This game gets 3 reels and 1 line for the players to get across many rewa...
NETENT Narcos Free Slots Game Guide Netflix lovers will easily recognize the name ‘Narcos’. This is because Narcos is a highly popular series that runs on the Netflix streaming platform and lovers...
Island Princess Quad Shot Free Ainsworth iOS Slo... Island Princess is an awesome Aztec themed slot game developed by Ainsworth. When playing Island Princes Quad Shot, players are taken back in time, in the Aztec...
Cash Spin Free Bally Slots App Game Guide Cash Spin Slots made by Bally is one of the most simple slot games out there, so make sure you grab the free Bally iOS or Android slot app and get playing. Ther...
Tags: Aristocrat free iPad pokies, Aristocrat free iPad slots, Aristocrat Free Slot App Article Tags, Flame of Olympus free iPad pokies, Flame of Olympus free iPad slots,