Way back in 2015 the very first Megaways slot machine called Dragon Born was released to online casino punters, this game was not a huge success but in 2016 the Bonanza slot was released and this was a game that players loved to play.

The Aussie company Big Time Gaming were the creator of this popular game and the rest is history as they say. The popularity for Megaways pokies has been off the scale over the past few years and this trend is not showing signs of slowing down any time soon, at last count there was more than 160 games available online.

The Megaways game “mechanic” has morphed into a licensed franchise and the assortment of slots from different game makers like Microgaming, NETENT, Red Tiger, Bally, Pragmatic Play, WMS, Blueprint Gaming, iSoftBet, Skywind is ever increasing using the Megaways ways to win system.

Megaways gives players a very unique way of enjoying slots. At the very base of the game engine is the shape-shifting reels that lets the game reels vary to create a random number of symbols for every spin.

Think of Megaways as a super duper version of the 243 ways to win format that is commonly found on 5-reel reel games. As you know 243 ways games come set with 5 reels and 3 rows but in Megaways they have normally 6 reels and dynamic changing rows and sometimes even a horizontal 4-symbol reel directly above the reel area to add to the excitement.

Every game spin will give you a random number of symbols on each reel, Thus, for each and every spin you have a different number of winning ways which is normally up to 117,649 but some games like Wheel of Fortune Megaways offer up to 1,000,000 active paylines in play.

The potential to produce huge wins in just one spin makes these games very popular indeed among punters. 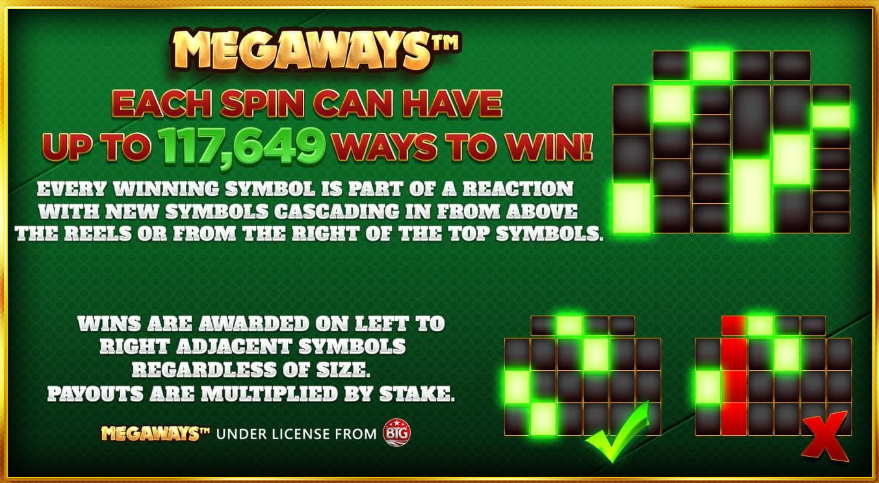 Megaways slots are all medium to high variance so they are a win big or go broke style of game. You will not get many small wins but when you do get a pay it’s going to big pretty good. Plus, it gets even better, the awesome bonus features such as the free spins with unlimited win multipliers, the cascading reels and the game reel modifiers like mystery symbols can make for more excitement than the heart can take in just one spin. Back a few years the popular slots at online casinos were the ones from Microgaming, NETENT, IGT, Bally, WMS and the likes of – these days the go-to games are the now the ones with the Megaways system.

Our 80 plus demo Megaways slots can be played right from our site on all devices, you will not have to do any sign-ups or ridiculous age verification checks  to play them. The games should load and play from most countries so enjoy. If you want to play these games for real money just view our recommended Megaways online casinos.