Tiki Torch by Aristocrat is one of the older casino slots around. It has been around since 2001 at land casinos and it was very popular in Aussie and Kiwi pokies gaming venues.

The game is not remarkable for the reason that whether you win $5.00 or win $30 or more, the music remains the same. So don’t expect any bells and whistles.

The game is a 5 reel, 20 payline slot which features a Polynesian South Pacific theme.

Since Tiki Torch follows the tradition of old-school slots, the game will not attract a lot of modern slot players who expect more from a game, but Tiki Torch can be a pleasant online slot diversion if that’s your thing. 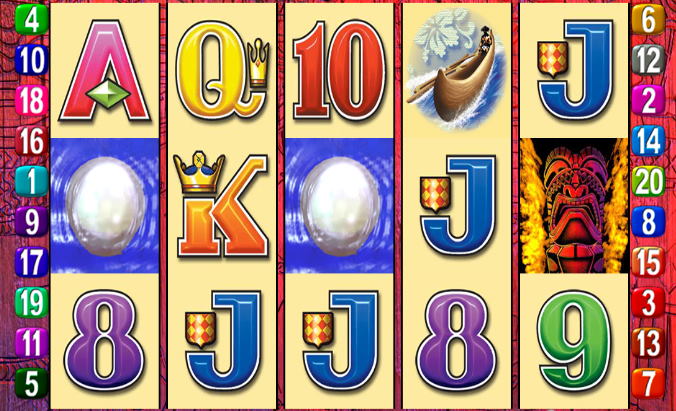 The object of the game is to collect as many like symbols as possible.

The Tiki Torch itself serves as wilds, and if you collect 5, then you can collect 2500 coins which is the maximum payout. 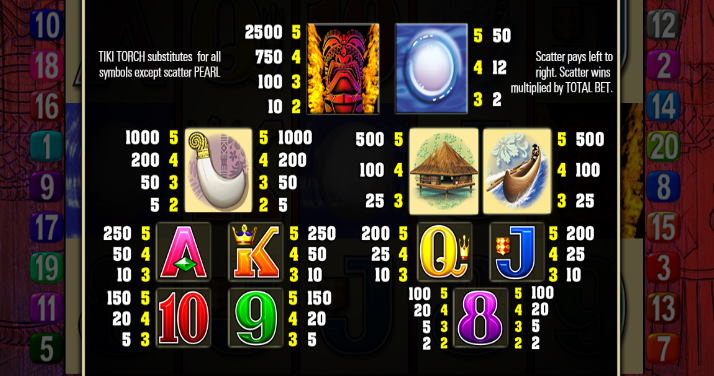 Other symbols and their payouts include:

Tiki Torch has a return to player percentage of 94.85 percent, but note that it is a
high to the medium variable game, which means of the total return to player, only a few lucky players will reap a lot of coins, and the average player will likely sustain losses.

So play Tiki Torch with caution if you have a small bankroll, as the losses can add up quickly if you don’t trigger enough scatter symbols to pay out significantly.

Also, notice that if you win say $5, and elect to gamble, you can gamble up to 4 times your winnings, but that also means you have a 75 percent chance of losing your winnings, so the gamble feature is just that, a real gamble so best to avoid this feature.