From Dawn Till Dusk is a branded slot game developed by Novomatic. This slot is a game adaptation of the movie which goes by the same name i.e. From Dawn Till Dusk that was released way back in 1996 starring Quentin Tarantino and George Clooney. This game fuses both the action and the horror theme of the cult movie into one awesome casino slot machine package.
** The Novomatic From Dawn Till Dusk app and / or similar slot games may be available to play on your iPad, iPhone, Android, Windows device, PC or Mac. Just take a peek at our FREE GAMES PAGE HERE. **

From Dawn Till Dusk Slots Guide 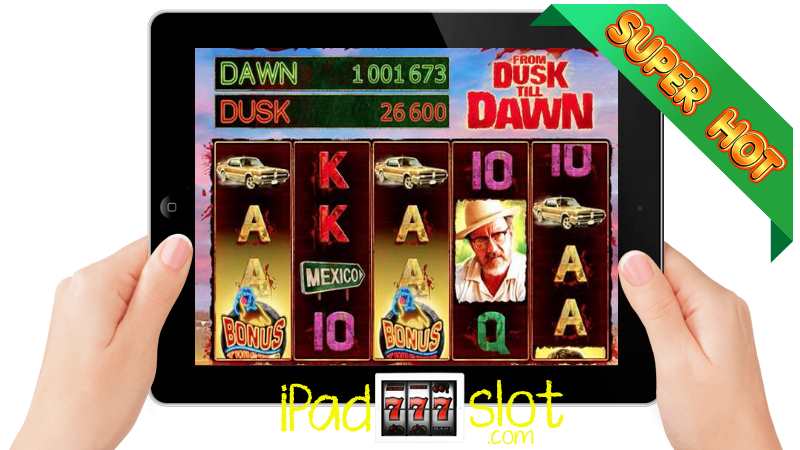 This slot is set against a backdrop of a racing course acting as the background. The reel section is covered by a (blood) red colour so it looks really awesome visually. 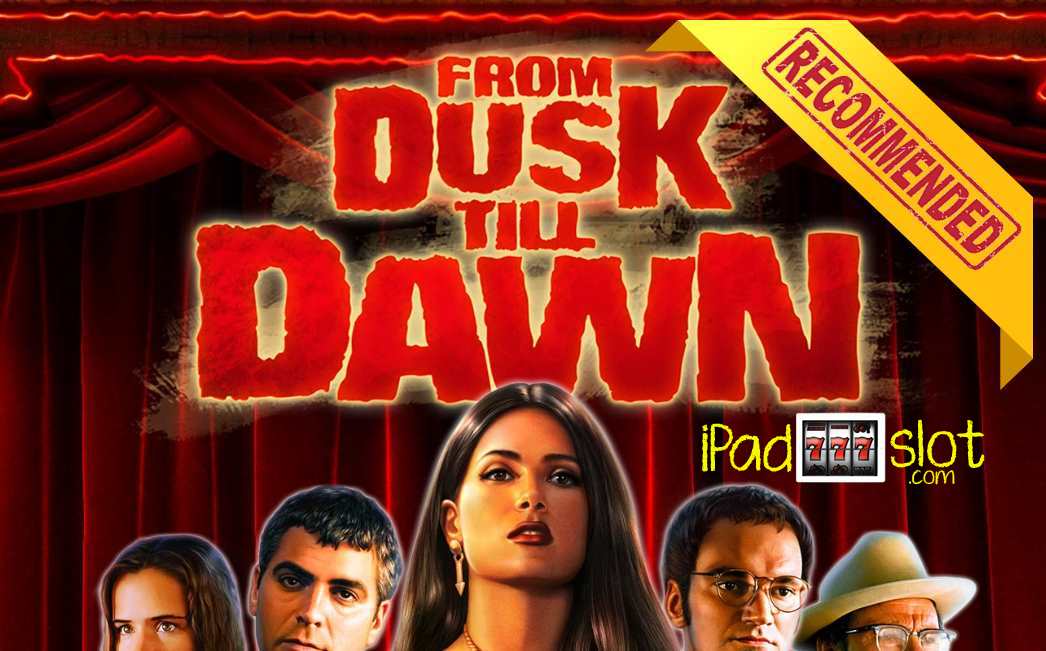 When spinning the reels of, From Dawn Till Dusk, players will find the following symbols on the reels: the WILD icon, the Bonus Twister icon, male character with a neck tattoo, Male character putting on a suit, male character wearing a hat, female character, an old car, a Mexico signpost, and traditional poker symbols.

From Dawn Till Dusk is an entertaining iPad slot game to play which comes with numerous bonus rounds that will be very kind to you in the pay-outs. The RTP of this slot app stands at about 95.6  percent. Out of a 10 point rating, this slot gets an 8.5 point rating in our Novomatic iPad slot game app guides.

About the Dawn to Dusk Movie

In this cult action and horror flick from movie legend director Robert Rodriguez and writer Quentin Tarantino you are in store for some cracker excitement from start to finish. Tarantino stars with the Hollywood superstar George Clooney as a couple of bad-boy style brothers called Seth and Richie Gecko.

After a whole bunch of bank robberies that left a sea of blood in the Geckos trails, the sadistic borthers head to Mexico to live the high life and chill a bit. To be able cross the Mexican border safely they kidnap Jacob Fuller a widowed preacher man played by Harvey Keitel and his two kids Kate and Scott.

Once they make it south of the USA they park their RV at a redneck type trucker bar aptly named “The Titty Twister” where Seth and Richie were meant to meet up with a local criminal of sorts. After a few drinks, they realize that this is not your regular local bar scene. The bar begins fill with blood-thirsty vampires as it’s their local watering hole. With the odds against them surviving are not good so the Fullers and Geckos team-up to defeat the vampires. So that’s a spoiler we know, at 1 hour and 48 minutes this is cracker movie to watch if you have not seen it before.

Black Panther Aristocrat Free Play Pokies Game Black Panthers are considered to be animals in the Panthera species most commonly the leopards and jaguars. Inspired by this rare species, the developers at Ari...
Zodiac Princess Free Aristocrat Slots Game It’s the aim of every one of us to be wealthy during our lifetime. No one really wants to spend an entire lifetime in poverty and as such, many people employ di...
Pacific Paradise IGT Free Mobile Slot Review The underwater world is a world of aquamarine life and just like the way of life at the bottom of the ocean, IGT has recreated an video slots game that features...
Best Slot Machine Game Software for Your iPad or... Leading software developers create games which can be played on multiple casino platforms. New advances in web software, such as HTML technology has enabled cas...
Get Clucky Free IGT Slot Review & Game Guid... Play your way through an eggciting IGT gaming experience which has been designed on 5 reels and 20 paylines which sports a number of fantastic features includin...
Microgaming Highlander Free Slot Guide Highlander is a branded slot game which comes from Microgaming. Based on the widely popular Christopher Lambert movie set in the Scottish Highlands, players loo...
Zombie Hoard Free Microgaming Slot Game Guide Zombie Hoard is an online slot which comes from the Microgaming company. As one can deduce from the title, this pokies machine comes with a horror theme chocked...
Legend of Shangri La Online Slot Guide The Legend of Shangri La is a NetEnt slot game, which has a unique cluster pays ways to win along with 6 reels. With the main game theme based on monks and Budd...
Red Hot Tamales IGT Slot Free Play Guide Red Hot Tamales is an online slot machine from IGT which comes with a food theme. For those who might not know, Tamales is a Mesoamerican dish made of dough in ...
Aristocrat High Stakes With Lightning Link Free ... Which iPad slot is your favourite casino game? For many people, this is a difficult question to answer as they do not have a single game that they can classify ...
Sushi Yum Yum Free IGT Slot Game Guide Sushi Yum Yum is an online slot machine which comes from the IGT company. As one can deduce from the title, this game is food-themed and it pays homage to sushi...
Aristocrat The Walking Dead 2 Free Play Pokies G... The Walking Dead 2 is a branded slot game from Aristocrat. It's a branded game based on the hit AMC TV show and players enjoying this pokie can expect to meet a...
China Shores Free Play Slot by Konami If you are looking for an oriental-themed free iPad slot game, then Konami's China Shores will be an excellent choice for you. This pokies game, its five reel g...
Aristocrat Crusaders Heart Free Play Guide The name of Crusaders are pretty well-known in the history. They are the perfect example of pure bravery as these fearless knights left their families, friends,...
Polar High Roller Free VGT / Aristocrat Slot Polar High Roller is an online slot machine produced by the VGT company which is a part of Aristocrat. The slot comes with a classic design as it has only three...
Imperial Wealth Slots App by Konami Guide Imperial Wealth is an oriental themed slot game from Konami which celebrates Chinese traditions, power and strength. For players to start playing Imperial Wealt...
In the Shells IGT Slots Game Guide This is another nautical themed slot game from IGT developed in the same genre as other water and ocean themed slots from the same developer. Quick Start Guide...
Gold Stacks 88 Lunar Festival Free Pokies Game G... The Lunar Festival is a time when people in the Orient take time to celebrate their fallen ancestors and heavenly deities. During the festivities, folks will vi...
Jeopardy IGT Free Slots Game Review The Jeopardy iPad slot game is a branded game from IGT. The game is based on the popular NBC and ABC quiz show by the same name, that is, Jeopardy. The show sta...
Crown Of Egypt Free IGT Slots Guide Crown of Egypt from IGT is an Egypt-themed game slot that has people falling in love with it due to the classic symbols and features that are IGT awesome. The f...
Tags: From Dawn Till Dusk free slot app, Novomatic android slots free, Novomatic free iPad slots, Novomatic free pokies, Novomatic free slot apps, Novomatic iOS free slot app, Novomatic ipad pokies free, Novomatic iphone pokies free, Novomatic iphone slot free, Novomatic pokies app free, Novomatic slot app free, Novomatic social pokies, Novomatic social slots. Novomatic android pokies free,