Developed by Microgaming the Girls with Guns – Frozen Dawn slot for iPad game is based on a heroine theme, nothing but chicks with big weapons. In this game, players are given the chance to enter the world of 6 heroines and help them fight Saskia, the villain.

This online slot is the sequel to its previous version known as the Girls with Guns – Jungle Heat. The slots became very popular which means this version will definitely appeal to fans as well as those who enjoy fighting the bad guys on a gaming machine. Play it free click the banner below.

The game has a snowy background and all the six characters including the leader look amazing in their cold weather gear. Girls with Guns – Frozen Dawn has an edgy soundtrack which adds to the thrill of the game.

The animations and graphics are also amazing. The six heroines are the main symbols of the game and they include Katherine, Maria, Jess, Zoe, Kira and Alex. Then there is the villain, Siskia. Other lower value symbols include the usual 10, J, Q, K and Ace from the standard deck of cards. 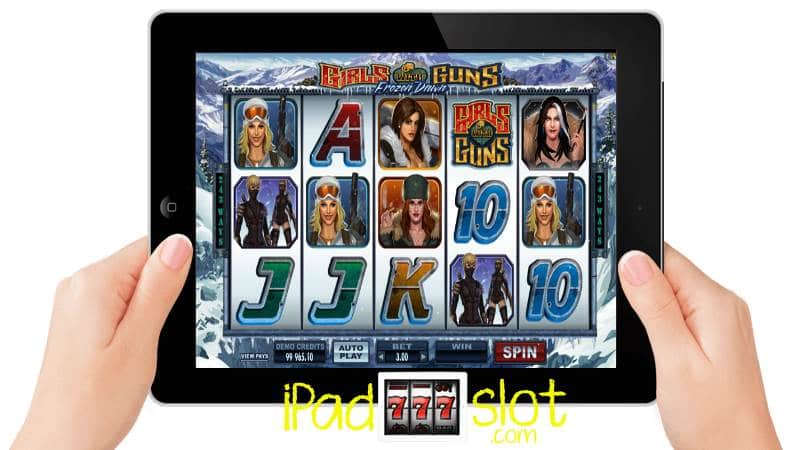 Girls with Guns – Frozen Dawn is a 5 reels game with 243 ways to win similar to Aristocrats Reel Power system. This means that the game does not have a defined payline structure. There is a range of coin denominations which players can choose from when starting the game.

Does this game iPad slot rock or not?

Since the Girls with Guns – Frozen Dawn is an action packed online iPad slots game; it will appeal to most players. It is more exciting than its previous version because of the huge range of exciting bonuses, thrilling jackpot and other features. Whether or not you are a fan of the Girl with Guns slots, you will not be disappointed.

Showdown Saloon Free Microgaming Slot Game Guide Showdown Saloon is a game from Microgaming which comes with a rather awesome theme. As such, when spinning the five reels of this slot, the player will be see r...
Wings Over Olympus Free Slots Game Guide Wings Over Olympus is an ancient-themed with a military feel slot game which comes from the Aristocrat stable of awesome free mobile slot games. To start one’s ...
Cleopatra IGT Slots Free Play & Review The Cleopatra slot is a brilliant game from IGT and since its release over 25 years ago the game has drawn millions of attention a played in over thousands of c...
Aristocrat Red Baron Free Slots Guide Do you know "Red Baron" - the famous German fighter pilot? This legendary & fearsome character ruled the skies from his cockpit in a red bi-plane during Wor...
Jackaroo Jack Lightning Box Free iOS and Android... Jackaroo Jack is an online slot machine which comes from the Lightning Box stable. This iPad, Android & iPhone compatible slot comes with an adventure theme...
Cayetano Gaming Asian Riches Slots Game Guide Asian Riches by Cayetano Gaming is a classic example of how modern slot machine games has risen up the popularity charts with iOS players. The game, based on As...
The BullFighter Free Slots Game Guide Spain is one of the most popular country's where bullfighting is legal. However, most other countries across the globe have either explicitly or implicitly bann...
Wicked Tales Dark Red Free Slot Game Guide Wicked Tales Drak Red is an online slot machine which comes from the Microgaming company. This online slot machine comes with a fantasy theme and as such, playe...
Amazons Diamonds Novomatic Free Slot Game Guide Amazons Diamonds is an above average Novomatic powered slot game which comes with a western theme and a good balance of bonus and free spins features. AMAZONS ...
Champion of the Track iPad Slots Review Champion of the Track is a stunning iPad game from Net Entertainment. The game offers 30 paylines and can be played for great bet amounts that range from bets o...
Thai Sunrise by NextGen Gaming Slots Guide Thai Sunrise by NextGen Gaming is a virtual journey to Thailand and allows the players to witness some of the most regular scenes to be found in a Thai city lik...
Pompeii Slots app for iPad Casino Players The best way to play and win on Pompeii iPad slot game has been asked many times before, their is no sure way but our guide may help you in the quest to win big...
Golden Wolves Konami Slots Guide Golden Wolves is an animal themed iPad slot game powered by Konami. This game takes the player inside an arctic forest where there are lots of wolves, eagles, a...
Astro Cat Lightning Box Pokies Free Play Guide Astro Cat is an online slot machine which comes with an animal theme and it's just the pokies game to play for free or real on your iPad, iPhone or Android. Thi...
Mild Rockers Lightning Box Free Slot Game Guide Mild Rockers is an iPad compatible slot which comes from the Lightning Box stable. This game comes with a clubbing theme meaning that as players spin the reels,...
Gold & Dragon Free Slots Game Guide Gold & Dragon is an oriental themed slot game from IGT. The game is one of the newly released progressive games from the IGT stable which comes with four pr...
Rainbow Riches Fortune Favours Free App Bravery is the sole virtue that you need to start your adventure in Rainbow Riches Fortune Favours. Just as the saying goes, fortune favours the brave, to enric...
Get Clucky Free IGT Slot Review & Game Guid... Play your way through an eggciting IGT gaming experience which has been designed on 5 reels and 20 paylines which sports a number of fantastic features includin...
Family Guy Free IGT Slot Game App Guide Family Guy easily ranks as one of the most popular animated comedy sitcoms that have ever been produced since the year of 1999. Created by Seth MacFarlane the F...
The Huntress Aristocrat Slot Free Play Guide The Huntress is an free online slot machine which comes from the Aristocrat studio. Just as can be deduced from the title, this online slot machine does come wi...
Tags: girls with guns frozen dawn,