Glitter Gems exciting iPad compatible slot machine game by Ainsworth gaming, it’s a spectacular example of how to engage players in a eye candy theme which Ainsworth has tried out to be successful thus far by all accounts. The game theme is all about diamonds and gems as you would expect and it possesses an excellent RTP of some 96.25% or more at many online casinos.

Glitter Gems is a 30 paylines game, which appears in 5 reels pay slot. The symbols in the game are mostly gems, since the theme is about all things of high rock value like diamonds and rare gems. 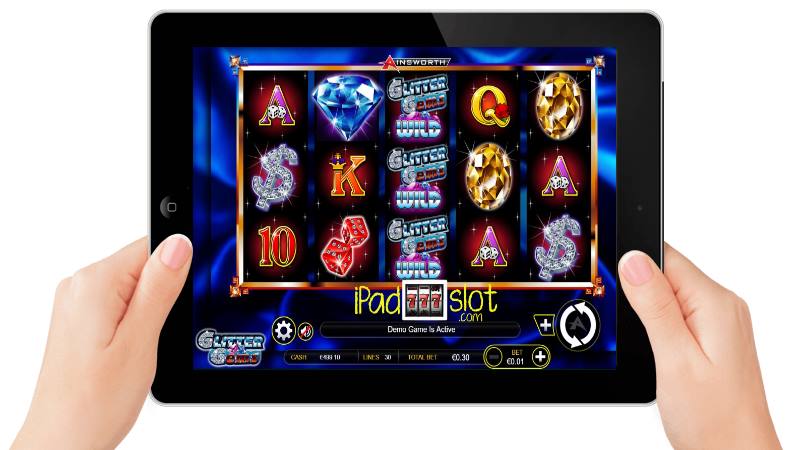 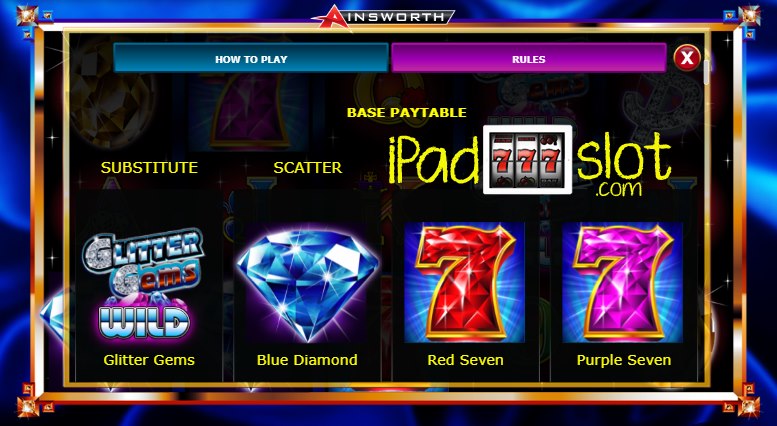 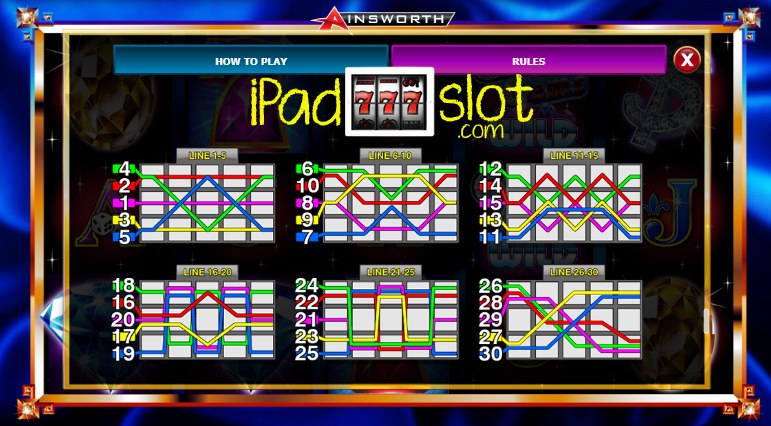 Scatters are responsible for the round and 8 free games are activated when 3 or more scatters are landed. During the feature, at most 5 additional free spins can be won in terms of cascading free spins. 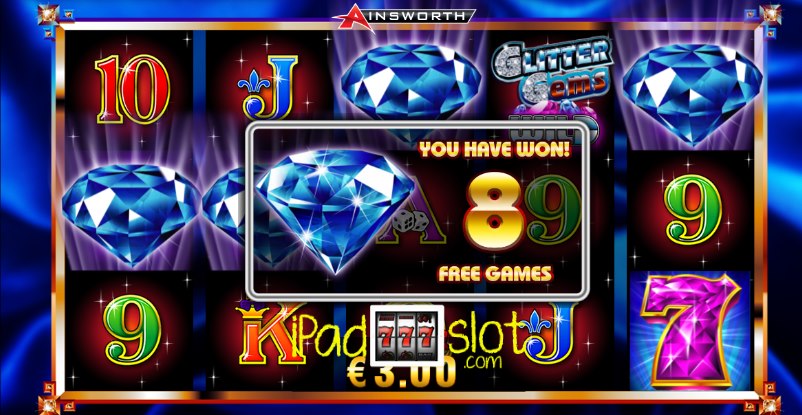 Glitter Gems is a diamond and gems themed iPad slot game, which allows a visually nice appearance to the players who try this game. With an attractive jackpot and bonus round, there is no reason to not have a go on this game either for free or real money punting. It’s not as good as IGT’s Davinci Diamonds but it’s still a solid game overall.

Surftastic Free Aristocrat Pokies Game If you are you a fan of the water or surfing then you are going to love the Surftastic slot game from Australia’s best pokies provider aka Aristocrat Gaming. Th...
Jesters Fortune Slots Free Play Guide Jesters Fortune is a carnival-themed iPad slots game from Aristocrat that comes with five reels with 25 paylines. Entering the Jesters Fortune carnival can be f...
Roaming Reels Pokies by Ainsworth Free Play ... The Roaming Reels pokies machine is developed by Ainsworth. The game play is based on roaming African plains which is a bit like 50 Lions slots of course in man...
50 Dolphins Free Ainsworth Slot App Guide The  50 Dolphins Slot game is another intriguing Marine-themed Ainsworth social slot that can be played at the Players Paradise Casino on your iPad for free (su...
Candy Bars IGT Slots Free Game Guide As one can deduce from the slot’s title, this IGT powered game is all about candy. The game’s background, the symbols on the reels and even the background sound...
Sumatran Storm Slots Game Guide This is one of many IGT’s animal-themed slots. Sumatra is an island found near Indonesia where one can find a lot of tigers and other wild animals. The objectiv...
Coyote Queen the Prowl Free Slots Game Review Coyote Queen The Prowl iPad slot game is a native American themed slot game from Aristocrat Gaming. This game from Aristocrat is one of the most popular titles ...
Barkin’ Mad Free Barcrest Slot Game Guide Barkin’ Mad is an animal themed slot game from Barcrest / SG Interactive with a special focus on mans best friend. In this game, the player will find himself in...
Sushi Cuties by Booming Games App Review Sushi Cuties by Booming Games is a fun iPad slot machine game, which offers a great payout spread over beautiful and appealing characters. The game contains 30 ...
GameArt Guardian Lion Slots Review With rows of 3, reels of 5 and pay lines of 10 in total, this game is worth playing for all iPad slot casino lovers. The pay lines are fixed, and it cannot be c...
CLUEDO Spinning Detectives Free WMS Slots Guide CLUEDO (or CLUE) Spinning Detectives is an SG Interactive - Williams powered mobile compatible slot game themed on the popular board game that most of us have p...
Mythical Treasure Fortune Gods Jackpot Slot Guid... Pocket Games Soft in recent times has embarked on a drive to launch jackpot versions of its most popular online slot machines. One of such games is Mythical Tre...
Treasures of Troy IGT Slots Game Guide This is one of the many IGT branded slot games which educates while at the same time providing you with the best in terms of gaming entertainment. This slot is ...
Solar Disc Free IGT Slots Game Solar Disc is a game from IGT which comes with an Aztec theme. This slot was first created for land-based casinos but after having seen how popular it was in la...
Cash Spin Free Bally Slots App Game Guide Cash Spin Slots made by Bally is one of the most simple slot games out there, so make sure you grab the free Bally iOS or Android slot app and get playing. Ther...
Double Bonus Free IGT Slots Review One symbol that features usually in all the best classic slot machines is the Joker image. Realizing how popular the Joker is with players, IGT managed to creat...
Jimi Hendrix Free NETENT Slots Game App Guide In the past, software developers used to release basic music themed games. However, over time, they began to feel the dissatisfaction from players hence they de...
Aristocrat Buffalo Free Play Pokies Guide Buffalo is one of the most popular free iPad slots that Aristocrat Gaming has ever developed. Even though it has been around for quite some time in land casinos...
Magic Rewards Ainsworth Free Slots App Guide Magic Rewards is a magic-themed slot game developed by Ainsworth as you already worked out. When players load this game, they assume the role of Dynamo, a power...
Mega Hearts Free Slots App by Ainsworth Mega Hearts is a romance-themed iOS compatible slot app from the Ainsworth stable of amazing games. This pokie comes with two incredible progressive jackpots wh...
Tags: Ainsworth Free App, Ainsworth free iPad pokies, Ainsworth free iPad slot, Glitter Gems free slots,