The eagle is one of the most sacred animals in the world and most religions and cultures regard an eagle highly. In Asia, the eagle symbolizes courage, strength and immortality. In ancient Rome, the eagle was seen as a messenger of the highest gods, this belief is still prevalent in some countries across Europe and in Africa.

IGT in an effort to acknowledge the importance of the eagle in most cultures developed this slot game which features some sharp-eyed eagles on the reels. Get to know the different types of eagles as you spin this slot’s five reels that come with 56 paylines. 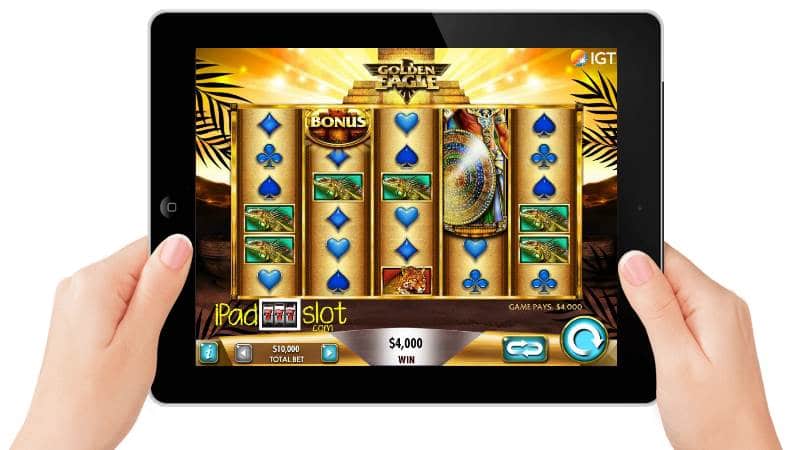 Golden Eagle is set against a backdrop of the middle of a desert with some palm leaves gently waving on either side of the reels. 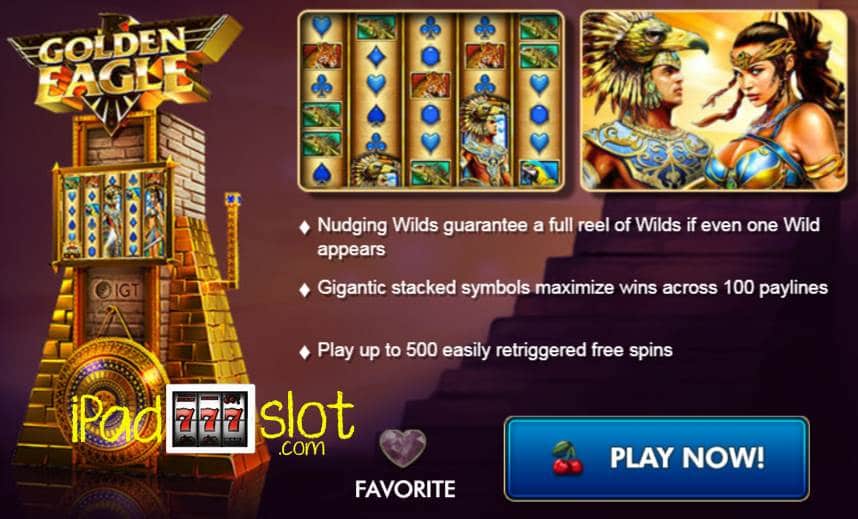 The symbols on the reels include a male warrior, a female warrior, an eagle, lizard, and a leopard. There are also card suits namely Spades, Clubs, Hearts and Diamonds. 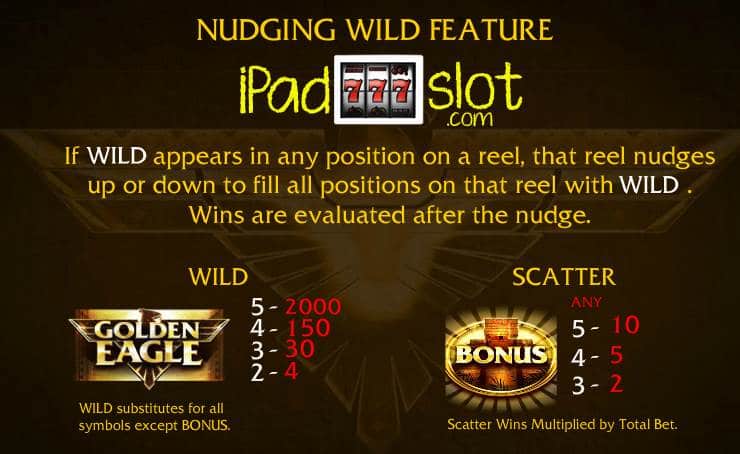 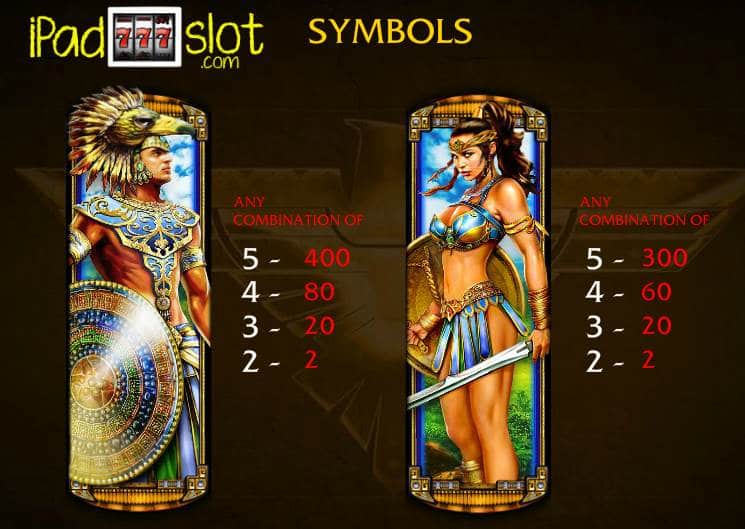 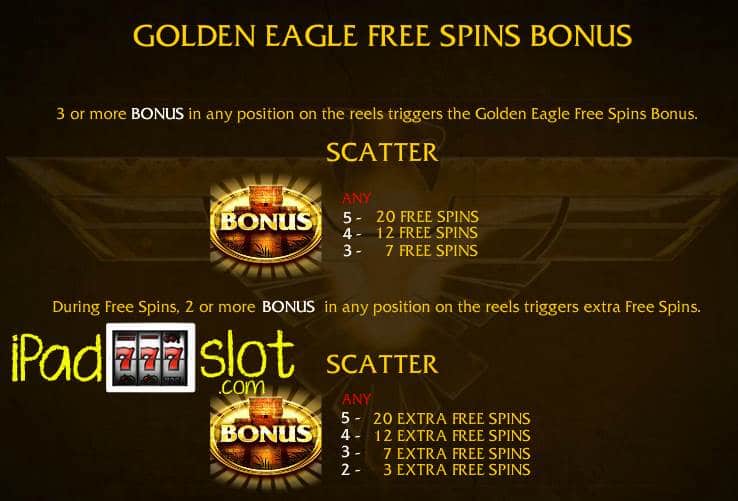 Golden Eagle is a iPad slot game with a nice unique difference from IGT. This slot gets an 7.6 point rating out of 10 points in our review.

Aristocrat Buffalo Free Play Pokies Guide Buffalo is one of the most popular free iPad slots that Aristocrat Gaming has ever developed. Even though it has been around for quite some time in land casinos...
Rainbow Riches Reels of Gold Free Slot Guide The title of this slot game is enough on its own to lure players. Odds are, no one would want to miss a chance of spinning reels crafted out of gold! The beauty...
Phoenix Princess GameArt Free Slots Review The Asian themed Phoenix Princess is an engaging iPad slot from GameArt. The 5 reels and 20 pay lines game has a layout that helps in playing the bonus feature ...
Lightning Storm Dolphin Treasure Free Pokies (Sl... Lightning Storm Dolphin Treasure is an Aristocrat online slot game that comes with an aquatic theme. When spinning the five reels of this online slot machine, p...
5 Dragons Deluxe Slots Free Play Guide If you really love Asian themed slot games, then "5 Dragons Deluxe" will be an appropriate game for you. This free or real money iPad slot game is totally inspi...
Triple Diamond By IGT Free Play Guide For those who love playing iPad slot machine games, we are pretty sure that you may have tried almost everything, from the more complex slots with 40+ play line...
IGT Baywatch 3D Free Slots Game Guide Baywatch 3D is a branded iPad slot game that comes from IGT. This game brings to life the popular TV series, Baywatch which saw lifeguards on the Malibu Beach w...
Bruce Lee Online Slots Game Preview Fancy a little Kung Fu with your online slots fun? Bruce Lee is one of the best themed slots that can be enjoyed at online casinos that use iSoftBet software. T...
Agent Jane Blonde Returns Free Microgaming Slot Agent Jane Blonde Returns is a branded online slot machine released in early 2019 it comes from the Microgaming company. This is the sequel to the original and ...
Aristocrat Panda Magic Free Slots Game Panda Magic is an online slot machine from Aristocrat which comes with an animal theme. As can be deduced from the slot’s title, the animal theme in Panda Magic...
Action Jack Free IGT Slot Game Guide Action Jack is an adventure-themed slot game which comes from the IGT stable. In this online slot machine, players will join Jack on his voyage of discovery to ...
Magic Pearl Lightning Link Aristocrat Free Pokie... Aquatic themed games are popular with players and great pokies like the Turtle Treasure, Dolphin Treasure and Lobstermania are the great ones that come to mind ...
Black Panther Aristocrat Free Play Pokies Game Black Panthers are considered to be animals in the Panthera species most commonly the leopards and jaguars. Inspired by this rare species, the developers at Ari...
Aristocrat Moon Drifter Free Play Pokies Guide This iPad compatible slot game is loosely based around Clint Eastwood. It features an innovative game play, extended reels, a special bonus round, and much more...
5 Dragons Rapid Free Slots Game Review From bedtime stories that our parents or guardians used to tell us when we were young, stories with mythical creatures commonly known as dragons used to pop up ...
Lucky 88 Aristocrat Free Slots App Lucky 88 is an online slot game designed by Aristocrat Gaming. This game is based on a Chinese belief that 8 is lucky number. It is designed with attractive sym...
Golden Peach by Aristocrat Free Slots Guide If you are an avid fan of Aristocrat free iPad slot games, you would have taken virtual trips to various destinations on the game reels already at Heart of Vega...
Mr. Cashman Jewel of the Enchantress Free Aristo... Mr. Cashman Jewel of the Enchantress is a ripper (great) pokies game app released by the well-known Aussie based slots manufacturer Aristocrat. What’s appealing...
Thunderstruck iPad slots review Based on the god of Thunder, Thunderstruck slots is a very popular online game for iPad punters. Since its release in 2004, it has attracted a large number of p...
Titanic Slots by Bally Free Play App Guide There are very few (if any) movies that are as universal like the Titanic flick that was produced by James Cameron. Titanic is a 1997 movie which is a fictional...
Tags: Golden Eagle Free Slots, IGT free app, IGT free iPad pokies, IGT free iPad slots,