The crazy jumping black cat is back in the Hexbreaker 2 online slot that’s compatible with iPad, Android and iPhone. This slot game from IGT is about black magic, spells and curses as it employs a sort of a Halloween theme. The game’s graphics are dark, perhaps to symbolize the fact that when it comes to black magic, spells and curses, they can only be done in the dark away from the prying eyes of the public.

Start your adventure in the dark by spinning Hexbreaker 2’s 5 reels that come with a massive 720 ways to win. Not just that but this game also features the Multiway Bet which means you can win from any combination whether originating from the left to the right or from the right to the left. If you liked the original IGT Hexbreaker that’s been around for about 20 years then you gonna enjoy this sequel totally – we promise. You may also have played the Hexbreaker 3 slot, it’s also well worth a free or real spin at IGT powered casinos. 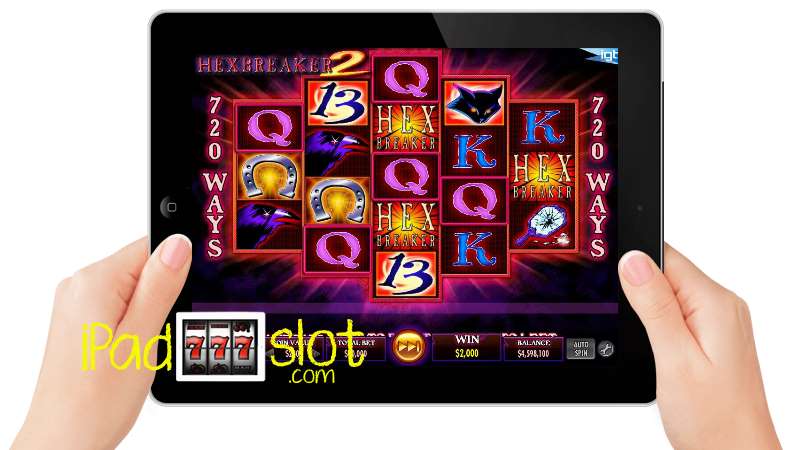 The background of this slot is dark signifying the dark encounters that dominate this slot game. 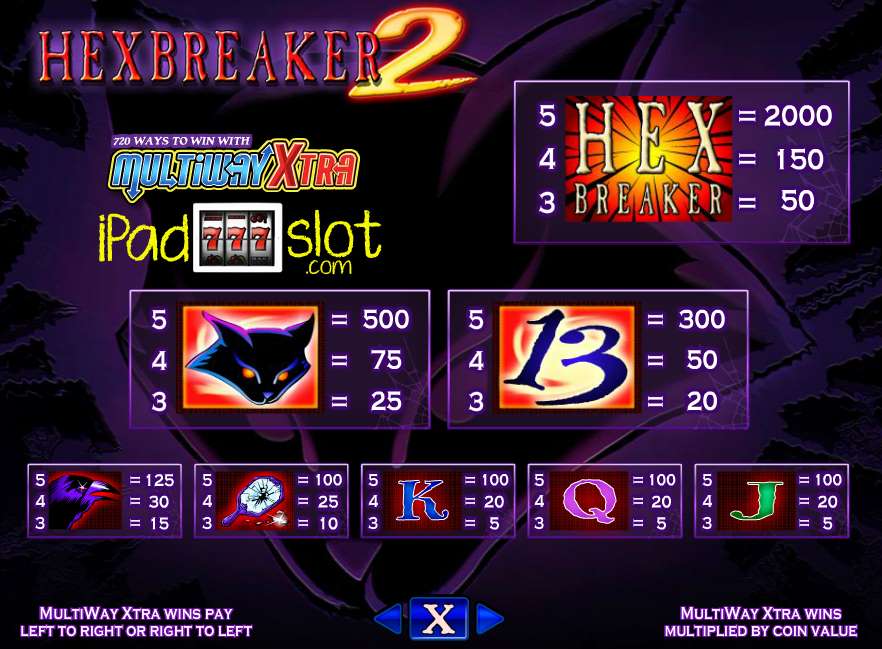 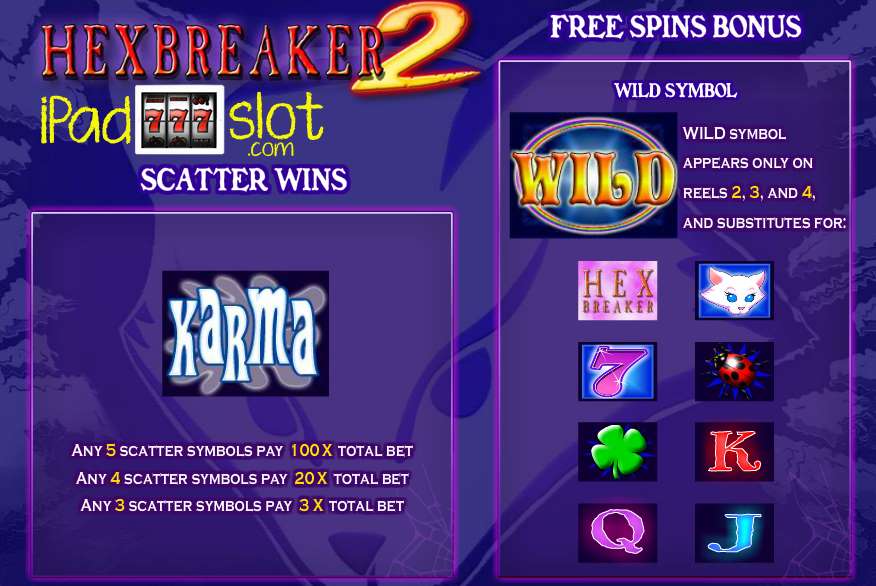 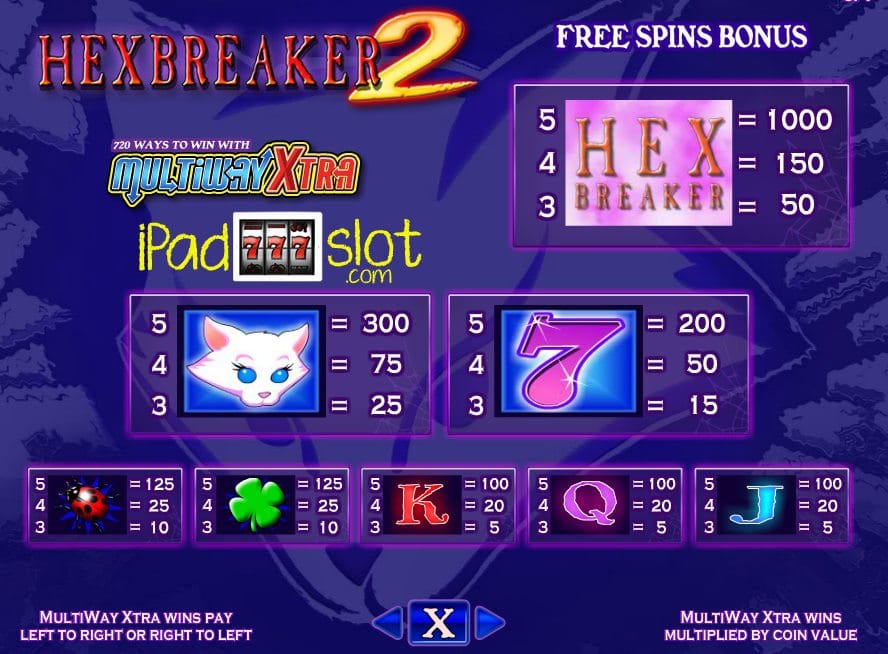 The base game in Hexbreaker 2 is not as entertaining as most other slot games from IGT but once you unlock the free spins feature, the excitement is tripled and you also stand a better chance of hitting some big wins. Hexbreaker 2 gets a 8.5 points rating out of 10 points in our review, this is my partners most favourite slot and one she always seeks out on the casino floor in Vegas when we visit.

If you can’t get to your local land casino to play Hexbreaker 1 or 2 you can play it online for real money or free fin from our approved IGT online casinos in the reviews section of our website.

Double Dragons Slot by Yggdrasil Review & F... A lot of people would agree that two is better always better than one and Double Dragons from Yggdrasil Gaming is clear proof of this. This iPad slot not only f...
Fu Dao Le Bally Tech Free Slot Game Guide Fu Dao Le is an oriental themed iPad slot game that comes from Bally Technologies. When playing this game, players will be love the stunning graphics of the Chi...
Icy Wilds Slots by IGT Game Guide The title of this slot really does tell it all. Icy Wilds slot game is a game that takes place in the freezing cold regions of the world. The only animals that ...
Rocket Fellas Inc Free Slot Game Guide Rocket Fellas Inc Review Rocket Fellas Inc is an adventurous slot created by the game studio Thunderkick. It is a high-variance slot game with 5 reels, four ro...
Lucky Staxx Free Playson Slot Game Guide Lucky Staxx Slot Game Review Lucky Staxx is a simple fruit themed slot by Playson, The game comes with five reels and 40 paylines, it no real bonus features to...
Sugar Pop iPad Slot Game Review and Free Play Those that are already addicted to Candy Crush will be thrilled with this new slot game from Betsoft. Sugar Pop is a 3D slot game that is one of the most colour...
Double Bonus Free IGT Slots Review One symbol that features usually in all the best classic slot machines is the Joker image. Realizing how popular the Joker is with players, IGT managed to creat...
Safari Spirit Ainsworth Free Mobile Slot App Safari Spirit is an online slot game from Ainsworth which comes with a African wildlife theme. Players playing this online slot machine can expect to be virtual...
Icy Gems Microgaming Slot Game Guide Icy Gems Slot Game Review Icy Gems is a nice slot game which comes from Microgaming and we rate it as a must play game for real money gaming. Icy Gems comes...
Lightning Box Angel’s Touch Free Slot Guide The dream of many is to wine and dine with angels when they finally depart the earth. This dream is inspired by the ‘tales’ of how wonderful angels are so it ma...
Free Play Wolf Run Hot Roulette Slots by IGT Wolf Run Hot Roulette is an animal themed iPad slot game. Specifically speaking, this is a wolf themed game as its primary focus is on wolves. Players of IGT sl...
Aristocrat Golden Groove Free Slot Guide Creativity and innovation have propelled Aristocrat to reach the dizzy heights of success that it now enjoys. Nothing exemplifies this more than the online slot...
Western Belles by IGT Free Slots Game Guide IGT gaming technology introduces the players with Western Belles. This is a cowboy-themed iPad slot game, which is backed with a brilliant background graphics a...
Wheres the Gold Pokies Game app Review & Fr... Wheres the gold, by Aristocrat Technologies, is a popular 5 reel, 25 payline iPad pokies game that can be played for free or real money at select casinos with a...
Roman Tribune Konami Free Slots App Guide Roman Tribune is an ancient Rome themed iPad slot game by Konami. The main focus of this game is on the tribunes, this special group that’s was tasked with over...
Lady of Egypt Williams Slot Casino App Lady of Egypt is an ancient Egyptian themed slot game which comes from the SG Interactive stable of fine Williams games. This online slot game is unique in many...
NETENT Jumanji Free Slots Game Guide Jumanji is a branded online slot machine that comes from the leading game developer, that is, Net Entertainment or NETENT as it's also known as. More bonuses th...
Smash the Pig Free IGT Slot Guide Smash the Pig is an online slot from IGT which more or less follows the same script as that espoused in the title. This is to say that when playing Smash the Pi...
Betsoft More Gold Diggin Free iPad Slot Review One of the latest and most innovative iPad slot games to date, More Gold Diggin pokies by Betsoft introduces a fresh twist to slot games by incorporating stunni...
Aristocrat Mammoth Thunder Slots Free Play Guide This is an popular iPad slot game released by Aristocrat Technologies. "Mammoth Thunder" presents the beautiful theme of a native wildlife where the players wil...
Tags: Hexbreaker 2 free slots, IGT free app, IGT free iPad pokies, IGT free iPad slots,