The title of this slot really does tell it all. Icy Wilds slot game is a game that takes place in the freezing cold regions of the world. The only animals that you will find in such regions are the huge polar bears and that’s what you are going to find in Icy Wilds slot game.

The background sounds and graphics of this slot just like other IGT slot game are a cut above the rest and will make your gaming experience more entertaining and absolving. Join the polar bears by spinning the game’s five reels that come with 50 paylines in total. 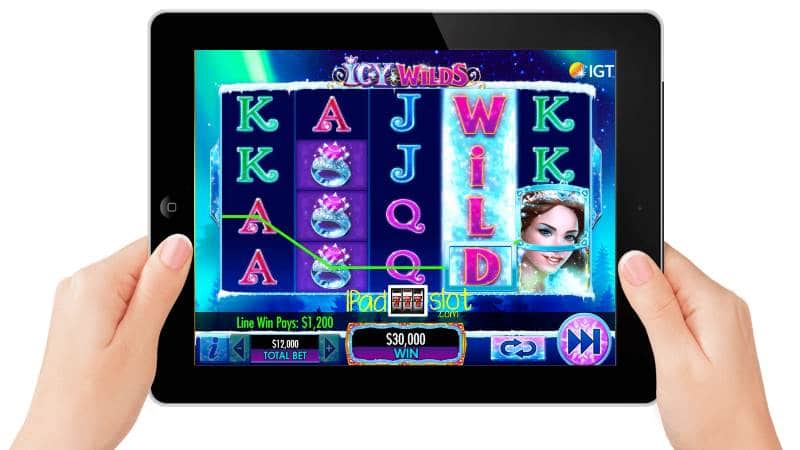 The background of Icy Wilds slot game takes one inside a huge forest that has free standing trees covered by snow as is the ground itself.

On the reels, players will find the following symbols, bear, owl, a crown, a Princess, a ring, and a leopard. There are also card symbols that will pay just a few credits. 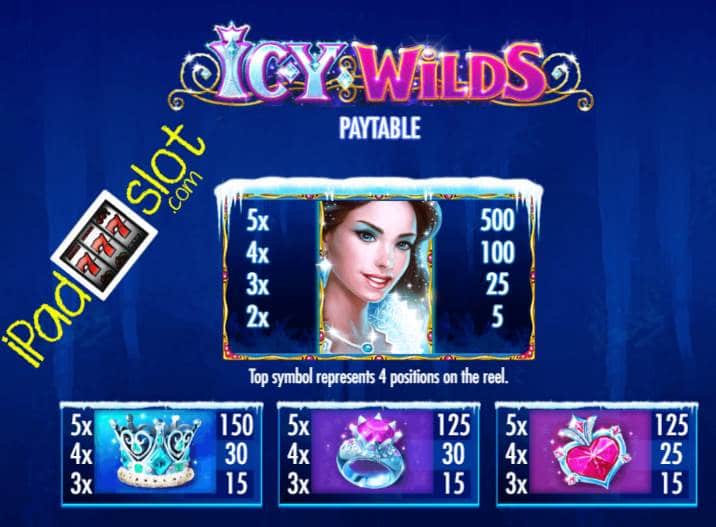 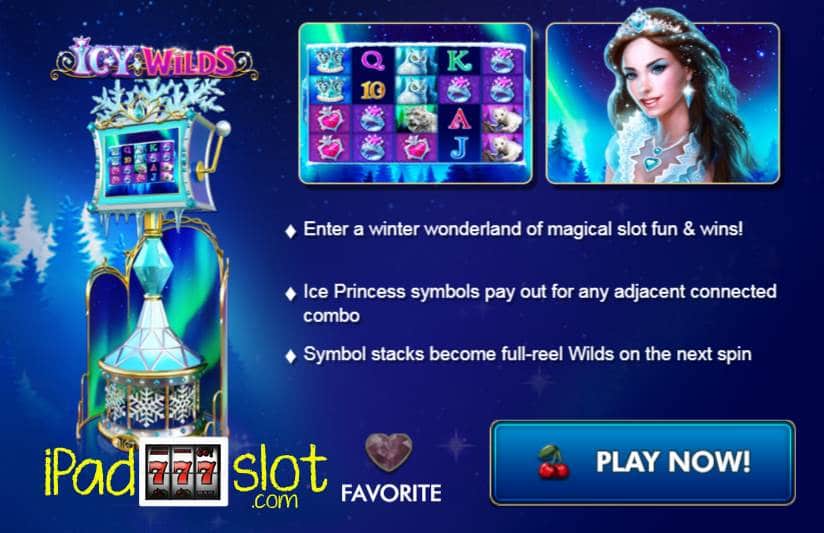 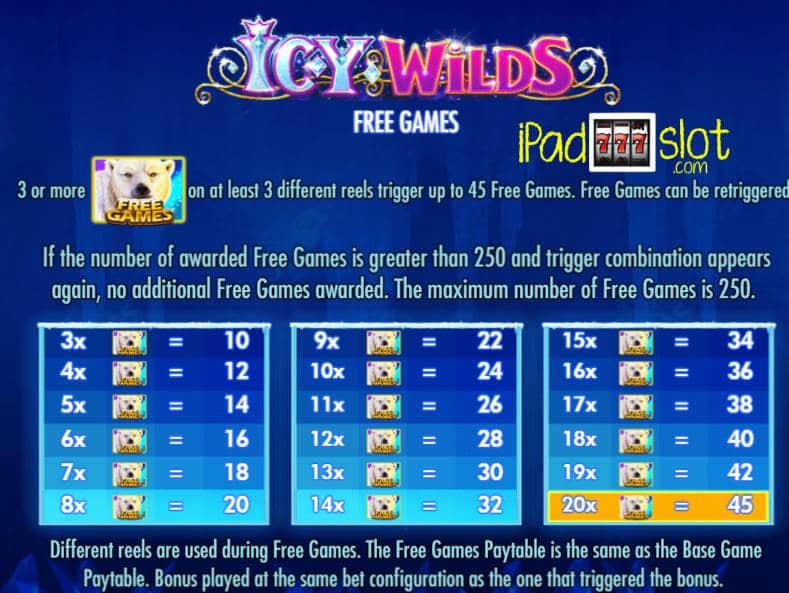 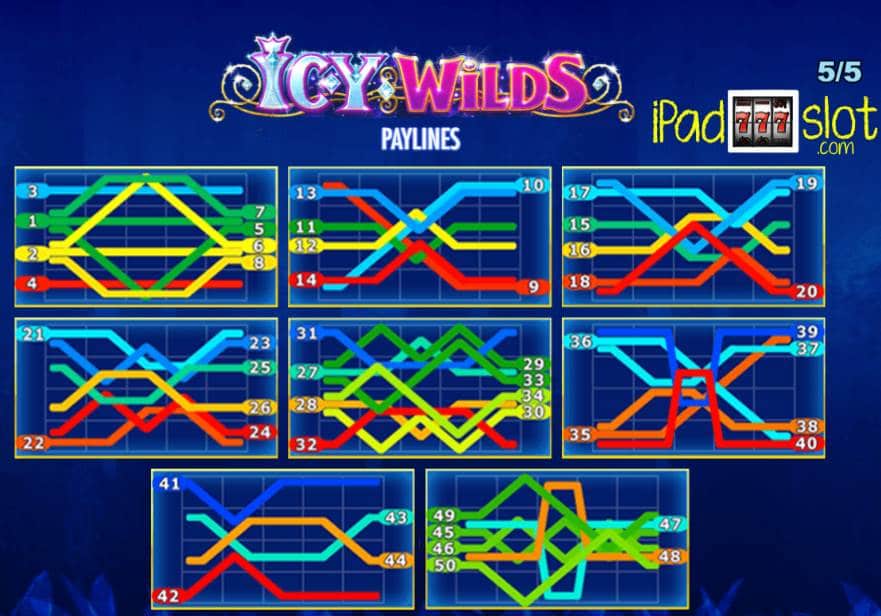 Icy Wilds does not have much in terms of bonus games but the base game itself can be quite rewarding and entertaining. Icy Wilds gets a 7 point rating out of 10 points in our iPad casino game guide.

Magic Pearl Lightning Link Aristocrat Free Pokie... Aquatic themed games are popular with players and great pokies like the Turtle Treasure, Dolphin Treasure and Lobstermania are the great ones that come to mind ...
Play Double Diamond Slots Free Guide Double Diamond from IGT is one of the popular takes on the classic 777 style of slots. This game gets 3 reels and 1 line for the players to get across many rewa...
Betsoft More Gold Diggin Free iPad Slot Review One of the latest and most innovative iPad slot games to date, More Gold Diggin pokies by Betsoft introduces a fresh twist to slot games by incorporating stunni...
Dragons and Pearls Online Slot Review Dragons and Pearls is a cracker Oriental themed casino game by GameArt, which consists of reels of 5 and rows of 3 with 25 paylines. Slot layout One can expec...
Sirens Free IGT Slot Game Guide When talking about sirens, it's only normal that the first thing that comes to the minds of many are the ‘whistling’ electronic ones used to alert someone. Fas...
Big Ben Free Aristocrat iPad Pokies App The Big Ben pokies game takes you on a virtual-trip to London on your iPad via a free app from Aristocrat. The game is based on the city of London and combines ...
Pixies Of The Forest Slots Game Guide Pixies of the Forest, the slot game from IGT shall take the players to a fantasy-filled world where pixies rule. The game gets 5 reels and 99 pay lines for the ...
Mighty Black Knight Free SG Slots Review Mighty Black Knight is an innovative slot game from SG Interactive in the Barcrest studio and it comes with a medieval theme similar to other games in this genr...
Temple of Gold Slot Review and Free Play Guide There are hundreds of treasure hunting slots online with a gold theme, so if you like the Where's the Gold by Aristocrat or the Gold Factory game from Microgami...
Monopoly Roulette Hot Properties Barcrest Free A... Monopoly is one of the very few board games which has managed to stay relevant for decades to pretty much all generations from Granny to the young ones it just ...
Ladies Nite Online Slot Review Produced by Microgaming, Ladies Nite is an exciting game with heaps of vivid graphics when the girls get the party started! With a nightclub type of theme, the ...
Aristocrat Golden Groove Free Slot Guide Creativity and innovation have propelled Aristocrat to reach the dizzy heights of success that it now enjoys. Nothing exemplifies this more than the online slot...
Cats & Dogs Slots by IGT Game Guide Cats & Dogs is an animal themed slot game from IGT. This slot is all about the most popular domesticated animals (cats and dogs) as the graphics i.e. the ba...
Safari Spirit Ainsworth Free Mobile Slot App Safari Spirit is an online slot game from Ainsworth which comes with a African wildlife theme. Players playing this online slot machine can expect to be virtual...
Quickspin Gold Lab Free iPad Slot Review Gold Lab is a science-based free iPad slot game developed by Quickspin. This is 5 reel and 25 pay-line iPad pokie. Players are taken into a scientific laborator...
Aristocrat 5 Dragons Gold Max Free Slot Game Aristocrat Gaming software developers have released several slot machine games in the ‘5 Dragons’ series. The 5 Dragons Gold Max game is one that comes with bet...
Golden Goddess Free IGT Slots Guide This is a fantasy themed slot from IGT that can be played on your iPad or iPhone for free or real dosh. The game is about a Prince and Princess theme and it's b...
Royal Spins by IGT Free Slots Guide The light hearted fruity slots theme bring an element of character to what one can imagine royalty to have been like back in history. Another fine free pokies g...
Free Play Wolf Run Hot Roulette Slots by IGT Wolf Run Hot Roulette is an animal themed iPad slot game. Specifically speaking, this is a wolf themed game as its primary focus is on wolves. Players of IGT sl...
Portomaso Gaming Sushi Booshi Mushi Free Slots R... Sushi Booshi Mushi, no it is not a Japanese recipe if that's what you are thinking and it's a mouthful of a game name that's for sure. Instead this is a recipe ...
Tags: Icy Wilds Free Slots, IGT free app, IGT free iPad pokies, IGT free iPad slots,