The Jeopardy iPad slot game is a branded game from IGT. The game is based on the popular NBC and ABC quiz show by the same name, that is, Jeopardy. The show started airing way back in 1964 with Art Fleming as the original host and is still going strong right to this day.

Almost everything in this slot is based on the quiz show from the symbols that you see on the reels, the background graphics as well as the background sounds. Jeopardy comes with five reels and nine paylines. 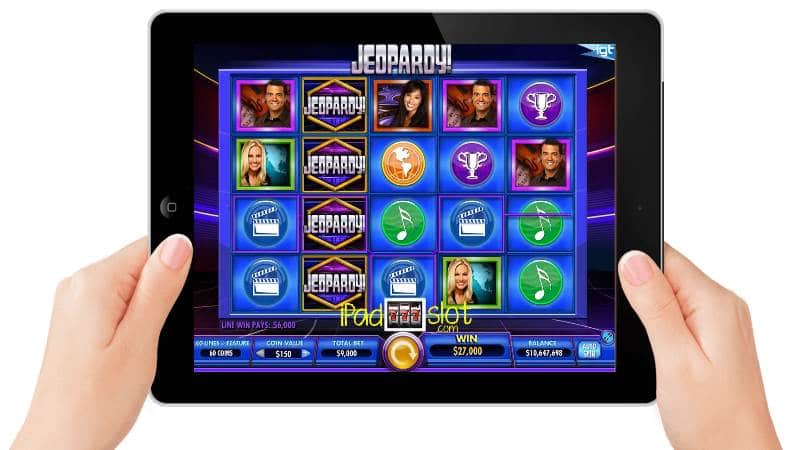 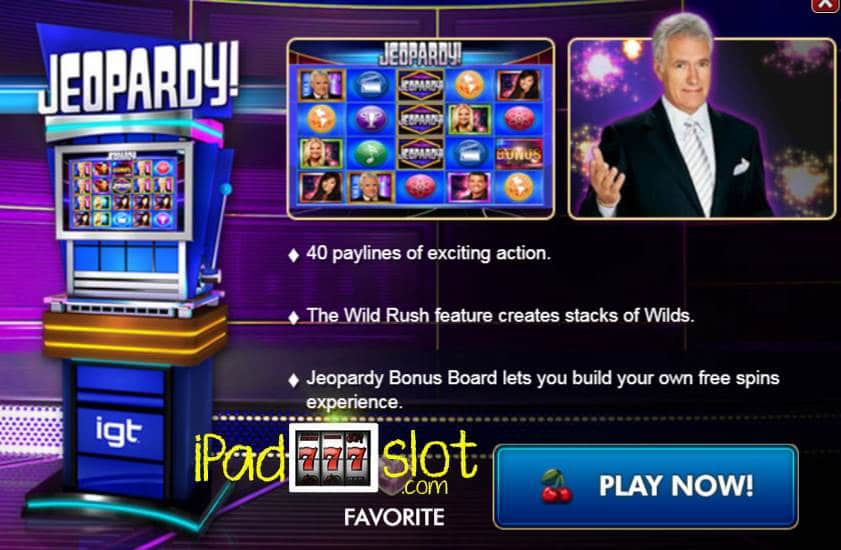 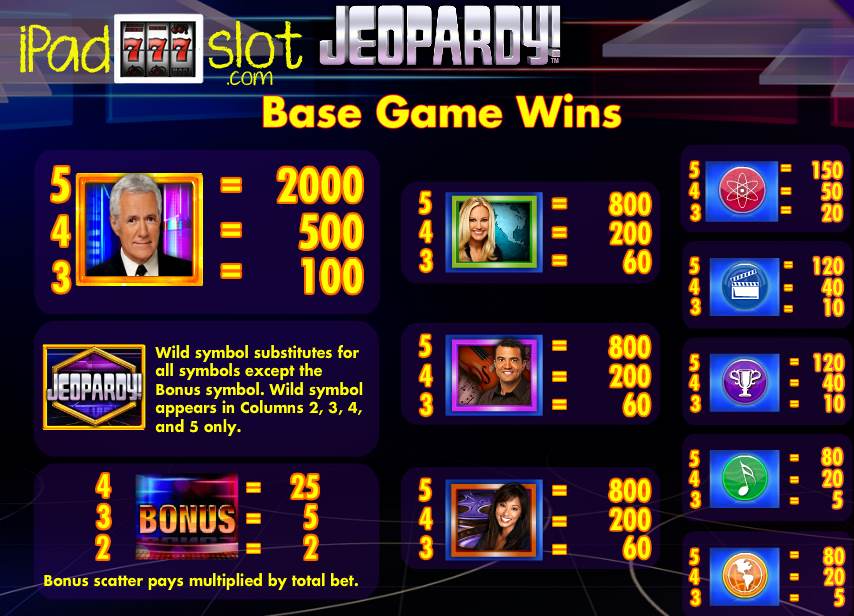 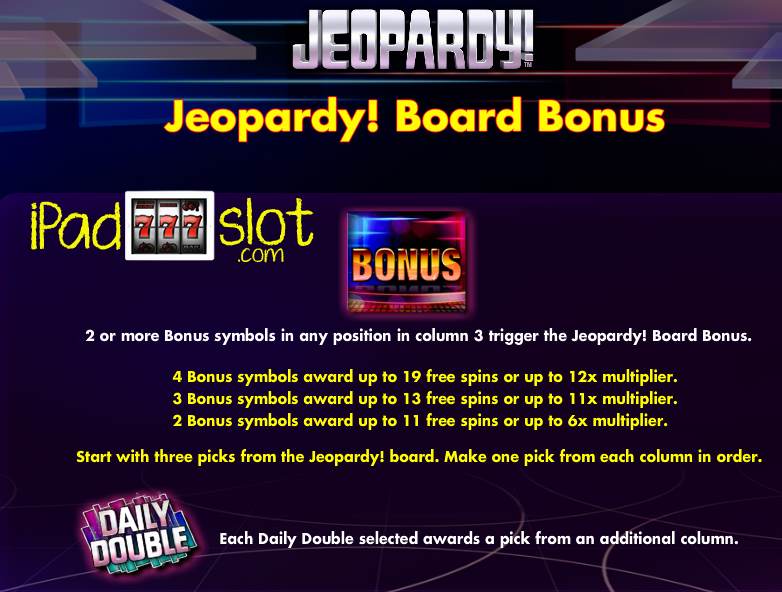 Wild: The wild symbol in Jeopardy slot game is an icon written ‘WILD’. This symbol has the power to transform itself and taking the shape of any other symbol bar the scatter. The wild is also the highest paying symbol in Jeopardy.
Scatter: The scatter symbol in Jeopardy is the icon written ‘BONUS’.
Bonus Symbol: The bonus symbol in Jeopardy doubles up as the scatter, that is, the icon written ‘BONUS’.
Wild Rush: This feature is unlocked when you land at least three wilds on the reels. You will get an additional symbol on the reels, that is, a 2x multiplier icon that will double all your wins as long as it is still showing on the reels.
Jackpot: Jeopardy has a fixed jackpot of 20,000 coins. To hit the jackpot, the player has to land five wild symbols in a row.
Multi-Line Jeopardy Bonus Feature: This feature is activated when you and three scatter/bonus symbols on the reels. The player is presented with 30 boxes, just like the Jeopardy quiz show, and the player has to pick 3 boxes in order to reveal the prize. Prizes include free spins (random number), different multipliers and stacked wilds. 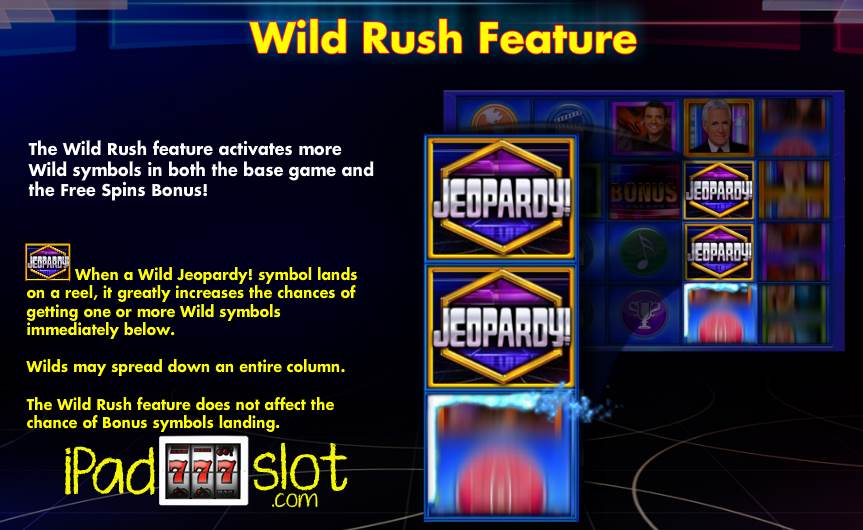 Jeopardy has interesting bonus rounds especially the Multi-line Jeopardy bonus as one can win incredible multipliers and free spins. This slot gets an 8.8 points rating out of 10 points in our review.

Frozen Inferno WMS Casino Slot App Frozen Inferno is an SG Interactive powered Williams iPad slot game which combines two things that do not generally mix in the ‘conventional’world i.e. ice and ...
Wonders of Africa Free IGT Slots Game Guide Different continents and regions are known for different things. The European continent is known for its brilliant medieval and modern day architecture, the Sou...
Aristocrat King of the Nile Free Pokies Game King of the Nile is an Aristocrat slot game which comes with an ancient Egyptian theme. Players looking to start their adventure in King of the Nile slot game c...
2Can Free Aristocrat Slots Game 2Can Free Aristocrat Slot Review Embark on a journey through the exotic jungle forests on the reels and unlock the hidden treasure bonuses Aristocrat has creat...
Fairy Queen Novomatic Free Slot Game Guide Slots offer players an opportunity to escape the daily struggles of the world and find comfort in a virtual world where everything is perfect and there are no s...
Sweet Skulls Sweet Daybreak Free Slots Guide Sweet Skulls Sweet Daybreak is a three level progressive slot game from Aristocrat. This is a mariachi-themed slot which comes with five reels and 80 paylines. ...
Desert Spirit IGT Free Slot Game Guide Desert Spirit from IGT is a slot game that takes you to the Southwest, players get up close with native Americans on the reels. Fast Start Desert Spirit IGT Fr...
IGT Fire Pearl Slots Free Game Guide Fire Pearl is an Asian themed slot game from the IGT range of exciting free mobile slot game apps. This is one of the new best from IGT in the Asian genre which...
Wild Wolf Slots By IGT Free Play Guide Wild Wolf is a brilliant slot machine game, which displays some of the most stunning visuals of wolves and their lifestyles. Apart from this, the game consists ...
In Bloom Free Slots by IGT Guide In Bloom is a unique and light flower themed free iPad slot game app from IGT. The has gets 5 reels, 3 rows, and 40 pay lines and a host of bonus games and feat...
Aristocrat Wild Fortune Serengeti Stampede Slot ... Wild Fortune Serengeti Stampede is a progressive online slot that is powered by Aristocrat. The mere fact that is a progressive game makes it a great propositio...
Triple Cash Wheel Bally Android Free Slots App G... Triple Cash Wheel is a retro-themed Bally Android compatible free or real money slot game app from SG Interactive. While most retro themed games are all about s...
Thunderstruck iPad slots review Based on the god of Thunder, Thunderstruck slots is a very popular online game for iPad punters. Since its release in 2004, it has attracted a large number of p...
How to Play Guide Bloopers Slot by Elk Elk a casino game developer based in Sweden vouched not to release many casino slots but instead work on releasing a few quality games that will leave players a...
Jewel of the Arts IGT Slots Game Guide Jewel of the Arts is a Japanese slot game developed by world renowned game developer IGT. The primary focus of this game is exploring the artistic side of Japan...
Super Sevens IGT Free Slot Game Guide Super Sevens is a classic online slot machine from IGT which is a bit unique from other classic titles. This is yet another great "sevens" themed game from IGT ...
Weird, Wicked & Wild Free Play Pokies Guide Weird, Wicked and Wild is a free online pokies machine which comes from the Aristocrat company. The title of this online slot does by all means gives the player...
Get Clucky Free IGT Slot Review & Game Guid... Play your way through an eggciting IGT gaming experience which has been designed on 5 reels and 20 paylines which sports a number of fantastic features includin...
Lady of Egypt Williams Slot Casino App Lady of Egypt is an ancient Egyptian themed slot game which comes from the SG Interactive stable of fine Williams games. This online slot game is unique in many...
Shooting Stars Online Slot Review Shooting Stars Online Slot Game Review The title of this slot will have you thinking about everything cosmic and celestial but alas, there is nothing like that...
Tags: IGT free iPad pokies, IGT free iPad slots, Jeopardy Slots,