Mr. Cashman Jewel of the Enchantress is a ripper (great) pokies game app released by the well-known Aussie based slots manufacturer Aristocrat. What’s appealing about this game is that it comes with five special random bonus features to boost your chances of some big wins.

There is also a chance of winning up to 40 free games among other decent rewards. The action in this mystery-themed slot game takes place on the usual 5×3 grid layout and 20 paylines. Besides the bonus features, you will also find several symbols to help you form winning combinations.

This pokies machine is fully optimized to be played on mobile and desktop, and it’s available at Cashman Casino for free – how great is that! 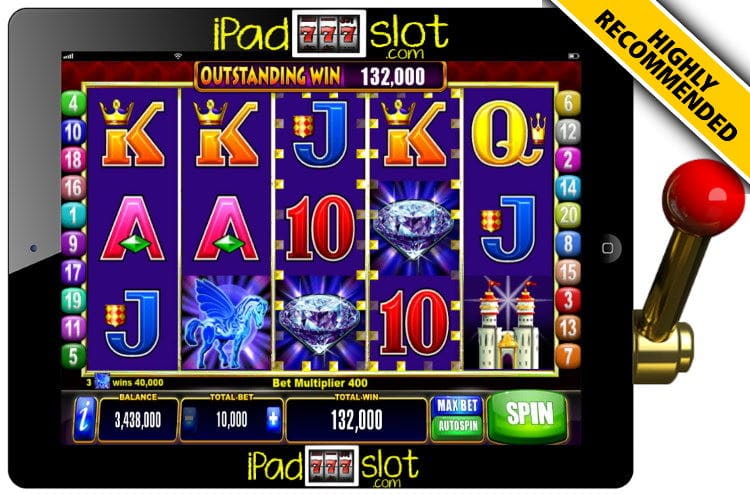 ** Similar popular games to Aristocrats Mr. Cashman Jewel of the Enchantress pokies machine might be available on this site to enjoy for fun or real moolah gaming on your iPad, iPhone, Android, Windows gadget with or without an app download. Just take a peek at our FREE games page here. ** 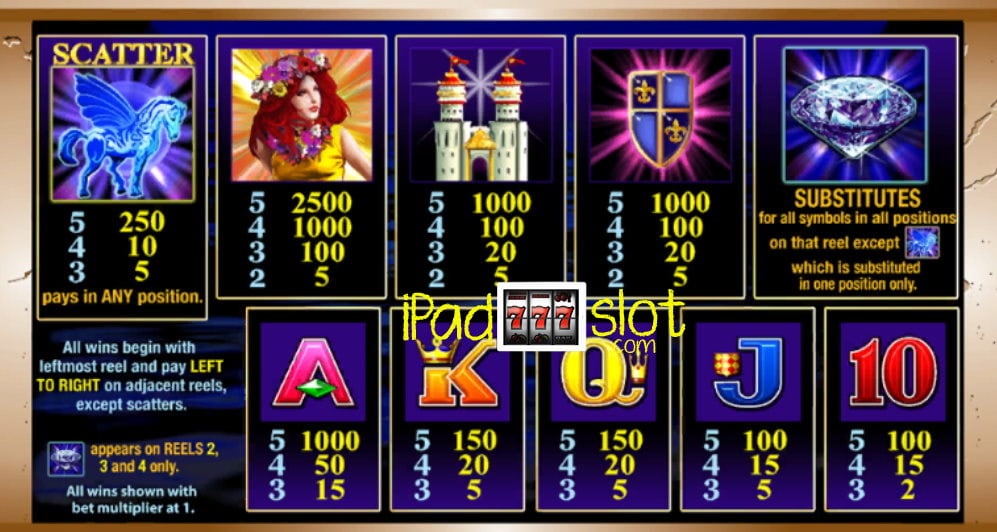 Aristocrat’ Jewel of the Enchantress is a mystery-themed video slot which draws some inspiration from the common imaginary supervillain featuring in American comic books. The game is designed with bold and attractive colors.

The background features a blue ocean and a partially visible island in the back. The symbols appear on a black backdrop and include a blue unicorn, the Enchantress, a castle, a shield, and a diamond. Also, you will find traditional poker card symbols A, K, Q, J, and 10.

The game play in Jewel of the Enchantress is simple and straightforward. You will find a layout of 5 reel and 20 winlines which pay from left to right. It has a wide betting range that accommodates both low and high roller players.

The fun part of the game is when the emoji or Mr. Cashman appears to unlock five different bonus features. There is the usual Aristocrat control panel located below the reels. Click on ‘i’ to view the paytable and rules of playing the game. 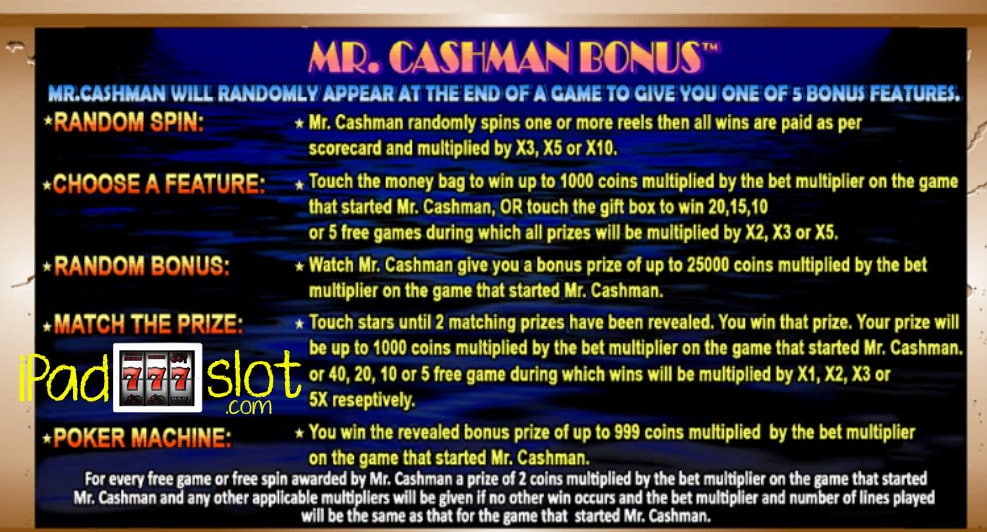 There are five main symbols, including the scatter and wild symbols as well as the traditional playing cards.

These symbols are in two groups consisting of low and high paying.

The glittering diamond is the Wild of the game which substitutes all other symbols scatter.

The blue unicorn is the Scatter symbol of the game which pays 250 when 5 of a kind appear in any position.

Additionally, Mr. Cashman will randomly appear at the end of the game to give out five bonus features: 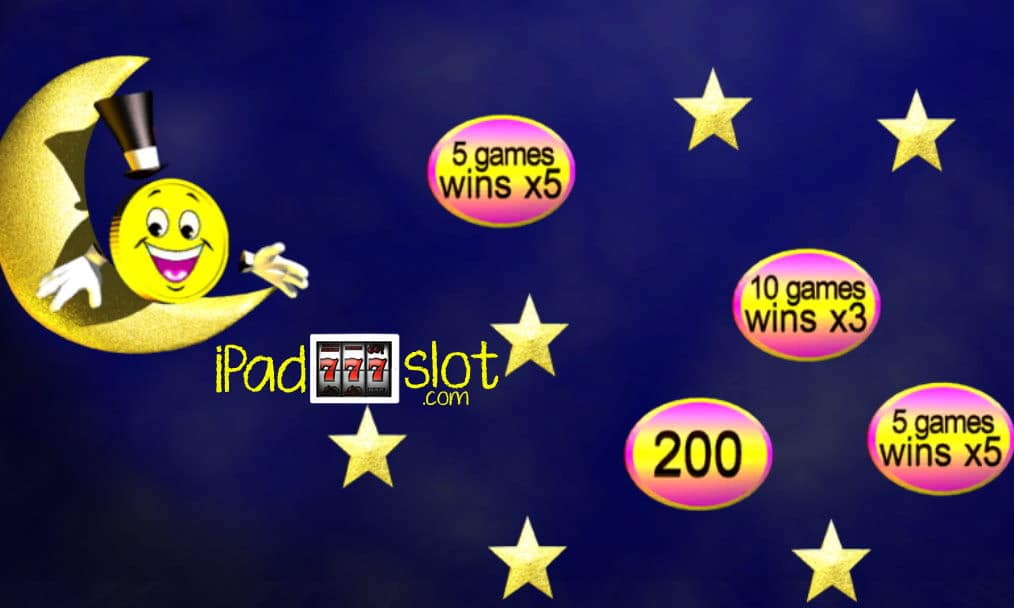 There are many online pokies in the Mr. Cashman series that has been around for over 20 years now, but what makes Jewel of the Enchantress stand out from others is the original fantasy style  theme and of course, the five great bonus features.

It also comes with additional symbols that reward high payouts when you spin up the right symbols. We rate this mobile slot a solid 8.5 points from 10 in our guides of the best Aristocrat pokies to play on an iPad, Android and iPhone.

Big Win on Mr. Cashman Jewel of the Enchantress

The Great Winaldo Free Slots Game Guide The Great Winaldo is a iPad slot game inspired by the world of magicians and illusionists. Created by IGT you are assured of some fun either online for free or ...
Book of Maya Novomatic Free Slot Game Guide Many years after the fall of the Mayan Empire, a lucky adventurer discovered a Mayan temple that is still standing in Central America. Many themes of this perio...
Phoenix Fantasy Slots By Aristocrat Free Play Gu... The magnificent bird, Phoenix has been already portrayed in a wide variety of mythologies. Taking this into consideration, this online slot game features the ap...
Genie Wild Slots Game Guide is a pokie that has been created by NextGen and it surely delivers the action that players are seeking. With this game there are 25 paylines, offering multiple ...
Island Eyes Free IGT Slots Game Island Eyes is an online slot machine which comes from the IGT company. Island Eyes is an adventure-themed game that takes the player deep inside a thick forest...
Lucky Lady’s Charm Deluxe 6 Free Slots The Lucky Lady's Charm is one of the most popular iPad slot series in the gaming market, this Novomatic slot is the latest edition and the third in line thuus f...
Monopoly Roulette Hot Properties Barcrest Free A... Monopoly is one of the very few board games which has managed to stay relevant for decades to pretty much all generations from Granny to the young ones it just ...
Big Red 2 Free Slots Game Review Classic slots are a favourite of most gamers and in this slot, Aristocrat Gaming fuses elements of classic slots and also elements of modern video slots in brin...
Miss Kitty Slots by Aristocrat Free Play Guide This FREE iPad slot game features a beautiful cat based theme which revolves around the key character, Miss Kitty. This lovely cat blinks her big eyes at you an...
Blazing Goddess Lighting Box Games Free App Guid... Blazing Goddess is an online slot machine which comes from the Lightning Box stable of awesome pokies. This online slot machine comes with a Polynesian theme as...
Sugar Shack Social Free Play IGT Slots Guide Sweetness is all that you will find in this IGT powered video slot. Sweetness in this game stems from the fact that it is a candy themed game. From the symbols ...
NextGen Tianlong Slots Game Review The Dragon is a sacred symbol in the oriental way of culture because it is thought to be lucky for the people. This iPad slot machine has been developed jointly...
Club8Casino Guide & Review Social casino gaming for Aussie players is really hot in the land down thanks to the Club8Casino. Several well-known & highly popular southern Queensland ba...
IGT Electric Tiger Free Slot Game Guide Electric Tiger delivers a magnificent display of luminous fruity symbols. The retro theme is complemented by fantastic sound effects which enhance gameplay and ...
Gold Stacks Queen Marie Free Slots Powered by Aristocrat, Gold Stacks Queen Marie is a free online slot machine which comes with a Royal theme and some awesome jackpot rewards to be won. Gold St...
Long Teng Hu Xiao Slots Game Review Anyone who loves reading mystery books will know that the greatest collection of mystery books all come from Asia. Long Teng Hu Xiao is another mystery from the...
Mythical Treasure Fortune Gods Jackpot Slot Guid... Pocket Games Soft in recent times has embarked on a drive to launch jackpot versions of its most popular online slot machines. One of such games is Mythical Tre...
Mayan Riches Free Slots Game Guide Mayan Riches slots is a popular iPad game developed by IGT, which is based on a unique theme of the Red Indian culture. Game play wise, this slot contains 5 ree...
Crown Of Egypt Free IGT Slots Guide Crown of Egypt from IGT is an Egypt-themed game slot that has people falling in love with it due to the classic symbols and features that are IGT awesome. The f...
Lucky Little Gods Online Slot Review Lucky Little Gods is an anime-themed online slot machine which comes from the Microgaming company. Coming with an anime vibe, this, therefore means that Lucky L...
Tags: Aristocrat android slots free, Aristocrat free iPad slots, Aristocrat free pokies, Aristocrat iOS free slot app, Aristocrat ipad pokies free, Aristocrat iphone pokies free, Aristocrat iphone slot free, Aristocrat pokies app free, Aristocrat slot app free, Aristocrat social pokies, Aristocrat social slots. Aristocrat android pokies free, Aussie free pokies, Aussie pokies, Dolphin Treasure Gold, Jackpot pokies, Mr Cashman free pokies, Mr Cashman free slots, Mr. Cashman Jewel of the Enchantress,