Kawaii Dragons is a 5-reel and 25 payout line supported fun slot machine game, which assures to show dragons in the most beautiful light. Developed by Booming Games, this game is a visual treat to all the players who love a little dragon themed action in their iPad slot gaming.

Kawaii Dragons is one of the best slot machine gaming experiences to be had from Booming Games. Right from the proper theme music to the reel structure, everything is good about the game. 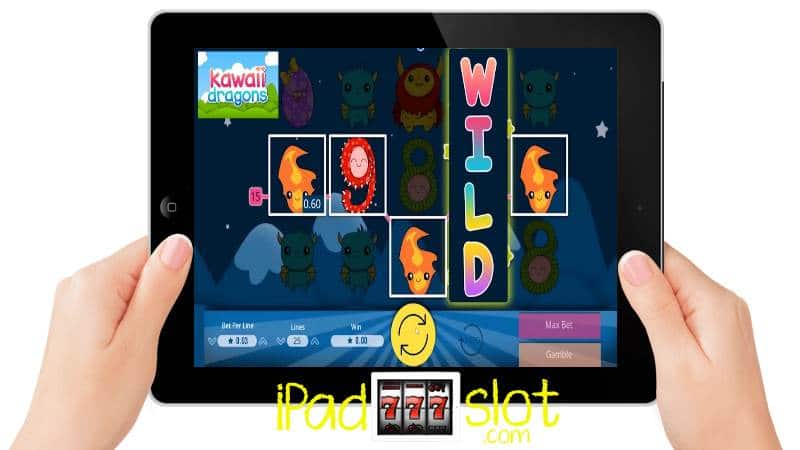 ** The Kawaii Dragons by Booming Games slots app and / or other similar slot machine games may be available to enjoy on your iPad, iPhone, Android, Windows device, PC or Mac. Just take a look at our FREE GAMES PAGE HERE. **

The characters of the game are based on the Japanese culture and dragons. Of course, unlike other games, dragons are shown in a good and beautiful character. 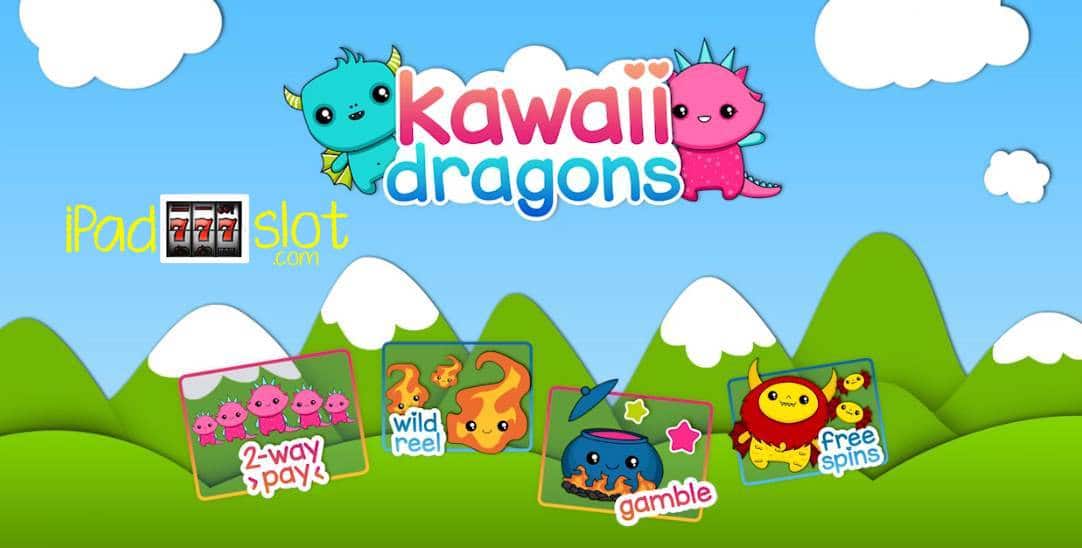 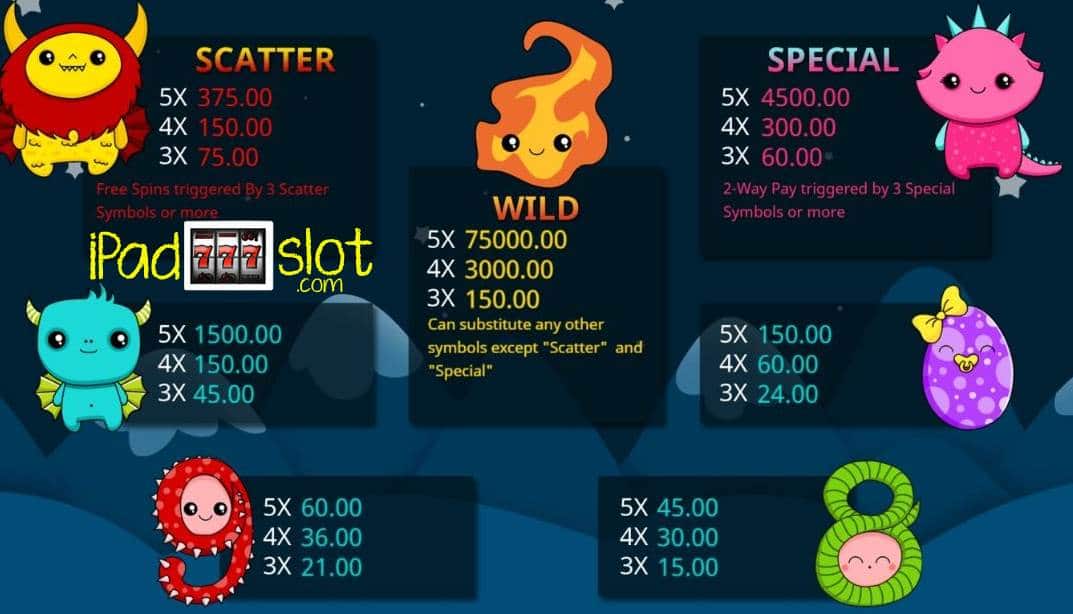 Kawaii Dragons by Booming Games is a fun slot machine game overall, suited for most players who prefer to play dragon genre games it’s one of the best that we have reviewed from Booming Games. The theme of this game and the payouts makes this a fun and possibly rewarding game so we score it a 7 from 10 in our guide.

Another awesome Dragon genre slot below

More Chilli Slots app by Aristocrat Free Play Ve... More Chilli is another exciting free iPad slot game app that is developed by Aristocrat Technologies. This pokies game represents the classic theme of Mexico an...
Tetris Super Jackpots Bally Free Play Slots Guid... Nearly two decades ago, the game of Tetris was released to the world thanks to Alexey Leonidovich Pajitnov who was a Russian video game developer. Since its rel...
Wild Splash Slots by Aristocrat Free Play Guide If you are an avid fan of Aristocrat iPad slot games and you're also looking to try out a simple yet elegant game, then "Wild Splash" will be an appropriate cho...
Chili Chili Fire Slots by Konami Guide Chili Chili Fire is another super iPad compatible slot game developed by Konami. The slot comes with a Mexican wedding theme so it's packed for of colours and f...
Ellen’s Dance Party Free Online Slot Game Ellen DeGeneres has had a massive influence on the American culture through her daytime Ellen DeGeneres talk TV show. Ellen seems to be best friends with all of...
Buffalo Spirit by WMS Free Slots Guide Buffalo Spirit iPad slot from WMS is features a colorful western nature theme and interesting game play that you are definitely going to enjoy. The reels are fu...
IGT Dungeons and Dragons Crystal Cavern Free iPa... Dungeons and Dragons Crystal Cavern is a mystical themed iPad slot machine designed and powered by IGT. In this game, the forces of evil are rising up against f...
Wild Fiesta’Coins Free Aristocrat Slots Ga... Have you ever done something crazy before? If not or if you are an introvert who doesn’t like doing the wild stuff, Aristocrat brings you Wild Fiesta'Coins slot...
Aristocrat Moon Drifter Free Play Pokies Guide This iPad compatible slot game is loosely based around Clint Eastwood. It features an innovative game play, extended reels, a special bonus round, and much more...
Wolf Moon by Aristocrat Free Slots app If you are ready to have a good time gaming and seeing abundant wildlife in reservation then it’s an ideal time to spin the reels of Wolf Moon. The game is slot...
Red Phoenix Rising Free Slots Review Red Phoenix Rising slot machine by Red Tiger Gaming presents casino lovers a journey to China featuring one of the most famous ancient birds known as the Phoeni...
Heart of Romance Free Konami Slots Guide Heart of Romance is a love themed slot game developed by Konami. Players who are looking to start playing this slot game will need to set in motion the game’s f...
Cash Express More Chilli Slot Free Play Guide Cash Express More Chilli is a fun game from Aristocrat which comes with a Mexicana theme. Mexicans are known for their love for chilli and in this online slot m...
Thai Dragon Free Slots by GameArt Guide Thai Dragon is a classic game from GameArt, who has taken an initiative to develop the slot machine game with a theme based on Thai Mythology. Quick Start Guid...
Dolphin Treasure Gold Free Aristocrat Pokies Are you ready for more fun than the original Flipper themed pokies game loved by millions around the world? ok well check-out the Dolphin Treasure Gold slot mac...
Wings Over Olympus Free Slots Game Guide Wings Over Olympus is an ancient-themed with a military feel slot game which comes from the Aristocrat stable of awesome free mobile slot games. To start one’s ...
Monopoly Bring The House Down Barcrest Free App It's time to ‘bring the house down’ and take all the money in this SG Interactive powered slot game from the Barcrest Studio of popular online free and real mon...
Sun & Moon Free or Real Play Slots App In Mayan astrology calendar, the Sun & the Moon are considered to be the symbols of prosperity, fortune, and wealth. Taking this into consideration, this on...
Big Red 2 Free Slots Game Review Classic slots are a favourite of most gamers and in this slot, Aristocrat Gaming fuses elements of classic slots and also elements of modern video slots in brin...
Big Catch Novomatic Slots Game Preview Big Catch is a nautically themed iPad slot game app which comes from the Novomatic company. In this game, players can expect to encounter different species of a...
Tags: Booming Games slots, Kawaii Dragons slot,