Kings Honour is a colossal Barcrest Studio iPad and iPhone compatible pokies game from SG Interactive, it comes with a regal theme and a split reel feature (5×4 reel set and a 5×12 reel set).

There are 100 paylines across the two game reel sets. The most impressive thing when it comes to this innovative video slot is not the theme but rather the numerous bonus rounds that are part of this game. Without wasting much time, let’s jump into the full review to see all of the features that this slot comes with.

** The Kings Honour Barcrest slot game may be available to play for free on your iPad, iPhone, Android, Windows device, PC or Mac. Just take a peek at our FREE GAMES PAGE HERE. ** 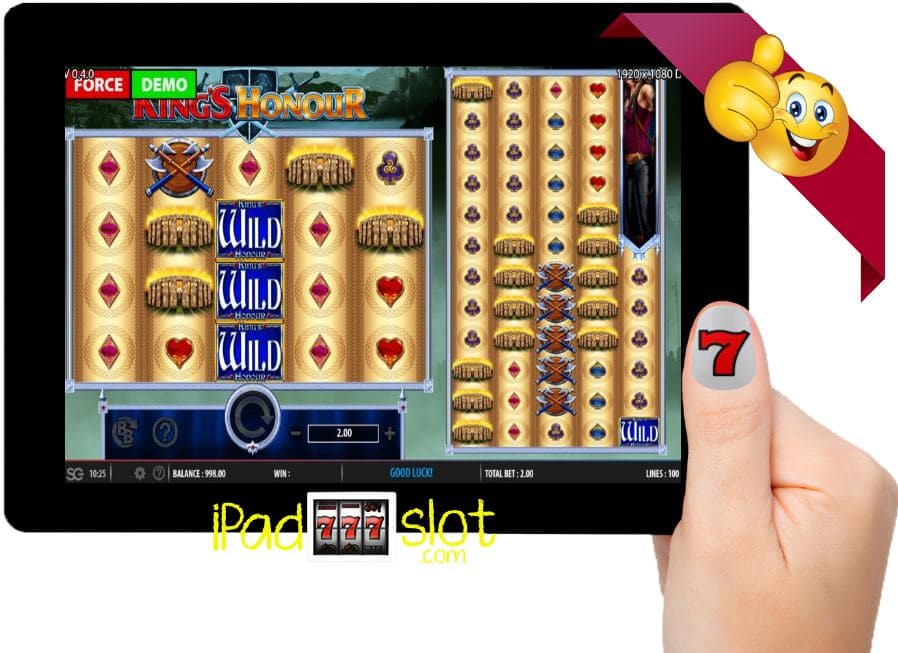 The backdrop of this slot game is set against a coastal landscape acting as the background. The two reel sets are covered by a brown colour so it looks really great overall.

The symbols that players will find on the reels in the game include the King, Queen, chalice, brick wall, axes, a crown and playing card suits. 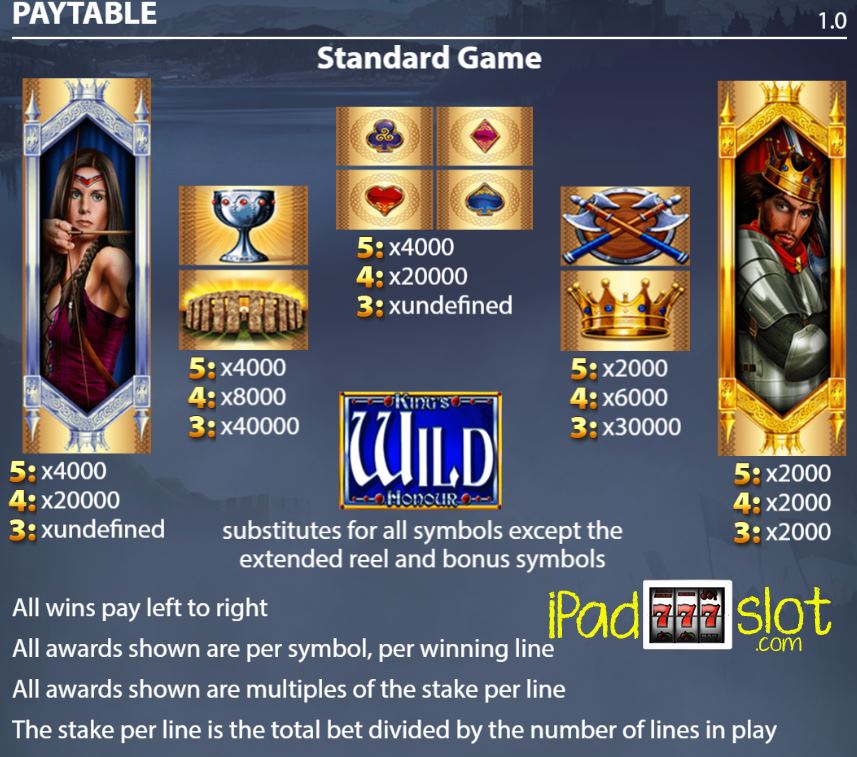 This is a random bonus which occurs at any time. The feature will see snow falling onto the reels, once it melts away, it leaves numerous wild symbols on the reels. A maximum of 50 wilds may be left on the reels. 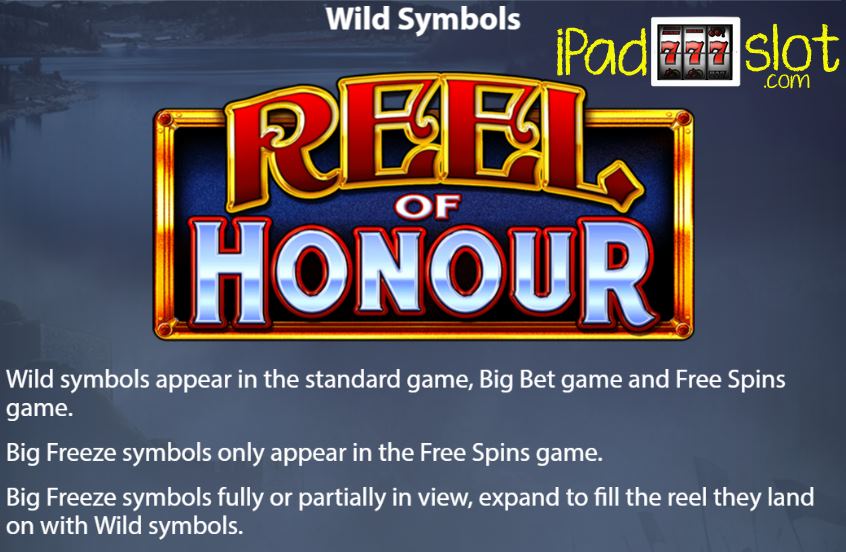 This feature is triggered when the player lands a winning spin in the Mystery Free Spins Compass Feature. 4 trails will be presented to the player and the player is asked to choose one. When the player picks one of the trails, he will reveal a random number of free spins.

The Reel of Honour icon is a bonus symbol which carries the properties of a wild. This symbol has the power to expand and cover all reel positions when it lands on the reels.

This game can be triggered when the player opts to play the Big Bet Game. The player will have to wager with a higher stake but in return, more ways to win are opened up.

King’s Honour is a terrific 100 win line Colossal Reels game from Barcrest and it’s a must play pokies machine in our opinion.

It has super free spins, terrific pot multipliers, stacked wild symbols and all the Colossal Reel bonuses that you know and love already.

For the lovers of the Big Bet feature this game includes this as well. Kings Honour is an impressive slot game which comes with numerous lucrative bonus rounds. The RTP of this game stands at 97.75 percent. This slot gets an 8.5 point rating out of 10 points in our top Barcrest iPad pokies games to play.

Turtle Treasure Slots by Aristocrat Free Play &#... The deep blue sea is filled with wonders, starting from magnificent wildlife to the lost treasures. Thus, as a player, you will explore the beautiful coral reef...
Aristocrat Walking Dead Free Slots Guide Update: We now have a free play demo version here of The Walking Dead online slot machine. Undoubtedly, The Walking Dead is one of the most famous zombie-bas...
The Wizard of Oz Emerald City WMS Slots App The Wizard of Oz Emerald City is an online slot game from SG Interactive. The game is one of many ‘Wizard of Oz’ themed slot games to come from the same develop...
Mystic Panda Free Slots App by Ainsworth Guide Mystic Panda is an oriental themed game from the Ainsworth range of awesome iPad compatible slots.  Mystic Panda can be accessed both on the desktop and also on...
Zeus III Free WMS Slot Game Guide This WMS game is titled Zeus III for a reason. The reason being, it is a direct sequel to the other Zeus slot games that were a big hit around the world at land...
Monopoly Roulette Tycoon by Williams Games Monopoly Roulette Tycoon is a game from SG Interactive, It's actually from the Williams game development studio of awesome games. It fuses two games into one, w...
Enchanted Unicorn Slots Game Guide This is a fantasy themed slot from IGT which takes you into a mythical forest that is full of unicorns, mushrooms and some lovely flowers. Your adventure in thi...
Shogun Land by Habanero Slots Review Shogun Land by Habanero is a cracker iPad slot machine game by this relatively new developer company. The game is based on the Japanese traditional culture, and...
Gold Coin by IGT Free Slots Game Guide Gold Coin slot game is a great addition for players from IGT. This is a retro-themed slot game which mixes features from past slot games and features from moder...
Caribbean Kitty by IGT Slots Game Guide Caribbean Kitty is an animal themed slot game from IGT. This progressive slot game primarily focuses on cats, therefore, when spinning the reels of this slot, p...
Miss Kitty Slots by Aristocrat Free Play Guide This FREE iPad slot game features a beautiful cat based theme which revolves around the key character, Miss Kitty. This lovely cat blinks her big eyes at you an...
Crystal Cash Ainsworth Free Slot App Guide Crystal Cash is a big riches themed slot game created by the Ainsworth company. The slot was primarily played as a land-based slot machine but due to the popula...
Celtic Queen Social iPad Slots Review Are you ready to discover a unique Aristocrat free iPad slot game with an interesting & innovative game theme on your iOS device? If yes, then get ready to ...
Aztec Goddess Free Slots Game Guide Ancient Mexican history is dominated many tales of the Aztec empire and culture. Aristocrat Gaming in this slot developed a game which retraces this history whi...
Best Free or Real Money Mobile Slots & Poki... If you enjoy playing slots and love watching movies, then what could be greater than mixing the two together in the year of 2021, we also included a great serie...
Fortune Gods Free PG Soft Game Guide Fortune Gods is a PG Soft powered online slot machine that comes with a terrific Chinese and oriental theme. This is one of the greatest Asian themed pokies to ...
Elvis the King Lives By WMS Free Play Game Guide The king has not left the building, in fact he has been themed into a great iPad compatible slot game. Elvis the King Lives has been created by WMS (Williams In...
IGT Dungeons and Dragons Crystal Cavern Free iPa... Dungeons and Dragons Crystal Cavern is a mystical themed iPad slot machine designed and powered by IGT. In this game, the forces of evil are rising up against f...
Golden Dollars Free Ainsworth Slots Guide While playing at online casinos is always a fun adventure, sometimes we all remember the good old days when we would take turns to spin a mechanical slot machin...
Fire Opals IGT Free Slots Guide This is a Hawaiian themed video slot from IGT. This slot combines precious gemstones and volcanoes in a stunning display of graphical brilliance. Quick Start G...
Tags: Barcrest free app, Barcrest free iPad pokies, Barcrest free iPad slots, Kings Honour slots,