Asian themed slot games are a favourite of many and in an attempt to provide even more great oriental themed games to casino players, Konami has developed this Asian themed game which is a must play. This slot fuses a bit of everything from Asian culture from the symbolic animals to the symbolic wealth icons.

In order to start one’s adventure in China Mystery, the player simply has to set in motion the game’s five reels that come with 30 paylines. China Mystery can be played both on the desktop and also on mobile devices. 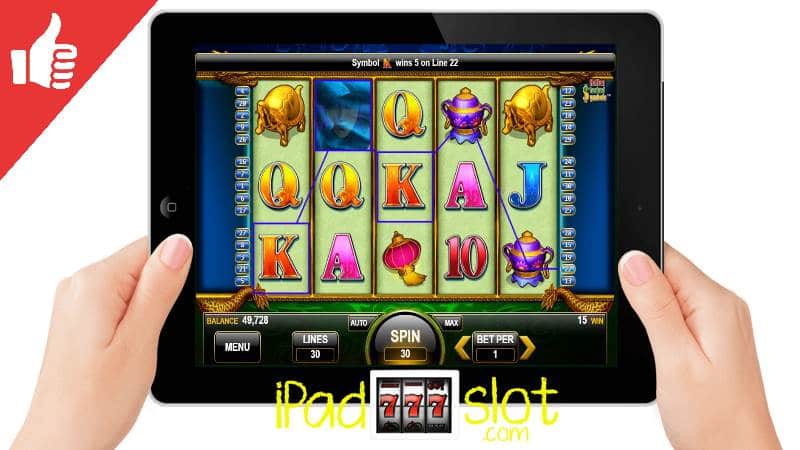 ** The Konami China Mystery app and / or similar slot games may be available to play on your iPad, iPhone, Android, Windows device, PC or Mac. Just take a peek at our FREE GAMES PAGE HERE. **

The symbols that players will find when spinning the reels of this game include a gold coin, Chinese inscription, golden turtle, kettle, lantern and traditional card symbols. 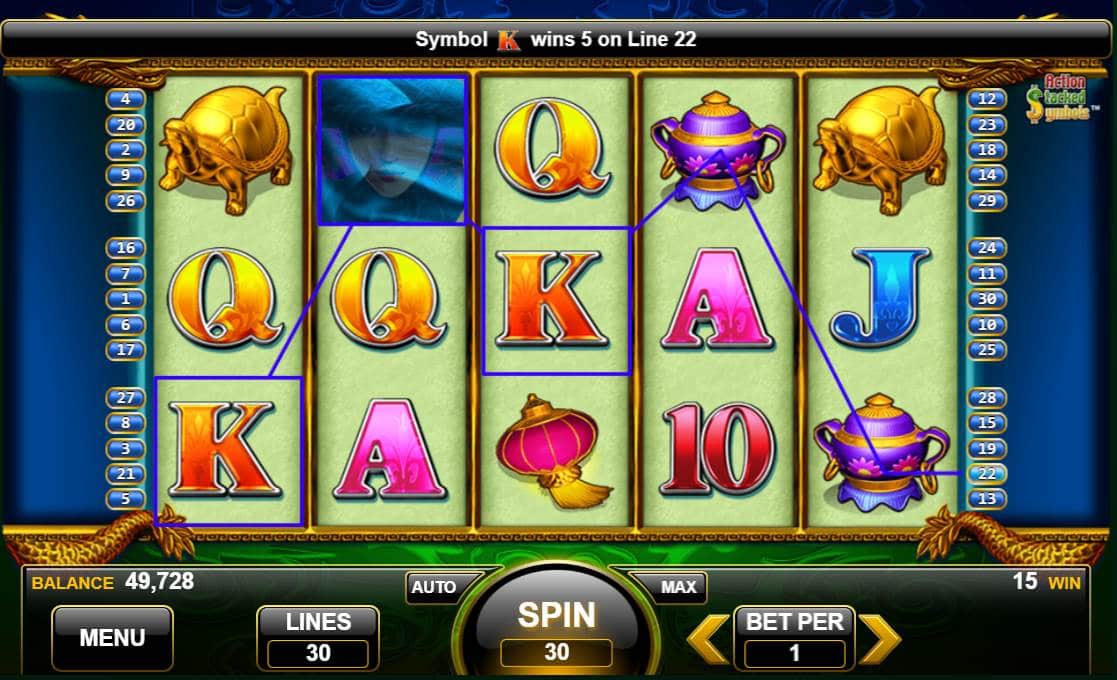 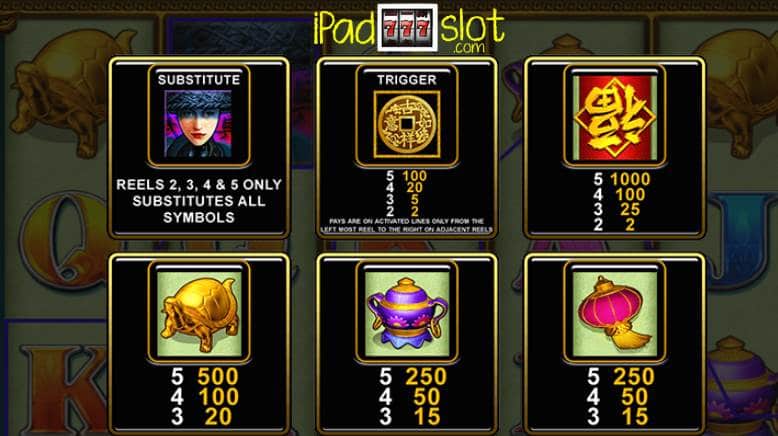 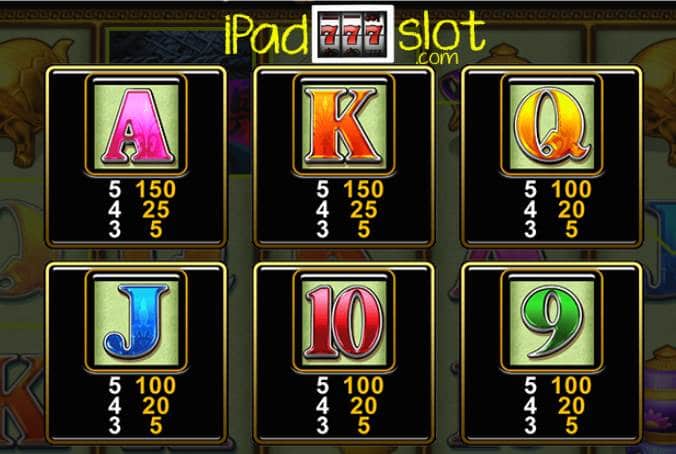 China Mystery is a game that will appeal to players who prefer playing Asian themed games and it’s one of Konami’s most popular iPad slot games. This game gets a 7 point rating out of 10 points in our review of Konami casino games.

Crazy Goose Free IGT Slot Review In this comical spin on animated animals, you are given the opportunity to explore the farm life over 5 reels and 100 ways to win big. The vast amount of paylin...
Mystic Panda Free Slots App by Ainsworth Guide Mystic Panda is an oriental themed game from the Ainsworth range of awesome iPad compatible slots.  Mystic Panda can be accessed both on the desktop and also on...
101 Lions The Best Free Lions Themed Slots Game 101 Lions by Intervision Gaming puts the spotlight on our very own king of the jungle right from your iPad. With stellar imagery that evokes the exquisite beaut...
Scarab IGT Slot Game Free Play Guide Scarab is an online slot machine which comes from the IGT company. If like games like the Cleopatra from IGT or Aristocrats King of the Nile and Queen of the Ni...
Reel King Novomatic Slots Free App Guide Reel King is a fruit themed slot game which was developed by Novomatic who are one of the most popular slot machine companies in Europe. As most other fruit-the...
Dragons Myth Slots by Rabcat Free Play Guide The Dragons Myth iPad compatible slot is powered by Rabcat software platform and features 5 reels and 20 paylines. It takes you on an exciting journey of a brav...
Keystone Kops Free IGT Slots Game Keystone Kops is a game which comes from the IGT company. The slot is a game themed on the famous Keystone Kops movie, a silent movie that aired in the early 19...
Nordic Heroes by IGT Slots Game Guide Nordic Heroes is a unique game developed by IGT, which focuses on fantasy warfare along with having a layout, which closely resembles pokers. The game layout is...
Aristocrat Cashman Fever Hot Chocolate Slot Free... Cashman Fever Hot Chocolate is an online slot machine which comes from the Aristocrat company. The title of this online slot machine does reveal all when it com...
Mystical Mermaid IGT Slots Free Play Guide This is one of IGT’s nautical themed iPad compatible slots so if you like games like Dolphin Treasure or Mermaids Millions then this is your go-to pokie. All th...
Golden Night Bird Free Aristocrat Pokies Game Golden Night Bird is an online slot machine created by the Aristocrat company, it can be played for free fun online or at select casinos for real money exciteme...
108 Heroes Free Microgaming Slot Game Guide 108 Heroes is a Microgaming powered online slot machine that comes with a martial arts theme. Players looking forward to playing game can expect to see a thing ...
Aristocrat Buffalo Free Play Pokies Guide Buffalo is one of the most popular free iPad slots that Aristocrat Gaming has ever developed. Even though it has been around for quite some time in land casinos...
Red Mansions Asian Themed IGT Slots App Guide Red Mansions is an Asian themed slot game from the IGT company. In this pokies game, players are taken on a virtual trip to the East where they get to view Asia...
Shogun of Time Microgaming Slot Game Review Shogun of Time Slot Game Review Shogun for Time is game which comes from the Microgaming company. This slot machine comes with a Japanese fighter theme. Pla...
Heaven & Earth Slots Game Free Play App Heaven & Earth is  a Aristocrat iPad compatible video slot game that depicts the universe along with some magical & mythical creatures of it. Now, these...
Pharaoh’s Fortune Slots by IGT Free Play Guide Pharaoh’s Fortune is one of IGT’s premier classic casino games based on the ancient Egyptian culture, and history of the country featuring the times of sphinx a...
Aristocrat More Chilli Emerald Edition Free Slot... Crank up the heat in this deliciously diabolic Mexicana themed online pokies game from Aristocrat, Australia’s number 1 gaming brand with roots in land based ga...
IGT 777 Sizzling Hot Roll Free Slots This is a game from the good old days but it's still an entertaining slot from IGT plus it's iPad and iPhone compatible. This game is pretty simple, it doesn’t ...
Lightning Box Free Slots Fortune 8 Cat Cats are considered as one of the lucky animals in an ancient history. More so if you are from China. This slot promises to bring good luck to you in the form o...
Tags: China Mystery Slots, Konami free app, Konami free iPad pokies, Konami free iPad slots,