This is yet another animal themed slot game from IGT. This slot mostly features the American bison though there are also other animals namely the wolf and a screwhorn antelope. To get up close and personal with these and other animals, simply start spinning this slot’s 5 reels that come with a massive 1024 ways to win some nice online casino pay-outs on your iPad.

This slot is set against a backdrop of a South American plain with some American bisons walking around themed as the background. 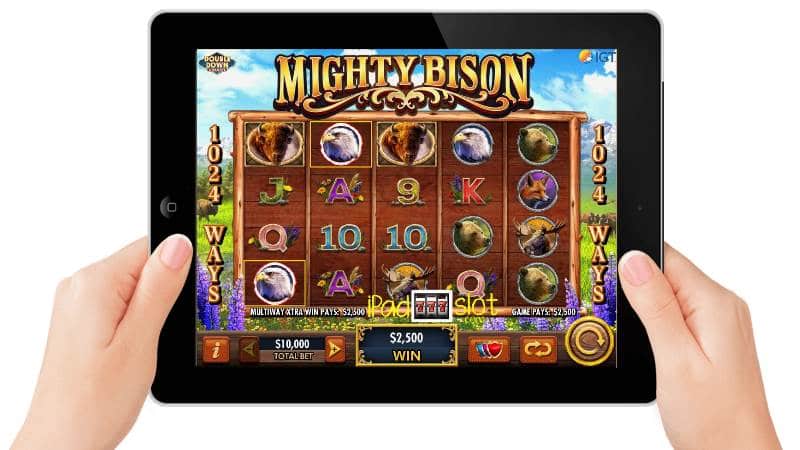 A solid brown colour covers the reels. The symbols on the reels include American bison, wolf, an eagle, and a screw horn antelope. There are also traditional card symbols consisting of number 9, 10, Ace, Jack, Queen and King. 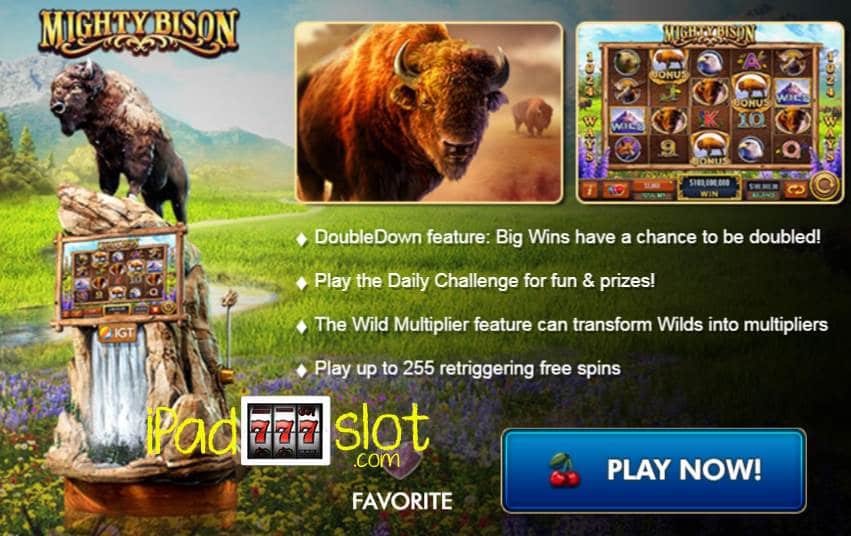 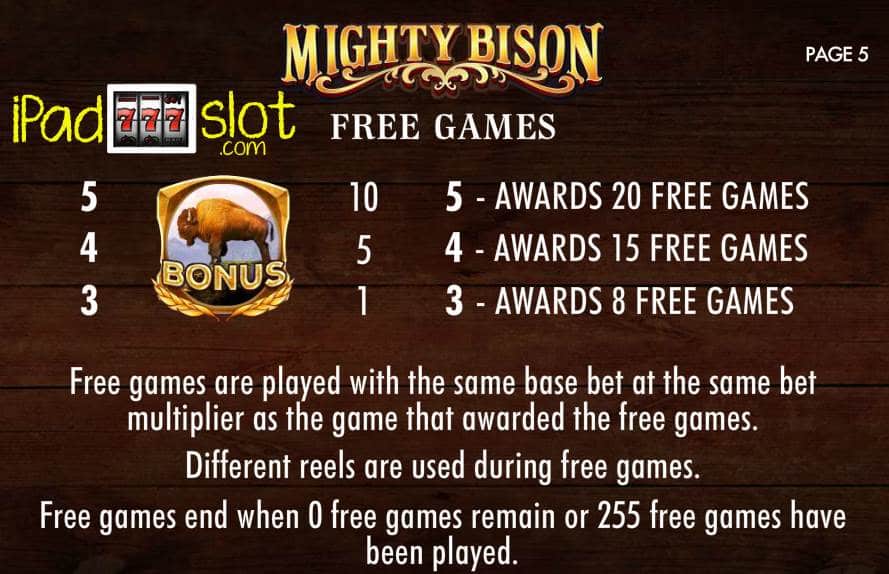 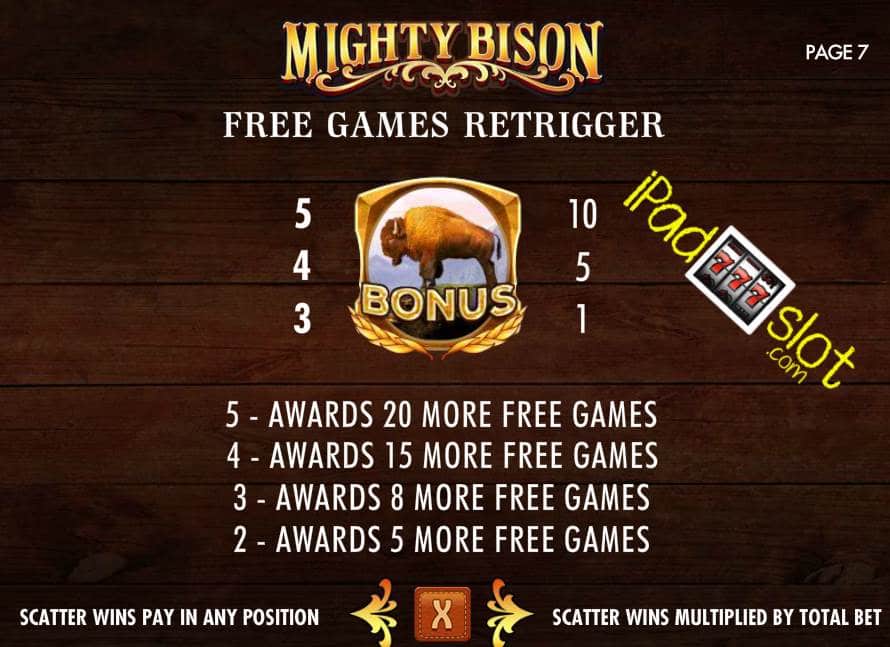 This is an easy iPad slot to play yet it’s very engaging. This game Mighty Bison gets a 7.5 point rating out of 10 points in our guide.

Must Watch Bison Themed Slot Below

Winning Wolf Free Ainsworth Slot Review Winning Wolf, developed and launched by Ainsworth is a 5 reel slot providing players with 100 paylines of excitement. It's another Wolf genre pokies machine, if...
Wonder Woman Gold Free Bally Slot App Some say that the true definition of a person or anything that’s considered great is how it continues to live in the memories of people years after the person i...
Star Lanterns Free IGT Slots Game Guide Star Lanterns referred to as the MegaJackpots Star Lanterns and this is not an exaggeration. IGT gaming company is behind this slot game whose jackpot can run i...
Dungeons and Dragons Treasures of Icewind Dale S... Icewind Dale is a mystical snowy land with hidden treasures. It forms the setting for IGT’s Dungeons and Dragons Treasures of Icewind Dale slot machine. In this...
Midnight Stampede Super Stampede Free Play Guide There is a negative connotation that comes with the word ‘stampede’. Most of the time when this word is used, it is when there is a tragedy of sorts. However, A...
Royal Lotus Online Slot Review A tranquil and blissful garden is one of the most therapeutic places that anyone can go to whenever in need of a stress-free and peaceful time alone. One of the...
Lightning Box Free Slots Fortune 8 Cat Cats are considered as one of the lucky animals in an ancient history. More so if you are from China. This slot promises to bring good luck to you in the form o...
Fat Choy Choy Sun Online Slot There is a saying which states that too much of anything is bad. Ardent believers of this saying state that too much of food can be a bad thing – well, this is ...
Wheres the Gold Pokies Game app Review & Fr... Wheres the gold, by Aristocrat Technologies, is a popular 5 reel, 25 payline iPad pokies game that can be played for free or real money at select casinos with a...
IGT Wishwood Free Slot Game Guide Wishwood is a mythical themed slot game which comes from the IGT company. In this mythical world, players can simply make a wish and whatever they wish for will...
Roaring Riches Ainsworth Slot Free Play Guide Sometimes, all players need before deciding on a slot game to play is just settle for an Ainsworth title as you are always assured of a awesome gaming experienc...
Shogun Land by Habanero Slots Review Shogun Land by Habanero is a cracker iPad slot machine game by this relatively new developer company. The game is based on the Japanese traditional culture, and...
Wild Ameri’Coins Free Slots Game Guide When it comes to slot games, different players have different reasons as to why they play. Some simply love the entertainment element which they get from spinni...
Rainbow Riches Drops of Gold Free Barcrest Slot SG Interactive continues dropping some captivating titles in the Rainbow Riches slot series and this time around, SG Interactive has released Rainbow Riches Dro...
Mermaid Queen SG Interactive App Growing up, many of us have heard tales about mermaids. Though many believe that mermaids actually do exist, only a handful testify that they have seen mermaids...
Wild Tooth Free Slots Game Guide Wild Tooth is an animal themed slot game from Aristocrat. The game takes the player right inside a huge forest with some tall mountains. For spotting animals of...
Aristocrat Polynesian Pearl Free Slots Guide Are you looking forward to try out a fun tropical themed game? Well, if yes, then this free iPad slot game will be quite apt for you. "Polynesian Pearl" is a...
Triple Cash Wheel Bally Free Slot App Retro themed old school slots are a favourite of many casino players. In this slot game, Bally decided to give fans of retro-themed slots something different th...
Blazing Goddess Lighting Box Games Free App Guid... Blazing Goddess is an online slot machine which comes from the Lightning Box stable of awesome pokies. This online slot machine comes with a Polynesian theme as...
Sumatran Storm Slots Game Guide This is one of many IGT’s animal-themed slots. Sumatra is an island found near Indonesia where one can find a lot of tigers and other wild animals. The objectiv...
Tags: IGT free app, IGT free iPad pokies, IGT free iPad slots, Mighty Bison Free Slots,