Mighty Cash Sacred Scarab is an Egyptian themed online pokies machine from Aristocrat. The game comes with an adventure theme as players are taken on a voyage of discovery to the lost world in ancient Egypt. If you like the Queen of the Nile pokies machine then this is your go-to game.

To start one’s adventure on this pokies machine game, just set in motion the game’s five reels and three rolls of fun. Mighty Cash Sacred Scarab is mobile compatible meaning that players can access and play the game on their mobile devices like an iPad or Android. 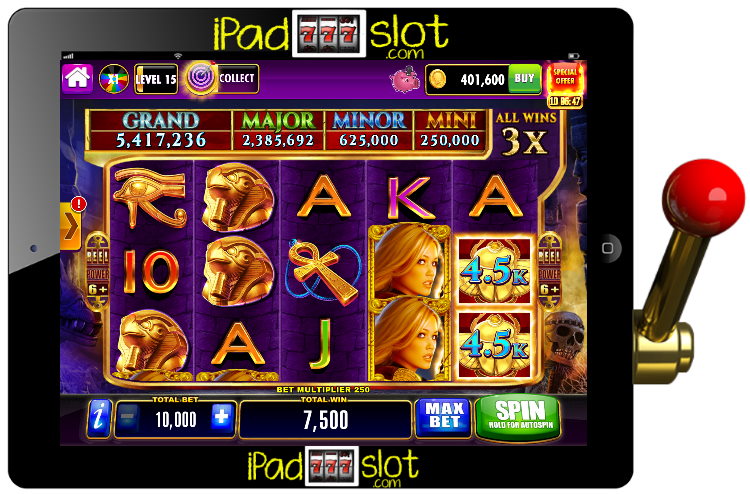 ** The Mighty Cash Sacred Scarab from Aristocrat and similar style slot machines may be on our site to play for free or real casino money jackpots on an iPad, iPhone, Android or Windows gadgets from our guides – Just take a peek at our FREE games page here. **

The background of this slot game depicts the lost city with some skulls showing in a distance as well as a burning building. A purple colour covers the reel section.

When spinning the reels of Mighty Cash Sacred Scarab, players will find the following symbols on the reels: a lady, golden elephant, golden rabbit, a cross, eye of Horus, and traditional poker symbols. 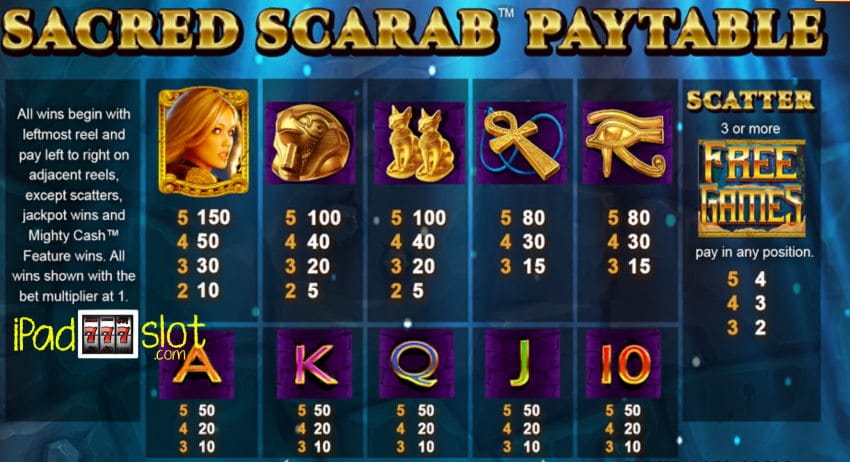 Mighty Cash Sacred Scarab is an interesting and adventurous slot game to play for free at the Cashman Casino. Out of a 10 point rating, this slot game gets an 8.5 point rating.

Aristocrat The Amazing Race Free Slots App Guide Television is littered with hundreds of reality and quiz style genre programs. Some appeal only to a particular audience be it the young, the old, young males, ...
Sacred Guardians Slots Free Play Guide Sacred Guardians is a awesome animal themed slot game from Aristocrat. This is a 4 level progressive game which features some cute animals on the reels. Anyone ...
The Big Easy IGT Slot Game & Guide Americans will have an easy time recognising what this slot game is based upon. However, to impart non-Americans with knowledge on what they may not have known,...
Mr. Cashman Jewel of the Enchantress Free Aristo... Mr. Cashman Jewel of the Enchantress is a ripper (great) pokies game app released by the well-known Aussie based slots manufacturer Aristocrat. What’s appealing...
Aristocrat Moon Drifter Free Play Pokies Guide This iPad compatible slot game is loosely based around Clint Eastwood. It features an innovative game play, extended reels, a special bonus round, and much more...
Mighty Cash Double Up Infinite Jade Free Slot Mighty Cash Double Up Infinite Jade comes from the Aristocrat company. This free pokies game is one of the best that players will find in the Mighty Cash series...
Golden Wins Free AGS Slot Game Guide This very unique AGS slot game goes by the name Golden Wins and it comes with an oriental theme with heaps of firecracker visuals, it's exciting and fun to play...
Long Teng Hu Xiao Slots Game Review Anyone who loves reading mystery books will know that the greatest collection of mystery books all come from Asia. Long Teng Hu Xiao is another mystery from the...
Dragon Emperor Free Play Aristocrat Slots Guide Are you ready to embark an exclusive gaming adventure by exploring the hidden treasures of the mysterious Dragon Emperor? Well, if yes, then the Aristocrat "Dra...
Aristocrat Monkey King Free Pokies Game Guide Linked to the Lucky Fortune link progressive jackpot, you are bound to want to unlock one of the special features which give you the opportunity to win the ever...
Genies Riches By Aristocrat Free Play Guide If you are a slot game lover who often prefers to try out Aristocrat iPad games, then Genies Riches will be a perfect gaming option for you to have a crack on. ...
Jungle Rush Aristocrat Slot Free Play Guide Jungle Rush is a must play online slot machine which comes from the Aristocrat range of awesome free online pokies games. Quick Start Guide Jungle Rush Free Po...
Nautical Treasures Slots Free Play Guide Nautical Treasures from Aristocrat is a iPad slot game with an aquatic theme focused on ocean discovery and adventure. The game takes one deep into the sea wher...
Aristocrat Buffalo Free Play Pokies Guide Buffalo is one of the most popular free iPad slots that Aristocrat Gaming has ever developed. Even though it has been around for quite some time in land casinos...
Werewolf Wild Aristocrat Free Slots App Werewolf Wild is an iPad slot game developed by Aristocrat and you can play it for free fun or real money at several online casinos. It features an werewolf the...
Aristocrat Heart of Vegas Free Slots Game Guide Vegas fun comes in all shapes and sizes but you can always envision the money hub as glitz, glam and 24/7 fun! The Heart of Vegas slot game depicts all of this ...
Magic Flower Deluxe Free Aristocrat Pokies Game Magic Flower Deluxe is a online slot machine from the Aristocrat company. This game comes with an oriental theme of an Asian village setting. The Magic Flowe...
Fu Nan Fu Nu Free AGS Slot Game Guide The oriental theme is one of the most popular genres among slots players. Its crystal clear to see the reason why this is the case as the oriental theme allows ...
Lock it Link Nightlife Free WMS Slots Game App G... Online slot games are a favorite among casino lovers all over the world, what could be better than playing casino slots for real cash or free fun on your iPad, ...
Aristocrat Panda Magic Free Slots Game Panda Magic is an online slot machine from Aristocrat which comes with an animal theme. As can be deduced from the slot’s title, the animal theme in Panda Magic...
Tags: Aristocrat android slots free, Aristocrat free iPad slots, Aristocrat free pokies, Aristocrat iOS free slot app, Aristocrat ipad pokies free, Aristocrat iphone pokies free, Aristocrat iphone slot free, Aristocrat pokies app free, Aristocrat slot app free, Aristocrat social pokies, Aristocrat social slots. Aristocrat android pokies free, Aussie free pokies, Aussie pokies, Mighty Cash Sacred Scarab,