Monopoly On The Money is a game which comes from the SG Interactive Barcrest Studio. This is a creative online slot as it gives players the opportunity to play two games at once i.e. the game of monopoly as well as some casino gaming fun mixed in.

This game comes with five reels and 10 paylines. As this slot is mobile compatible, it means that players can enjoy Monopoly On The Money on their mobile devices provided they run on either iOS or Android operating systems and best of all no apps are needed to play this Barcrest slot game.

** The Monopoly On The Money Barcrest slot game may be available to play for free on your iPad, iPhone, Android, Windows device, PC or Mac. Just take a peek at our FREE GAMES PAGE HERE. ** 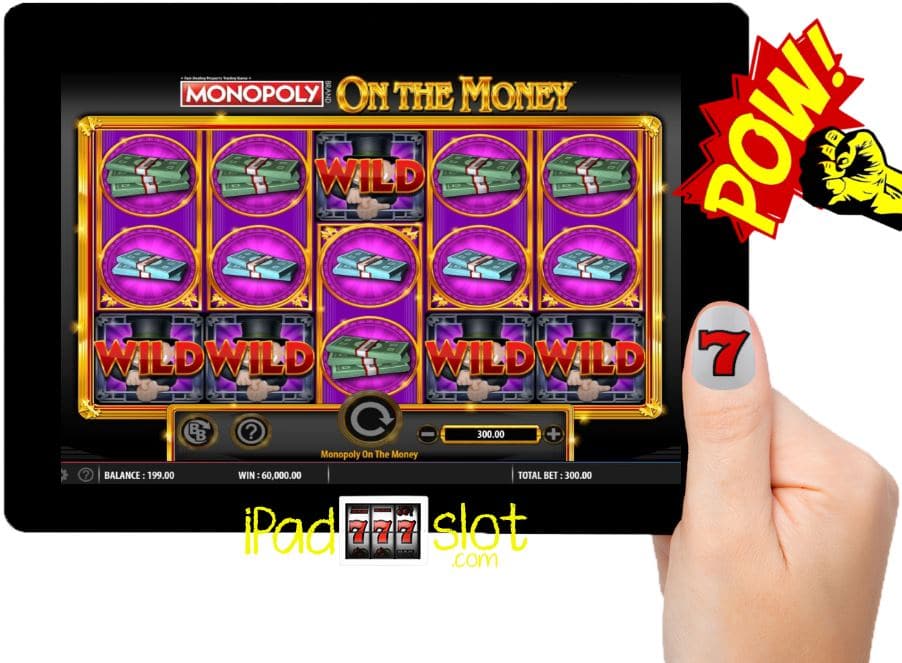 The beige wall provides the background to this game. The reel section is covered by a red wall in the typical Monopoly style of things.

When spinning Monopoly On The Money’s reels, players will find the following symbols: the Monopoly Money game logo, Mr Monopoly’s hat, a tiger and a cat, stakes of cash (carrying multiplier values) and traditional card symbols. 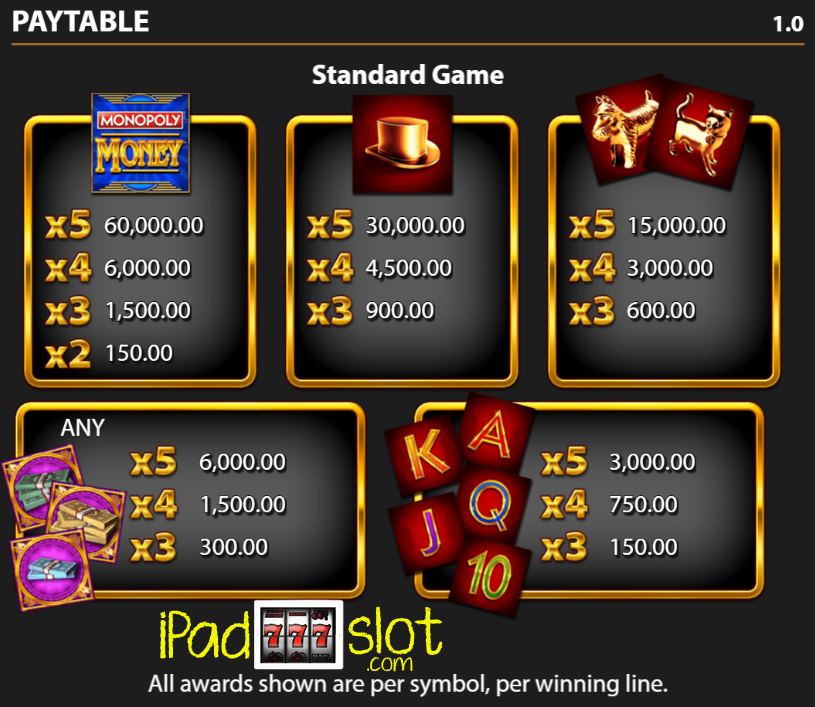 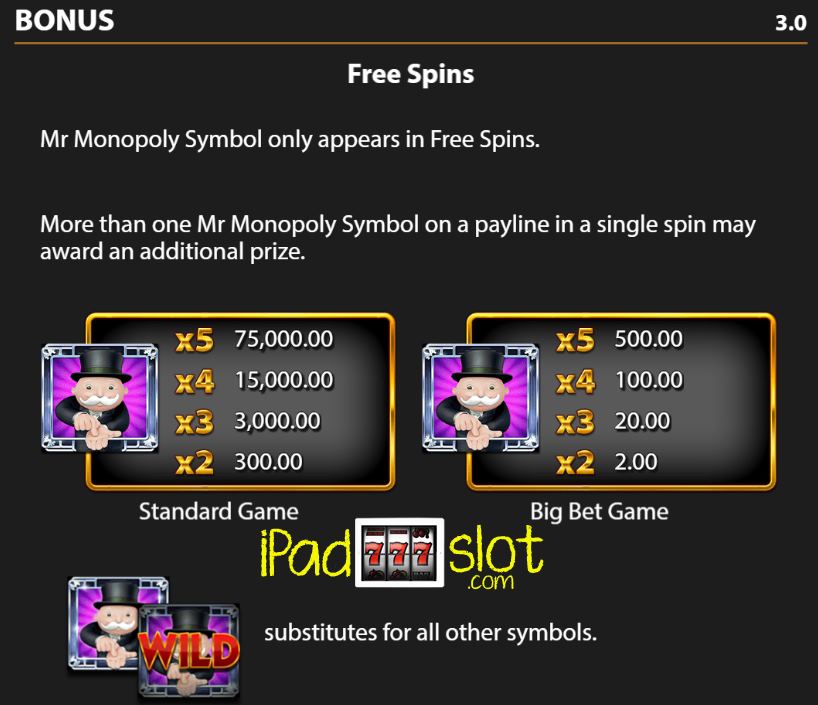 The player has the option to gamble the free spins that he wins after landing three or more GO scatter symbols. If the player decides to gamble, he stands to double the number of free spins he is awarded. To enable this feature, the player simply needs to enable the red Gamble button. 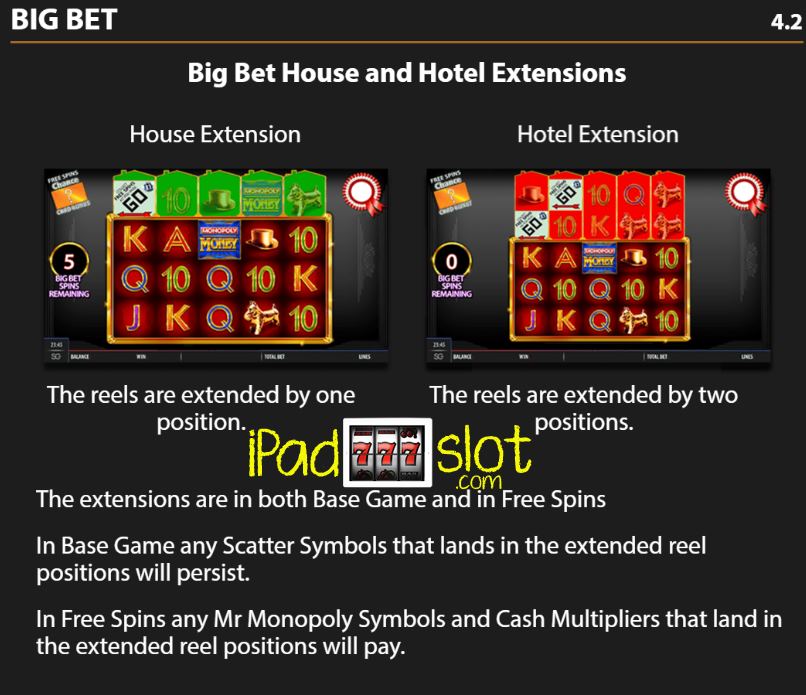 When you get the Free Spins bonus watch out for the cash multipliers for some big pay-outs. Make sure you play the Big Bet for even more wins, the Community Chest Card bonus delivers extra chances for more Free Spins and even bigger winnings.

Monopoly On The Money is a cracker medium volatility iPad slot game from SG Interactive which comes with numerous bonus rounds that your gonna love. The RTP of this slot range from 94.00 percent to 97.75 percent. This slot game gets a 9 point rating out of 10 points in our Barcrest slot reviews. 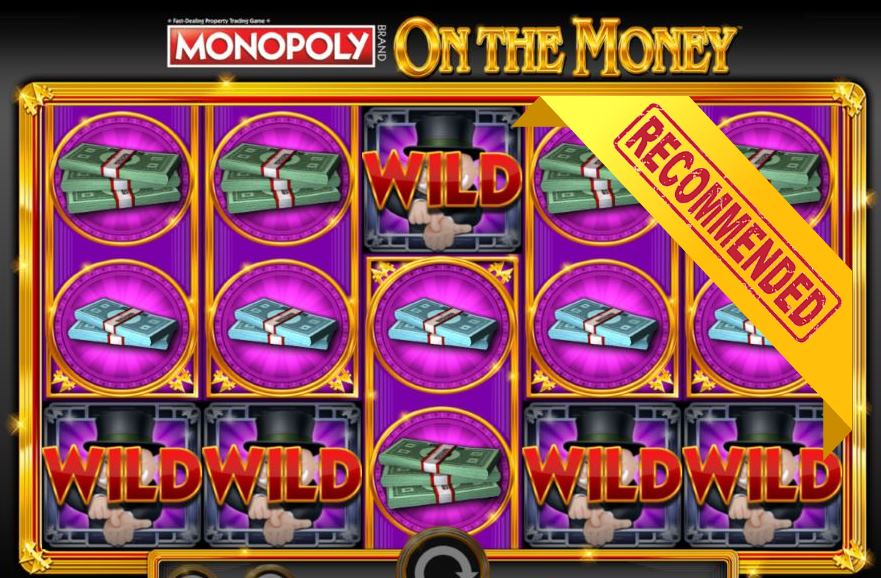 Novomatic Free Slots Game Tales of Darkness Luna... Tales of Darkness: Lunar Eclipse is a horror-themed online slot machine that comes from the Novomatic company that has created several games in this genre like ...
Natural Powers by IGT Free Slots Guide The iPad compatible slot game Natural Powers from IGT is a comic-themed type slot game. It possesses 5 reels and 40 pay lines. The game is based on four element...
Dragons and Pearls Online Slot Review Dragons and Pearls is a cracker Oriental themed casino game by GameArt, which consists of reels of 5 and rows of 3 with 25 paylines. Slot layout One can expec...
Choy Sun Doa Slots Free Play Guide Choy Sun Doa features to be the finest slots that is developed by Aristocrat with Asian flavours in the theme. The name of this game literally means "God of Pro...
Lightning Box Angel’s Touch Free Slot Guide The dream of many is to wine and dine with angels when they finally depart the earth. This dream is inspired by the ‘tales’ of how wonderful angels are so it ma...
The Huntress Aristocrat Slot Free Play Guide The Huntress is an free online slot machine which comes from the Aristocrat studio. Just as can be deduced from the title, this online slot machine does come wi...
Aristocrat Goblins Gold Free Slots Game The title of this Aristocrat slot game does reveal what the players are going to find when they start playing this game. On one hand, the slot has a magic theme...
Wonder 4 Special Edition Free Slots Game App Gui... Buy one, get one free. Have you ever heard of this promotion? My guess is, yes you have (and probably you have taken advantage of it and bought two things for t...
Aristocrat Mystical Sands Free Slots App Guide Mystical Sands is an Egyptian themed iPad compatible slot machine game app from the Aristocrat stable. You may be wondering how the title relates to the game’s ...
Elephant King Slots by IGT Game Guide Elephant King is a awesome game made by IGT and is good to play on your iPad or iPhone from our casino guides. It was released in about 2017 ish' for online and...
Golden Knight Free High 5 Games Slots Golden Knight is a Royal themed online slot machine that comes from the High 5 Games company. Players looking to enjoy the game ought to know that they will be ...
Yokozuna Clash Free Slot Review The Yokozuna Clash Slot is set to be the ultimate battle of sumo wrestlers on the reels, with the lucrative chance of winning some handsome rewards. It is set i...
Kings Honour Barcrest Free Pokies App Guide Kings Honour is a colossal Barcrest Studio iPad and iPhone compatible pokies game from SG Interactive, it comes with a regal theme and a split reel feature (5x4...
Weird, Wicked & Wild Free Play Pokies Guide Weird, Wicked and Wild is a free online pokies machine which comes from the Aristocrat company. The title of this online slot does by all means gives the player...
BigWin Blast IGT Free Slot App Guide BigWin Blast is an IGT powered slot game which comes with a classical theme style. This simply means that the symbols which players will encounter on the reels ...
Deco Diamonds Slot Game Guide Deco Diamonds Slot Game Review Deco Diamonds is a game which comes from Microgaming. As can be deduced from the title, this slot comes with a diamond theme hen...
Long Teng Hu Xiao Slots Game Review Anyone who loves reading mystery books will know that the greatest collection of mystery books all come from Asia. Long Teng Hu Xiao is another mystery from the...
Dancing in Rio Williams Free Android Slots App Brazil is known for many things but there are actually two things that have put her on the global map. First, there is soccer, Brazil is known as the home of so...
Faeries Fortune iPad Slots How to Play Guide Faeries Fortune is an iPad slot game that has been developed by Big Time Gaming and it offers an attractive fairytale theme that will draw in many punters. Play...
The $100,000 Pyramid Free IGT Slot Game Guide The $100,000 Pyramid online slot machine is a game from the IGT company and was first released for land casino players in 2001. This online slot machine is a ga...
Tags: Barcrest free app, Barcrest free iPad pokies, Barcrest free iPad slots, Monopoly iPad slot app, Monopoly On The Money slots, Monopoly slot app,