There are a lot of slot games with Oriental themes that have been published by Aristocrat, and Moon Festival certainly calls to mind slot games like 50 Dragons and Choy Sun Doa, to mention just a few. Like 50 Dragons, it also makes use of 5×4 video reel setup that is very popular with casino pokies players in Australia and Las Vegas.

Nonetheless, it does stand out with its inimitably Asian symbols, whose mysticism and strong connection to good fortune only serve to spur any player to aim for high winnings and have fun at the same time.

There are a total of 50 paylines in Moon Festival. You have no control over the number of lines you wish to bet on, as you can only change your total bet. The game readily reveals the amount that you bet per line as well. All winning combinations are from left to right only, and are multiplied by the line bet, with the exception of the scatter symbol. 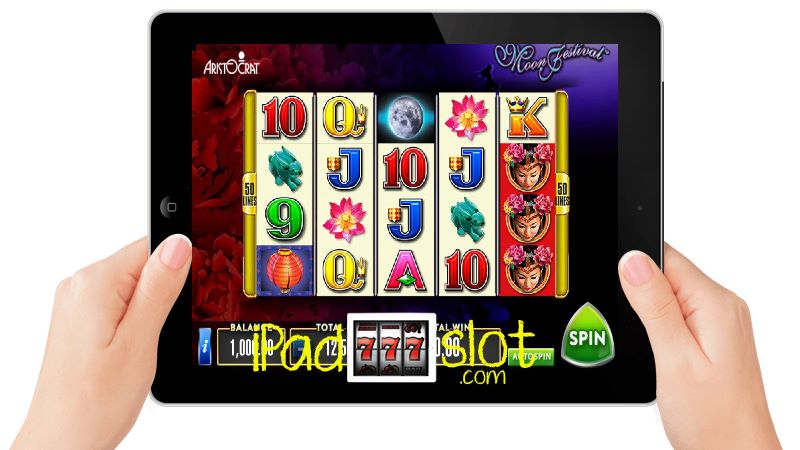 Symbols in The Game 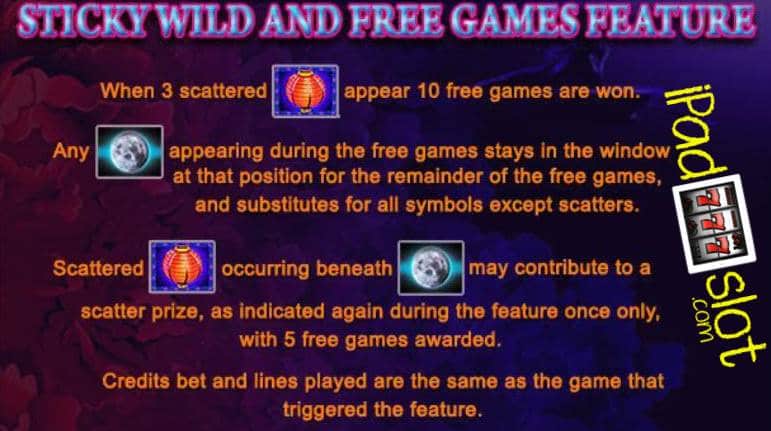 We give Moon Festival 7 from 10 points, it’s good but no great. Many other Aristocrat iPad slots are much better that this game to be honest. You can play this slot for free at Heart of Vegas or for real money at out suggested Aristocrat iPad casinos.

Diamond Empire Microgaming Slot Game Guide Diamond Empire is a classic online slot machine that comes from the Microgaming company. As is the norm with classic slots, players looking to play Diamond Empi...
Wolf Rising By IGT Slots Free Play Review Wolf Rising is a standard IGT creation that's been about for over 15 years now, the free iPad slot portrays a beautiful layout and standardized gaming platform ...
Mega Boy iSoftBet Slots Guide There is competition between slots developers to release different casino slots. Granted, slots developers are exploring all available options to bring out casi...
Wonder 4 Special Edition Free Slots Game App Gui... Buy one, get one free. Have you ever heard of this promotion? My guess is, yes you have (and probably you have taken advantage of it and bought two things for t...
Lightning Box Free Slots Fortune 8 Cat Cats are considered as one of the lucky animals in an ancient history. More so if you are from China. This slot promises to bring good luck to you in the form o...
Wild Splash Slots by Aristocrat Free Play Guide If you are an avid fan of Aristocrat iPad slot games and you're also looking to try out a simple yet elegant game, then "Wild Splash" will be an appropriate cho...
Celestial King Free Bally Slots App Guide Celestial King is an SG Interactive powered slot game from Bally which comes with five reels and 25 paylines. Designed with an Asian theme, playing this game yo...
Jinfu Long Online Slot Review There is thousands of oriental themed slots in the market, there are a few that manage to get everything right. One such game that makes the grade is the Playte...
Ellen DeGeneres Show Have a Little Fun Today Fre... After acquiring the exclusive rights to develop Ellen DeGeneres branded slots, IGT moved fast to develop as many Ellen themed slots as possible and this is one ...
Aristocrat Mighty Cash Double Up Endless Diamond... Mighty Cash Double Up Endless Diamonds is a slot in Aristocrat’s widely revered Mighty Cash series of free pokies that you can play online or for real money at ...
Pacific Paradise IGT Free Mobile Slot Review The underwater world is a world of aquamarine life and just like the way of life at the bottom of the ocean, IGT has recreated an video slots game that features...
BigWin Blast IGT Free Slot App Guide BigWin Blast is an IGT powered slot game which comes with a classical theme style. This simply means that the symbols which players will encounter on the reels ...
Matsuri Play’n Go Free Slots App Play ‘n Go brings to our screens all the festivities Japanese people enjoy in their land of the rising sun. Matsuri is the Japanese term for festival; once you ...
Gold & Dragon Free Slots Game Guide Gold & Dragon is an oriental themed slot game from IGT. The game is one of the newly released progressive games from the IGT stable which comes with four pr...
Star Lanterns Free IGT Slots Game Guide Star Lanterns referred to as the MegaJackpots Star Lanterns and this is not an exaggeration. IGT gaming company is behind this slot game whose jackpot can run i...
Weird, Wicked & Wild Free Play Pokies Guide Weird, Wicked and Wild is a free online pokies machine which comes from the Aristocrat company. The title of this online slot does by all means gives the player...
Mustang Money Free Ainsworth Slot Game & Gu... Mustang Money transports players to the western outback, to a time where horses ran wild and free and you could appreciate the sunset without your phone beeping...
Caribbean Kitty by IGT Slots Game Guide Caribbean Kitty is an animal themed slot game from IGT. This progressive slot game primarily focuses on cats, therefore, when spinning the reels of this slot, p...
Spellcast NetEnt Free Slot Game Review Spellcast is a popular game widely present in online casinos. This is the creation of NetEnt. This game has 5-reels, 3-rows, 20-pay lines and a unique feature. ...
Mega Hearts Free Slots App by Ainsworth Mega Hearts is a romance-themed iOS compatible slot app from the Ainsworth stable of amazing games. This pokie comes with two incredible progressive jackpots wh...
Tags: Aristocrat free iPad pokies, Aristocrat free iPad slots, Aristocrat Free Slot App Article Tags, Moon Festival Free iPad slots,