Motorhead is a branded slot game which comes from one of the world’s most renowned game developers i.e. NETENT. This online slot machine is based on the popular rock band Motorhead fronted by Lemmy.

Everything about this slot is all pure ‘rock’ from the symbols that players will encounter while spinning the game’s five reels to the background sounds which will keep players captivated as they try their luck on this 76 payline slot. Without wasting much time, let’s jump into the full review to see what players can expect when they decide to play the Motorhead iPad, iPhone and Android slot game for free fun or real money. 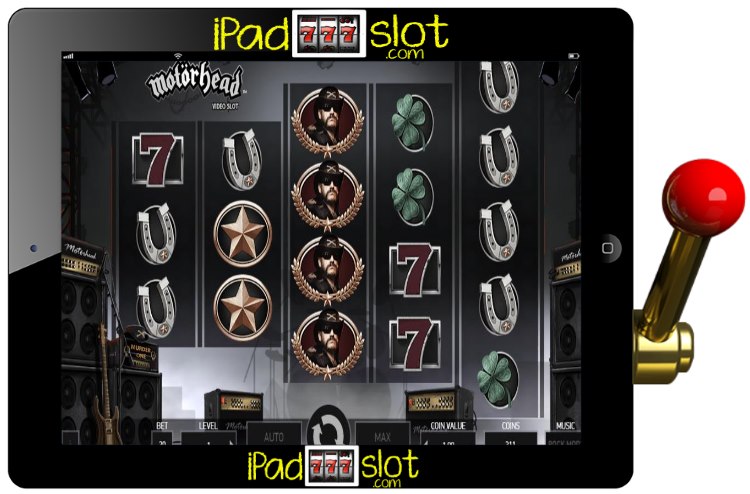 This online slot machine is set against a backdrop of a well-prepared stage (with musical instruments already laid on the ground) acting as the background. The reel section is covered by a light black colour.

The symbols that players will find on the reels include Lemmy, a star icon, a bell, lucky sevens, horseshoe, apples and four-leaf clovers.

Landing three scatter symbols will help the player to trigger the Free Spins Feature. The player is awarded 10 free games.

About Motorhead the Band

The group were considered an entrée of sorts to the New Wave of British Heavy Metal bands era, but Lemmy considered their music as just “rock and roll”.

Over the years Motörhead produced 23 studio albums, ten live album recordings, twelve compilation albums and 5 awesome EPs. The albums Overkill, Bomber, Ace of Spades and my personal favourite No Sleep ’til Hammersmith, were some of the best iconic records that they released.

Sadly, Lemmy died in December 2015 which ended the bands 40 years in the music business.

Motorhead is a must play mobile and tablet game for all lovers of rock and roll themed slot games. Out of a 10 point rating, this slot game gets an 8.5 point rating in our NETENT slot reviews.

** It’s your lucky day today as the NETENT Motorhead Slot is available to play for free on your iPad, iPhone, Android, Windows device with or without an app, or on your PC or Mac. Just take a peek at our FREE games page here. **

South Park Free Slot Game App for iOS or Android Most of the time when an animated sitcom is released, its meant for the younger generation. However, this is the exact opposite of the South Park TV show. South Park is an animated...
NETENT Narcos Free Slots Game Guide Netflix lovers will easily recognize the name ‘Narcos’. This is because Narcos is a highly popular series that runs on the Netflix streaming platform and lovers of action, adventur...
NETENT Guns N’ Roses Free Slots Game Guide Guns N' Roses is a Net Entertainment powered branded online slot machine that is awesome to enjoy on ipad, iPhone or Android devices. The game pays tribute to the popular rock band...
NETENT Dazzle Me Pokies Game Guide Dazzle Me is a gem themed online slot powered by one of the leading game developers in the world, that is, Net Entertainment. The game comes with a unique reel set that makes it an...
NETENT Aloha Cluster Pays Free Slots Game Guide Aloha Cluster Pays is powered by Net Entertainment, a leading entity in the online gaming industry. This online slot machine comes with a tropical theme that is chocked full of col...
Jimi Hendrix Free NETENT Slots Game App Guide In the past, software developers used to release basic music themed games. However, over time, they began to feel the dissatisfaction from players hence they decided to up their ga...
NETENT Jumanji Free Slots Game Guide Jumanji is a branded online slot machine that comes from the leading game developer, that is, Net Entertainment or NETENT as it's also known as. More bonuses than you can ever have...
Preview of the Flowers NETENT iPad Slots Game With Flowers, iPad players will enjoy a flowery themed game that is packed with features. The game from NETENT is fun in free play and a real money version and it has 30 eye candy ...
Top 10 Action & Adventure Free NETENT iOS or ... Games, in general, are soothing and at times therapeutic thus they are great for relaxation and sometimes you might even win a few bucks. When talking about soothing, the first tho...
Tags: Motorhead, Music themed slot, NETENT android slots free, NETENT free pokies, NETENT iOS free slot app, NETENT ipad pokies free, NETENT iPad slot, NETENT iPad slots free, NETENT iphone pokies free, NETENT iphone slot free, NETENT pokies app free, NETENT slot app, NETENT slot app free, NETENT social pokies, NETENT social slots. NETENT android pokies free,