Nautical Treasures from Aristocrat is a iPad slot game with an aquatic theme focused on ocean discovery and adventure. The game takes one deep into the sea where the player gets to see all the different aquatic wildlife and also other organisms that live in water. The player can also get a telescope and oxygen kit that will make exploring the sea easier. To start one’s adventure in this slot game, the player simply needs to set in motion the game’s five reels.

The background of this slot game showcases blue waters from the oceans sea. The reels of the game are a tad transparent making it possible for the player to see the background graphics while spinning the reels. 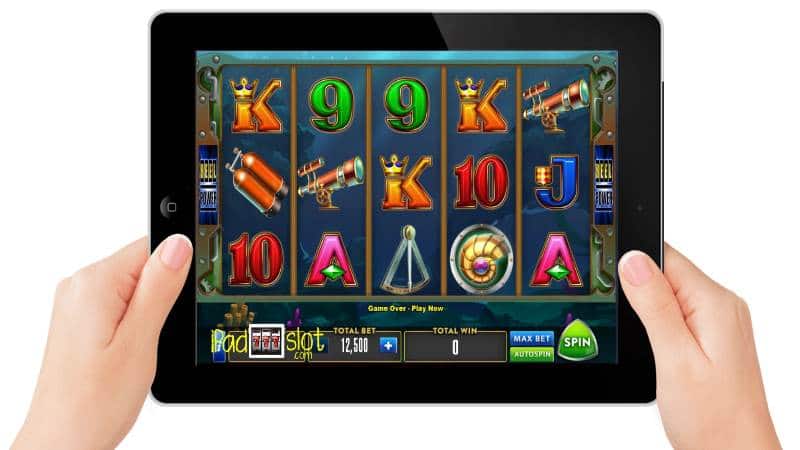 On the reels, players will find the following symbols: water mask, telescope, oxygen kit, and a silver object. There are also some traditional poker symbols.

This is one of many aquatic themed slots from Aristocrat which game lovers have to try owing to its absolving game play and also a lucrative bonus round which can be enjoyed at Heart of Vegas. The slot gets an 8 point rating out of 10 points in our gaming guide.

Another must play “Treasures” genre Aristocrat slot game below

Novomatic Jungle Explorer Free Slots Game Guide Jungle Explorer powered by Novomatic is an online slot machine that comes with an adventure theme. Players playing this game will be virtually transported to a ...
NYX Druidess Gold iPad Pokie Free Play Guide The NYX Celtic fantasy-themed Druidess Gold iPad slot features the titular druidess plus a host of other motifs of the pagan faith. It’s for this reason why if ...
EGT Gold Dust Free iPad Pokies Guide The Gold Dust online slot takes players to the Wild West, when the hunt for gold was at its height and prospectors can turn into instant millionaires. If you li...
Red Hot Wild Free Barcrest Slots Guide In recent times, 3 reel slots have lost their popularity a bit thanks to all the fancy games in the market with all the wiz bang graphics. However, SG Interacti...
Temple of Gold Slot Review and Free Play Guide There are hundreds of treasure hunting slots online with a gold theme, so if you like the Where's the Gold by Aristocrat or the Gold Factory game from Microgami...
Dolphin Gold Lightning Box Free Pokies Dolphin Gold is an online slot machine which comes from the Lightning Box Games company based in Australia. This aquatic themed pokies machine comes with an und...
Rainbow Riches Reels of Gold Free Slot Guide The title of this slot game is enough on its own to lure players. Odds are, no one would want to miss a chance of spinning reels crafted out of gold! The beauty...
Thai Sunrise by NextGen Gaming Slots Guide Thai Sunrise by NextGen Gaming is a virtual journey to Thailand and allows the players to witness some of the most regular scenes to be found in a Thai city lik...
Blazing Goddess Lighting Box Games Free App Guid... Blazing Goddess is an online slot machine which comes from the Lightning Box stable of awesome pokies. This online slot machine comes with a Polynesian theme as...
Cash Coaster IGT Slots Free Play & Review The Cash Coaster Slot gives you a unique day at the amusement park, this IGT slot game is inspired by an old wooden styles coasters which are among the few rema...
IGT Wishwood Free Slot Game Guide Wishwood is a mythical themed slot game which comes from the IGT company. In this mythical world, players can simply make a wish and whatever they wish for will...
Aristocrat Long Horn Deluxe Free Play Pokies Gam... Long Horn Deluxe is an free pokies machine from Aristocrat. The game comes with an animal theme which is themed in favour of those placid long-horned animals kn...
Rainbow Riches Free Spins Barcrest App The ‘Rainbow Riches’ series is one of the most popular slot series to come from the SG Interactive stable of Barcrest games. Adding on to the vast number of tit...
Mild Rockers Lightning Box Free Slot Game Guide Mild Rockers is an iPad compatible slot which comes from the Lightning Box stable. This game comes with a clubbing theme meaning that as players spin the reels,...
Crazy Goose Free IGT Slot Review In this comical spin on animated animals, you are given the opportunity to explore the farm life over 5 reels and 100 ways to win big. The vast amount of paylin...
Aristocrat Cashman Fever Hot Chocolate Slot Free... Cashman Fever Hot Chocolate is an online slot machine which comes from the Aristocrat company. The title of this online slot machine does reveal all when it com...
More Hearts Free Play Information "More Hearts" by Aristocrat features an impressive game play that comes with miscellaneous game symbols, such as gemstones, lions, birds, & other wild anima...
Fire Horse IGT Game Review This is an equine-themed slot game from IGT. In addition to the horses, this slot also features some Chinese zodiac signs so you rest assured that your adventur...
Amazon Temple Free Slots Game Review The Amazon from tales we hear from those who had the privilege to visit the place is a huge jungle with densely populated trees, evergreen vegetation and also a...
Wonder 4 By Aristocrat Free Play Game Guide "Wonder 4" is an excellent combination of four cracker slot games what could get better! play the iconic Pompeii, Wild Splash, everyone's favourite Buffalo and ...
Tags: Aristocrat free iPad pokies, Aristocrat free iPad slots, Aristocrat Free Slot App Article Tags, Nautical Treasures Free slots,