Dazzle Me is a gem themed online slot powered by one of the leading game developers in the world, that is, Net Entertainment. The game comes with a unique reel set that makes it an entertaining proposition for players who are fond of something very unique. If you like the Davinci Diamonds slot then this is your go-to game.

Players looking to play the game simply need to set in motion the game’s five reels that come with 76 paylines. The game can be played both on a desktop as well as on mobile gadgets. 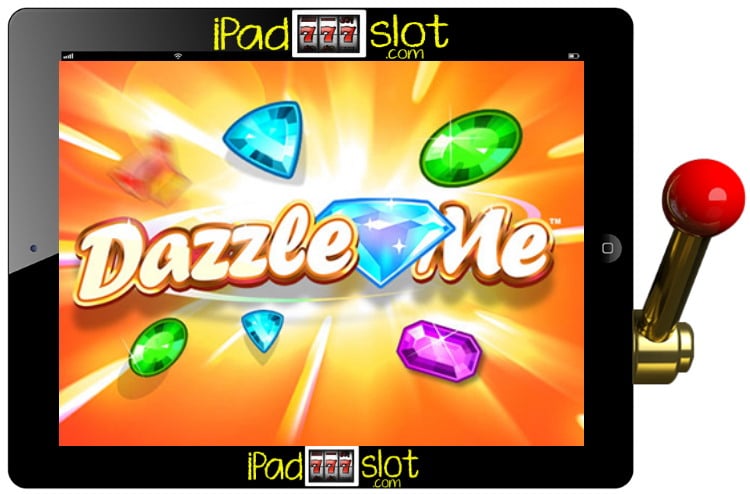 Blue skies provide the background graphics to this online slot machine. The reel section is covered with a white colour.

When spinning the five reels of Dazzle Me slot, players will encounter the following symbols on the reels: a blue diamond, the FREE SPINS icon, lucky sevens, golden bell, red gem, purple gem, green gem, and a blue gem.

Dazzle Me is quite a dazzling pokies game both when playing in the base game or when playing in one of the bonus rounds. The game gets an 8.6 point rating out of 10 points in our free NETENT slot game guides for mobile players. 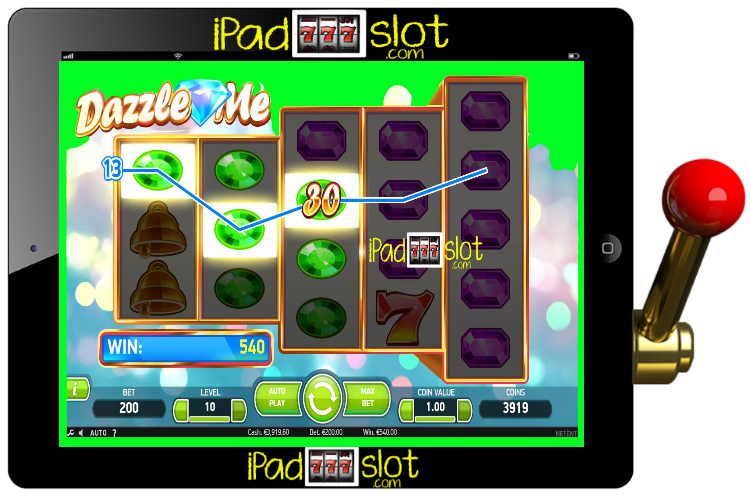 ** Please NOTE – It’s probably your lucky day as the Dazzle Me NETENT slot game may be available to enjoy online for free or real money casino action on your iPad, iPhone, Android, Windows device with or without an app, or on your PC or Mac. Just take a look at our FREE games page here. **

Goldify IGT Slots Game Review & Guide This is a Greek-themed iPad slot game from IGT that's pretty awesome overall. Goldify is based on the tale of King Midas who is widely believed to have been cur...
The Eva Show in Vegas Free IGT Slot Game Guide The Eva Show in Vegas is a online slot machine which comes from the IGT company. Vegas fans will find game fun as it does feature most of the common themes from...
IGT 777 Sizzling Hot Roll Free Slots This is a game from the good old days but it's still an entertaining slot from IGT plus it's iPad and iPhone compatible. This game is pretty simple, it doesn’t ...
5 Dragons Rapid Free Slots Game Review From bedtime stories that our parents or guardians used to tell us when we were young, stories with mythical creatures commonly known as dragons used to pop up ...
Novomatic Free Slots Game Tales of Darkness Luna... Tales of Darkness: Lunar Eclipse is a horror-themed online slot machine that comes from the Novomatic company that has created several games in this genre like ...
Aristocrat Peacock Riches Free Slot Game Guide If beauty, the orient and money make the perfect combination, then Aristocrat has developed the perfect 5 reeled video slots game for you to play for free onlin...
Deco Diamonds Slot Game Guide Deco Diamonds Slot Game Review Deco Diamonds is a game which comes from Microgaming. As can be deduced from the title, this slot comes with a diamond theme hen...
Texas Tea Free Online Slot Game Review The title of this IGT slot game will mean different things to players from different regions. For slot players not resident in Texas or surrounding areas, the h...
Faust Novomatic Slots Game App Faust is a themed iPad slot game on a German legend who made a deal with the Devil, how cool is that! it's powered by Novomatic so you know it's gonna be great....
Wolf Moon by Aristocrat Free Slots app If you are ready to have a good time gaming and seeing abundant wildlife in reservation then it’s an ideal time to spin the reels of Wolf Moon. The game is slot...
Rocket Fellas Inc Free Slot Game Guide Rocket Fellas Inc Review Rocket Fellas Inc is an adventurous slot created by the game studio Thunderkick. It is a high-variance slot game with 5 reels, four ro...
Mad Cubes 25 Slots Game Guide Mad Cubes 25 is a fun slot machine game by Zeus Play, which gives the players one of the unique feel of playing just with dice combinations. With 25 paylines an...
IGT Wheel Of Fortune Ultra 5 Reels Free Slots Wheel of Fortune Ultra 5 Reels is an IGT creation of another big wheel genre iPad slot game. This game provides a wonderful theme experience to the players over...
IGT Shamrockers Eire To Rock Free Slots Game Gui... IGT got in sync with modern players needs when they released Shamrockers slot machine. It is a cool 5 reeled machine that features 20 fixed paylines. It is musi...
Balloonies iPad Pokies Machine Review & Fre... Would you mind a trip down memory lane? Of course you wouldn’t. Remember balloons and how elated you felt playing with them in your toddler days. Nowadays, kids...
NextGen Tianlong Slots Game Review The Dragon is a sacred symbol in the oriental way of culture because it is thought to be lucky for the people. This iPad slot machine has been developed jointly...
Top Spot Barcrest Slots Free App Top Spot is an XOX themed iPad slot game developed by SG Interactive and it's from the Barcrest pokies studio. This online slot machine app does not differ much...
Diamond Empire Microgaming Slot Game Guide Diamond Empire is a classic online slot machine that comes from the Microgaming company. As is the norm with classic slots, players looking to play Diamond Empi...
Aristocrat 5 Dragons Gold Max Free Slot Game Aristocrat Gaming software developers have released several slot machine games in the ‘5 Dragons’ series. The 5 Dragons Gold Max game is one that comes with bet...
Hula Nights Free Barcrest Slots App Hula Nights is a Hawaiian themed slot game which comes from the SG Interactive Barcrest stable of must play games. In this iPad slot game, players get to take a...
Tags: Dazzle Me free slots, NETENT android slots free, NETENT free pokies, NETENT iOS free slot app, NETENT ipad pokies free, NETENT iphone pokies free, NETENT iphone slot free, NETENT pokies app free, NETENT slot app free, NETENT social pokies, NETENT social slots. NETENT android pokies free,