Jungle Explorer powered by Novomatic is an online slot machine that comes with an adventure theme. Players playing this game will be virtually transported to a jungle where only the fit and the strongest will survive and win some nice payouts, well hopefully.

As such in any adventure style slot machine, the player’s resolve, fight and determination are of critical importance on the reels. To start one’s adventure in this game, players simply need to set in motion the game’s five reels that come with 20 paylines. It’s sort of an Indiana Jones style knock off of sorts, if you like this game you should take a look at the Action Jack slot. 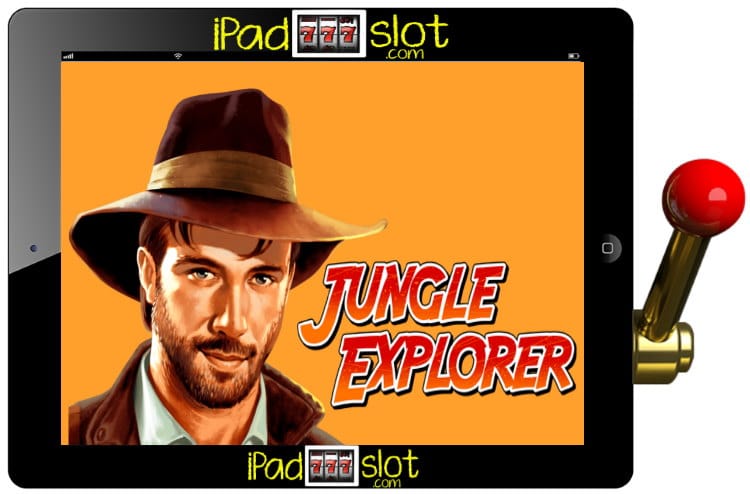 A jungle landscape provides the background graphics to this iPad compatible slot machine. The reel section is covered by a patterned brown wall.

When spinning the reels of Jungle Explorer, players will encounter the following symbols on the reels: the male explorer, the female explorer, golden statue, jewellery and traditional poker symbols. 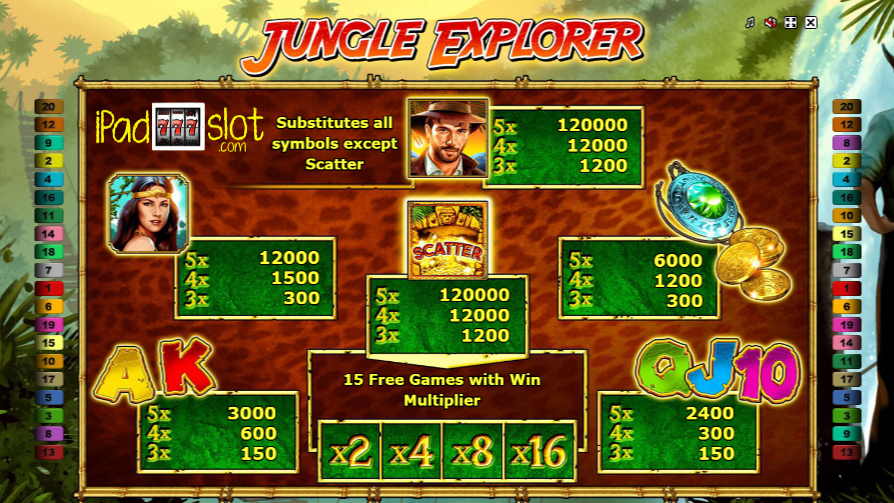 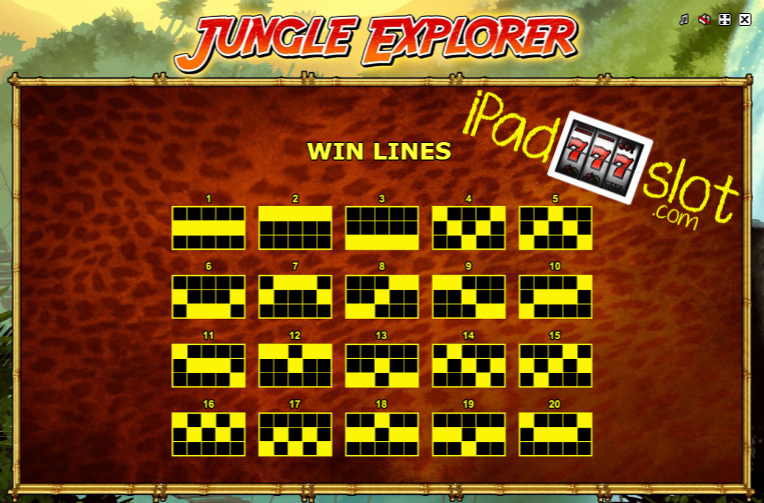 Jungle Explorer is an entertaining and captivating free pokies machine that great to lovers of adventure-themed slots both low rollers as well as high rollers. Out of a 10 point rating, this online slot machine gets an 8.2 points rating in our Novomatic free slot guides. 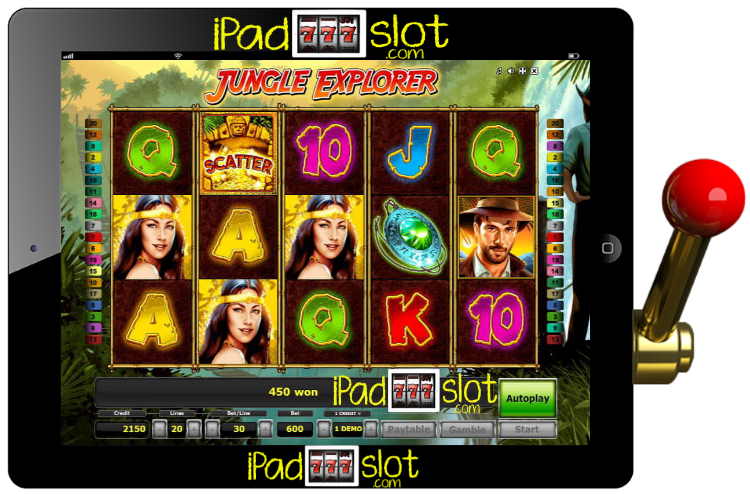 ** Please NOTE – It’s your lucky day as the Novomatic Jungle Explorer slot game or similar pokies might be available to play online for free or real money casino action on your iPad, iPhone, Android, Windows device with or without an app, or on your PC or Mac. Just take a look at our FREE games page here. **

Sushi Bar Betsoft Free Slots App The Sushi Bar slot machine game from Betsoft is one-of-a-kind creation from the creators, Betsoft are known to provide great slot payouts for players. The game ...
Agent Jane Blonde Returns Free Microgaming Slot Agent Jane Blonde Returns is a branded online slot machine released in early 2019 it comes from the Microgaming company. This is the sequel to the original and ...
Fat Choy Choy Sun Online Slot There is a saying which states that too much of anything is bad. Ardent believers of this saying state that too much of food can be a bad thing – well, this is ...
Scarab IGT Slot Game Free Play Guide Scarab is an online slot machine which comes from the IGT company. If like games like the Cleopatra from IGT or Aristocrats King of the Nile and Queen of the Ni...
Orange is the New Black Free Online Slots Game G... Orange is the New Black is a hugely popular Netflix TV series that has been running since 2013. This comedy drama series is rated a big 8.3 on IMDb, we get to s...
Cosmic Fortune iPad Slots Review Cosmic Fortune is the newest iPad slot to be released by NetEnt and it is surely a great game to play for real money. The game is based on an alien invasion and...
Champion of the Track iPad Slots Review Champion of the Track is a stunning iPad game from Net Entertainment. The game offers 30 paylines and can be played for great bet amounts that range from bets o...
Barnyard Bonanza by Ainsworth Free Play Guide Are you ready to explore an action-packed iPad slot game that features the primary theme of a bustling animal farm? Well, if yes then "Barnyard Bonanza" will fu...
More Chilli Slots app by Aristocrat Free Play Ve... More Chilli is another exciting free iPad slot game app that is developed by Aristocrat Technologies. This pokies game represents the classic theme of Mexico an...
Cash Coaster IGT Slots Free Play & Review The Cash Coaster Slot gives you a unique day at the amusement park, this IGT slot game is inspired by an old wooden styles coasters which are among the few rema...
Crazy Cows iPad Slot Game Free Preview The barnyard is full of action and players will be sure to collect some great payouts from Crazy Cows by Play’n Go. This iPad slot game is super exciting and wa...
Pharaoh’s Fortune Slots by IGT Free Play Guide Pharaoh’s Fortune is one of IGT’s premier classic casino games based on the ancient Egyptian culture, and history of the country featuring the times of sphinx a...
Big Win Goldmine Slots App by Ainsworth This Ainsworth powered iPad compatible slot is all about amassing wealth of the gold colour variety and we all love game themes along these lines that's for sur...
Konami Fortune Stacks Free Play Review Fortune Stacks is an exciting free iPad slot game that is developed by Konami and it represents a Chinese cultural theme. For example, this slot game features v...
Bunny Eggs IGT Slots Game Guide IGT brings us this Easter themed slot where some cute little bunnies offer you a set of yummy Easter eggs, also some impressive rewards can be had while on your...
Disco Spins iPad Slot Game Free Play & Revi... Put on your bright clothes and take a trip back in time too enjoy the 80's era with Disco Spins, an iPad slot created by Net Entertainment. This game is fully t...
12 Awesome Free & Real Money Bally iPad, iP... Players looking to have a spin on Bally slots can expect to come across Asian themed, African themed, nature-themed, aquatic themed, ancient mythology themed, r...
The Love Guru Online Slots Game Guide The Love Guru is a themed video slot that is presented by iSoftBet. This game is based on a popular movie from 2008 starring Mike Myers as Guru Maurice Pitka an...
Frozen Inferno WMS Casino Slot App Frozen Inferno is an SG Interactive powered Williams iPad slot game which combines two things that do not generally mix in the ‘conventional’world i.e. ice and ...
NETENT Guns N’ Roses Free Slots Game Guide Guns N' Roses is a Net Entertainment powered branded online slot machine that is awesome to enjoy on ipad, iPhone or Android devices. The game pays tribute to t...
Tags: Jungle Explorer Free Slots, Novomatic android slots free, Novomatic free pokies, Novomatic iOS free slot app, Novomatic ipad pokies free, Novomatic iphone pokies free, Novomatic iphone slot free, Novomatic pokies app free, Novomatic slot app free, Novomatic social pokies, Novomatic social slots. Novomatic android pokies free,