Pixies of the Forest, the slot game from IGT shall take the players to a fantasy-filled world where pixies rule. The game gets 5 reels and 99 pay lines for the players to win more.

The game gets the unique trademarked IGT Tumbling reels feature and Free Spins rounds to bring in a lot of fun to the players. The RTP (depending on the version) is set anywhere between 95.00% and 97.90%. 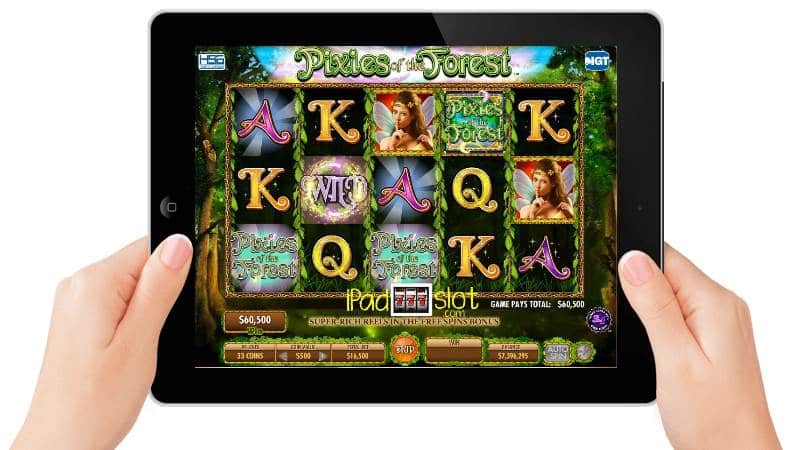 ** The must play Pixies Of The Forest IGT slot machine game can be enjoyed for free social gaming enjoyment or real cash money wins today on an iPad, iPhone, Android, Windows OS device, PC or Mac. Learn more – at our online casino guides. **

The game of Pixies of the Forest is set in a dense forest and that is where the mythical creatures live. The cute pixies flutter around and spread magic all around. The game offers the players to bet as little as 33 coins for 99 pay lines. 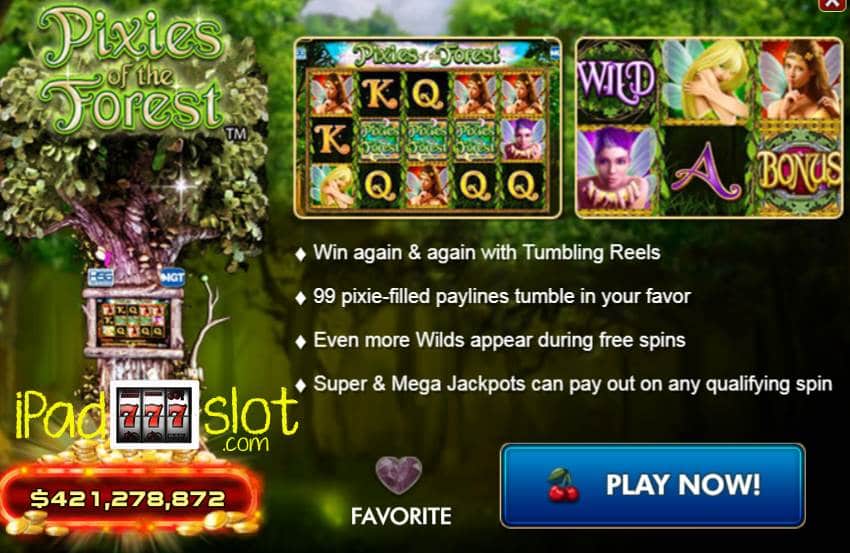 Pixies of the Forest game gets three pixies as symbols and logo of the game besides the poker cards and the Wild and Bonus symbols separately.

The game’s theme is based on the pixies in the forest and hence, they would be the top symbols on offer. 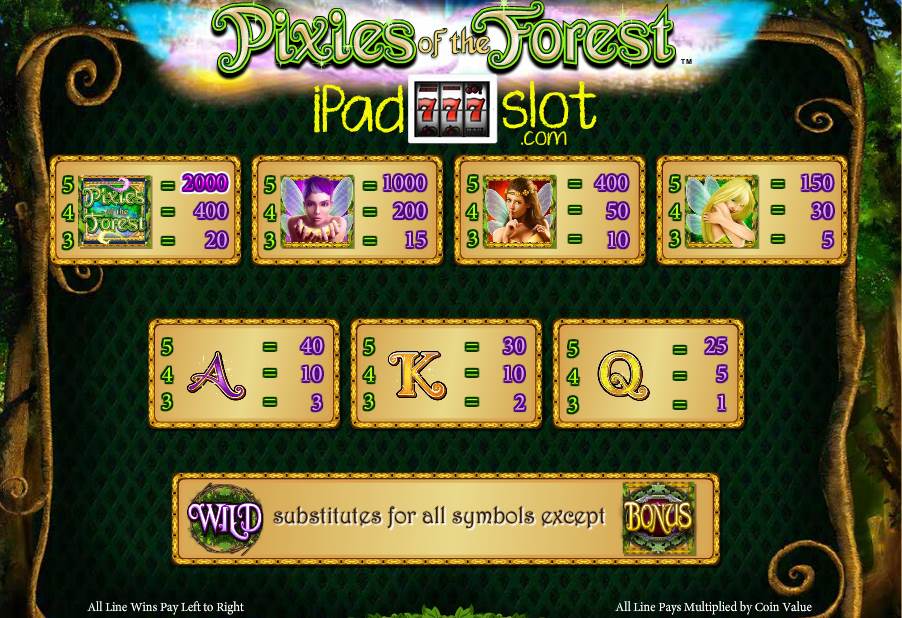 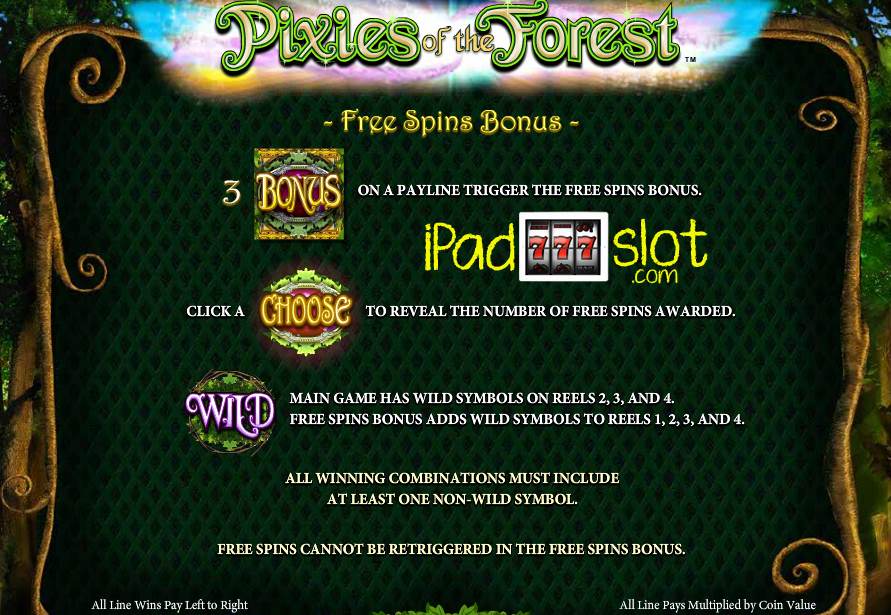 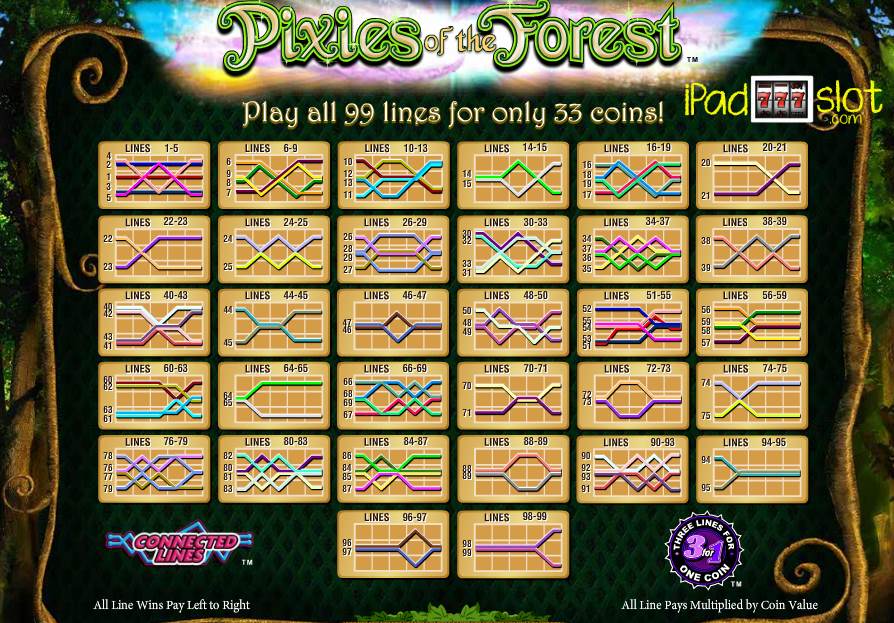 Summarizing Pixies of the Forest

Pixies of the Forest game has reels and symbols that offer free spins and more. The game is ideal for those who like interesting features and more.

Pixies of the Forest is rewarding and though there are only a handful of symbols, the game’s game plan with features make it a treat and worth the time on this iPad slot game. We rate it 7.4 from 10 in our game guide.

Secrets of the Forest Slots Nice Win Below

Fairy Queen Novomatic Free Slot Game Guide Slots offer players an opportunity to escape the daily struggles of the world and find comfort in a virtual world where everything is perfect and there are no s...
The Big Easy IGT Slot Game & Guide Americans will have an easy time recognising what this slot game is based upon. However, to impart non-Americans with knowledge on what they may not have known,...
Dancing Drums Shuffle Master Free Slot App Dancing Drums is a exciting and colourful Asian themed iPad slot game app from the SG Interactive stable of Shuffle Master games. With the symbolic red and gold...
Preview of the Flowers NETENT iPad Slots Game With Flowers, iPad players will enjoy a flowery themed game that is packed with features. The game from NETENT is fun in free play and a real money version and ...
Dollar Eagle Slot Game Free Play Guide Dollar Eagle is an free online slot machine which comes from the Aristocrat company. This online slot fuses two themes i.e. an animal and wealth theme, it's a b...
Fire Wolf II Free AGS Slot Game Guide The AGS powered Fire Wolf II is a sequel to the highly popular Fire Wolf slot. Just like its predecessor, this game can be described as an awesome release. If y...
Fortune Falcon Slots app by Ainsworth Review Players looking to play this game can do so in either one of two modes, there is a progressive mode in which the player stands to hit a highly lucrative Platinu...
Rainbow Riches Free Barcrest Mobile Slots App This SG Interactive Barcrest powered slot game stays true to its title, well mostly as long as you get a wee bit of Irish luck of course:) The game is inspired ...
Novomatic Lucky Lady’s Charm Free Slots App Lucky Lady’s Charm is a classic themed iPad slot game from the Novomatic stable of exciting mobile compatible slot machines. The game is one of the very first s...
Candy Bars IGT Slots Free Game Guide As one can deduce from the slot’s title, this IGT powered game is all about candy. The game’s background, the symbols on the reels and even the background sound...
Queen of Atlantis Slots Free Play Version Its time to dive deep into the ocean waters in this five reel Aristocrat powered iPad slot. Players playing this slot game are forced to enter into the ocean as...
Dolphin Treasure Gold Free Aristocrat Pokies Are you ready for more fun than the original Flipper themed pokies game loved by millions around the world? ok well check-out the Dolphin Treasure Gold slot mac...
Volts and Bolts Shuffle Master Free App Guide Just as you can expect by just reading the title of this SG Interactive powered slot game from Shuffle Master, your adventure in Volts and Bolts will be nothing...
Goldwyn’s Fairies Slot Game Guide Goldwyn’s Fairies Slot Game Review Goldwyn’s Fairies is a slot game released by Microgaming and it's pretty dam good overall. As players can probably deduce...
Smash the Pig Free IGT Slot Guide Smash the Pig is an online slot from IGT which more or less follows the same script as that espoused in the title. This is to say that when playing Smash the Pi...
Aristocrat 5 Frogs Game Free Play Guide Aristocrats 5 Frogs is a pleasant, exciting, and vivacious iPad slot game that features the classic oriental theme. If you're an absolute fan of Asian-themed sl...
In the Shells IGT Slots Game Guide This is another nautical themed slot game from IGT developed in the same genre as other water and ocean themed slots from the same developer. Quick Start Guide...
Buffalo Inferno Aristocrat Free Play Slot Game Aristocrat casino software developers have a vast range of classic themed online slot machine games. Their games are easy to play and they are built with elegan...
Siberian Storm Dual Play Game Review Siberian Storm Dual Play is an animal-themed slot machine game that features a unique theme of Siberian Tigers. IGT gaming has taken these types of genre very s...
SideWinder Microgaming Free Slot Game Guide SideWinder is a 5 reel online slot machine which comes from the Microgaming company. SideWinder Slot Game Fast Start Guide The title of this slot game derives...
Tags: IGT free app, IGT free iPad pokies, IGT free iPad slots, Pixies Of The Forest Free Slots,