The Hot Roll Super Times Pay iPad slot is a game which has been redesigned from its previous version by IGT. The game features a classic slot theme structure to give more access and scope of winning a big prize. The game contains a modest 20 paylines along with 3 reels and comes up with an astounding RTP from 94.97% to 96.07% at select IGT casinos.

Hot Roll Super Times Pay is a Vegas casino themed game, which contains regular card symbols from bar to 7 and all its relative variants. The structure of the game is to give out multiplier wins in most of the spins. 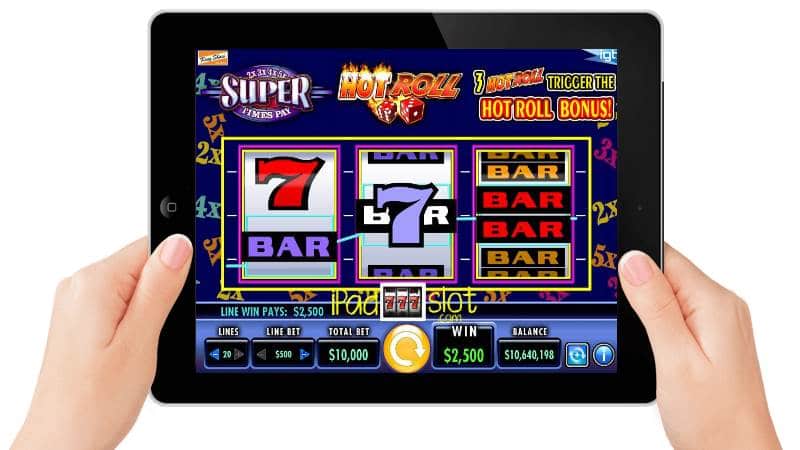 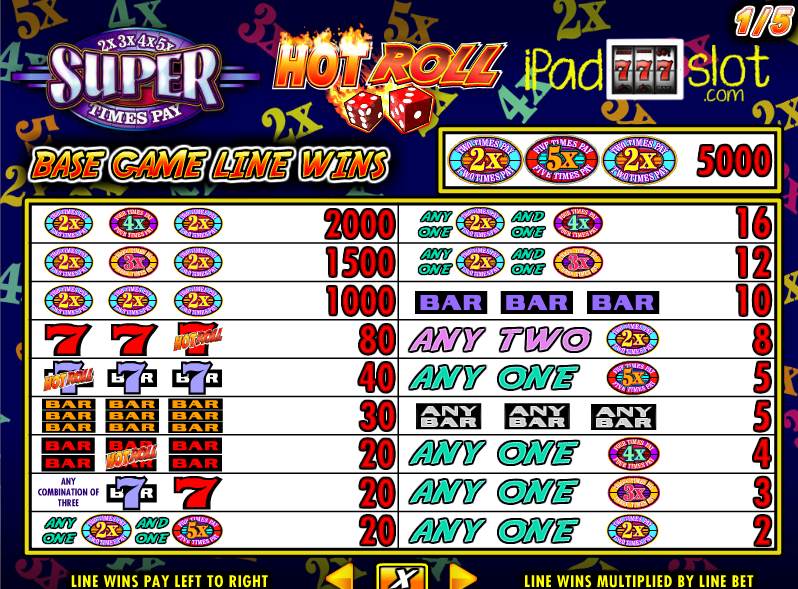 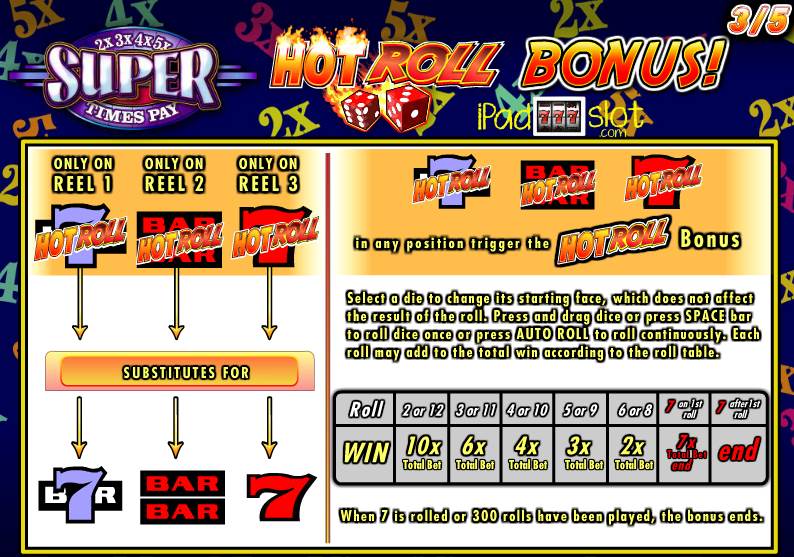 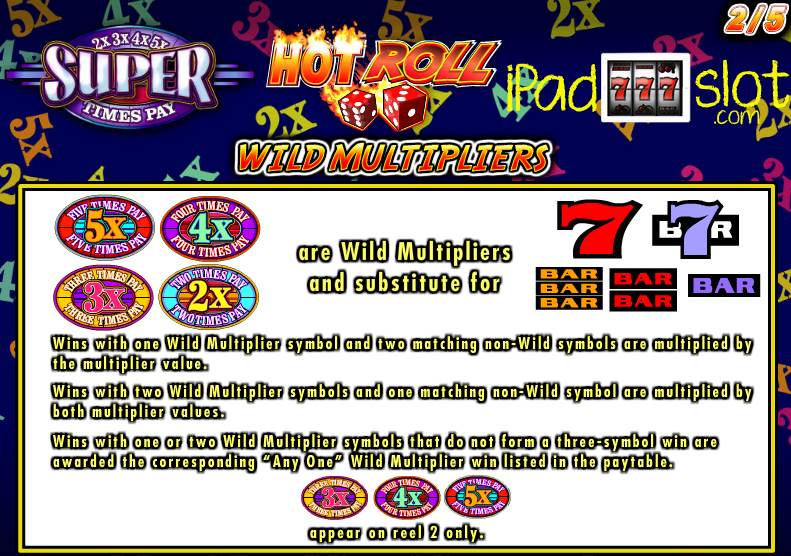 IGT’s Hot Roll Super Times Pay is a wonderful example of providing heavy payouts from a layout, which is meant to provide a meager winning pay in values. The real money players will have a very good time with features such as the hot roll bonus, which almost assures to payout on the higher side. The score we give this free IGT iPad slot is 7.6 from 10 available points.

Red Mansions Asian Themed IGT Slots App Guide Red Mansions is an Asian themed slot game from the IGT company. In this pokies game, players are taken on a virtual trip to the East where they get to view Asia...
Ladies Nite Online Slot Review Produced by Microgaming, Ladies Nite is an exciting game with heaps of vivid graphics when the girls get the party started! With a nightclub type of theme, the ...
Aristocrat Monkey King Free Pokies Game Guide Linked to the Lucky Fortune link progressive jackpot, you are bound to want to unlock one of the special features which give you the opportunity to win the ever...
Triple Cash Wheel Bally Android Free Slots App G... Triple Cash Wheel is a retro-themed Bally Android compatible free or real money slot game app from SG Interactive. While most retro themed games are all about s...
Aristocrat Polynesian Pearl Free Slots Guide Are you looking forward to try out a fun tropical themed game? Well, if yes, then this free iPad slot game will be quite apt for you. "Polynesian Pearl" is a...
Novomatic Jungle Explorer Free Slots Game Guide Jungle Explorer powered by Novomatic is an online slot machine that comes with an adventure theme. Players playing this game will be virtually transported to a ...
Book of Maya Novomatic Free Slots Game App Book of Maya is an Aztec themed slot game developed by Novomatic. This slot game traces the adventure of an ancient explorer who travelled the world in search o...
Reel Riches Fortune Age SG Slot Free Play Guide Reel Riches Fortune Age is an Chinese themed slot game which is part of the ‘Reel Riches’ slots series. Like other ‘Reel Riches’ slot games, this game is powere...
Rawhide Slots by Konami Free Play Version Rawhide is a western themed iPad compatible slot game from Konami which can be played for free or real cash at our select casinos. Though this game comes with t...
Double Happiness Pokies App from Aristocrat (FRE... Double Happiness is a bright and lively slot game designed by Aristocrat Gaming. This is a 5 reel and 25 pay-line online slot. The design is based on an Asian t...
Jinfu Long Online Slot Review There is thousands of oriental themed slots in the market, there are a few that manage to get everything right. One such game that makes the grade is the Playte...
Elephant King Slots by IGT Game Guide Elephant King is a awesome game made by IGT and is good to play on your iPad or iPhone from our casino guides. It was released in about 2017 ish' for online and...
Garden Party IGT Slots Free Game Guide This slot game from IGT is full of floral scenery. Lovers of flowers and and all things related will find Garden Party slot game from IGT appealing and entertai...
How to Play Guide Bloopers Slot by Elk Elk a casino game developer based in Sweden vouched not to release many casino slots but instead work on releasing a few quality games that will leave players a...
Family Guy Free IGT Slot Game App Guide Family Guy easily ranks as one of the most popular animated comedy sitcoms that have ever been produced since the year of 1999. Created by Seth MacFarlane the F...
Fortunes of Atlantis Aristocrat Free Mobile Poki... Fortunes of Atlantis is an free mobile pokies app game by Aristocrat that is inspired by the sunken city of Atlantis. This mythical civilization & its cultu...
Midnight Soiree Free IGT Slots Game Guide Midnight Soiree is an online slot machine which comes from the IGT company. This game comes with a masked ball theme and as such, players looking forward to try...
Sky Rider Golden Amulet Free Slots Guide Sky Rider Golden Amulet is a western themed iPad compatible slot game from Aristocrat. This game features elements from ancient Europe. The game features five r...
Safari Spirit Ainsworth Free Mobile Slot App Safari Spirit is an online slot game from Ainsworth which comes with a African wildlife theme. Players playing this online slot machine can expect to be virtual...
Wolf Queen Free AGS Slot Game Guide Just like most other AGS powered slots, this game comes with the cracker PowerXstream ways to win which means win lines consist of matching identical symbols fr...
Tags: Hot Roll Super Times Pay, IGT free iPad pokies, IGT free iPad slots,