If you fancy China and Orient themed free online pokies games, then you are going to love The Third Prince VS from Aristocrat Gaming. This new version has had significant updates, with beautifully animated dragons and lucrative bonus features like the VS Feature and the Jackpots on offer.

With high-quality graphics and smooth gameplay, this game works perfectly on mobile and PCs. It is fully optimized to be played directly through standard web browsers. The Third Prince slot has a playing grid of five reels and three rows and massive pay lines. Gear up and join the Battle at Heart of Vegas Real Casino Slots for total fun and some high payouts. 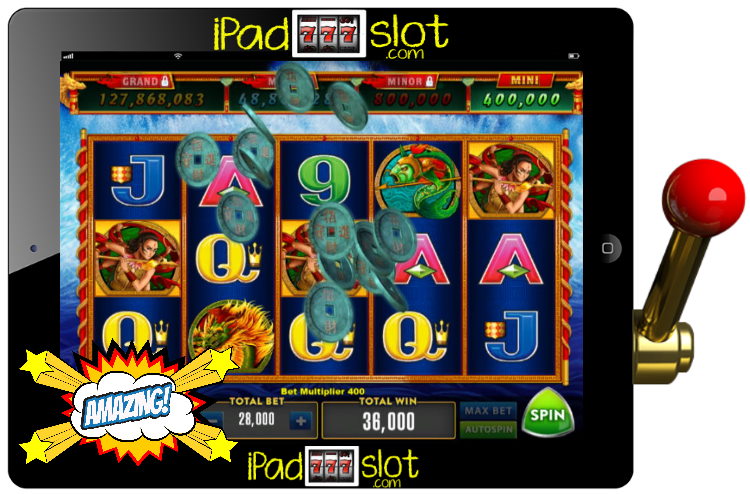 ** Many similar exciting games to Aristocrats The Third Prince VS slot machine are available to play for free on PC, Mac, iPad, iPhone, Android, Windows devices with no app downloads – Just take a look at our FREE games page here. **

The Orient cultures have inspired many slots, developers, including many from Australia’s best pokies machine maker Aristocrat Gaming. Their rich and deep-rooted cultures produce some of the best slot game themes, and the best example is The Third Prince VS.

This slot provides you the opportunity to join a battle filled where you will encounter different dragons, the fish army and the Third Prince himself, who is the hero of the game.

The reels also come with several traditional poker cards A, K, Q, J, 10 and 9. The general appeal of the game has been enhanced by the seamless animations and authentic sound effects.

With a standard format of five reels and three rows, massive 243 paylines, and symbols, you will find it simple to play The Third Prince online slot game. What makes this new edition to stand out is the VS feature which triggers the jackpots.

You will also find beneficial features like the Battle Pay to enhance your gameplay. Land three or more identical symbols on the reels to win a cash prize. The control panel is typical of Aristocrat pokies and is located on the bottom bar. 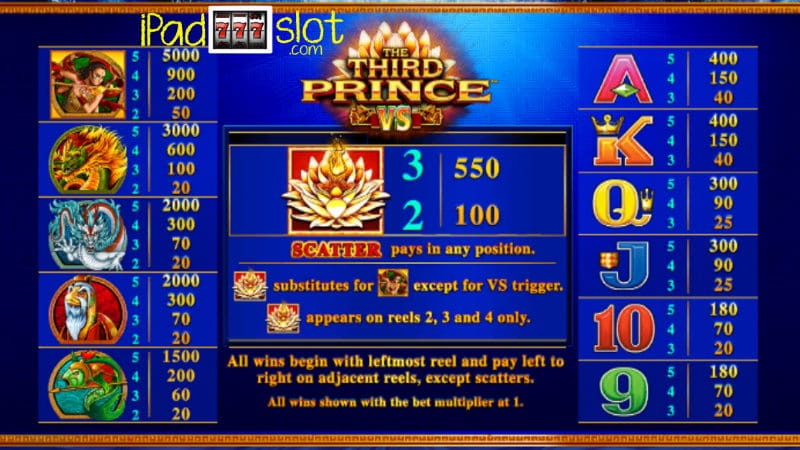 The Third Prince VS Slot Review 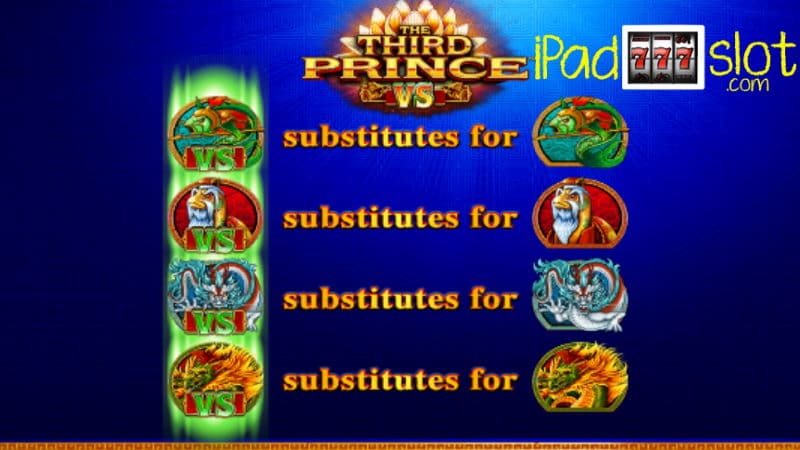 Dolphin Reef Pokies Playtech Free Play Guide This slot is just as good if not better that the free Dolphin Treasure iPad pokies app by Aristocrat.The Dolphin Reef game takes you on an adventurous journey i...
Diamond Chief by Ainsworth Free & Real Gami... Diamond Chief is an African forest-themed slot game from Ainsworth that is talk of the casino industry now. The slot game gets 5 reels, which is divided into 2x...
Candy Bars IGT Slots Free Game Guide As one can deduce from the slot’s title, this IGT powered game is all about candy. The game’s background, the symbols on the reels and even the background sound...
Action Ops Snow and Sable Free Microgaming Slot Action Ops: Snow and Sable is a futuristic slot game which comes from the Microgaming company. In the game  players are introduced to two female fighters who ar...
Aristocrat Heart of Vegas Free Slots Game Guide Vegas fun comes in all shapes and sizes but you can always envision the money hub as glitz, glam and 24/7 fun! The Heart of Vegas slot game depicts all of this ...
Sumatran Storm Slots Game Guide This is one of many IGT’s animal-themed slots. Sumatra is an island found near Indonesia where one can find a lot of tigers and other wild animals. The objectiv...
Cayetano Gaming Asian Riches Slots Game Guide Asian Riches by Cayetano Gaming is a classic example of how modern slot machine games has risen up the popularity charts with iOS players. The game, based on As...
Red Hot Wild Free Barcrest Slots Guide In recent times, 3 reel slots have lost their popularity a bit thanks to all the fancy games in the market with all the wiz bang graphics. However, SG Interacti...
Ainsworth Jade Emperor King Strike Free App Guid... Jade Emperor King Strike is a progressive slot game which comes from the Ainsworth stable of brilliant free and real money pokies machines. This Asian themed sl...
Jaguar Mist Free Mobile Pokies app by Aristocrat The Jaguar Mist mobile pokies app by Aristocrat Gaming is a popular online slot and is offered by Heart of Vegas. It isn’t very new in the market and is most po...
5 Dragons Deluxe Slots Free Play Guide If you really love Asian themed slot games, then "5 Dragons Deluxe" will be an appropriate game for you. This free or real money iPad slot game is totally inspi...
Celtic Queen Social iPad Slots Review Are you ready to discover a unique Aristocrat free iPad slot game with an interesting & innovative game theme on your iOS device? If yes, then get ready to ...
Lil Lady Free IGT Slots Game Guide IGT is a renowned casino gaming developer who is well-known for producing games with the most fun and light themes. One such themed game is the Lil Lady. This p...
Aristocrat Reel Sweet Stacks Free Play Guide Reel Sweet Stacks is an Aristocrat powered online slot machine which comes with a fairytale theme. Coming with a fairytale theme, Reel Sweet Stacks is, therefor...
Aristocrat New Year’s Treasure Free Slots Game New Year’s Treasure is an Chinese themed free slot game which comes from the Aristocrat stable. This game does pay homage to the colourful Asian New Year celebr...
Aristocrat Golden Groove Free Slot Guide Creativity and innovation have propelled Aristocrat to reach the dizzy heights of success that it now enjoys. Nothing exemplifies this more than the online slot...
Golden Jungle IGT Free Slots Game Guide Golden Jungle is an IGT powered slot and it's an awesome game overall. This slot comes with an Indian theme genre which is depicted by the symbols on the reels....
Rainbow Riches Free Spins Barcrest App The ‘Rainbow Riches’ series is one of the most popular slot series to come from the SG Interactive stable of Barcrest games. Adding on to the vast number of tit...
House of Cards Free IGT Slots Game Review For many people, politics is an entertaining game; if your view on politics resonates with this assertion, then you are going to find this IGT powered iPad slot...
Lucky Larry’s Lobstermania 3 Free Slots Ga... Luck Larry's Lobstermania 3 is the third slot game in the series. Like the previous Lobstermania games, this awesome iPad and iPhone compatible slot is develope...
Tags: Aristocrat android slots free, Aristocrat free iPad slots, Aristocrat free pokies, Aristocrat iOS free slot app, Aristocrat ipad pokies free, Aristocrat iphone pokies free, Aristocrat iphone slot free, Aristocrat pokies app free, Aristocrat slot app free, Aristocrat social pokies, Aristocrat social slots. Aristocrat android pokies free, Aussie free pokies, Aussie pokies, The Third Prince VS,