Themed based games are usually an interesting illustration of the nature of the game. The Prowling Panther iPad slot by IGT is a jungle based theme game with the marvelous soundtrack based on a wild animal theme along with the suspense music in the form of drums.

The theme followed in this slot game is based on lush green environment along with the species living in the jungle especially the Black Panther. 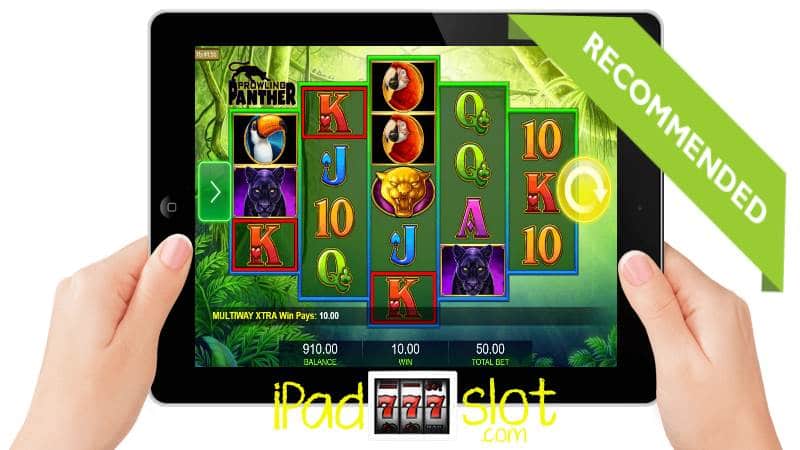 ** The Prowling Panther IGT slot machine may be available to play for free or real bucks on your iPad, iPhone, Android, Windows device, PC or Mac. Just take a look at our online casino guides here. **

This slot game comes with 5 reels and the interesting thing is that there are 720 ways to win. The interface of the game is very easy to understand overall so even granny will love this slot.

The Panther is the most wanted image on the reels of this game. You’ll find the prowling panther in a jungle setting, with trees, foliage and vines giving the backdrop a predominantly green look, the backing to each symbol also in green, although slightly darker.

You’ll find a toucan and bird, a parrot as well as playing card symbols on the reels, but the two panther symbols are the most striking and creates a fabulous look. There is the black panther, the symbol showing a close up of his face, although with the look in his eyes you wouldn’t want to get too close in the real world 🙂 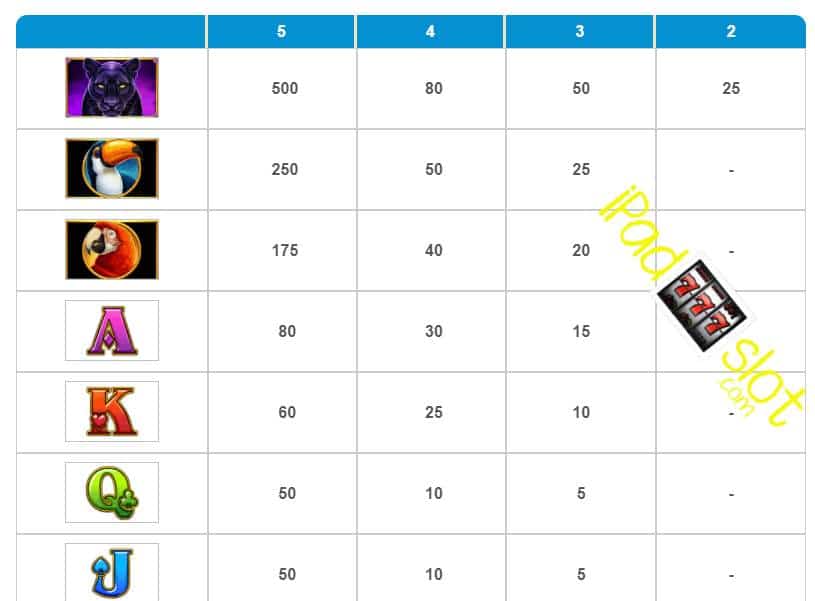 On the reels there are some theme based symbols like the black panther, golden panther, and some birds. Other low value symbols are commonly used in the game is the likes of Aces, King, Queen, Jack and 10.

Base game and bonuses

This slot game does look an adventurous at times and with just a free spins feature and no feature outside of the reels or even a jackpot to what the appetite, the excitement level remains a little too steady.

Overall this slot game is good and interesting with respect to its attractive music and theme. I will give 7.5 out of 10 points to the Prowling Panther an online IGT iPad slot game that is available from our IGT casino reviews.

4 Reel Kings Novomatic Free Pokies Game Guide 4 Reel Kings is an online slot machine which comes from the Novomatic stable of fine slot machines. This game comes with a retro fruit theme. As such, when spin...
Wild Panda Free Aristocrat Pokies app The great and fun-loving Panda is viewed as a symbol of good luck in China and Asia. To the whole world; it is a gentle furry creature that needs to be treasure...
Day of the Dead by IGT Free Play Slots & Re... The "Day of the Dead Slot" game is a compelling Mexican Halloween-themed IGT social iPad slot that can be played at the Double Down Casino. The game theme perfe...
Surftastic Free Aristocrat Pokies Game If you are you a fan of the water or surfing then you are going to love the Surftastic slot game from Australia’s best pokies provider aka Aristocrat Gaming. Th...
Royal Spins by IGT Free Slots Guide The light hearted fruity slots theme bring an element of character to what one can imagine royalty to have been like back in history. Another fine free pokies g...
Novomatic Lucky Lady’s Charm Free Slots App Lucky Lady’s Charm is a classic themed iPad slot game from the Novomatic stable of exciting mobile compatible slot machines. The game is one of the very first s...
Aristocrat Peacock Riches Free Slot Game Guide If beauty, the orient and money make the perfect combination, then Aristocrat has developed the perfect 5 reeled video slots game for you to play for free onlin...
Greenluck Free Slot Game & Guide St Patricks Day is a big celebration in Ireland and also within Irish communities in all parts of the world, the festival involves a lot of eating, drinking, da...
Aristocrat Walking Dead Free Slots Guide Update: We now have a free play demo version here of The Walking Dead online slot machine. Undoubtedly, The Walking Dead is one of the most famous zombie-bas...
Lucky Lady’s Charm Deluxe 6 Free Slots The Lucky Lady's Charm is one of the most popular iPad slot series in the gaming market, this Novomatic slot is the latest edition and the third in line thuus f...
Timber Wolf Deluxe Free Slots Guide Aristocrat in this slot game brings you a game which takes place inside a huge scary forest full of vicious wolfs and tigers. Set in the middle of nowhere in a ...
Titans of the Sun Theia iPad Pokies Review and F... Titans of the Sun Theia is an incredible iPad pokies game that's powered by Microgaming. It was released in October 2015 and is centered on Greek mythology, so ...
Golden Peach by Aristocrat Free Slots Guide If you are an avid fan of Aristocrat free iPad slot games, you would have taken virtual trips to various destinations on the game reels already at Heart of Vega...
Dolphin’s Pearl Novomatic Free Slot Guide As themed into many games adventurers when looking for a treasure trove tend to favour voyages of discovery into unknown waters. So sometimes, diving deep into ...
12 Slot Apps to Play Free & Real on iPad, A... You will find that there are hundreds if not thousands of mobile slots out there. To narrow down your search when looking for great slot games to play with or w...
Lucky Angler a Snowy Catch iPad Slots Review Lucky Angler a Snowy Catch is a great slot to enjoy on your iPad or iPhone and the game is based on an ice fishing journey. Get ready to break the ice and reel ...
Leapin’ Leprechauns Barcrest Game App Leapin' Leprechauns is part and parcel of the Rainbow Riches genre of iPad games, a game series developed by SG Interactive in the Barcrest Studio. This online ...
Cash of Kingdoms Free Microgaming Slot Cash of Kingdoms is an online slot machine which comes from the Microgaming company. This game comes with a fantasy medieval theme and as such, it’s a great slo...
101 Lions The Best Free Lions Themed Slots Game 101 Lions by Intervision Gaming puts the spotlight on our very own king of the jungle right from your iPad. With stellar imagery that evokes the exquisite beaut...
Wild Tooth Free Slots Game Guide Wild Tooth is an animal themed slot game from Aristocrat. The game takes the player right inside a huge forest with some tall mountains. For spotting animals of...
Tags: IGT free app, IGT free iPad pokies, IGT free iPad slots, Prowling Panther Slots,