Gold Lab is a science-based free iPad slot game developed by Quickspin. This is 5 reel and 25 pay-line iPad pokie. Players are taken into a scientific laboratory where they are able to mix chemicals to form new substances. It is a colorful slot with quality graphics and sounds. The design is engaging and full of fun.

There are some adorable cartoons representing scientists, colorful gemstones and portions. The Golden bonus feature comes with re-spins and wild transformations. Players are awarded with up to 7 re-spins. Maximum wins happen during the re-spin features after filling the whole screen with wilds. This game is available to play on PCs, laptops, tablets and smartphones.

Gold Lad is designed with a simple layout featuring a grid of 5 by 3 reels and 25 pay-lines. A lab is used as the environment of the game. Players are taken into a clean modern lab where they meet crazy scientists awaiting the results of their experiments. There are colored gemstones and beakers with chemical portions. Impressive graphics, cartoons and sound effects have been applied to the game. These make the game more engaging and entertaining.

Symbols featured in the game have a chemical touch and are little quirky. These are four different colored beakers and 5 different colored gemstones. The beakers exist in colors of purple, red, orange and green. The gemstones include a green octagon, a purple pentagon, a blue triangle, a pink hexagon and a red, circular ruby. The yellow icon is the wild symbol of the game used to activate the free spins round. The scatter of the game is the red beaker with a surrounding golden plate used to activate the bonus round. 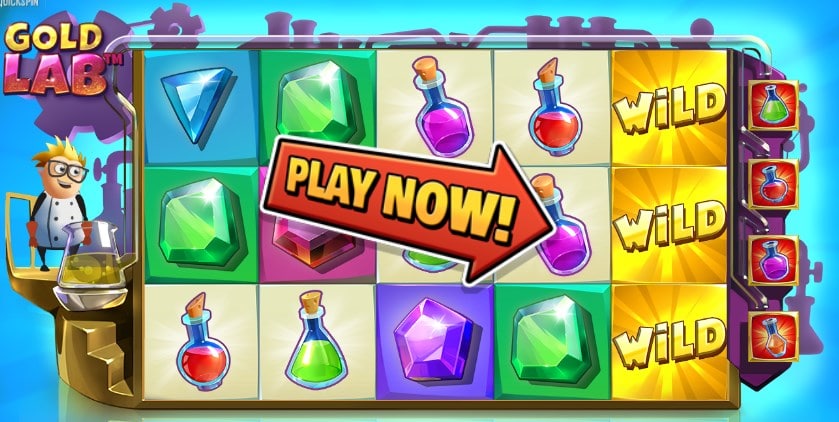 Players are provide with 25 pay-lines which cannot be customized in any way. The minimum and maximum bet amounts are 0.1 and 100 respectively. This wide range is suitable for both low budget players and those with a bigger bankroll. The most rewarding symbol is the yellow wild which awards 8x the stake after landing 5 of them on a pay-line. Players can also use the auto-play feature to spin larger amounts.

Golden bonus round is activated by landing three or more scatter symbols on reels 1, 3 and 5. Players are awarded with 4 re-spins. During this round, any beaker symbol turns wild and becomes sticky throughout the bonus game. Players can win 3 additional re-spins by collecting more portions. This is where the four portions displayed on the right, come to play. Hitting any of the red, green, purple or red portions surrounded by a red and golden background during re-spins forces them to be highlighted on the right side. Symbols with same color and those without, transform into wilds for the remaining re-spins.

This is very entertaining game for a scientific slot. Players are allowed to put their scientific knowledge into practice while raising their wealth status. Gold Lab is designed with creative special features including a fun theme.

The games simple design makes it easy for players to learn and play. A wide betting range allows both low budget players and high rollers to enjoy the game. It incorporates a soundtrack that motivates players to mix their chemicals wiesly :). This game is all about the Golden bonus which is pretty simple and rewarding.

Prowling Panther Free IGT Slots Game App Guide Themed based games are usually an interesting illustration of the nature of the game. The Prowling Panther iPad slot by IGT is a jungle based theme game with th...
Anchorman the Legend of Ron Burgundy Free Slots ... This slot developed by Bally is a branded game based on the popular comedy movie series directed by Adam McKay starring Will Ferrell as Ron Burgundy the lead ne...
Dungeons and Dragons Treasures of Icewind Dale S... Icewind Dale is a mystical snowy land with hidden treasures. It forms the setting for IGT’s Dungeons and Dragons Treasures of Icewind Dale slot machine. In this...
Cosmic Fortune iPad Slots Review Cosmic Fortune is the newest iPad slot to be released by NetEnt and it is surely a great game to play for real money. The game is based on an alien invasion and...
Dream Catcher Indian Dreaming Pokies Styled Free... DREAM CATCHER FREE SLOT GUIDE Native Americans, in general are superstitious people by nature. Thanks to oral as well as written traditions from history, peopl...
Silver Lion by Lightning Box Free Play Guide Silver Lion is an  slot game developed by Lightning Box. This is a 5 reel game that offers 1024 ways of winning. Players are provided with an opportunity to tak...
Nordic Heroes by IGT Slots Game Guide Nordic Heroes is a unique game developed by IGT, which focuses on fantasy warfare along with having a layout, which closely resembles pokers. The game layout is...
Arctic Valor Free Microgaming Slot Arctic Valor is an game which comes from the Microgaming company. This online slot comes with a fairy theme which is blended with an arctic vibe. Quick Start A...
Prosperity Dragon Ainsworth Free Slots Guide Prosperity Dragon is a free iPad slot developed by Ainsworth. The theme of the game is based on East Asian culture. It is a 5 reels and 100 pay-lines slot packe...
Legend of the Pharaohs Free Barcrest iPhone Slot... Legend of the Pharaohs is another Egyptian themed slot game from SG Interactive as you would probably deduce from the title. Worry not about monotonous boring s...
Money Heat by Ainsworth Free & Real Play Gu... One more amazing creation from the developers at Ainsworth is a 5-reel iPad and iPhone slot game with 30 pay lines. Apart from providing profitable wins, the ga...
Siberian Storm by IGT Slots Game Guide Siberian Storm is an animal-themed slot machine game that features a unique story line of majestic Siberian Tigers. IGT gaming has taken these types of genre ve...
Ellen’s Road to Riches Free Slot Game App Below we talk about just a few of the features of this app, this is a really cool social casino set-up and we review some of the best features of the app. In ca...
Book of Ra Novomatic Slots Game App Review Book of Ra is an Egyptian themed iPad slot game which was has been developed by Novomatic. This game is based on the adventures of an explorer who visited Egypt...
Get Clucky Free IGT Slot Review & Game Guid... Play your way through an eggciting IGT gaming experience which has been designed on 5 reels and 20 paylines which sports a number of fantastic features includin...
Acorn Pixie Slots Free Play Guide This slot game is very good and well worth a spin on your iPad or iPhone for free or real dosh from our reviewed online casinos. The pixie in the game will use ...
Best Free or Real Money Mobile Slots & Poki... If you enjoy playing slots and love watching movies, then what could be greater than mixing the two together in the year of 2021, we also included a great serie...
Jewels of India Free High 5 Games Slot Guide The land that lies between the Arabian Sea and the Bay of Bengal is home to vast riches as well as fertile lands. That land, of course, is modern-day India. So ...
Castaway Pirates Free Ainsworth Slot Game Guide Castaway Pirates comes from the Ainsworth company. As players can deduce from the title of this online slot machine, Castaway Pirates comes with a pirate theme ...
1421 Voyages of Zheng He Free IGT Slot Game Guid... The number eight is commonly considered to be lucky in the Chinese culture, so that’s why it’s referenced multiple times inside the game. Anyways, here are some...
Tags: Gold Lab, Quickspin iPad pokies, Quickspin iPad slots,